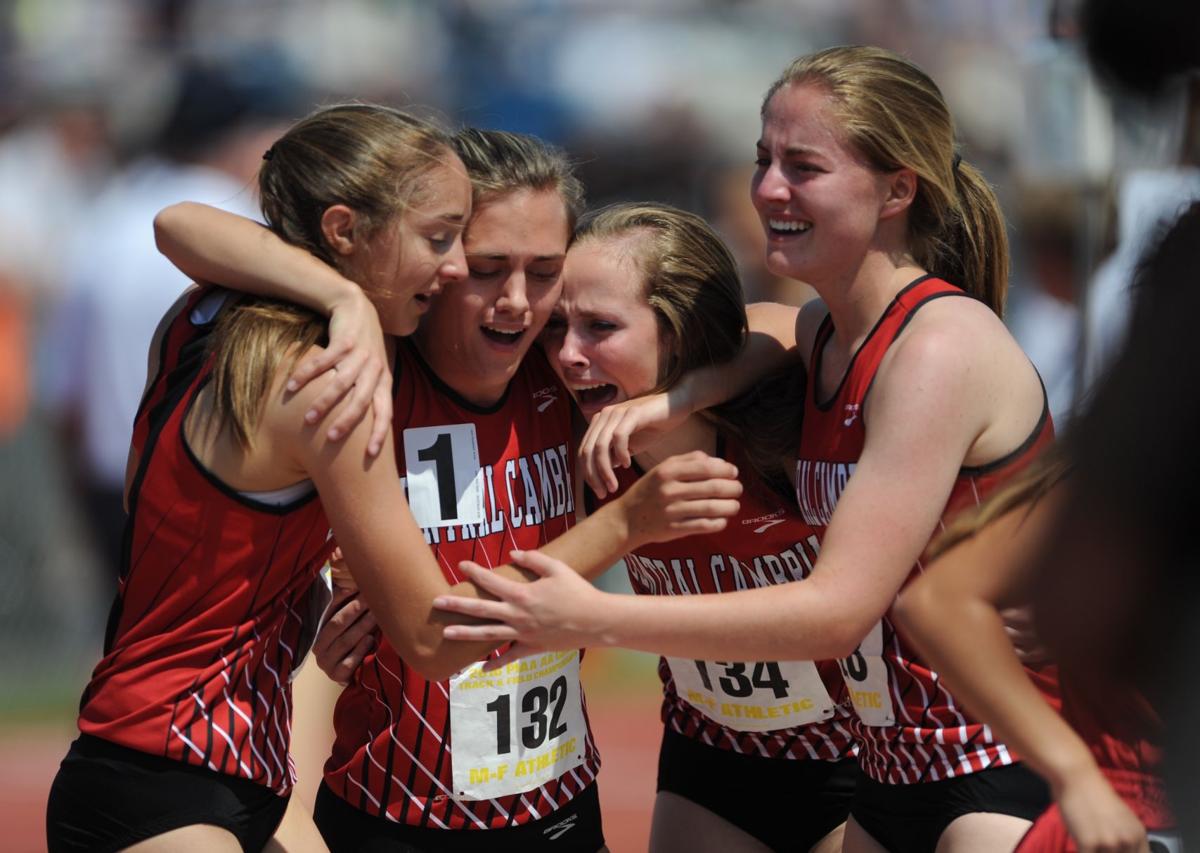 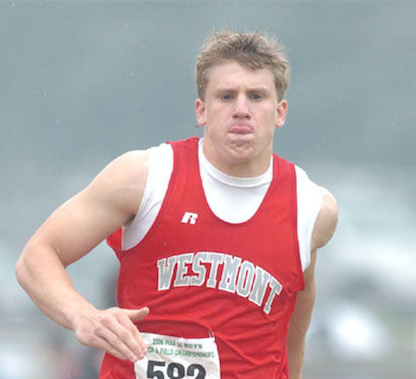 Westmont Hilltop's Brad Kanuch competes during the triple jump, where he earned a silver medal. 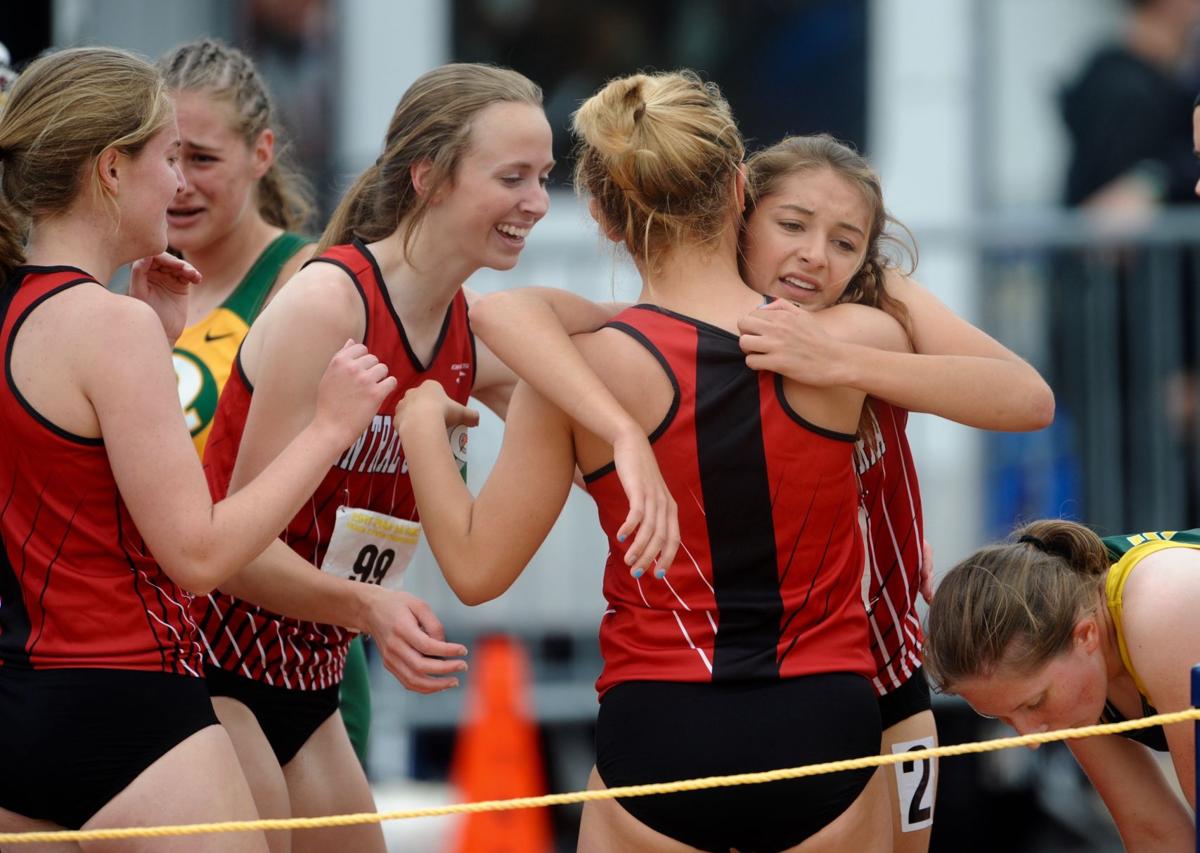 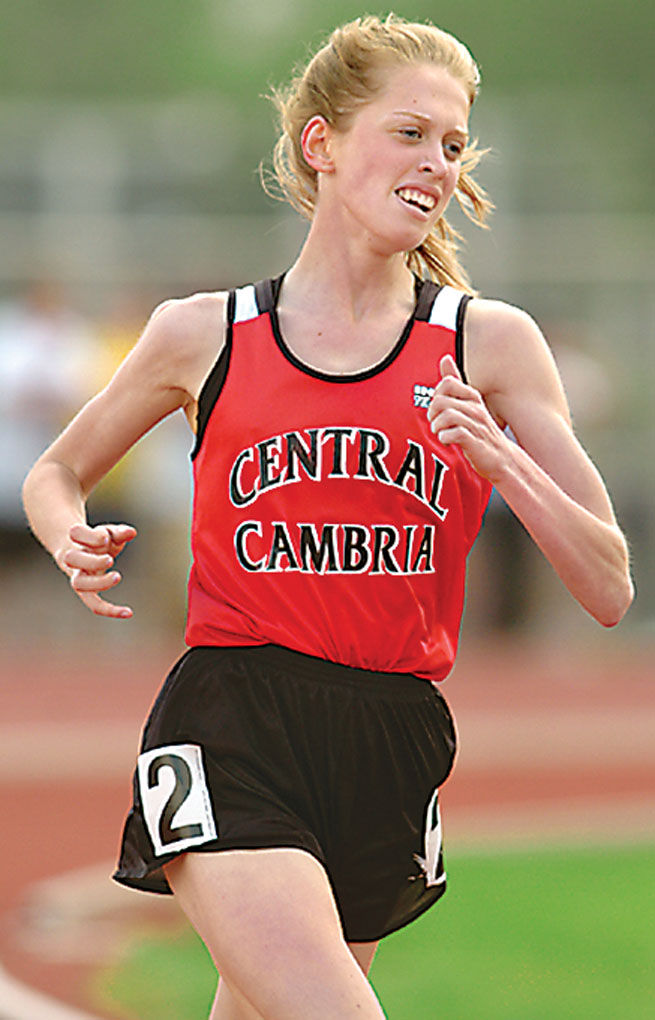 Central Cambria’s Carly Seymour competes in the 3200-meter run during the PIAA Track and Field Championships in Shippensburg on Saturday. 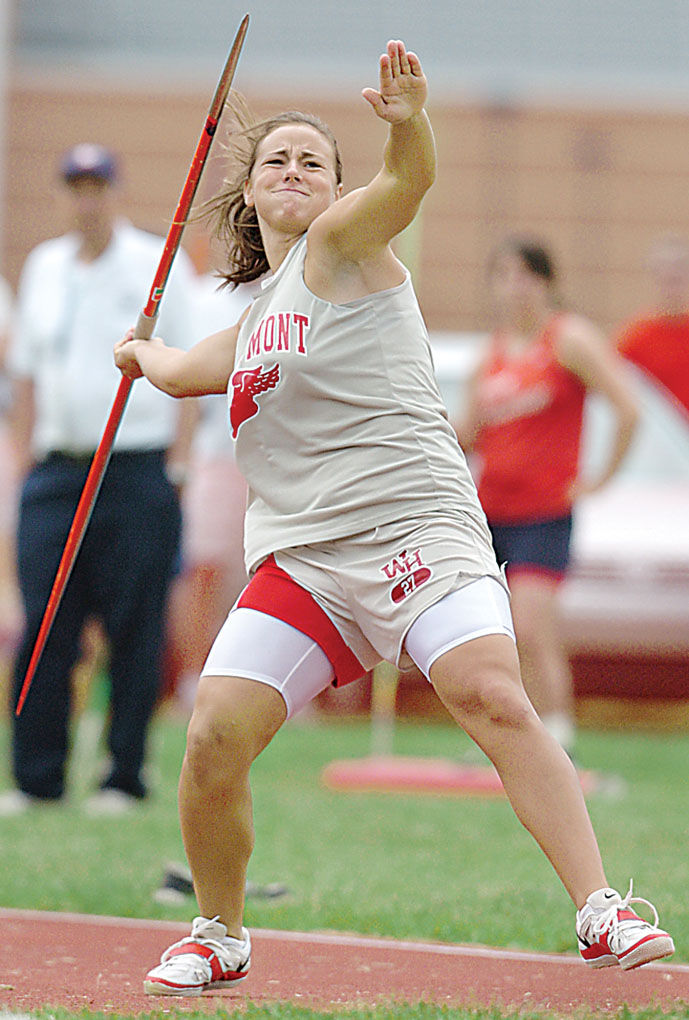 Westmont Hilltop’s Karlee McQuillen throws the javelin during the PIAA Track and Field Championships in Shippensburg on Saturday. The junior won the Class AA title and set a state record. 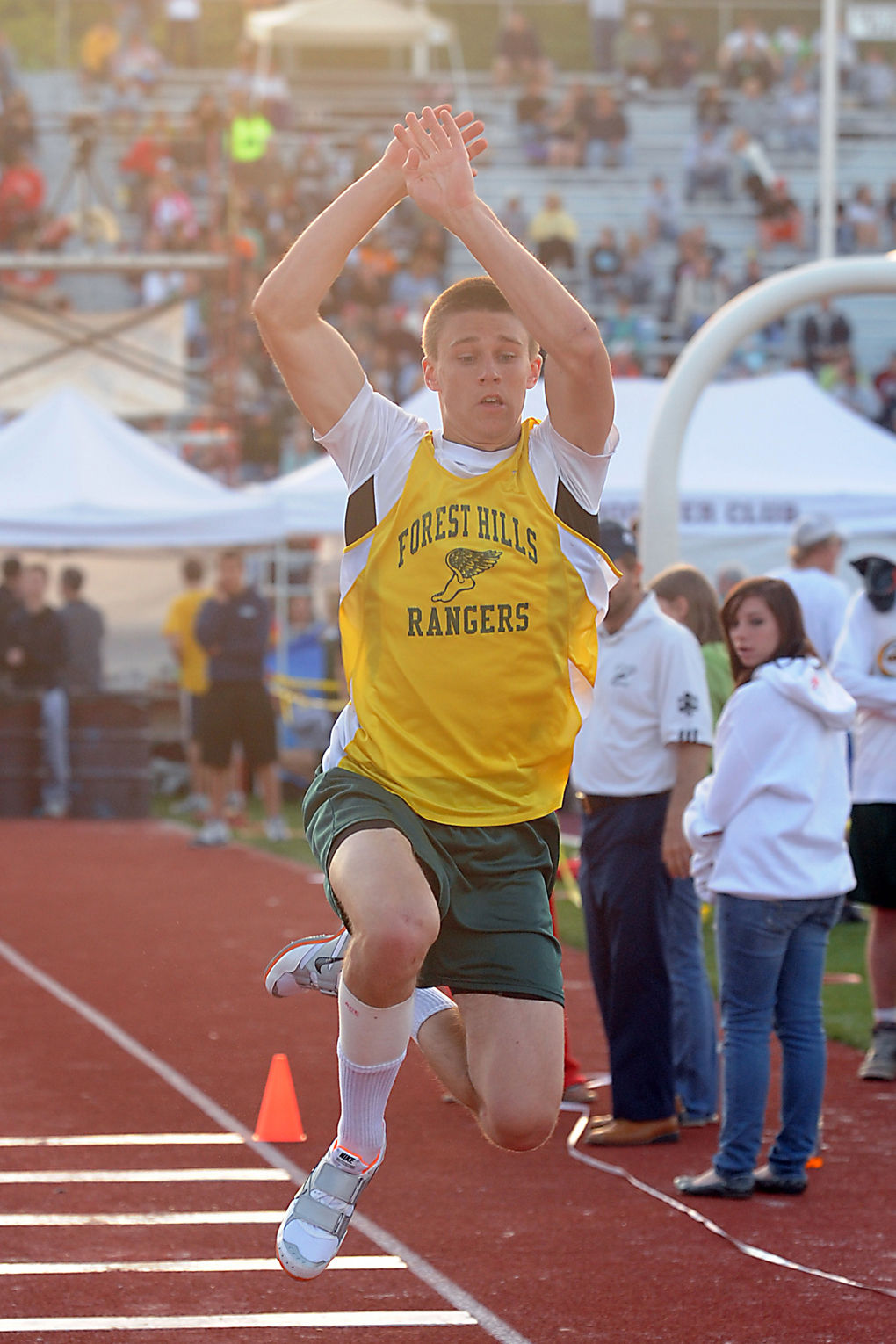 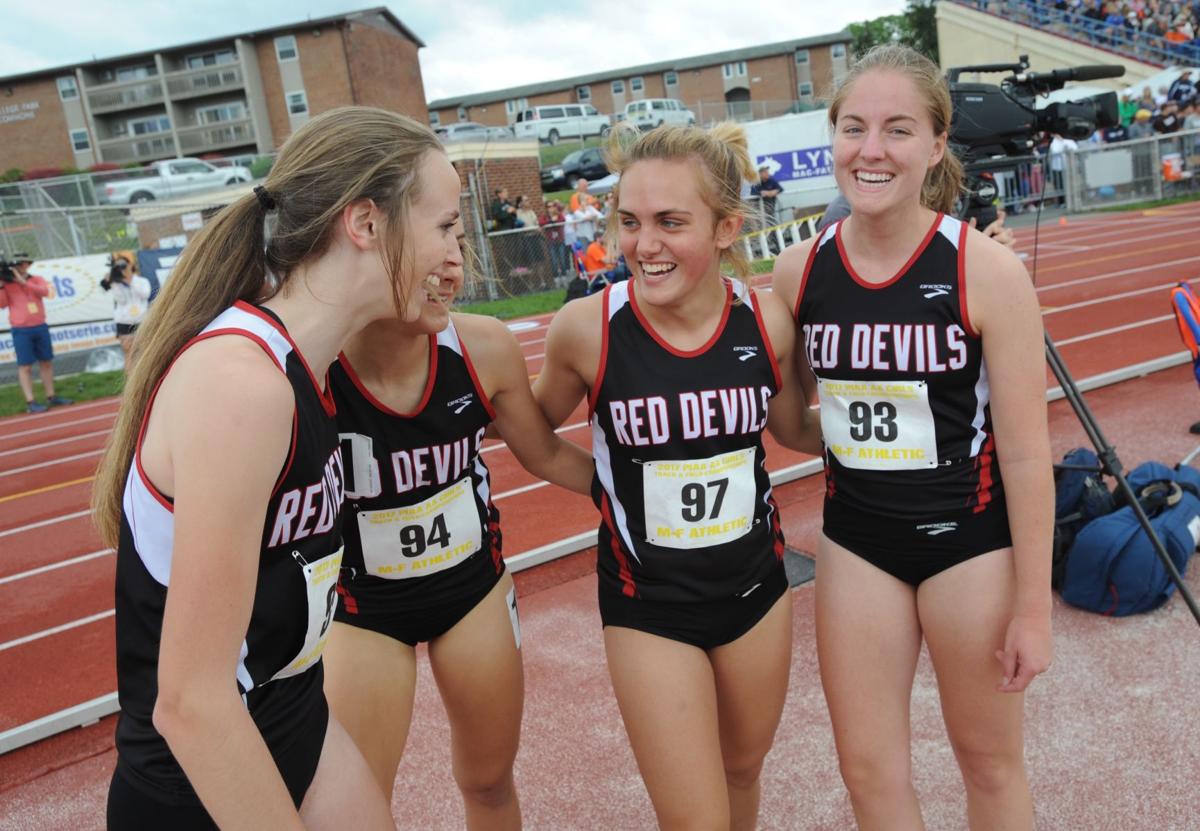 From left are Central Cambria's Paige Wess, McKenna Hayward, Lexi Peterman and Sydney Gilkey, celebrating their first place finish in a preliminary race of the 4x800 meter relay event at the PIAA Track and Field Championships in Shippensburg, PA., Friday, May 26, 2017.

Athletes have said that winning their first gold medal at the PIAA Track and Field Championships at Shippensburg University’s Seth Grove Stadium feels like the dream of a lifetime.

From among our area athletes, there have been four individuals and a Central Cambria 3200-meter girls relay team that have accomplished the feat twice.

• The achievements of Brad Kanuch of Westmont Hilltop were a little different.

He did win a pair of gold medals, but one was for triple jump (47 feet,

“I just remember all of the work I had put in during the year and it finally came to fruition,” Kanuch said. “I felt pretty confident going into that weekend, but you have to keep focused. When I won the triple jump, I figured, sure, I would be able to win the others, too.”

Kanuch and Aliquippa’s Tommie Campbell battled in both the dashes, with Campbell claiming the short run.

“Tommie Campbell was a very good athlete,” Kanuch said. “I definitely benefited from a good start in the 200, but in both races, you had to keep pushing the entire time. I remember when I won the 200, that was the happiest that I’ve ever been.”

One of the things that Kanuch said stood out for him, was being one of the first to be at the track at Shippensburg each day to get started with the pre-event routines.

Kanuch finished his track career with 11 medals, three from his sophomore year, four from 2005 and four from his senior season, but said he has gained so much more than just hardware.

“I have so much thanks for all of my coaches and parents and competitors,” Kanuch said. “I remember being on the triple jump podium with (Bedford’s) John Marshall, who was third. I am still great friends with him and Troy and Derrick Harris, and that all came from competing against each other.”

• Central Cambria’s Seymour had won the state cross country title when she was a sophomore.

“The first time you win anything at states – I remember cross country – you’re in initial shock that you’ve won,” Seymour said after the awards ceremony. “You don’t realize until a couple days later what you’ve done.”

The next season, despite struggling with mononucleosis in the early part of the spring, Seymour capped her high school career by getting the gold and the record.

Seymour ran the first half of that final 3200 race near the front, but let others hold the lead. She moved ahead of the frontrunners on Lap 6 and began lapping other runners on the seventh circuit.

Her final push down the front straightaway was greeted by cheers from the standing-room-only crowd up on its feet in the grandstands of Seth Grove Stadium at Shippensburg University.

“It helps a lot to have the crowd cheering for you,” Seymour said. “Running at home in a conference meet with a couple hundred people or when you’re running by yourself, it’s not the same. When you come here there’s so much support and so many people that help you keep going. It makes a big difference.”

Seymour finished her career with the pair of gold medals in track along with two gold medals and a silver in cross country. The Red Devils also won the Class AA team title at the 2007 PIAA cross country championships.

• Westmont Hilltop’s talented multi-sport athlete McQuillen was a starting guard on the Hilltoppers’ PIAA Class AA runner-up basketball squad, played soccer, was a member of the softball team and was a former Punt, Pass and Kick national champion.

She had only been throwing the javelin a year, but had won a silver medal as a sophomore in her first appearance at the state track and field championships in 2005.

McQuillen made sure that she made her mark the next season, capturing the gold medal in Class AA with a state-record throw of 162 feet, 4 inches – just 2 feet off the national record. The state record of 154 feet, set by Bald Eagle Area’s Angela Hoover in 2003, didn’t last long, as McQuillen set the new standard on her first throw.

She returned in 2007 to win her second straight javelin title, with a distance of 157 feet, 6 inches, 13 feet, 3 inches better than second-place finisher Rebekah Leitzel of Penns Valley.

“Coming in as the top dog with a target on your back, I think that got to me and I was trying too hard,” she said after the medals ceremony. “I threw 162 last year and I’ve finally gotten five feet away from that. You always have that in the back of your mind ‘What am I going to throw and when am I going to get close to that or when am I going to pass that?’ I haven’t done anything close to that this year.

“Coming to states this year, it was scarier the second time around. Going in as the second seed was not where I wanted to be placed, but you go from there. I thought, as the second seed, I would be less nervous, but I had it in the back of my mind. I was thinking way too much. I wasn’t having fun. Now I’m having fun.”

• Gallaher’s climb to glory was a short saga.

The Forest Hills jumper was not even participating in track and field at the beginning of the 2010 season, he was playing baseball.

But after practicing with his younger sister, Casey, Gallaher decided to give high jumping a try.

He turned up on the state radar in three earlier track meets including the District 6 championships, where he earned the top seed for the PIAA championships.

In just his fourth meet, the junior from Forest Hills won the gold medal in the high jump as the first to clear 6 feet, 6 inches.

“I was a little nervous at the beginning, but when I cleared the first height, I settled right in,” Gallaher said after the medals ceremony. “It feels great to win a gold medal in my first time ever being in Shippensburg.”

An outstanding basketball competitor, Gallaher was also fifth in the long jump with a distance of 21-8 in his first state competition.

The next season, Gallaher showed that he was no one-hit wonder.

Gallaher successfully defended his title in the high jump – the lone competitor in the field to clear 6 feet, 7 inches – to take home the gold in Class AA. Earlier in the day, Gallaher finished fifth in the long jump with a distance of 21-9.

“All week, I was thinking about defending this title, and I finally came out and did what I wanted to do,” Gallaher said after the medals ceremony. “The competition was a lot better than I expected. I was pushed pretty hard in the high jump and definitely in the long jump. It was fun. My goal today was to go higher, but it’s all right to jump that to win.

“It means a lot to be able to come to states and be successful and compete at the highest level and to let everyone know that Forest Hills has some good athletes.”

• Known for their success in cross country, the girls from Central Cambria also became double winners in the 3200 relay in the track and field championships in 2016 and ’17.

The Red Devils held off Villa Maria Academy for the victory in the 3200 relay in 2016. The foursome for the 3200 relay, all underclassmen at the time – Sydney Gilkey, McKenna Hayward, Paige Wess and Lexi Peterman – ran a time of 9:11.81 to lead the pack at the state meet and establish a school record.

The new Red Devils school record topped the old mark of 9:19.51 set in the 2008 silver finish at the state meet by the three Seymour sisters, Carly, Kelsey and Kendall, along with Ashley Stump.

It was a repeat run to gold in 2017 for Central Cambria’s Gilkey, Hayward, Wess and Peterman in the 3200 relay final.

“We talked again when we were at the line, that we had to have confidence in ourselves,” Gilkey, the lone senior, said following the medals ceremony. “That was the thing that really helped us win this race today. We are so dedicated to this, and we wanted to win it so badly.

“This could not be a better way to end my high school career. This is awesome and all that I could hope for.”

Coming Saturday: the only four-time gold medalist from the area.

Just as so many of the area’s student-athletes were disappointed when the PIAA shut down the spring sports season, I too, was crushed, especially when I realized that I would be among those that will miss my end of the season pilgrimage to Seth Grove Stadium at Shippensburg University for the PIAA Track and Field Championships.