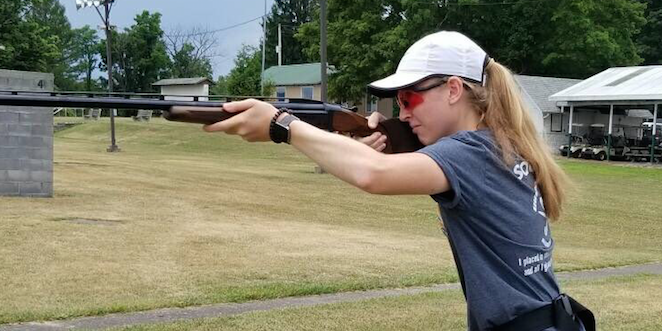 Central Cambria’s Jenna Smith takes aim at a target earlier in the 2020 season. 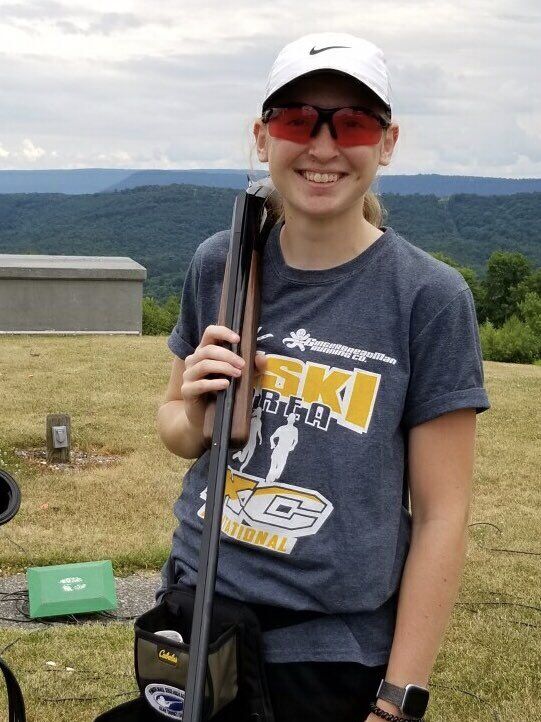 Central Cambria’s Jenna Smith led all females in the state during the 2020 spring season of the Pennsylvania State High School Clay Target League.

Central Cambria’s Jenna Smith takes aim at a target earlier in the 2020 season.

Central Cambria’s Jenna Smith led all females in the state during the 2020 spring season of the Pennsylvania State High School Clay Target League.

While the PIAA-sponsored spring sports were totally wiped out due to the COVID-19 pandemic, the Pennsylvania State High School Clay Target League was able to compete in 2020.

In just its second season, Central Cambria (2,359 total score) finished second behind Norwin (2,582.5) in Conference 1. The Red Devils were led by rising senior Jenna Smith, who led the state with a 23.2 season average.

“I’m really proud of the team,” Smith said. “Everyone shot really well this year. Even with the whole pandemic, everyone still came out and did their best.”

Once Cambria County entered the green phase of Gov. Tom Wolf’s reopening of the state, teams were allowed to compete in June.

“The league consists of five competition weeks. Each student shoots 50 targets per week,” Central Cambria coach Mike Smith. “A total of 250 for the league, that’s how your average is figured out at the end of the season.

“This year, we were in the first conference, Conference 1. We had to count our top 13 scores each week of our 19 students. We had some really good shooters.”

“We have a brother and sister that shoot together,” Mike Smith said of the Walwros. “We have a set of two brothers and two sisters. Obviously there’s a lot of competition among the family members to try to beat out their sibling. But really, it’s for fun. It’s to increase participation in the shooting sports. So it is competition, but it’s basically to get the kids out there participating in something new.”

Boasting three of the top 30 shooters in the state has helped Central Cambria become very competitive rapidly as a program still in its infancy.

“That was fantastic,” Mike Smith said of his top sharpshooters. “They only list the top 15 overall in male and female. Jenna was first in the state this year. Three of our shooters made the top 15 in each male and female division.”

Teams compete at their own facility. Shooting outside distanced from others makes the sport safe in regards to COVID-19. As opposed to the growing sport of rifle, hitting moving targets adds difficulty to trap shooting.

“Each team stays local. You have a home field,” Mike Smith said. “You shoot at your own field against yourselves basically. You take your scores at the end and we enter them into the Pennsylvania database.

“That’s how each team is ranked against each other based on the scores for the week.”

When the coronavirus closed schools, shooters were unable to properly prepare for their season.

“Usually there’s several weeks of practice. But with the pandemic this year, we were able just to squeeze in the five weeks of competition and missed all of our practice weeks,” said Mike Smith, Jenna’s father. “They were thrown right into it, right out of the gates.”

Being involved with a shooting family has helped Jenna Smith prosper.

“I like shooting with my family and getting to spend time with them.”

As for leading the state in average scoring, Jenna Smith, also a member of the basketball, cross country and track and field teams at Central Cambria, shocked herself with the results.

“I was surprised. I wasn’t expecting to come out on top,” she said. “I got in a groove in the beginning of the season and I just kept shooting really well. All the time and effort that I put into the sport, it’s definitely all worth it whenever you see the results.”

A rise in participation has helped local teams build their programs.

“The interest in the sport has grown,” Mike Smith said. “Last year, we only had 10 students participate. This year, we had 19. So in just one year, we basically doubled participation.”

Most shooters from the area grew up hunting with their fathers, which has helped them transition to the sport.

“A lot of schools in our area are starting to have teams and more kids are coming out and trying it,” Jenna Smith said.

“The success of our school team has drawn more people to come out and try it.”

Penn Cambria’s Rachel Caretti racked up an average of 17.6 to finish 14th in the state. The Panthers competed in Conference 2.