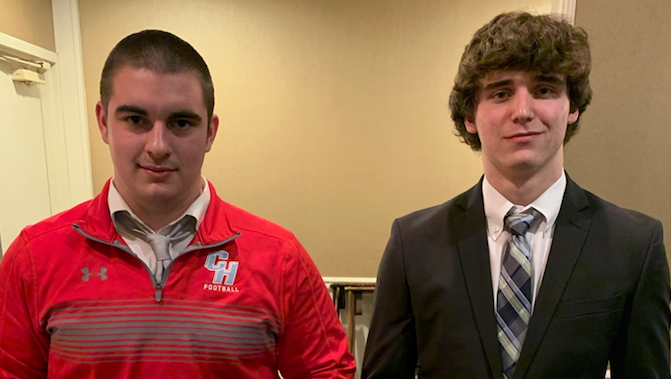 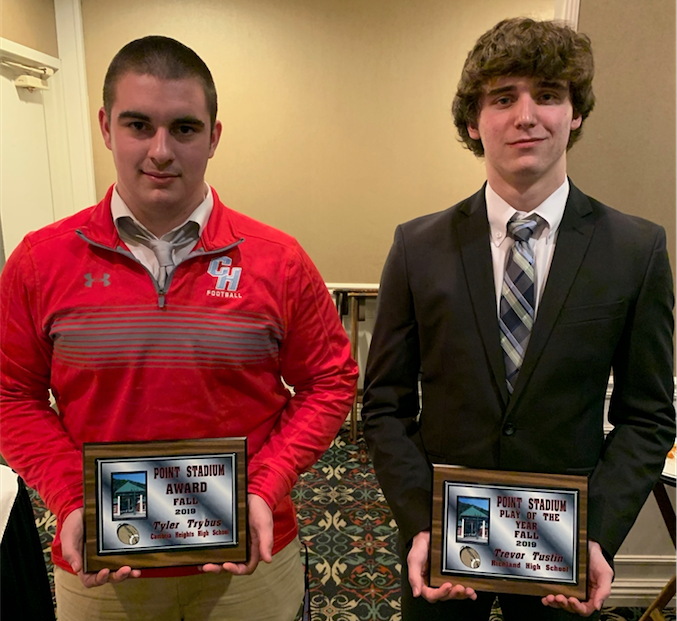 The annual Point Stadium Award banquet was held on Sunday evening at the Holiday Inn-Johnstown Downtown.

“It feels great. I wasn’t really expecting to win this,” said Trybus, who was a force on both sides of the ball and on special teams during his award-winning performance against Bishop McCort Catholic in September. “You work hard all year and it pays off in the end.”

Trybus shared the honor with his teammates and coach Jarrod Lewis, who attended Sunday’s banquet.

“We just hung in there and stuck together as a team,” said Trybus, who intends to attend Thaddeus Stevens College in Lancaster and continue his football career.

Ansell is a sophomore on the Pitt-Johnstown baseball team and could not attend the banquet as the Mountain Cats were competing in Myrtle Beach, South Carolina, during the weekend.

“This feels really great to be recognized by the committee for this,” Tustin said. “It’s something I can look back on in my life and feel very proud about.

“That was just so energetic and it just happened so fast,” Tustin said of his 77-yard touchdown return against the Crimson Crushers in August. “When I broke free of that last tackle, I just felt so good and knew we were going to win that game.”

Ward is a junior baseball player at Seton Hill University and could not attend Sunday’s event.

The committee recognized Tribune-Democrat sports writer Mike Mastovich for more than three decades of local sports coverage. Mastovich has served as emcee of the banquet since 1998.

• Trybus took the fall Point Stadium Award based on an outstanding all-around effort in the Highlanders’ victory over Bishop McCort Catholic.

Trybus had four tackles and was involved in a sack on defense. He punted once for 43 yards and pinned the Crushers inside their own 20-yard line.

• Ansell earned the spring/summer Point Stadium Award based on his mound outing against a potent Philadelphia Bandits franchise in the 75th annual AAABA Tournament.

The righty pitched six strong innings in a 5-2 win over Philadelphia that put the Johnstown franchise back into the championship game of the AAABA Tournament.

• Tustin made a momentum-swaying special teams play as the Rams opened the season with a victory over the Crimson Crushers on Aug. 23.

The Richland playmaker returned a kickoff 77 yards for a touchdown in a 28-14 win over Bishop McCort Catholic.

The Crimson Crushers had just pulled within 21-14 when Tustin broke his long run.

• Ward received the spring/summer Point Stadium Play of the Year for a dramatic at-bat during the 75th annual AAABA Tournament.

After a MVP season capped by Martella’s Pharmacy’s AAABA Tournament championship in 2018, Ward was injured early in 2019 and hadn’t played since the 12th game of the Johnstown Collegiate Baseball League regular season.

Ward made his return to the lineup count. He entered as a pinch hitter in the bottom of the eighth inning against the Zanesville Junior Pioneers and ripped a dramatic two-run single to center field on a 1-2 count. Martella’s eventually won 5-4 in the AAABA Tournament contest on Aug. 8.

Two versatile quarterbacks earned Point Stadium Award monthly nominations in October and November, while a game-changing touchdown reception and a pick-six interception took Play of the Month honors as the 2019 schedule concluded at the venue now known as Sargent’s Stadium at the Point.