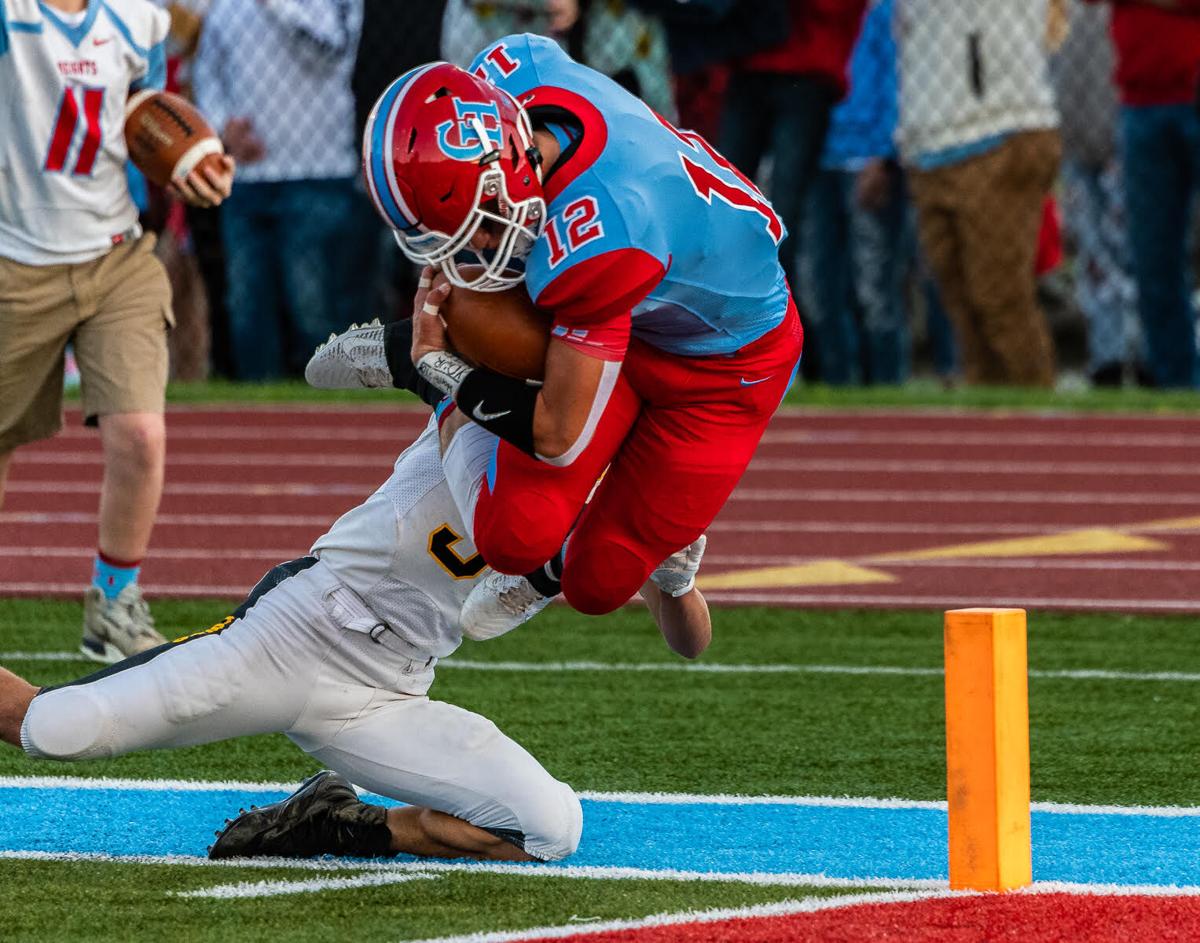 Cambria Heights quarterback Ty Stockley flies into the end zone against Northern Cambria in the Coal Bowl on Friday, Sept. 10, 2021, in Patton, Pa. 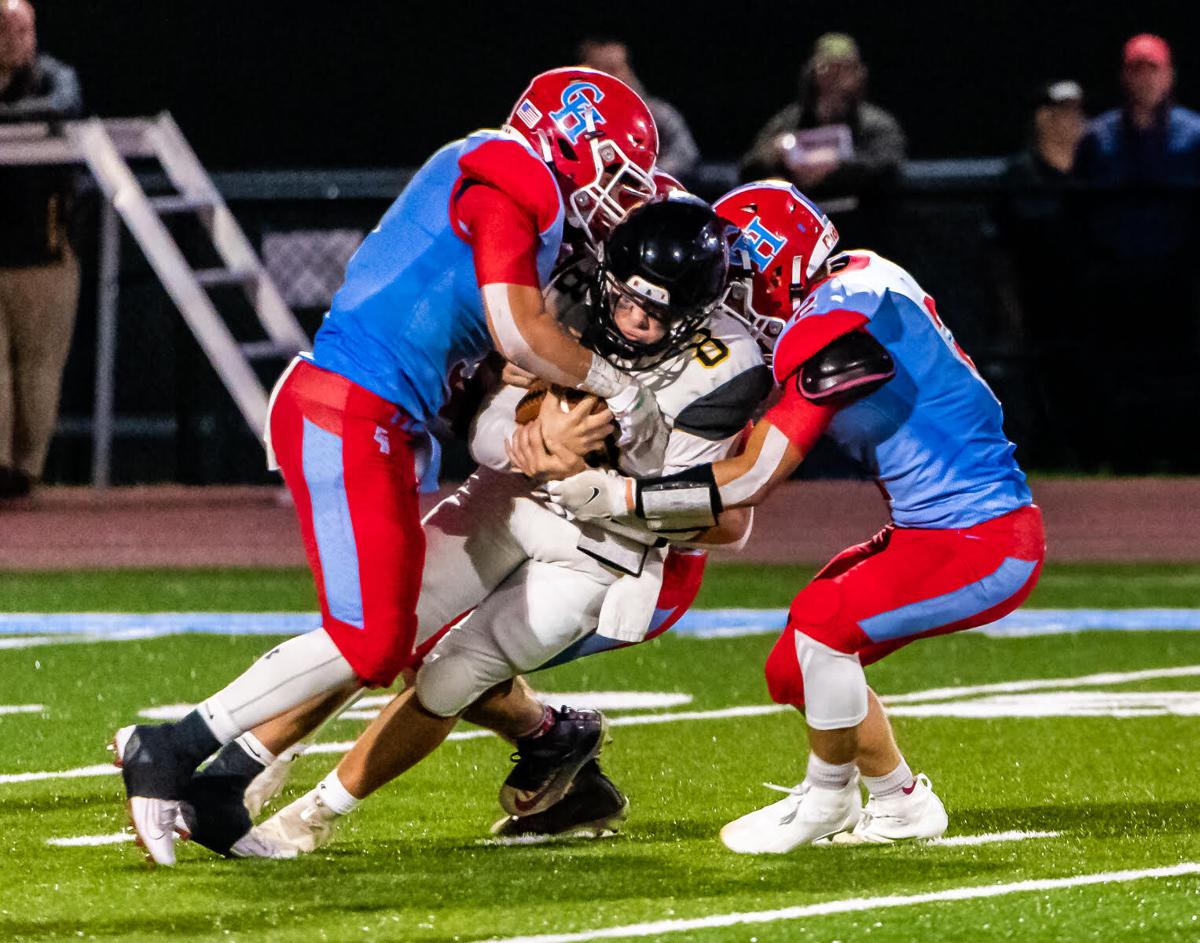 Northern Cambria’s Owen Bougher is tackled for a loss by Cambria Heights’ Ryan Haluska (left) and Tanner Hite (right) during the Coal Bowl on Friday, Sept. 10, 2021, in Patton, Pa.

Cambria Heights quarterback Ty Stockley flies into the end zone against Northern Cambria in the Coal Bowl on Friday, Sept. 10, 2021, in Patton, Pa.

Northern Cambria’s Owen Bougher is tackled for a loss by Cambria Heights’ Ryan Haluska (left) and Tanner Hite (right) during the Coal Bowl on Friday, Sept. 10, 2021, in Patton, Pa.

PATTON, Pa. – Fans were so eager for the renewal of the Coal Bowl that cars were backed up as far as the old Patton Stadium with a half-hour to go before kickoff.

By the time some of them finally made it to the ticket gate, Cambria Heights already had the game well in hand.

The Highlanders put another terrific defensive performance in the books, holding Northern Cambria to minus-36 yards in a dominating 35-0 victory over their archrival in high school football on Friday night at Cambria Heights High School.

“This means everything,” Heights junior quarterback-linebacker Ty Stockley said. “Ever since we found out we were going to be in the Heritage Conference a year ago, everybody was talking about this game. We’ve been working our butts off. This game is our Super Bowl and we’re glad to get it done today.”

Stockley, who mugged with the Coal Bucket Trophy for a team photo after the game, was a big part of the effort. He ran for Heights’ first touchdown and threw for the Highlanders’ third TD of the first half. He also had a sack and another tackle for loss on the defensive side.

Although this was the first time the rivals had squared off since 2014, the atmosphere clearly was one of a deep meaning on both sides, and the players confirmed that.

“The rivalry’s back and there’s so much tension built up and I’m glad to keep the bucket in our trophy case,” Hite said. “We brought our physicality and we were able to manhandle them up front, playing Heights football. That’s what we do.”

While the Highlanders usually make that evident with their running game, this time it was on the defense where that was most apparent. Northern Cambria (0-3) didn’t cross midfield until Cody Dumm’s 16-yard run in the final minute.

“They smothered us. We had no breathing room. We had no answers for them,” said Colts coach Sam Shutty, whose team was averaging nearly 200 yards per game rushing through the first two weeks.

Another of the most-visible stars for the Heights defense was senior lineman Zane Miller, who had a sack, a couple of other tackles for loss, a forced fumble and a recovered fumble. Heights hasn’t allowed an opponent over 200 yards yet this season.

“It’s the Coal Bowl, so we wanted to come out and make a stand. Everyone came out motivated, ready to play,” Miller said. “Confidence was a thing coming in. I think we showed that.”

The Highlanders improved to 3-0 overall and 2-0 in the Heritage. Cambria Heights coach Jarrod Lewis said the hiatus took nothing away from the rivalry or the energy from his players.

“We didn’t have to do anything. They were excited. They were ready to go,” Lewis said. “All week we were focused and we were hungry. It means a lot to these guys. A lot of their parents have lived in the communities for a while, so they knew what the game meant. It was important to them and it was exciting.”

After forcing a three-and-out to get great initial field position, Cambria Heights drove methodically down the field, 59 yards in seven plays. Stockley went the final 9 on a sweep around left end with 6:46 left in the first quarter.

The Highlanders couldn’t take advantage after recovering the ensuing kickoff at the Colts 26, but it only set back Heights slightly. Another three-and-out and Tanner Trybus’ 15-yard punt return put Cambria Heights in business at the Colts 40. Eight plays later, Hite sliced through a sliver of light on the right side of the Highlander line and went into the end zone from 7 yards out.

Stockley connected with Trybus on a beautiful 32-yard fade pass for Cambria Heights’ second touchdown of the second quarter on the Highlanders’ next offensive play. The score came immediately after Miller stripped Northern Cambria’s Peyton Myers of the ball in the Colts backfield.

Cambria Heights outgained Northern Cambria 173-(-33) in the first half.

Greg Page earned his 99th win as a coach for Homer-Center (2-1) as his Wildcats pounced on the United Lions (0-3) 46-0 in a Heritage Conference matchup at Memorial Field on Friday night.