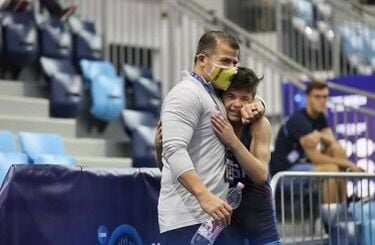 Bo Bassett hugs his father, Bill, after earning a spot in the 45-kilogram freestyle final at the Cadet World Wrestling Championships in Budapest, Hungary, on Tuesday, July 20, 2021. The 14-year-old Bishop McCort Catholic student will wrestle Russia’s Alikhan Ashinov for the world title on Wednesday. 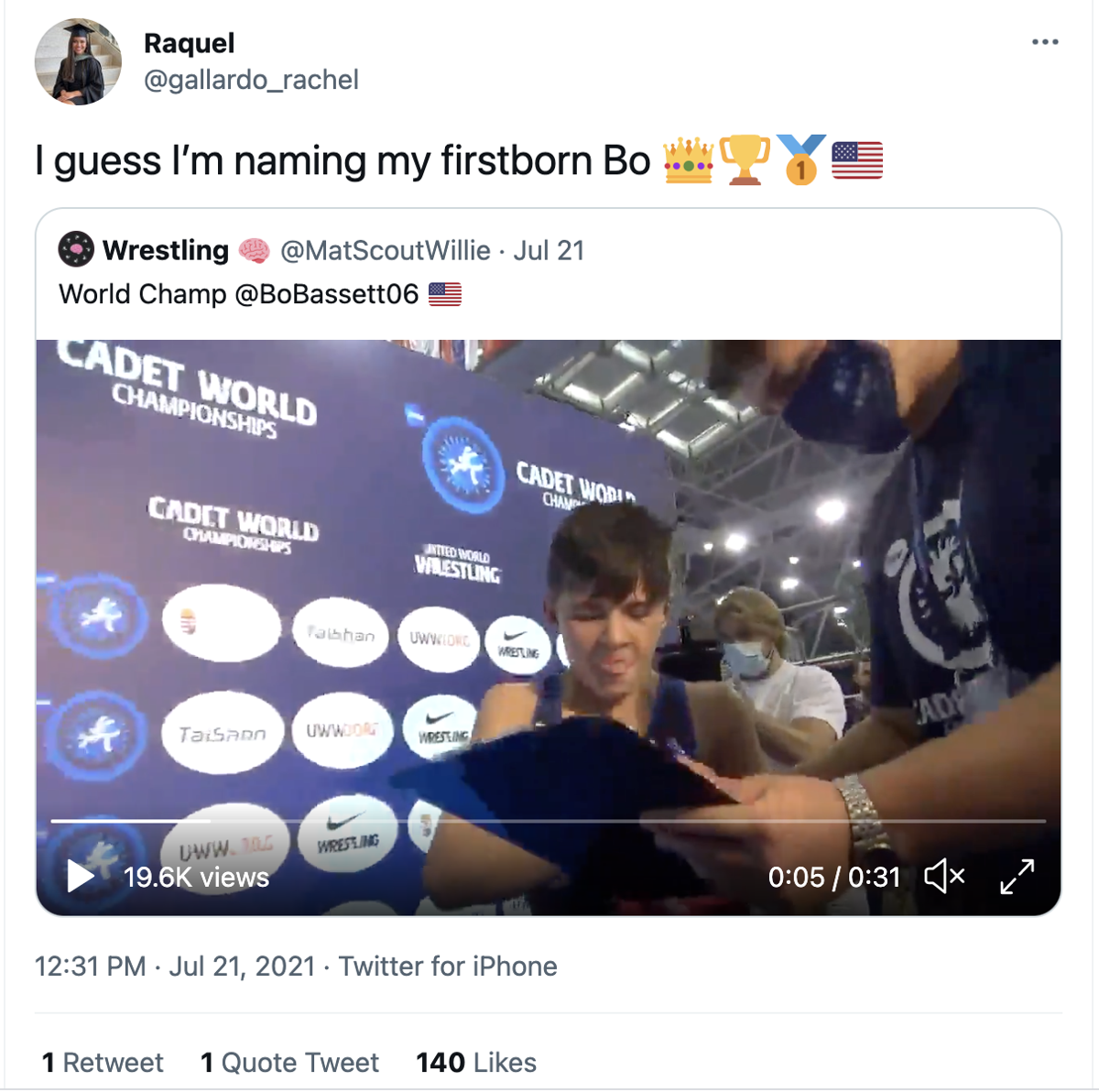 Bo Bassett hugs his father, Bill, after earning a spot in the 45-kilogram freestyle final at the Cadet World Wrestling Championships in Budapest, Hungary, on Tuesday, July 20, 2021. The 14-year-old Bishop McCort Catholic student will wrestle Russia’s Alikhan Ashinov for the world title on Wednesday.

Bo Bassett’s performance at the Cadet World Wrestling Championships has drawn interest from far and wide.

The 14-year-old Bishop McCort Catholic student seized the attention of wrestling fans with a dominant performance on his way to winning a world title at 45 kilograms in freestyle on Wednesday.

“It’s even in small-town North Carolina that he’s being talked about,” said Rachel Gallardo, of Eden, North Carolina, who tweeted on Tuesday “if Bo Bassett wins Cadet Worlds I’ll name my firstborn after him,” with a pair of American flag emojis and a USA hashtag.

Gallardo, a 24-year-old former manager for the Appalachian State wrestling team, has never met Bo or his family, but was enamored by his showing in Budapest, Hungary. Actually, she jumped aboard the Bassett bandwagon before it arrived in Hungary, as she saw The Tribune-Democrat’s story about supporters’ patriotic display as he left for Europe.

“I showed my parents that article about his sendoff,” Gallardo said in a telephone interview. “It’s so cool that young people are being encouraged to do great things.”

Gallardo, who is a correspondent for the wrestling website Intermat, has watched Bassett become a social media sensation in the sport.

“I’ve heard of Bo Bassett a lot through Twitter,” she said. “I say some pretty funny stuff off the handle sometimes. I was like, ‘I’m naming my firstborn child after him.’ ”

Gallardo doesn’t plan to get married or have a child anytime soon, but she wasn’t backing down from her promise. Moments after Bassett pinned Russia’s Alikhan Ashinov for the world title, she tweeted, “I guess I’m naming my firstborn Bo,” with emojis of a crown, a trophy, a gold medal and an American flag.

Bassett’s given first name is actually Bowen, and his middle name is William. Gallardo said she and her mother jokingly discussed honoring Bassett with one of those.

“I might could live with that,” she said in her southern drawl.

She also hinted that maybe a pet and not a child will be named in his honor.

“Maybe my first baby will be a dog or a cat or a fish,” she said.

“Maybe it will be a fur baby.”

Gallardo wasn’t the only wrestling observer tweeting about Bassett.

Adam Tirapelle, who won an NCAA title at 149 pounds wrestling for Illinois in 2001 and has coached some of the nation’s top high school wrestlers, tried to put Bassett’s accomplishments into perspective.

“I don’t know @BoBassett06,” Tirapelle tweeted, “but him winning Cadet World Gold at 14, signing a waiver just be able to compete, in the fashion he did (all TF & pins) is one of the more remarkable wrestling accomplishments I’ve witnessed. Legendary is overused but that was utterly ridiculous!”

With Bassett’s extraordinary performances come even more outlandish posts, such as one from Intermat correspondent Austin Sommer, who tweeted, “Typically I hate when adults put so much pressure on kids, but here goes … Will Bo Bassett ever lose again to somebody born in the USA?”

There also was a post featuring an adult, reportedly a foreign coach, getting his picture taken with Bassett in Budapest because he wanted a keepsake of a “future Olympic champion.”

That kind of talk might be a bit premature, but Bassett has put the wrestling world on notice, and many fans are reveling in his success.

“It’s a niche sport, it’s a very small population of us,” Gallardo said. “It’s not tee-ball. Not everybody does it, but I think it makes it that much more special when you make it to that level.

“It feels so tight-knit because it is. I hope we can continue to grow it and continue to increase that popularity.”