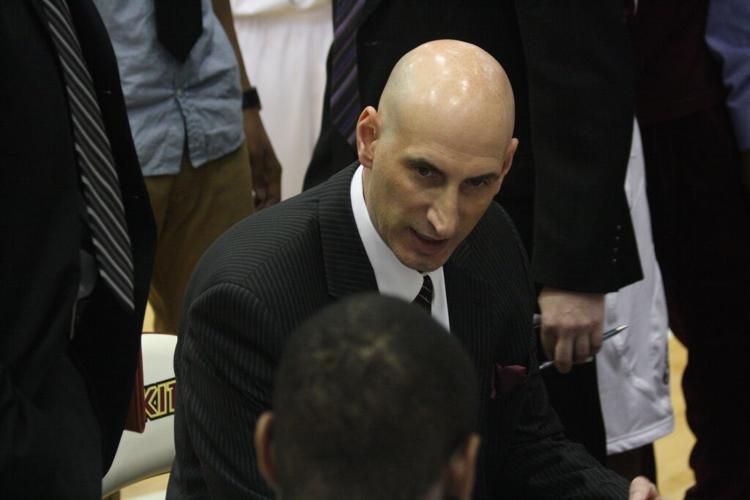 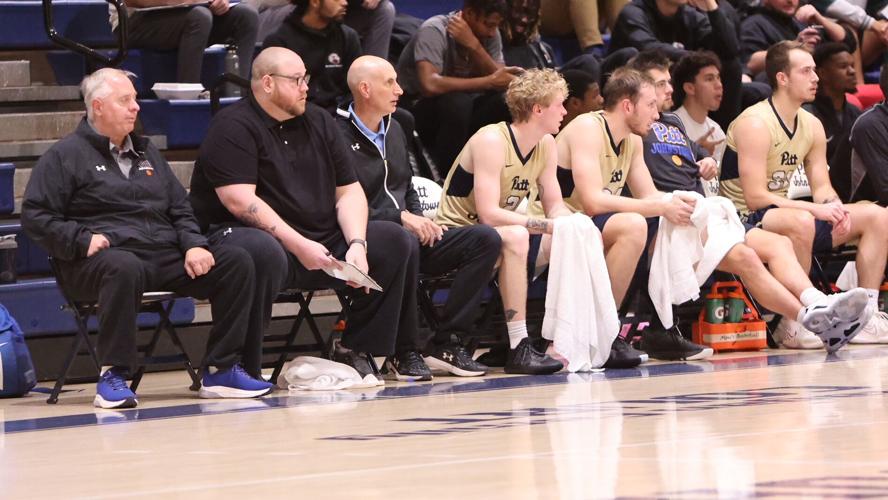 Windber native and assistant coach John Sanow, third from left, watches the action from the University of Pittsburgh at Johnstown basketball bench during a recent Mountain Cats game at the Sports Center. At the far left is Pitt-Johnstown head Coach Bob Rukavina, with assistant coach Patrick Grubbs in the middle.

Windber native and assistant coach John Sanow, third from left, watches the action from the University of Pittsburgh at Johnstown basketball bench during a recent Mountain Cats game at the Sports Center. At the far left is Pitt-Johnstown head Coach Bob Rukavina, with assistant coach Patrick Grubbs in the middle.

JOHNSTOWN, Pa. – Windber Area High School graduate John Sanow is back home on the basketball court as a volunteer assistant coach on the Pitt-Johnstown men’s team.

On Friday, Sanow will be part of a different type of homecoming, as Pitt-Johns- town visits Bloomsburg University, the program that parted ways with Sanow in March. He posted a 171-232 record as the second-longest tenured head coach and second-winningest coach of the NCAA Division II Huskies.

“It’s bittersweet going back. I recruited all of those kids,” Sanow said. “I just loved coaching and working at Bloomsburg University for 16 years. It’s a really special place and holds a special place in my heart.

“It will be tough going back and competing against the kids that are there now,” Sanow said. “Ultimately, I’m glad to be back in the gym and coaching basketball.

“I’m happy to be involved in such a great program as Pitt-Johnstown.”

The Mountain Cats will carry a 4-2 record into a weekend that includes a pair of tough road games. After Bloomsburg (0-3), Pitt-Johnstown visits Atlantic Region sixth-ranked East Stroudsburg (4-0) on Saturday.

Rukavina appreciates having Sanow and longtime assistant coach Patrick Grubbs beside him on the Cats’ bench.

“John brings a wealth of experience to our staff,” Rukavina said. “I learned a lot from him when he was with us 20 years ago and I consider him one of my very good friends.”

Sanow starred in basketball and football at Windber High School. He began his college career at Clarion University for two seasons before transferring to Indiana (Pa.) in 1984.

Sanow led IUP in scoring and was a first-team all-PSAC selection in 1986.

After graduating, he joined former St. Francis University men’s basketball coach Jim Baron as an assistant coach and was part of the 1990-91 Red Flash team that won the Northeast Conference championship, advancing to the NCAA Tournament.

When Baron moved on, Sanow remained at St. Francis with then-head coach Tom McConnell until 1999, when he joined Rukavina’s staff at Pitt-Johnstown.

Stops as an assistant at Gannon University and University of Vermont followed, before Sanow landed his first head coaching position at Bloomsburg in 2006-07.

Sanow also was a finalist for the Indiana (Pa.) job that same year, but Joe Lombardi was named head coach of the Crimson Hawks, a post he still holds. Sanow and Lombardi had worked together as assistant coaches with Baron at St. Francis.

“It’s an unbelievable opportunity to be able to come back to a program that I was fortunate enough to be at 20 years ago, and to work with a guy who has been a mentor and great friend for a long time,” Sanow said of Pitt-Johnstown and Rukavina.

“Bob has assembled a really good group of guys, a veteran group. I’m excited to be with the program.”

His return to the Johnstown region also provided Sanow with a chance to follow his alma mater throughout a special football season. Windber went 11-2 and won the District 5 Class 1A title, advancing to the state playoffs.

“Windber football had a great year,” said Sanow, a former Ramblers quarterback who was selected to the Big 33 roster as a senior, but didn’t play in the prestigious all-star game after he committed to college basketball.

“It was exciting to see how well they did,” Sanow said.

“Those guys just had a great year. This year’s team was special and made the Windber fan base very proud.”

Sanow scored 1,090 career points at Windber and was part of former coach Emery D’Arcangelo’s 22-win, District 6 Class 1A championship team in 1981-82, when the Ramblers were in District 6.

“I’ve always loved the game,” Sanow said. “To have the opportunity to go into coaching and give back to the game has been an awesome journey for the last 35 years.

“I feel so fortunate that I have been in the game this long and continue to have opportunities to coach and hopefully make an impact on young men through the game of basketball.”