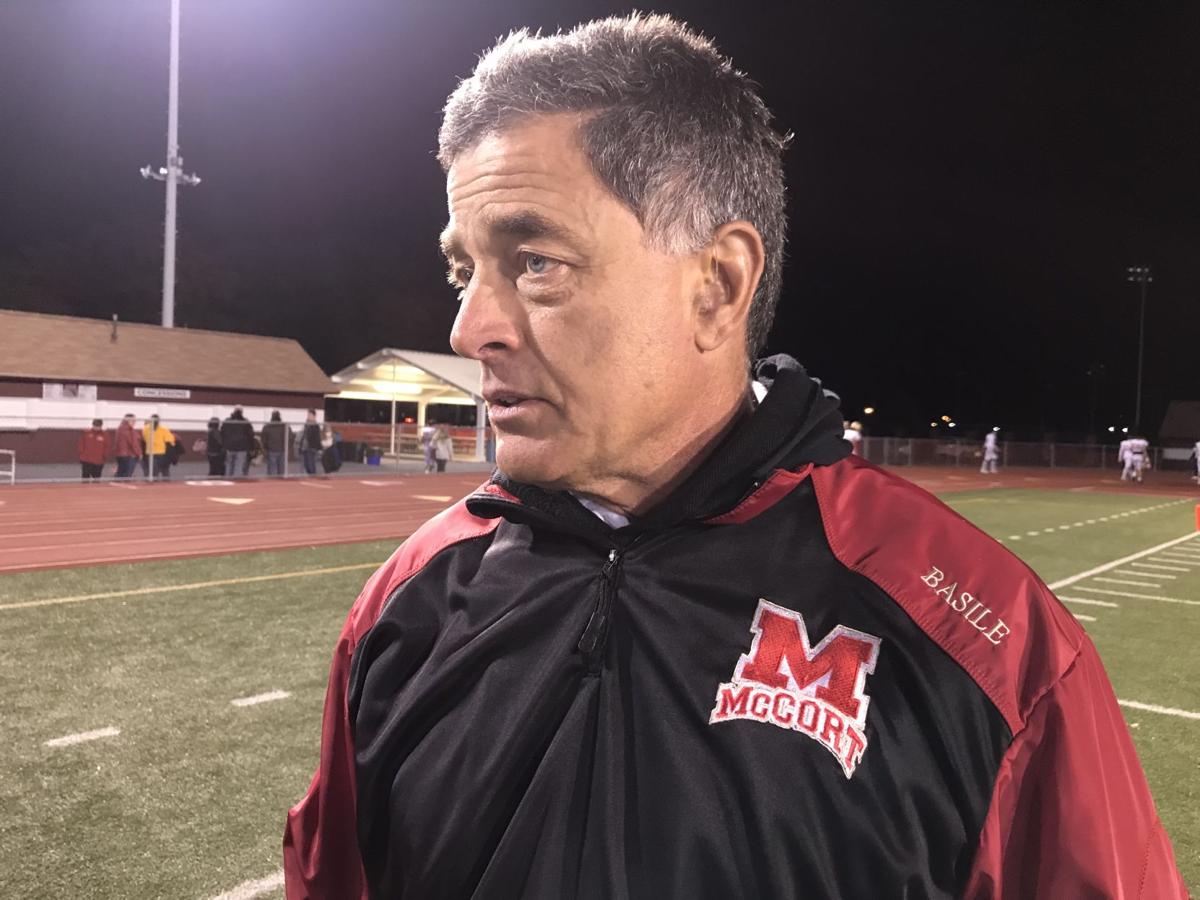 Bishop McCort coach Brian Basile talks to reporters after a 22-7 loss against Bishop Guilfoyle on Friday, Oct. 25, 2019, at Mansion Park in Altoona. 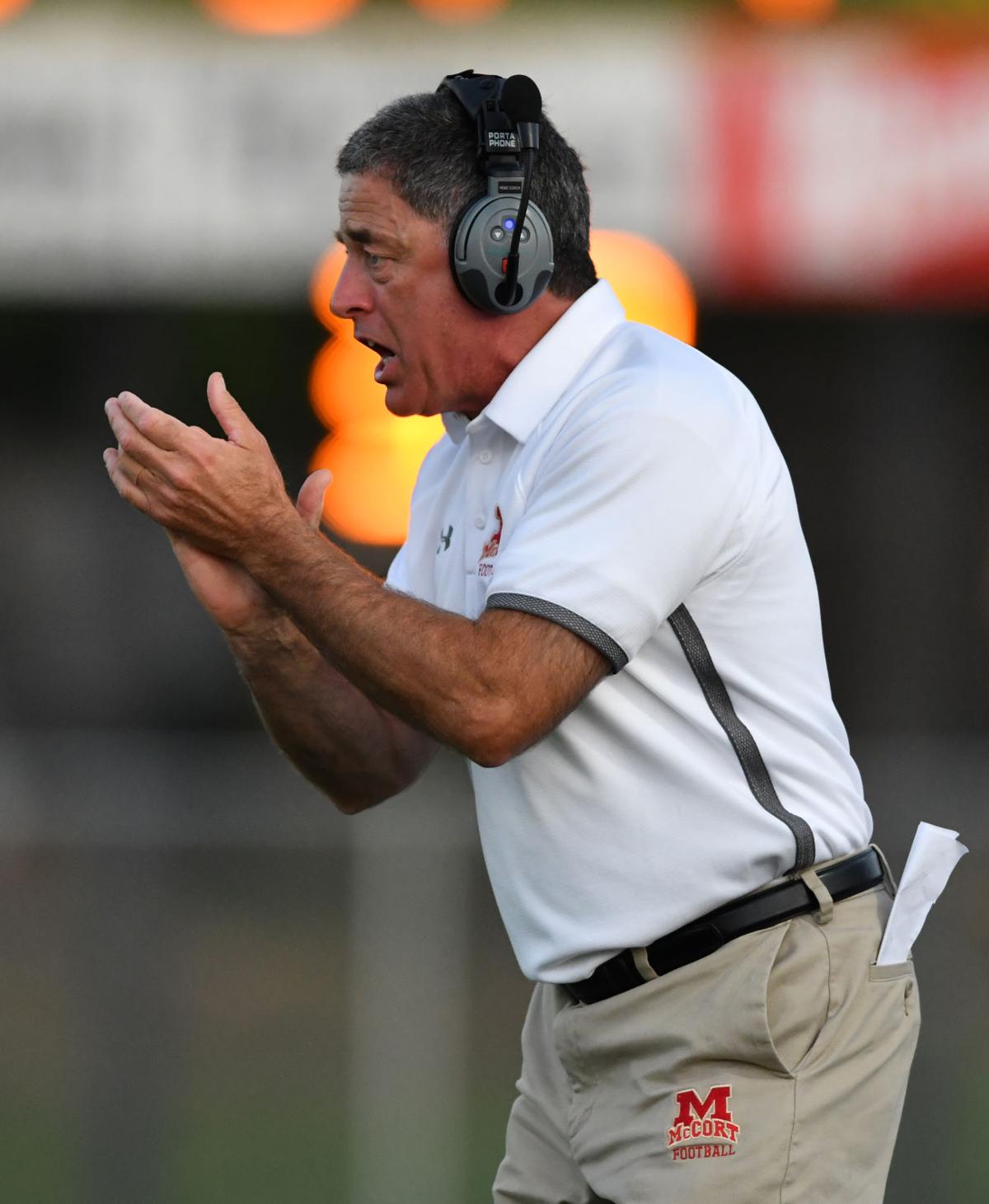 Bishop McCort coach Brian Basile talks to reporters after a 22-7 loss against Bishop Guilfoyle on Friday, Oct. 25, 2019, at Mansion Park in Altoona.

On Wednesday, Basile announced he is retiring after five seasons as coach of the Crimson Crushers. The well-known local businessman, educator and coach helped Bishop McCort Catholic navigate through some difficult times to produce a pair of 10-win teams and 32 victories overall.

“I met with the team. It wasn’t easy. I told them that life is never exactly the way you plan it and it was a good time for me to move on,” Basile, 60, told The Tribune-Democrat on Wednesday. “I told them whatever they do, do it straight from the heart, with passion and do what’s right. As long as you do what’s right and do it with passion, good things will happen.

“We met in the chapel. Just like we did after every weight room lift, every practice and every game, we ended by saying a prayer together.”

Basile led the Crimson Crushers to a 32-27 overall record, including a 6-6 mark this past season, which ended with a District 6 Class A playoff loss to eventual state runner-up Bishop Guilfoyle Catholic.

Basile’s teams produced back-to-back 10-3 seasons with District 6-AA runner-up finishes to Ligonier Valley in both 2016 and 2017.

Those silver-medal performances marked a dramatic improvement over a 3-7 record in 2015, the year Basile took over.

Basile and his staff blocked out the distractions and got to work.

“Just getting things back to the McCort tradition of playing hard-nosed football and getting things back on track to where football was exciting again and fun was special,” Basile said. “That was a big part of it. I’m old-school in a way where, football-wise, I like to control the clock.

“I think in 2017 we averaged 17 first downs a game. It was one of the highest season totals. Move the chains. Keep the ball out of the other guy’s hands. Run the ball and complement it with the pass.”

Bishop McCort Catholic Principal Tom Smith has served as an assistant coach with Basile the past three seasons and previously coached against him when Smith was an assistant at city rival Greater Johnstown High.

Smith said Basile’s won-loss record was important – but the intangibles were even more significant.

“Brian brought the element of faith-based sportsmanship to our school,” Smith said. “Brian would gather the kids – win, lose or draw – at the end of the games and had them sing, ‘Amazing Grace.’ That’s tradition here now.”

'Back on track again'

Smith also acknowledged the role Basile and his staff had on a program that had gone a combined 4-16 in the two seasons before his arrival. The Crimson Crushers had 33 consecutive winning records from 1980 through 2012 until posting two straight 2-8 marks.

“He took over and did a real nice job of putting McCort back on track again.”

Basile has coached in the region at the high school, college and professional indoor levels.

Previously he had been an assistant football coach with Central Cambria, Greater Johnstown, Richland and Conemaugh Township at the high school level. Basile coached at Frostburg State University as an assistant for six seasons.

He coached indoor football as an assistant with the Johnstown Jackyls and J-Doggs, and as head coach of the Johnstown Riverhawks. Basile also coached with the Pittsburgh Power in the Arena Football League.

'In the right direction'

Now he and his wife, Carrie, will have more time to spend with their children.

“My kids are getting a little older. Sammy’s 4 and Bella’s 8. My oldest daughter is 26 and she lives in Atlanta. I missed a lot of that with her. I don’t want to miss it again,” said Basile, who taught with Appalachia Intermediate Unit 8 and is an owner of Pizza-Deli Six Pack in Johnstown.

“Time with your family is something you can never get back. It’s more precious than anything, the time you get to spend,” he said. “I always like to squeeze the most out of every day between working at the deli, I taught for 30 years, and coaching football 12 months out of the year.”

Smith said the Bishop McCort Catholic Board of Trustees will handle the hiring of a new coach.

“There is no timeline right now,” he said.

Basile said the potential for a smooth transition is in place.

“We had four graduates that played at McCort on the staff this year,” Basile said. “We have a good staff here. We hope to keep things moving forward in the right direction and in a positive way.

Less than a month after resigning as the varsity football coach at Bishop McCort Catholic, Brian Basile will make a return to the sidelines for the 2020 gridiron season.