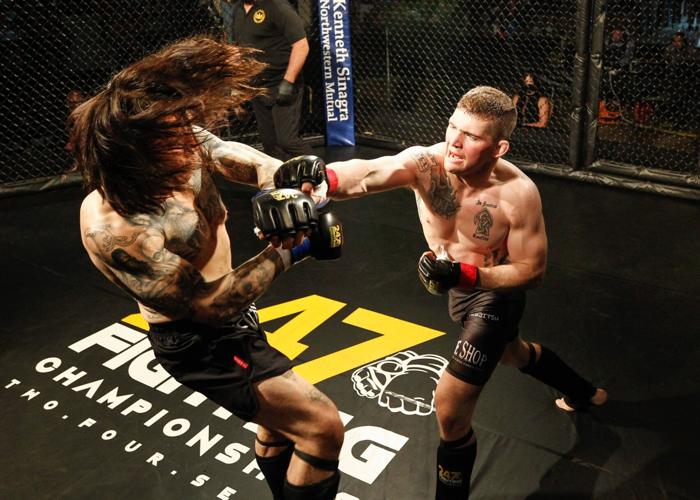 Taylor Cahill (right), of Berlin, throws a punch during his victory over Gabriel Tellez during Brawl in the Burgh 6 in Monroeville in May. Cahill won the fight by decision and launched the idea of bringing a 247 event to Johnstown.

Taylor Cahill eyes up his opponent in this undated fight.

Taylor Cahill (right), of Berlin, throws a punch during his victory over Gabriel Tellez during Brawl in the Burgh 6 in Monroeville in May. Cahill won the fight by decision and launched the idea of bringing a 247 event to Johnstown.

Taylor Cahill eyes up his opponent in this undated fight.

Taylor Cahill has been dedicating his life to combat sports for the past few years, and it’s starting to pay off for the Berlin resident.

Cahill and his brothers Tanner and Toby also qualified for the UWW Grappling World Championships, which will be held in Pontevedra, Spain, next month.

“It’s been like two years of rolling in dirty wrestling rooms, and in this past two or three months, it’s been balls to the wall,” Taylor Cahill said. “I’m pretty pumped. It’s happening now. We just have to keep rolling and stay consistent.”

All three brothers have Division I wrestling experience, as does Gavin Teasdale, who now lives in Berlin and trains alongside the Cahills. Teasdale also qualified for the grappling championships, as he won the world team trials in Omaha, Nebraska, in July.

“We’re the first four from Pennsylvania to ever be a part of the grappling championships,” Taylor Cahill said.

The group has been training together at The Shop in Berlin as well as with Danillo Villefort of Indio Dojo Martial Arts in Pittsburgh. Taylor Cahill went to Brazil to train with Murilo Bustamante, the former UFC title winner and jiu jitsu world champion.

“He’s my coach’s coach,” Taylor Cahill said. “I call him my MMA grandpa.”

He was supposed to fight at 155 pounds, but had two prospective opponents get injured before the fight. He ended up bumping up 10 pounds to fight Mello in a Martial Arts Championship event. Cahill predicted a first-round victory via a rear naked chokehold and then won in exactly that fashion.

The next step could be signing with a management company.

Then he’ll set his sights on the Legacy Fighting Alliance as a steppingstone toward what he hopes is his ultimate destination.

“My future goal, it changes every month, but my goal is to run the LFA,” Cahill said. “It’s a tall task, but I think I can do it. I want to finish five or six guys, get the title and get the call to the UFC. The UFC is the premier division. It’s where the best fighters in the world are. I want to be in the UFC within a year and a half.”

Cahill sees big things on the horizon for him and his Shop teammates.

“When you put that work in and compete the way that we compete, I think good things are going to happen,” he said. “I’m excited.”

The return of mixed martial arts to Johnstown was a knockout, according to the owner of 247 Fighting Championships.