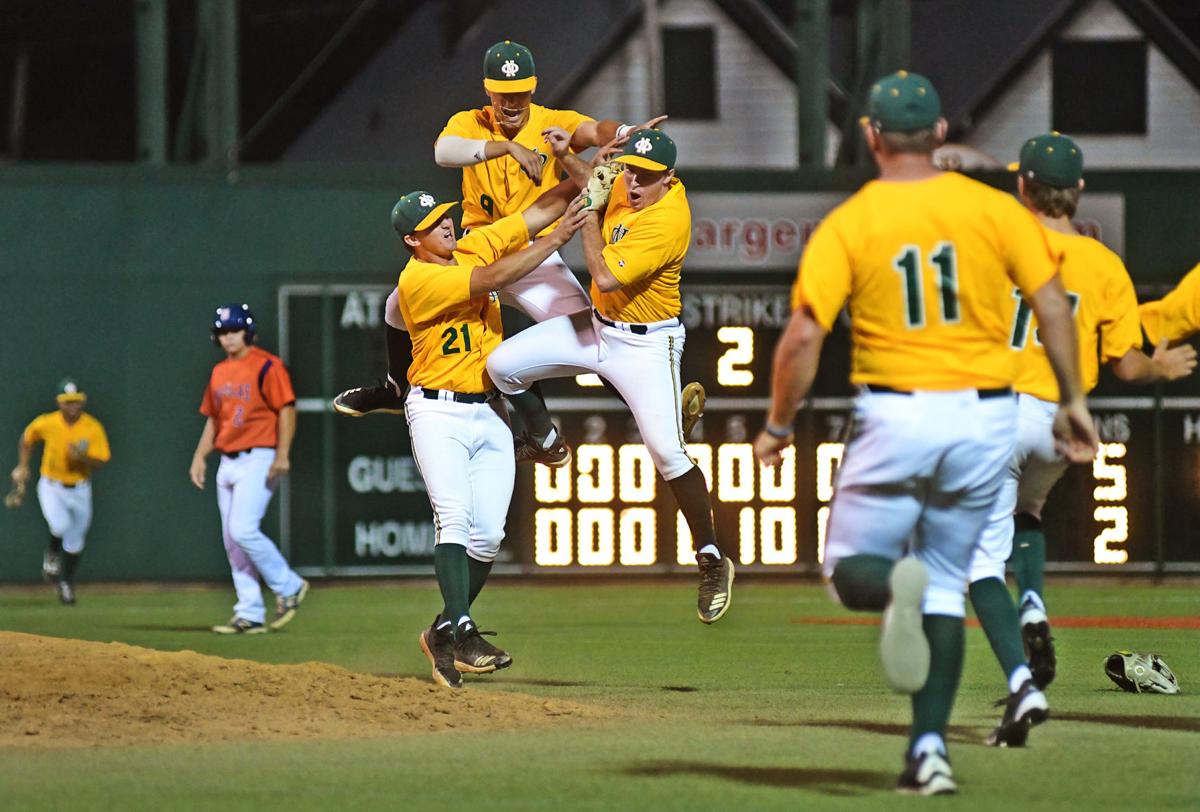 Members of the New Orleans Boosters celebrate after getting the final out in the 5-2 win over Martella’s Pharmacy in the AAABA championship game Saturday, August 10, 2019, at Sargent’s Stadium at the Point.

Members of the New Orleans Boosters celebrate after getting the final out in the 5-2 win over Martella’s Pharmacy in the AAABA championship game Saturday, August 10, 2019, at Sargent’s Stadium at the Point.

A rematch of the 2018 AAABA Tournament championship game unfolded on Saturday night at Sargent’s Stadium at the Point.

“It feels really good considering what happened last year and the way the game was unfolding,” Dares said after the Boosters overcame a one-run deficit by rallying in the late innings of a 5-2 victory over defending champion Martella’s Pharmacy.

“I thought I was having a flashback to last year,” said Dares, whose team fell 3-2 in a game that set off a weeklong (some might say a yearlong) celebration in Johnstown.

“A left-hander on the mound, doing a very good job. We couldn’t get to him. We were going back and forth, fighting. We finally got to him in the eighth.”

Johnstown lefty Joel Colledge looked strong while keeping the Boosters at bay through seven innings. The Pitt-Johnstown hurler was having the same type of success left-hander Brady Walker had in winning last year’s title game.

But New Orleans displayed a knack for putting together big innings late in games as the week progressed.

On Saturday the Boosters took a 2-1 lead in the eighth on Greg Thompson’s two-run single and added three in the top of the ninth to pad the margin.

“Joel Colledge threw a heck of a game,” Martella’s manager Jesse Cooper said after the local Pete Vuckovich Award winner went seven-plus innings. “I couldn’t be prouder of him. He’s an unbelievable competitor.

“That’s why you put him out there.

“It stinks to come up short in that situation. A few things I’d like to have back obviously as a coach. But you’ve just got to hand it to New Orleans.

“They went out there and played nine innings of great baseball and were able to come out on top.”

AAABA Tournament MVP Grant Schulz had a key run-scoring double in the ninth. He went 2-for-4 with two runs in the game and had a .429 batting average (12-for-28) with 13 RBIs, second highest in the tournament.

“We came out here, a different team, but we all came together as one and did what we were supposed to do,” said Schulz, who played in his third tournament. “Timely hits. Great pitching. I have to tip my hat to our pitchers this week. They did their job on the mound. Our hitters definitely came up big late in tight games.”

In the top of the fifth, Mike Stutes singled and moved up via a sacrifice bunt. Schulz lifted a solid drive that appeared headed to left field. Martella’s shortstop Jake Swank leapt and extended his glove, made the catch and threw to Jake Ansell at second base to complete an inning-ending double play.

“We played well through seven innings,” Colledge said. “We just fell apart one inning and we couldn’t recover. We made some great plays out there when I was pitching. The defense was good.”

Ty Diehl walked to open the bottom of the fifth and moved up on Ansell’s ground out. Adam Cecere walked and Dylan Gearhart singled to center, driving in Diehl with the game’s first run.

Omar Ward singled to load the bases again, but New Orleans second baseman Brandon Duhon made a running catch as Phillip Dull’s pop up was headed toward the turf. Duhon doubled up Gearhart to end the inning.

In the eighth, Schulz singled and Brayden Jobert was hit by a pitch, chasing Colledge.

Reliever Gearhart threw a complete game in a 7-3 win over Maryland State on Tuesday. He hit Ross Scelfo with a pitch to load the bases and Thompson followed with his two-run single to left.

“It’s contagious,” Dares said. “Once you break the seal, kind of, everybody gets in the mix.”

In the ninth, Stutes and Duhon each singled, and Schulz doubled to right field for one run. A wild pitch and Jobert’s single plated two more runs.

“Grant has had three good years up here,” Dares said of Schulz. “He said, ‘Coach, I’m not trying to be selfish, but it’d be nice if I could end it with a championship and MVP.’

“Early in the night we had first and second and he was up. He said, ‘Coach, whatever you want me to do.’ I wasn’t going to bunt him but just that sign of maturity for him to even think that way shows how far he’s come the last three years.”

Martella’s is 11-1 in the past two AAABA Tournaments with the city’s first championship in 2018. The franchise has won six straight league playoff titles and has been in 11 straight tournaments.

“That’s one heck of a run,” Cooper said. “It speaks a lot about their character. Sometimes things aren’t going so great for us but they come together.

“We have a lot of leaders on this team. We recruit leaders. That’s what they were able to show this year.”

In addition to Schulz taking MVP honors, other awards went to:

The New Orleans Boosters prevented Martella’s Pharmacy from repeating as champion in the 75th annual AAABA Tournament in front of an estimated 4,500 fans at Sargent’s Stadium at the Point on Saturday night.