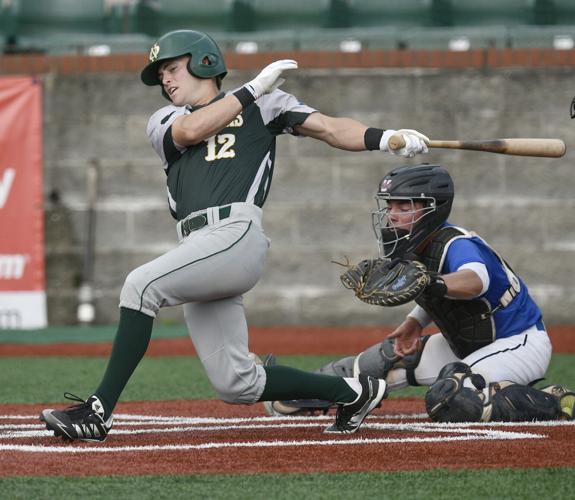 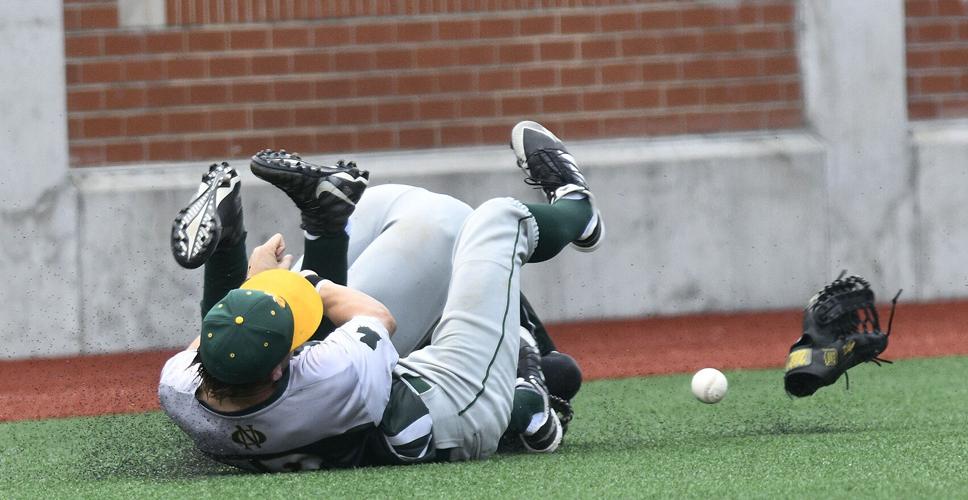 New Orleans left fielder Brady Faust (top) collides with center fielder Bryan Broussard in left-center field as they were trying to field a fly ball in the fifth inning against New Brunswick during AAABA action at Sargent's Stadium on Thursday, August 4, 2022.

New Orleans left fielder Brady Faust (top) collides with center fielder Bryan Broussard in left-center field as they were trying to field a fly ball in the fifth inning against New Brunswick during AAABA action at Sargent's Stadium on Thursday, August 4, 2022.

The Boosters were coming off their first loss in tournament play since 2018, a walk-off defeat at the hands of Philadelphia. Falling behind by three runs through five innings to the Matrix only added fuel to the fire.

This deficit was short-lived, however, as New Orleans outscored New Brunswick by eight runs over the final four innings to claim an 11-6 victory and earn a spot in Friday’s semifinal round.

“We talked about how we started off slow and became better as we moved on,” said Latino, whose team also defeated New Brunswick in the 2021 title game. “We had a little trouble facing their starter, but when we came to their bullpen, we just went off from there. Our guys went hard, and that’s all I can ask.”

New Orleans will face Johnstown-2 Martella’s Pharmacy, which defeated Philadelphia 11-5, at 1:30 p.m. Friday at Sargent’s Stadium at the Point.

The Boosters, who are the two-time defending tournament champions and winners of three of the past four, have now made the semifinal round every year since pool play began in 2016.

“The whole game, I knew we were going to come back, because we have the best lineup out here,” Boosters infielder Norris McClure said. “It’s all about getting to the next guy. When it got to me, I just stayed composed and did the job the best I could. Our team knows how to hit and adjust in any situation. We’re just doing our best to get back to Saturday.”

McClure capped off a four-run seventh inning for New Orleans by hitting a two-run double to put the Boosters in front 7-5.

New Orleans added insurance with a run in the eighth and three in the ninth to pull away. The Boosters were helped by a 15-hit performance by their powerful lineup, which had six players each tally two hits.

The Boosters also took advantage of four errors and four hit batsmen by New Brunswick, with two of the miscues coming in the seventh in which New Orleans took the lead for good.

“Frankie didn’t do that in his outing.

“They started getting freebies, with a couple mistakes in the field, and that put them in front. We just couldn’t catch up.”

Sanchez, the Matrix’s starting pitcher, allowed three runs (all earned) over six innings. He walked two and struck out six while throwing 107 pitches.

Right before Sanchez was removed, New Brunswick was able to build a 5-2 lead by way of a four-run fifth inning, highlighted by Gianni Marano’s two-RBI double.

The Boosters (3-1) struggled early offensively, being unable to bring home a runner from third base with less than two outs in the first and third innings. New Orleans, while stranding 13 runners on base, also ran itself into a double play in the fifth that nixed a leadoff double by Brady Faust.

“We ended up with 11 runs on the board, but there were a lot of missed opportunities still out there,” Latino said. “We hit the ball well enough to get to where we needed to be, and that’s all that matters. (Kaile) Levatino got us in the position to stay ahead of New Brunswick in multiple ways.”

New Orleans reliever Levatino earned the win on the mound after allowing just one run on two hits over the final four frames. He struck out four and did not allow a walk.

“All I told myself was to do my best to keep us in the game,” Levatino said. “Our hitters broke it open. My job then was to keep us in front. The umpire was giving us the outside corner, so I stayed out there as much as possible. He gave me an inch, so I took the inch. It’s time for us to recover from that defeat and keep going.”

The Matrix closed their tournament run at 3-1.

“This is the crown jewel for us every year,” Fredricks said.

“No matter what happens at home, we always look to finish our season up in Johnstown. It just kills me because this is the fourth time we’re going home at 3-1 after double elimination (was eliminated after the 2015 tournament). We’ll just have to put together a new squad and come back next year.”