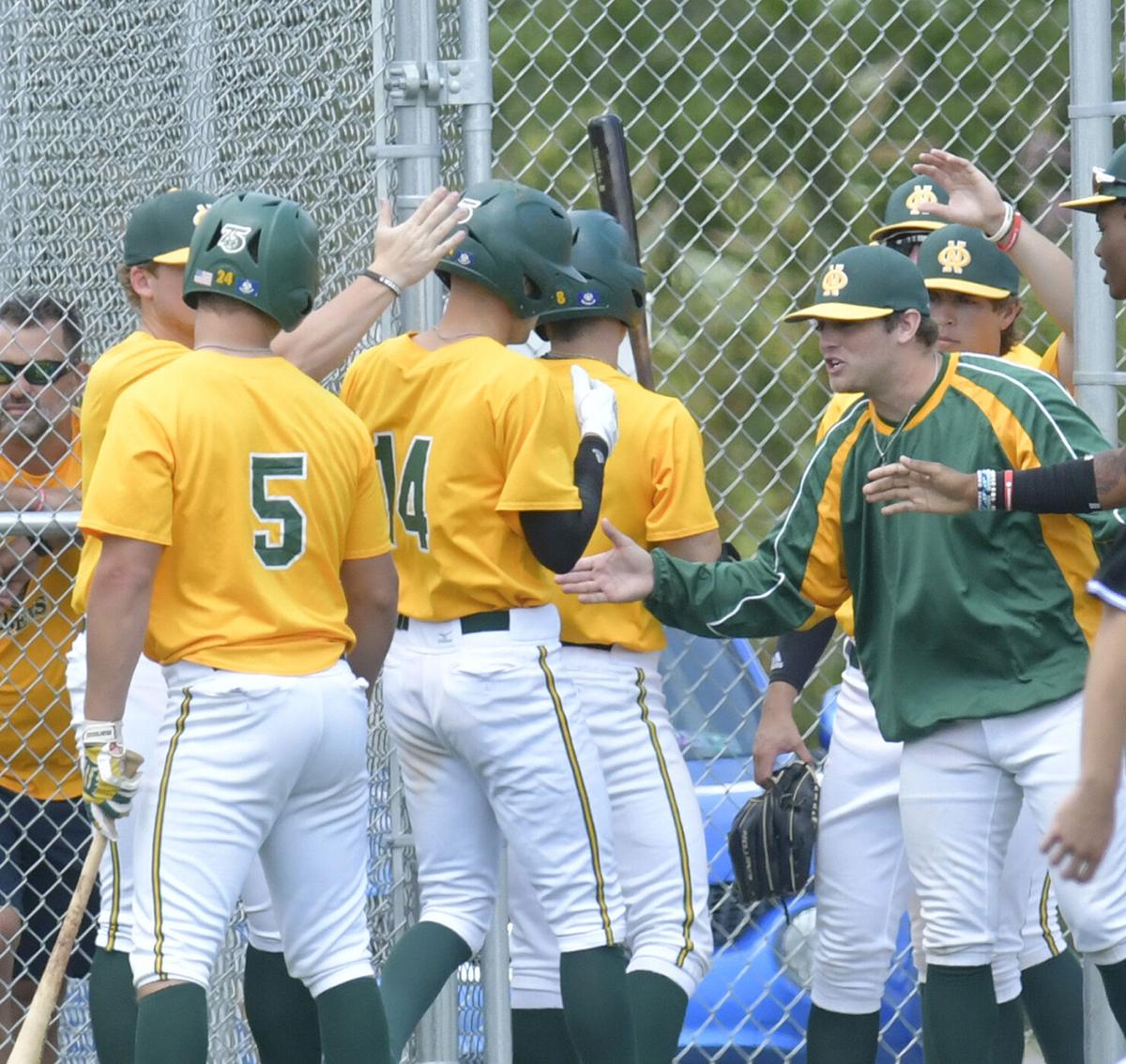 New Orleans Boosters celebrate in the fifth inning of their AAABA Tournament game with the Columbus TNT Knights on Tuesday, Aug. 3, 2021, in St. Michael. 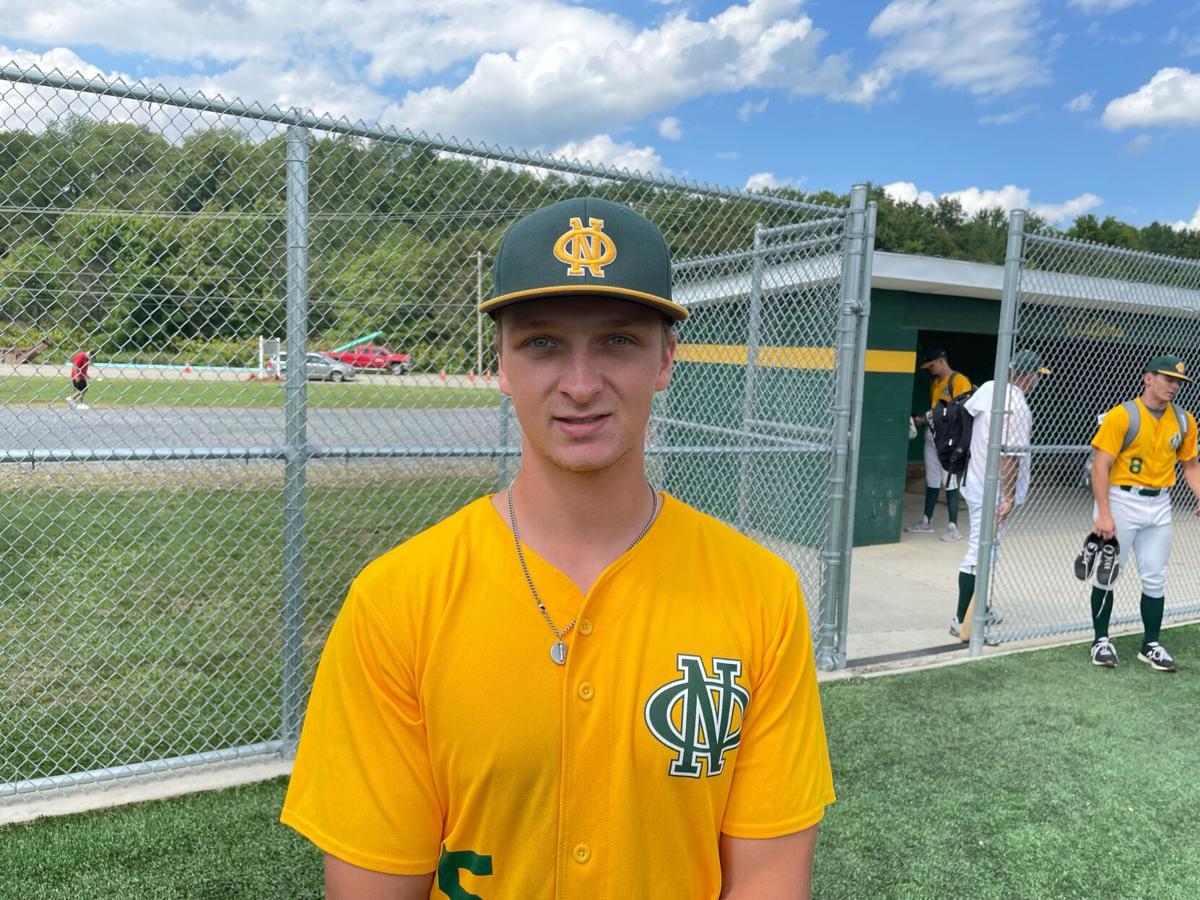 New Orleans Boosters celebrate in the fifth inning of their AAABA Tournament game with the Columbus TNT Knights on Tuesday, Aug. 3, 2021, in St. Michael.

ST. MICHAEL – Two-out lightning struck again for New Orleans at the most opportune time during Tuesday’s Pool A contest against Columbus at Forest Hills High School.

In the bottom of the sixth inning, a borderline call went the Boosters’ way to give the 2019 AAABA Tournament champions a one-run lead.

“It definitely shows our versatility in our lineup,” said Singletary about his team scoring all of its first 11 runs with two outs. “That’s just how deep our lineup can go.

“We just don’t quit. When we get two outs, we don’t go down. We don’t think the inning’s over at all.”

A full-count pitch to Brennan Lambert near the inside corner was called a ball as New Orleans retook the lead at 7-6.

“We were ahead there for a while, and it was a really good ballgame back and forth, two really good ballclubs,” Columbus manager Dan LePara said. “A call didn’t go our way. Even the umpire looked over and patted his chest and said, ‘That’s my fault.’ That’s a tough situation for that to happen, but their response was unbelievable.

“Then they took advantage of it with a huge home run. That’s where it started getting out of hand.”

On a 1-1 fastball down and in from Joe Tootle in a right-on-right matchup, Singletary launched a laser over the fence in left to cap a game-breaking inning.

“They had a mound visit right before my at-bat and I went back to the on-deck circle, talked to (Josh) Alexander, and he told me, ‘Hey, see your pitch, one pitch only.’ Fortunately, I got that pitch and it was a great moment right there,” Singletary said.

The Boosters added a trio of runs in the eighth.

Columbus finished with a 13-10 advantage in hits, but New Orleans held a 12-2 edge in walks drawn.

New Orleans 6-foot-7 left-hander hurler Turner Toms entered the game in the fifth inning and blanked Columbus over the final 31/3 innings, striking out two and allowing two hits to prevent any comeback from happening.

“We saw their lineup, they had a good amount of lefties in there, so we wanted to get it to the middle innings and turn it over to Toms. We were able to do that and get the lead. He just settled in from there, just threw strikes and let his defense play.”

Columbus starting pitcher Matt Kahn completed an immaculate inning in the bottom of the first. The right-hander struck out the side on nine pitches.

In the bottom half, New Orleans tallied four runs. Singletary was hit by a pitch with the bases loaded, and Alexander cleared the bases with a rope to right field.

Columbus netted three runs with two outs in the fifth. Salinas brought home a run with a single to right field.

Maxwell Steffen followed with a two-run single to left to lead 6-5.

Despite not playing a clean game, New Orleans battled and found a way to respond.

“We were kind of the opposite of what we were yesterday. We were very clean with everything yesterday,” Latino said. “Today, we kicked it around a little bit. Give Columbus a lot of credit.

“They had some great at-bats. We made some quality pitches, I thought, that they were able to get a good piece of the barrel on.

“The thing I thought we did well was we didn’t allow them to get too much separation. We kept it close, and once we were able to take the lead, I felt the momentum came back on our side and our guys did a great job of picking each other up.”

“We got three good arms slated for tomorrow and a really good lineup top to bottom with a lot of depth,” LePara said. “We’re looking forward to it.”Maximizing innings propelled New Orleans.

“It’s showing that we’re staying tough, even with two outs, and we preach that to the guys,” Latino said. “When you’re down to your final out or even your final strike, just keep competing, keep fighting off pitches, keep working and eventually things may turn your way. Today, they did.”

Sparked by a six-run rally in the bottom of the fifth inning, and a game-ending home run by Jared Singletary in the seventh, the New Orleans Boosters opened their 75th year as part of the AAABA Tournament the same way that they ended their 74th trip: By beating Martella’s Pharmacy.