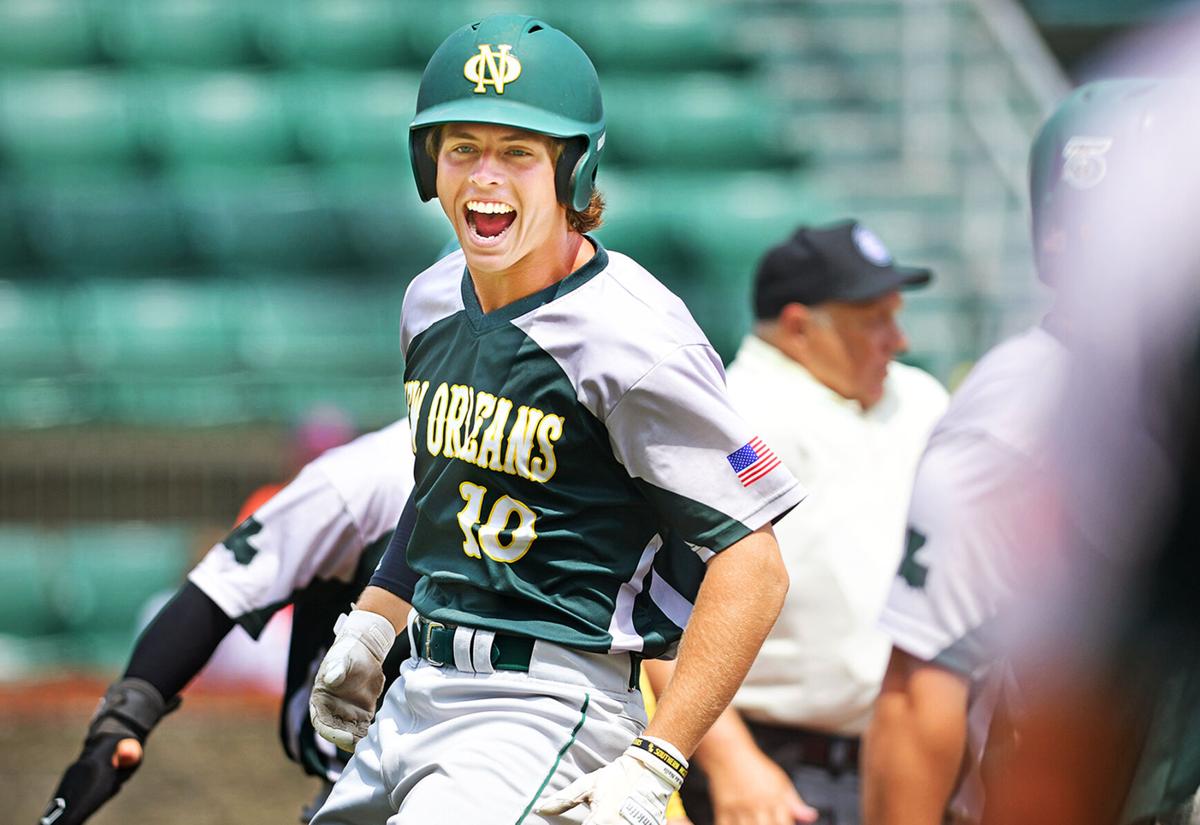 New Orleans Boosters' Brady Faust celebrates after scoring in the eighth inning during their AAABA Tournament game against Philadelphia Bandits at Sargent's Stadium at the Point on Friday, Aug. 6, 2021. 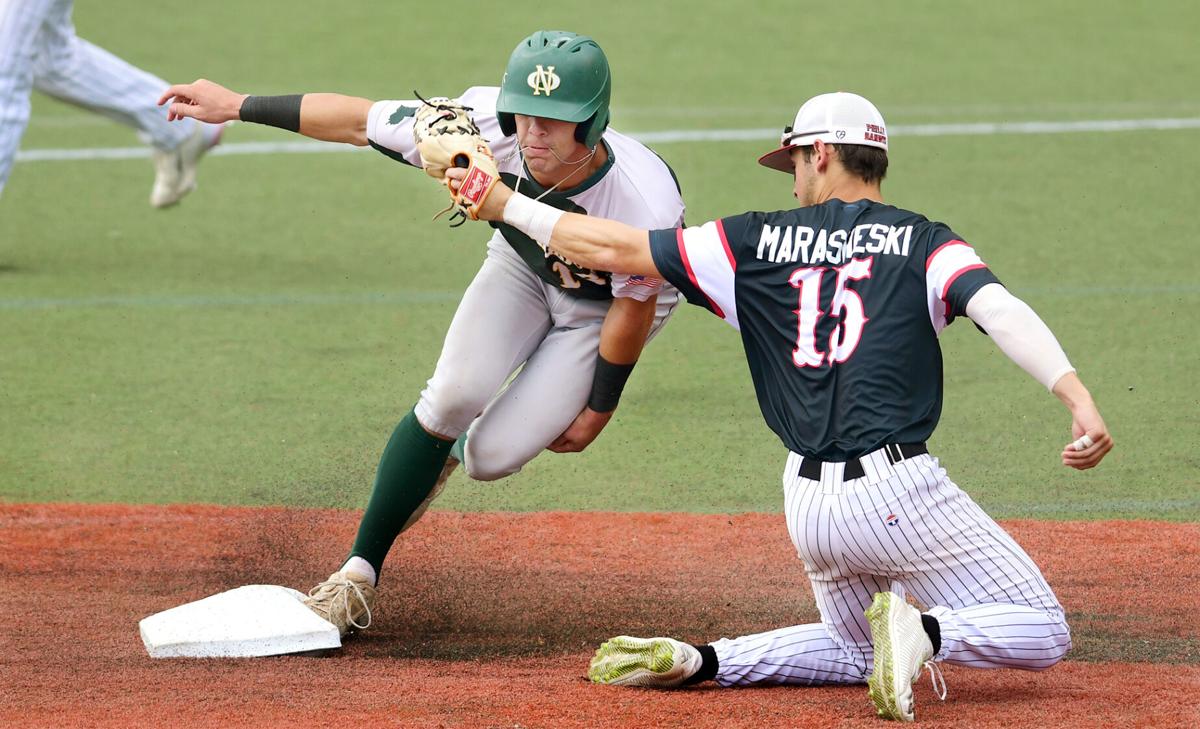 New Orleans Boosters' Christian Westcott steals second base as Philadelphia Bandits' shortstop Eric Marasheski tries to apply the tag in the third inning during their AAABA Tournament game at Sargent's Stadium at the Point on Friday, Aug. 6, 2021.

New Orleans Boosters' Brady Faust celebrates after scoring in the eighth inning during their AAABA Tournament game against Philadelphia Bandits at Sargent's Stadium at the Point on Friday, Aug. 6, 2021.

New Orleans Boosters' Christian Westcott steals second base as Philadelphia Bandits' shortstop Eric Marasheski tries to apply the tag in the third inning during their AAABA Tournament game at Sargent's Stadium at the Point on Friday, Aug. 6, 2021.

JOHNSTOWN, Pa. — In the 75th anniversary of New Orleans’ first trip to the AAABA Tournament, the Boosters came to Johnstown with one goal – to win a championship.

The Boosters moved one step closer to being crowned champions yet again on Friday afternoon, as New Orleans, after clinging to a one-run lead through seven innings, erupted for 14 runs over the final two frames to defeat Philadelphia 20-5 in a semifinal matchup.

The win marks New Orleans’ 29th overall appearance in the title game, including the Boosters’ fourth in a row and fifth in the past six tourneys.

“We have to bring the same energy,” said New Orleans outfielder Josh Alexander, who went 4-for-6. “It’s another huge game for this franchise, and we worked very hard to get here.

“Winning a championship is what we came here to do, and we’re just one step away.”

New Orleans (5-0) will face New Brunswick in the championship game at 6 p.m. Saturday.

“If we pitch it well, play error-free baseball and we’re aggressive offensively, but disciplined, I feel like we have a pretty good chance,” New Orleans first-year manager Joey Latino said. “The same as today. We take great pride in being able to advance this far, and it’s something we don’t take for granted. I feel we have the tools – hitting, pitching and fielding – to be effective tomorrow.”

The Boosters pounded out 19 hits, headlined by Alexander, who came up a triple short of the cycle after hitting a two-run home run in the second inning, an RBI single in the third and a two-run double in the eighth.

Alexander, who led the Boosters with five RBIs, was also one of four New Orleans players with three or more hits, and one of seven that scored at least twice.

“A bunch of us had a lot of big at bats in big situations,” Alexander said. “I’m glad I was able to do my part. It’s very impressive what we’re able to do at the plate, we’re able to fill it up one through nine in the lineup.”

“We did what we were supposed to do,” Latino said. “Going deep into the bullpen, that’s how the game is going to turn sometimes. That’s a very talented Philadelphia club, and unfortunately the game just got away from them. We were in a dogfight, we really were.”

New Orleans’ offense jumped on Philadelphia starter Justin Hughes early, scoring five runs over the first four innings. The Boosters then held a 6-2 lead going to the bottom of the fourth, before the Bandits tallied three more runs an an RBI double by Eric Marasheski and a two-run single from Owen Petrich to cut the deficit to 6-5.

Relief pitcher Turner Toms entered the game for the Boosters in the fifth, and kept the Bandits’ bats at bay for the remainder of the contest.

The 6-foot-6 left hander threw his second scoreless relief outing of the tournament, going five innings to close the game, earning the win while scattering five hits, walking one and striking out three.

“I just came in, threw strikes and let my defense work,” Toms said. “It was 6-5, but I knew eventually we’d start hitting if I threw strikes and did my job. I was trying to overpower them with my fastball and pitch to contact, and it worked out well. I always go out with intensity and confidence knowing my team is behind me.”

Philadelphia (4-1) advanced a runner to third on two occasions against Toms, but were unable to push across any runs. The Bandits closed with 13 hits.

New Orleans scored three times in the eighth before sending 17 batters to the plate to tally 11 runs in the ninth off of three Bandits relief pitchers.

“If you look back in the seventh when it was a 6-5 game, we had 13 hits and they had 12,” Philadelphia manager Greg Olenski said. “They just had bigger hits with runners in scoring position than we did. We got runners on base, we just didn’t get the big hit we were looking for. We pushed aggressiveness all year, force the other team to make plays, and they did.”

Olenski said he is looking forward to bringing the Bandits back to next year’s tournament.

“That’s all we want to do every year when we come out here, is be a competitive team.” he said. “We obviously want to go as far as we can. Playing here means a lot to these guys, and we’re going to be able to return 75% of our roster next year. We’ll be back.”