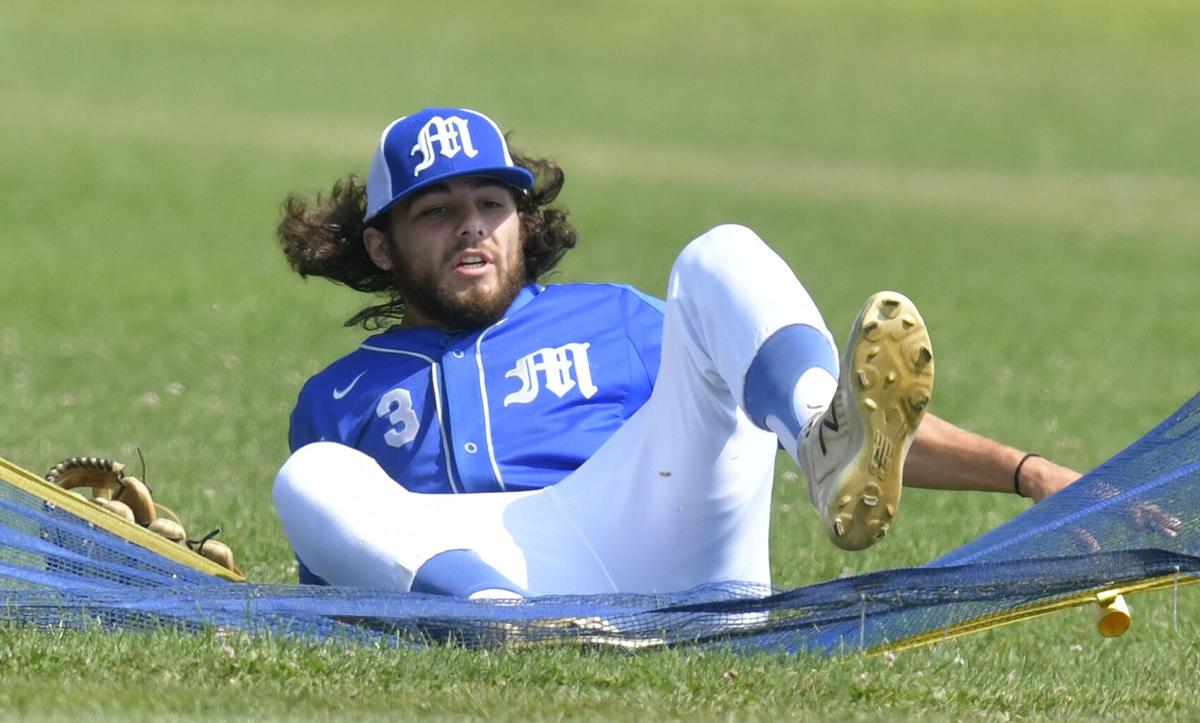 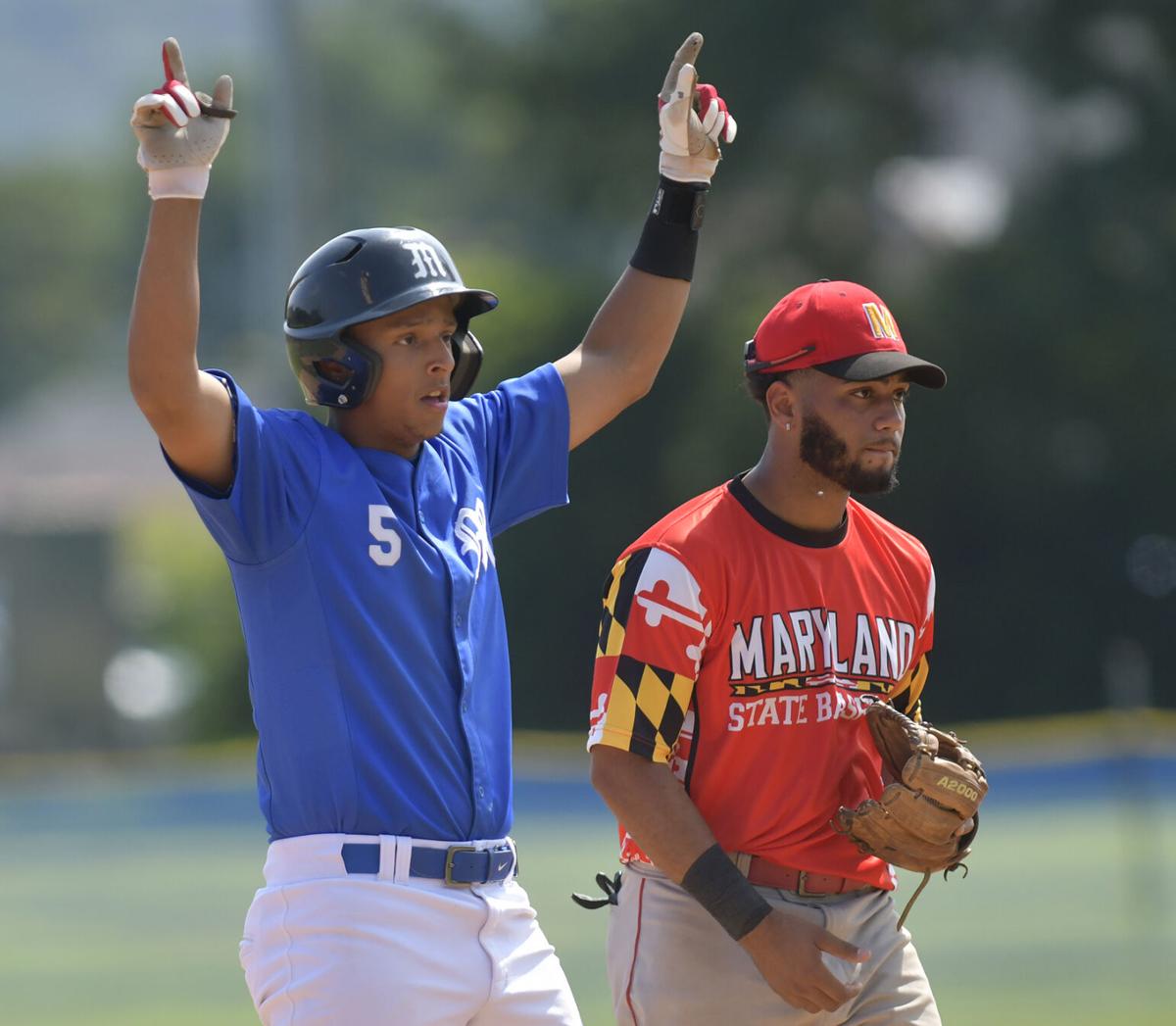 New Brunswick left fielder Christian Petrillo falls back into the temporary fencing after making a spectacular run saving catch in the 2nd inning against Maryland State on Thursday, August 5, 2021.

New Brunswick left fielder Christian Petrillo falls back into the temporary fencing after making a spectacular run saving catch in the 2nd inning against Maryland State on Thursday, August 5, 2021.

JOHNSTOWN, Pa. – “Pitching and defense” is an old adage in the game of baseball, but one that still rings true.

Those two elements led New Brunswick to a 2-1 victory over Maryland State in the quarterfinal round of the 76th AAABA Tournament at Roxbury Park on Thursday.

The New Brunswick Matrix pitching tandem of Frankie Sanchez and Justin Gilman combined to strike out 14 batters while allowing only five hits and just one run. They also managed to strand 10 batters on base in a tight one-run decision.

“I think location and mixing speeds,” Matrix manager Glenn Fredricks said of what was working for his two pitchers on Thursday. “That is a really good team over there. They are very scrappy and they play our kind of baseball, they play a Jersey-style of baseball and from this side when you take a look at it, it’s nice to see two good teams get after each other like that.”

He went all eight innings for his team and fanned 10 batters and scattered eight hits.

“He kept them off-balance. To lose a game 2-1, hey, he pitched well and that’s what we know we were going to get out of him.”

The scoring in this game happened early on for both sides.

New Brunswick struck in the bottom of the first as Justin Scotto singled to lead off the frame, and Brad Edwards Jr. doubled him in to make it 1-0.

New Brunswick’s Christian Petriello made a leaping catch in left field to rob a potential home run in the second inning.

Maryland State got in the scoring column in the top half of the third. Elijah Henible bunted for a base hit, and eventually stole third. He came home on a throwing error to knot the contest up at 1.

It was also a defensive mistake that gave the lead right back to New Brunswick the next half inning. Petriello singled and stole a base, but an error by the shortstop allowed him to score to give the Matrix a 2-1 lead in the bottom of the third inning, which held for the remainder of the game.

Maryland State had opportunities to tie it up, but failed to do so. An apparent run in the fourth inning was negated due to batter’s interference. Jordan Daddio broke for the plate on a wild pitch and would have scored, but the batter never stepped out of the way of the play and the runner was ruled out.

Later on in the sixth, Denny Tavarez launched a deep fly ball to right field. James Halladay tagged up to score, but was nabbed at the plate by a great throw from right fielder Steve Yelin and an equally as impressive tag from catcher Kyle McSorley.

Maryland State failed to generate many more chances after that, as Gilman was in cruise control. The left-hander from New Brunswick pitched the final 51/3 innings and struck out six batters and only allowed two hits on his way to picking up the win.

Despite the victory, Fredricks would have liked to see a little more from his offense. The Matrix left nine runners on base in the game.

“A win is a win obviously,” he said, “but you’d like to add insurance when you can when your pitchers and your defense are playing like that. You absolutely have to cash in.”

Taylor shared those frustrations from the losing end. His team left 10 on base, and failed to get to New Brunswick starter Frankie Sanchez, who walked four batters and hit two more, early.

New Brunswick advances to the semifinal round for the first time since 2018 and will leave it all on the line to make its first championship appearance since 2012.

“We’ve came this far, right? We played all school season, all summer long, now we’ve got to do whatever we’ve got to do to get through nine innings to get to that championship game. So we’re going to give it our best shot.”

New Brunswick (3-1) will meet 4-0 Paul Carpenter Capital Advisors in a 7 p.m. Friday semifinal at Sargent's Stadium at the Point. Paul Carpenter edged New Brunswick 5-4 on Monday night on Austin Homer's walk-off single in the bottom of the ninth inning.

After an uncharacteristic slow start, Maryland State found its offensive groove and received more solid relief pitching as Crabfest earned a 6-5 victory over the Youngstown Creekside Crocodiles on Wednesday afternoon.