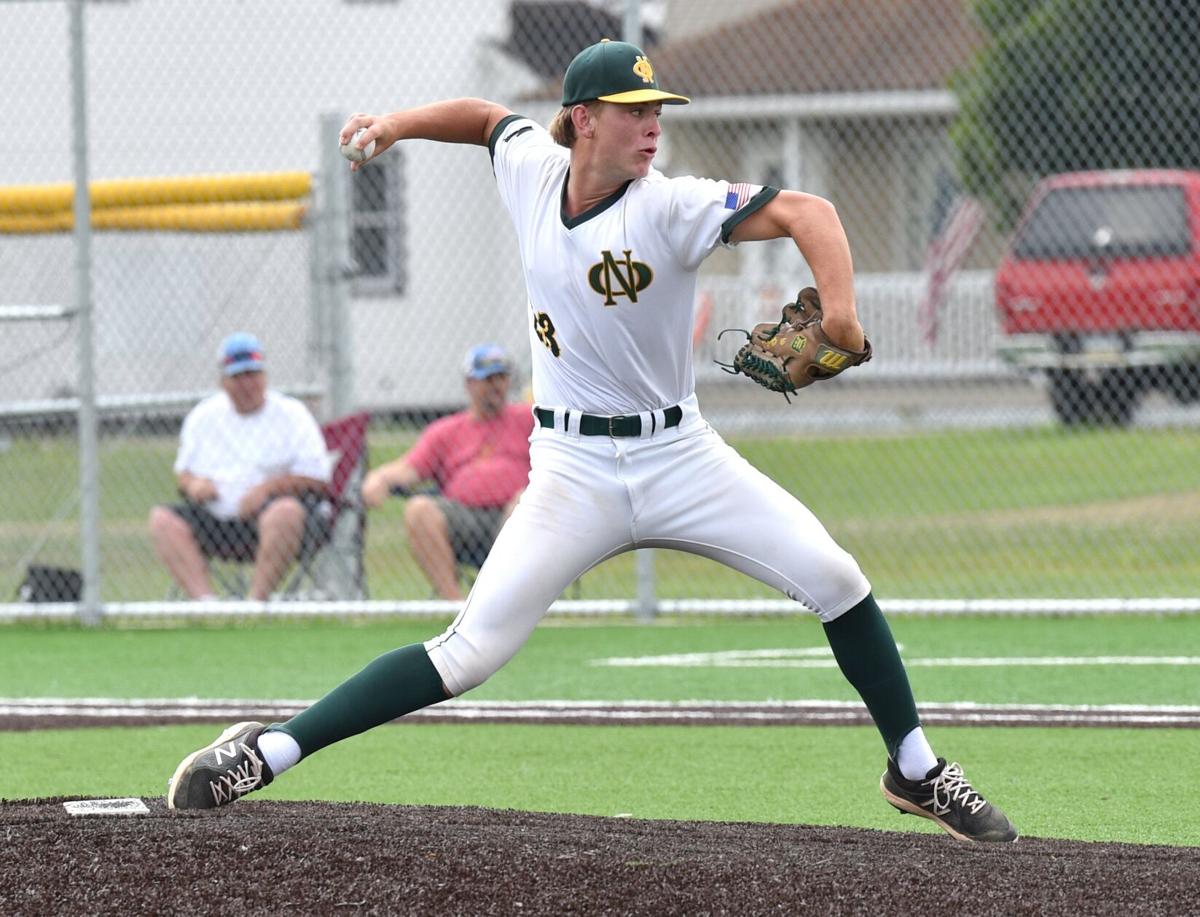 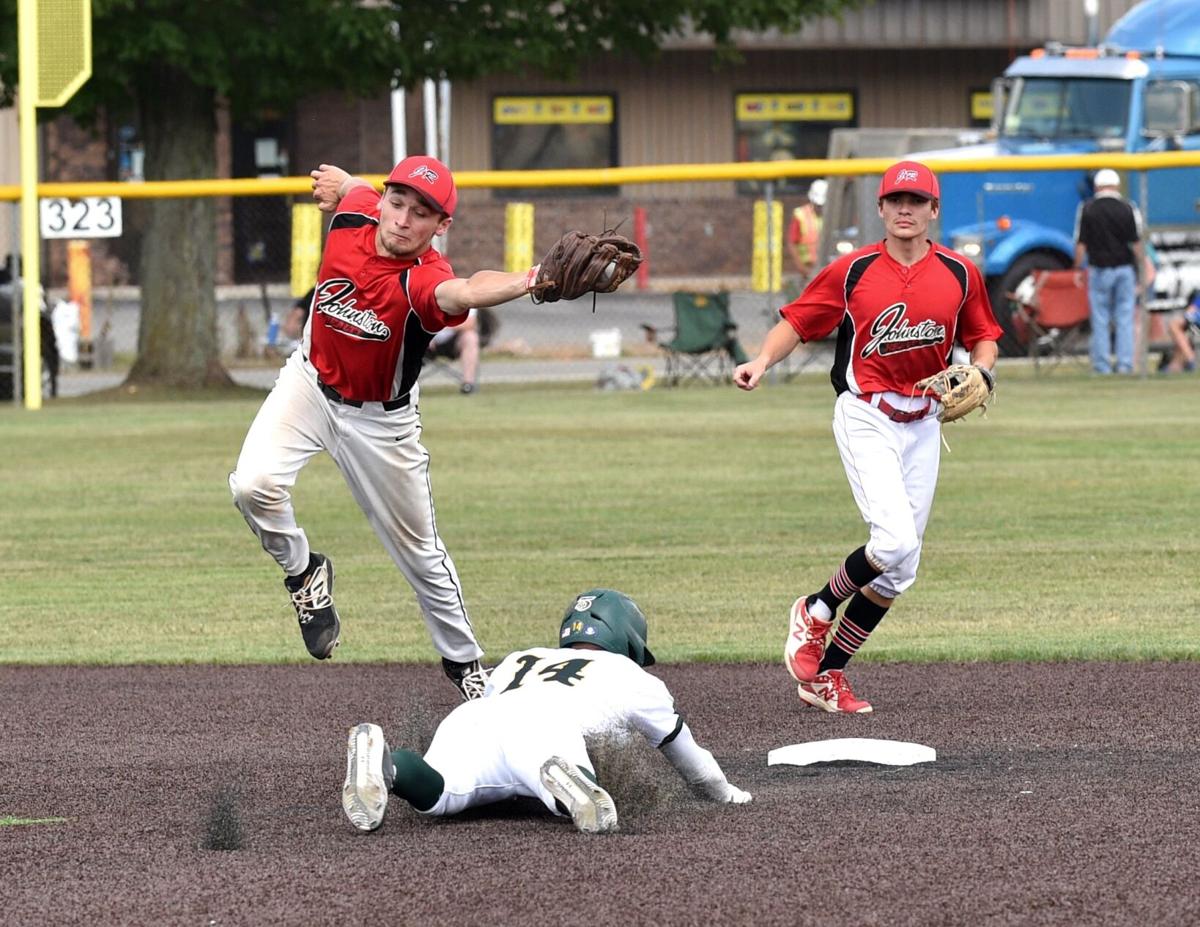 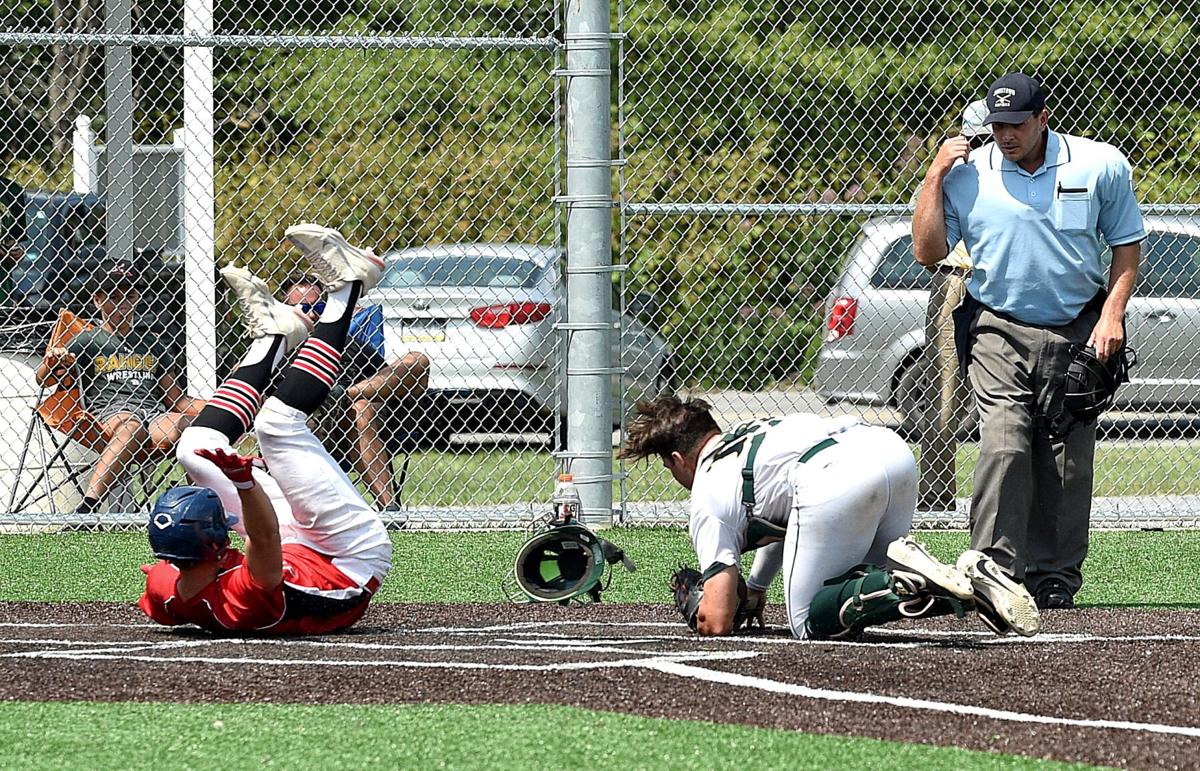 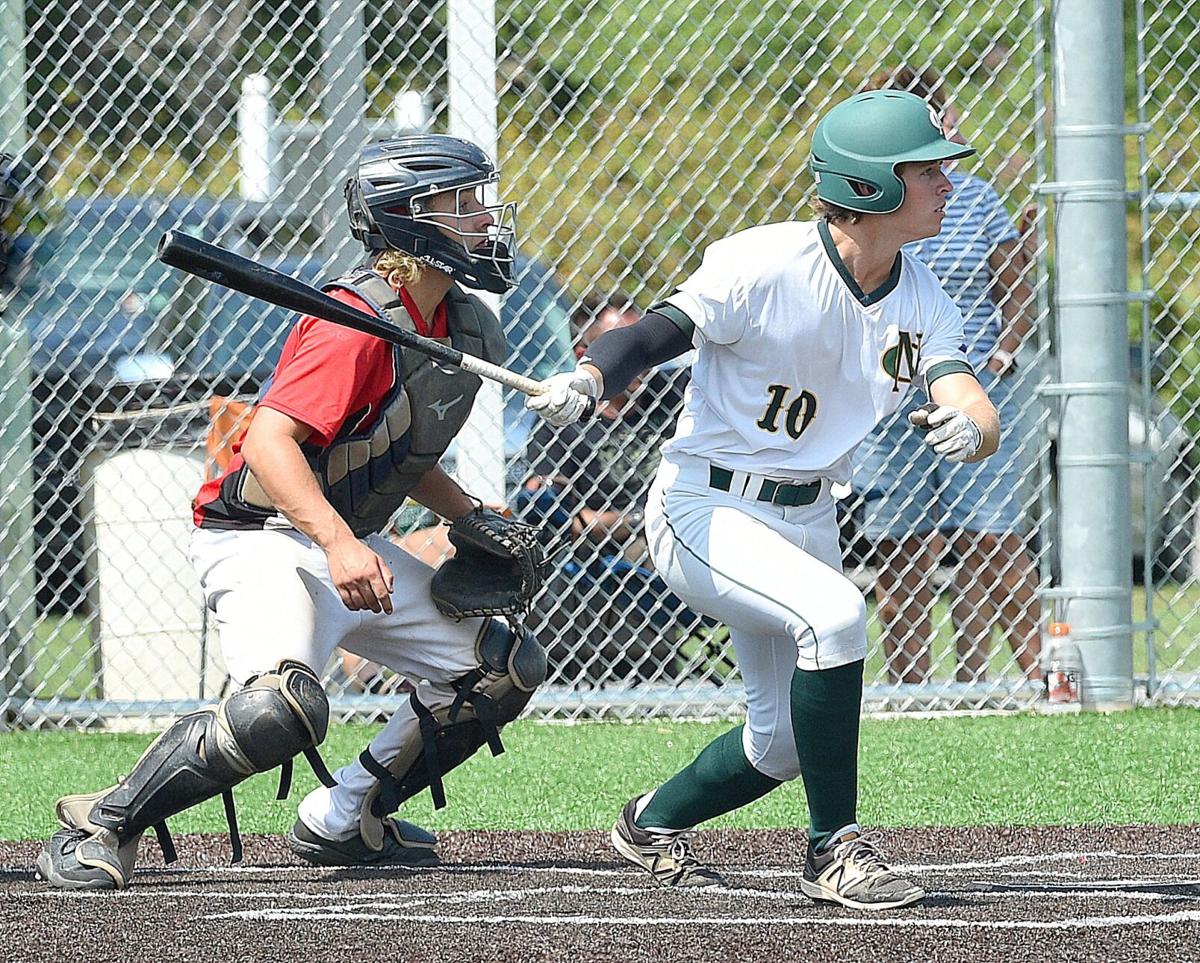 New Orleans' Brady Faust stokes a double in the bottom of the eighth inning in front of Altoona catcher Joey DeRubeis to drive in two runs to end their AAABA Tournament game on Thursday, Aug. 5, 2021, at Forest Hills High School in St. Michael, Pa.

New Orleans' Brady Faust stokes a double in the bottom of the eighth inning in front of Altoona catcher Joey DeRubeis to drive in two runs to end their AAABA Tournament game on Thursday, Aug. 5, 2021, at Forest Hills High School in St. Michael, Pa.

ST. MICHAEL, Pa. – At the start of the AAABA Tournament, New Orleans hurler Dwain Guice was hampered by an elbow injury that kept him from pitching in the Boosters’ Pool A games.

By utilizing the past three days to rest, as well as throwing to regain his strength, Guice was able to make his first start of the tournament on Thursday in the elimination round, and he didn’t disappoint.

Guice tossed a complete-game shutout as New Orleans earned its fourth consecutive win with a 10-0 victory over Altoona-2 Johnston Realty shortened to eight innings because of the 10-run rule.

“Every day I’ve thrown, I’ve felt a lot better about myself,” Guice said. “It really gave me the confidence to be able to go out and throw the complete game. Once you get a lead, you have to keep your foot on the gas and keep playing your best, and that’s what I think we all did today, one through nine in the lineup and defensively.”

Guice used an effective four-seam and two-seam fastball combination to keep the Altoona hitters off-balance, recording six strikeouts and only allowing one walk.

He finished his outing throwing 99 pitches.

“He talked to me yesterday, and said ‘Coach, I’m ready.’ I had him in the starting role and told him just to give me what you can give me, and he gave me a complete-game shutout. You can’t get much better than that. We played great defense behind him, too, as well as getting timely hits.”

New Orleans’ defense played error-free baseball for the duration of the game. The Boosters also turned two double plays, both of which ended their respective innings.

Altoona put together its lone scoring chance in the team’s final at-bat of the game after Tyreke Green singled and Owen Kravetz was hit by a pitch with two outs. Jake Hunter then laced a base hit up the middle, but Green was thrown out at the plate trying to score by center fielder Bryan Broussard.

Altoona (2-2) recorded at least one hit in seven of its eight at-bats, but was unable to advance a runner past second base until the eighth inning. Altoona compiled nine hits off of Guice, all being singles. Brendan Baney was 3-for-3, while Green and Hunter each had two hits.

“It’s our first year together, we made it to the quarterfinals of the tournament and got beat by arguably the best team in the tournament. I have no complaints. My kids fought until the end and never gave up. I’m proud of them.”

On the other side, the New Orleans offense was headlined by its No. 2 and 3 hitters, Brady Faust and Christian Westcott, who combined for six of the team’s nine hits after both players tallied three apiece.

Faust also drove in a team-high three runs, while scoring twice and recording the game’s only extra-base hit, a two-run double in the bottom of the eighth that put the mercy rule into effect. Broussard produced an RBI single earlier in the frame.

“If you look at our first three games, it seems like every time there’s a new guy that’s picking it up and getting those three, four RBIs,” Faust said. “We all can get it done at the plate, today just happened to be my day. I just go in the box with the mindset of putting the bat on the ball and seeing good pitches.”

Westcott, after being robbed of a double in the first inning on a sliding catch in left field by Green, plated two runs on RBI singles in the third and seventh innings to boost the New Orleans offense, which earned its fourth mercy-rule victory in its four tournament games.

“It’s a family,” Westcott said. “This is what we came up here to do. It’s coming together right now, and we’re hot. The Boosters are rolling.

“There’s no pressure at all, we’re just playing baseball on a fun team. We came up here with one goal in mind and it’s not done yet.”

New Orleans opened the game’s scoring in the second by scoring four runs. After Altoona starter Austin Lewis opened the frame with three walks, Josh Alexander hit a single to right field to score Stephen Klein, while Brennan Lambert and J.T. Singletary also came around on an error in right field. Nick Lorio capped off the inning with an RBI groundout.

Westcott’s two run-scoring hits and an RBI knock for Faust gave New Orleans a 7-0 advantage before the Boosters’ three-run eighth ended the contest.

New Orleans (4-0) will now face fellow undefeated squad Philadelphia (4-0) in the semifinals on Friday, with hopes of advancing to its fourth consecutive tournament championship game.

“We absolutely want to be in this position year after year,” Latino said. “But, we know it takes an amazing amount of work, preparation and dedication to get here. The expectation is high, but we don’t ever take it for granted. This is something that’s earned, and this group of boys earned it. They’ve done a great job in terms of preparation, and we’re very fortunate to be moving forward to tomorrow.”

New Orleans players (left to right) Josh Alexander, Christian Westcott and Brady Faust discuss their family ties to the AAABA Tournament on We…