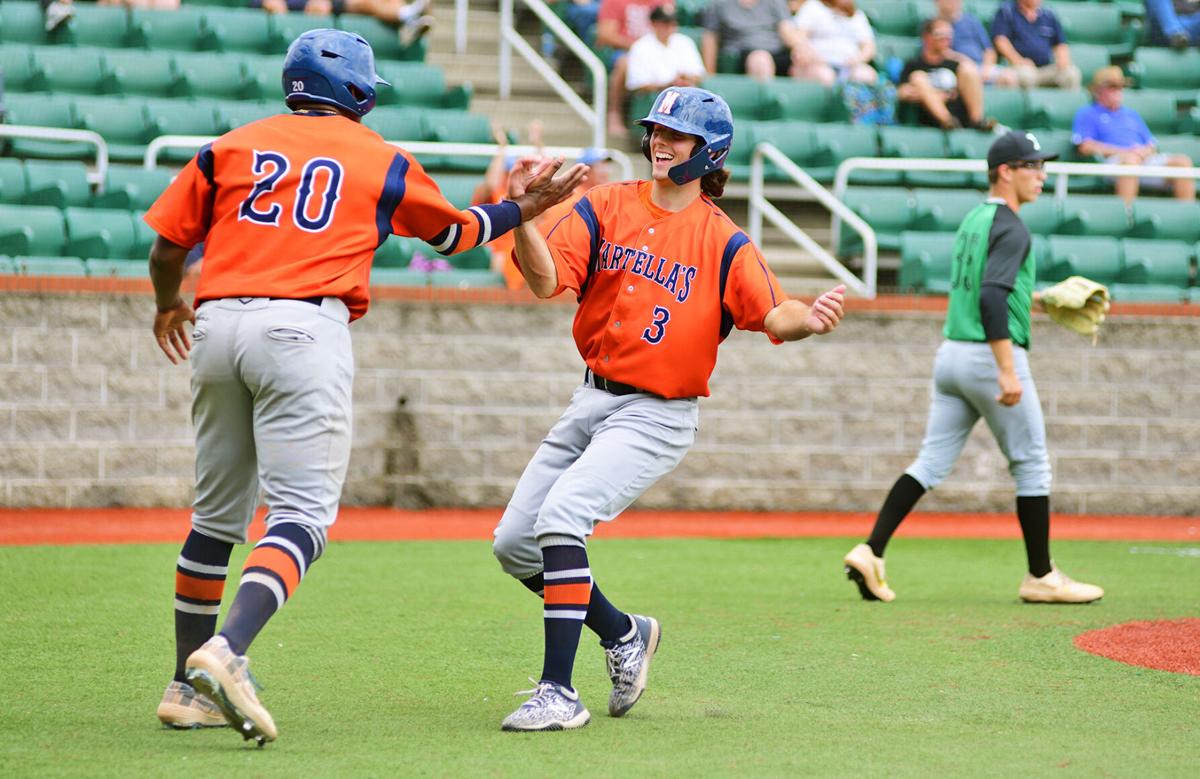 Martella's Pharmacy (Johnstown-2) teammates Jake Felton (center) and Omar Ward (left) celebrate after taking the lead in sixth inning during their AAABA Tournament game against the TNT Knights (Columbus) at Sargent's Stadium at the Point on Wednesday, Aug. 4, 2021. 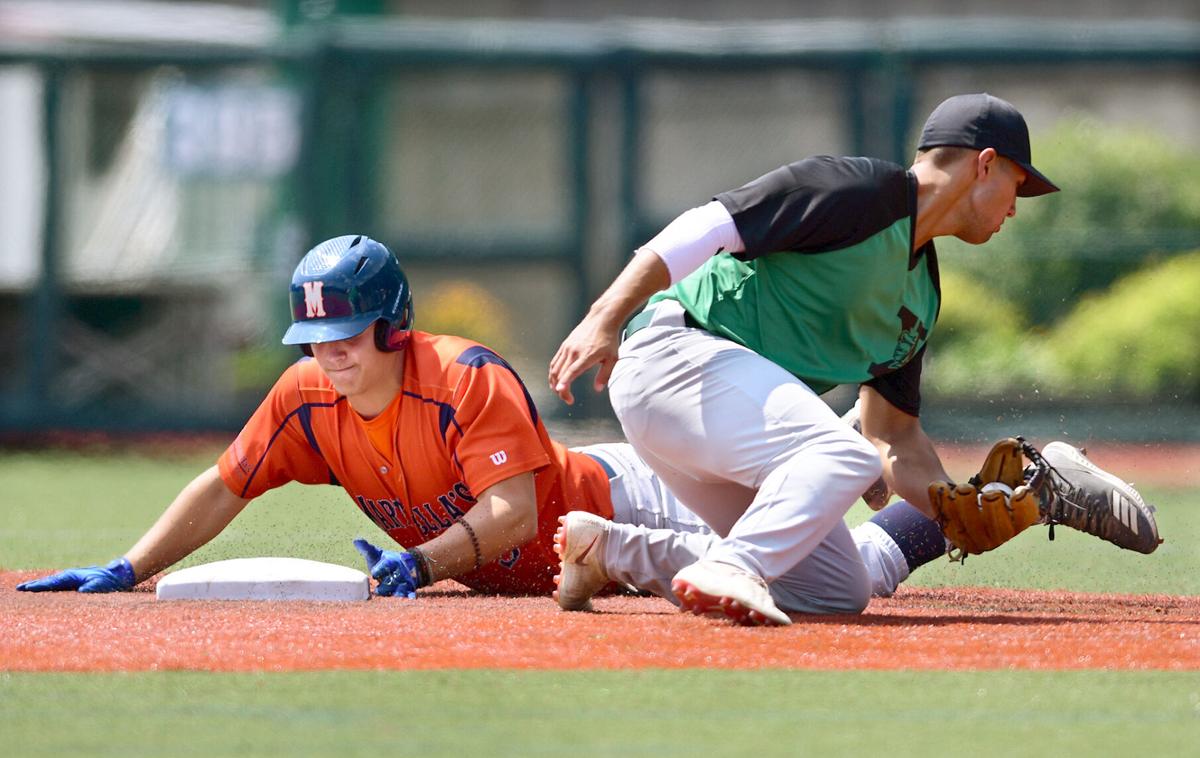 Martella's Pharmacy (Johnstown-2) first baseman Brent Morris slides safely for a double as TNT Knights’ (Columbus) Drew Salinas applies the tags in the second inning of their AAABA Tournament game at Sargent's Stadium at the Point on Wednesday, Aug. 4, 2021.

Martella's Pharmacy (Johnstown-2) teammates Jake Felton (center) and Omar Ward (left) celebrate after taking the lead in sixth inning during their AAABA Tournament game against the TNT Knights (Columbus) at Sargent's Stadium at the Point on Wednesday, Aug. 4, 2021.

Martella's Pharmacy (Johnstown-2) first baseman Brent Morris slides safely for a double as TNT Knights’ (Columbus) Drew Salinas applies the tags in the second inning of their AAABA Tournament game at Sargent's Stadium at the Point on Wednesday, Aug. 4, 2021.

JOHNSTOWN. Pa. – Martella’s Pharmacy was already trailing by a run when reliever Jordan Ford inherited a bases-loaded, no-outs jam during the fifth inning of Wednesday afternoon’s game at Sargent’s Stadium at the Point.

It wasn’t too long before a fielder’s-choice groundout and a wild pitch allowed two of those inherited runners to score to give the Columbus TNT Knights a three-run lead in the Pool A finale for both clubs.

Ford managed to escape further damage just before Martella’s Pharmacy went ahead to stay in the top of the sixth on their way to an 8-6 victory and a berth in the quarterfinals of the 76th AAABA Tournament.

Martella’s Pharmacy will face the Pool B champion Philadelphia Bandits, who topped the Zanesville Junior Pioneers 22-0 on Wednesday. Philadelphia went 3-0 in pool play, outscoring its opponents 48-0 over the first three days.

“We know we’ve got a fantastic opponent in Philadelphia,” Martella’s Pharmacy manager Kerry Pfeil said. “That’s a much-respected program by us. We’ve faced them in the last two tournaments, and hopefully we can get the best of them in 2021.”

The TNT Knights saw their first trip to the tournament end with a 1-2 mark in pool play after dropping the de facto elimination game.

“We learned a lot from it. We’ll be back next year and a lot of the guys are excited to be back. It’s quite an experience, and Johnstown’s been awesome.”

Ford, who entered the game in the fifth after reliever Brendon Bair walked the bases loaded upon entering the game, worked four innings and fanned five while keeping Columbus at bay.

“We knew it was an elimination game, so it was all hands on deck,” Ford said. “We knew what we had to do. We just had to execute well.”

Bair came on to relieve starter Omar Ward, who tossed 94 pitches over four innings while giving up four runs on five hits and striking out six.

“We felt like we really started slow,” Pfeil said.

“Omar Ward was effective on the mound, but just couldn’t get guys out in less than five pitches. He got his pitch count up. Once we brought in Jordan Ford, that really settled them down.”

After Columbus’ Reece Crabtree got Johns- town-2’s Zach Ramach to ground out to open the sixth, Jared Dowey cut into the Columbus lead with a towering home run that just cleared the screen in left.

Jake Ansell followed with an infield single just before Omar Ward picked up a base hit to right field. Ansell then scored when Jake Felton doubled to right, shrinking the Knights’ lead to 6-5 and ending Crabtree’s afternoon.

Against reliever Matt McElligot, the son of former Johnstown Chiefs and current Columbus Blue Jackets broadcaster Bob McElligot, Brett Morris’ rolling double to the wall in left-center chased in Ward and Felton to push Martella’s Pharmacy ahead by a 7-6 mark.

“That set the spark for the rest of the game,” Ford said. “We took the lead and didn’t give it up.”

Ford also cut down Columbus’ best chance at an answer in the bottom of the sixth when he left two runners on base with a swooping curve that caught Sebastian Silva looking.

Batting for himself in the seventh, Ford drew a walk before taking two more bases when an errant pickoff throw bounced out of play, and then scored on a wild pitch to set the final.

Columbus evened the score during the bottom of the third when Ty Helmke doubled to center to chase in Brayden Carter and Max Caron. Two more Columbus runs came in the fourth with an RBI triple from Joaquin Gutierrez and Carter’s groundout to second scoring Zade Fusselman and Gutierrez, respectively.

Johnstown-2 got one of those runs back in the fifth when Ward singled and later scored on a base hit by Dull.

Dull rapped out four of his team’s 15 hits, with Ward and Morris supplying three hits each.

Dowey, who hit for the cycle on Tuesday, picked up two hits in the win.

In a game that was a must-win for both Martella’s Pharmacy and Brooklyn-2 SAYO Grays, Jared Dowey became a must-see player.