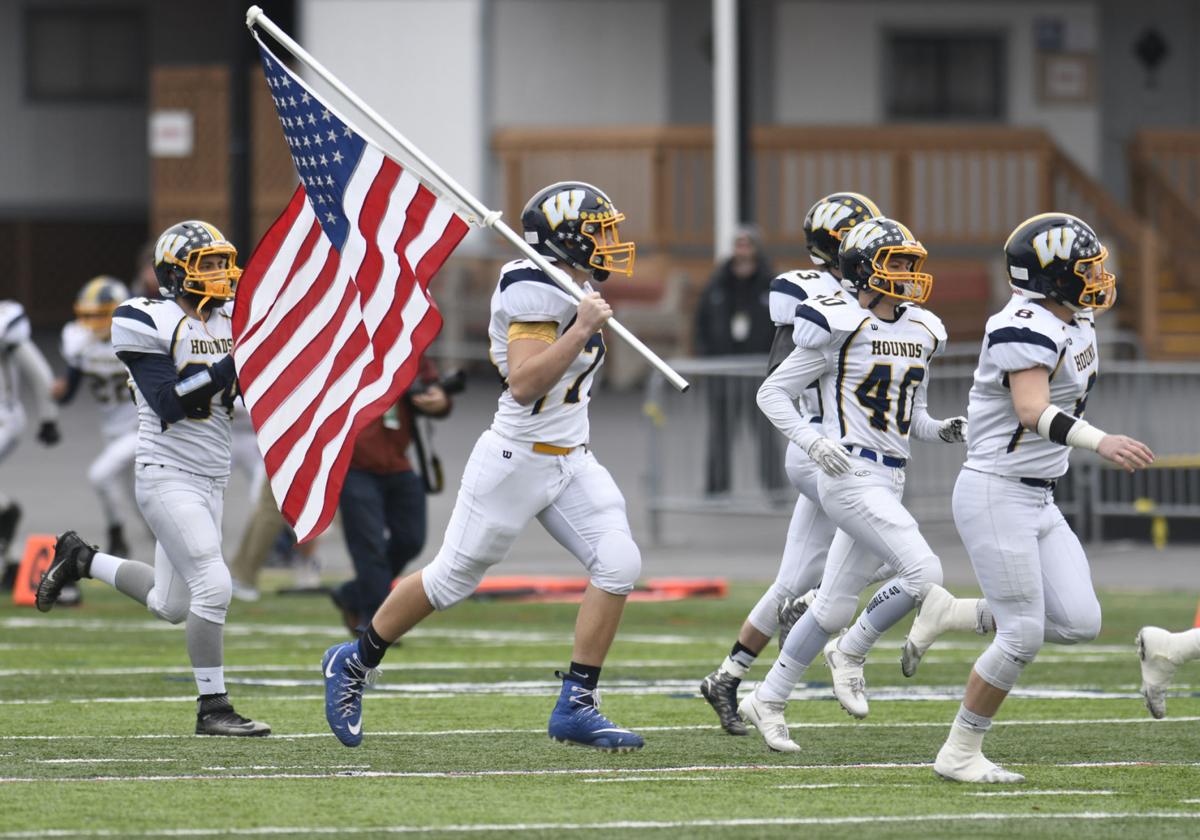 Wilmington's Mason Reed carries the flag onto the field before the start of a state title game against Southern Columbia. 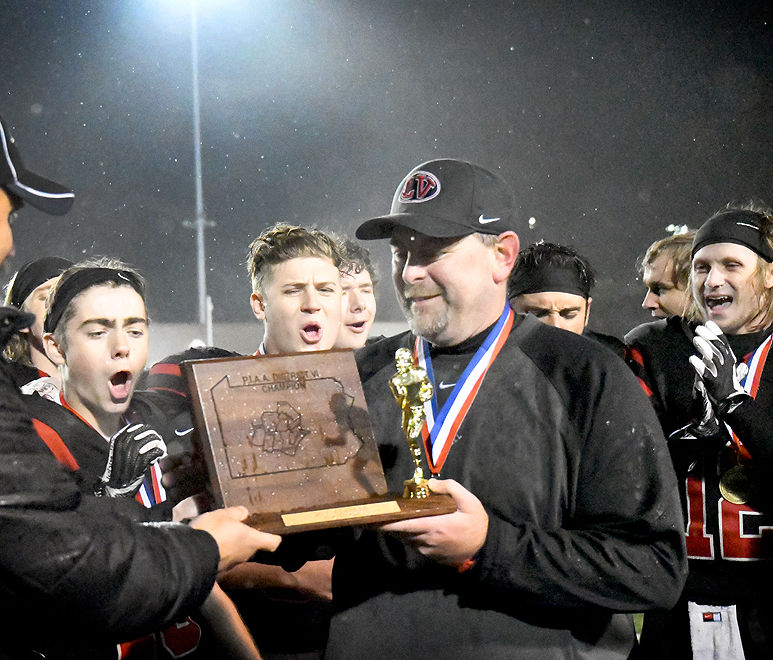 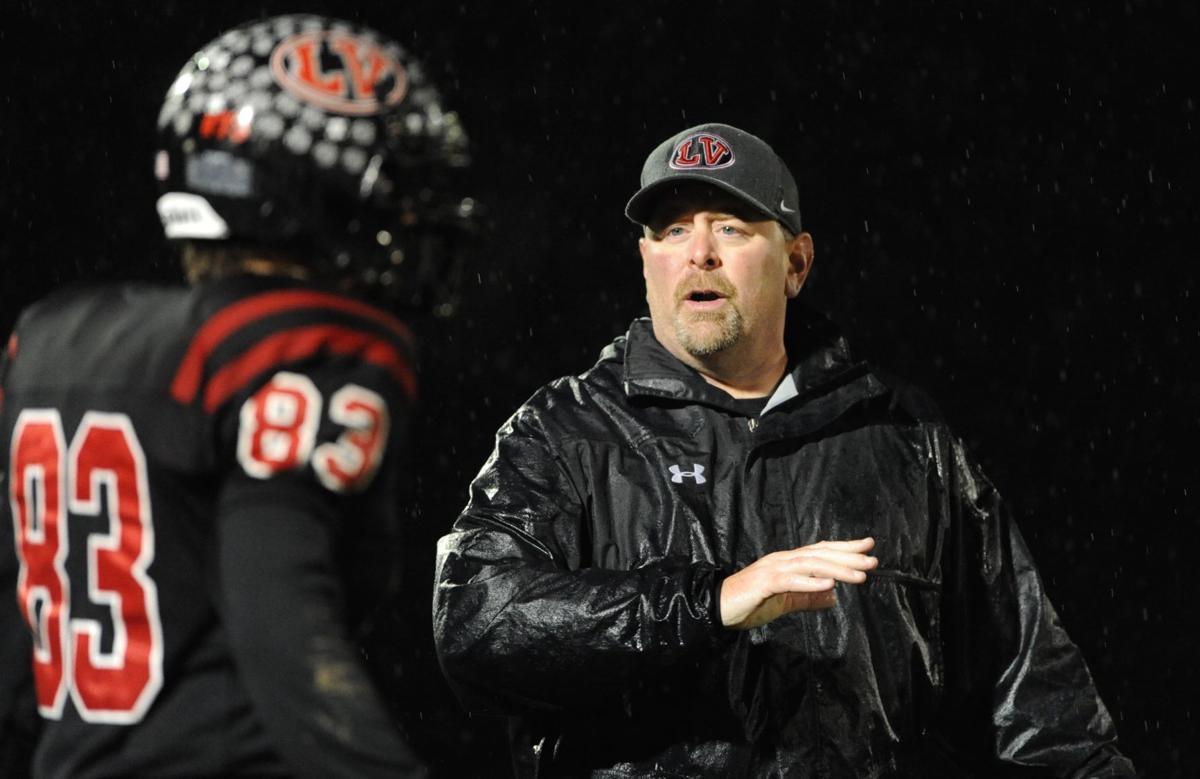 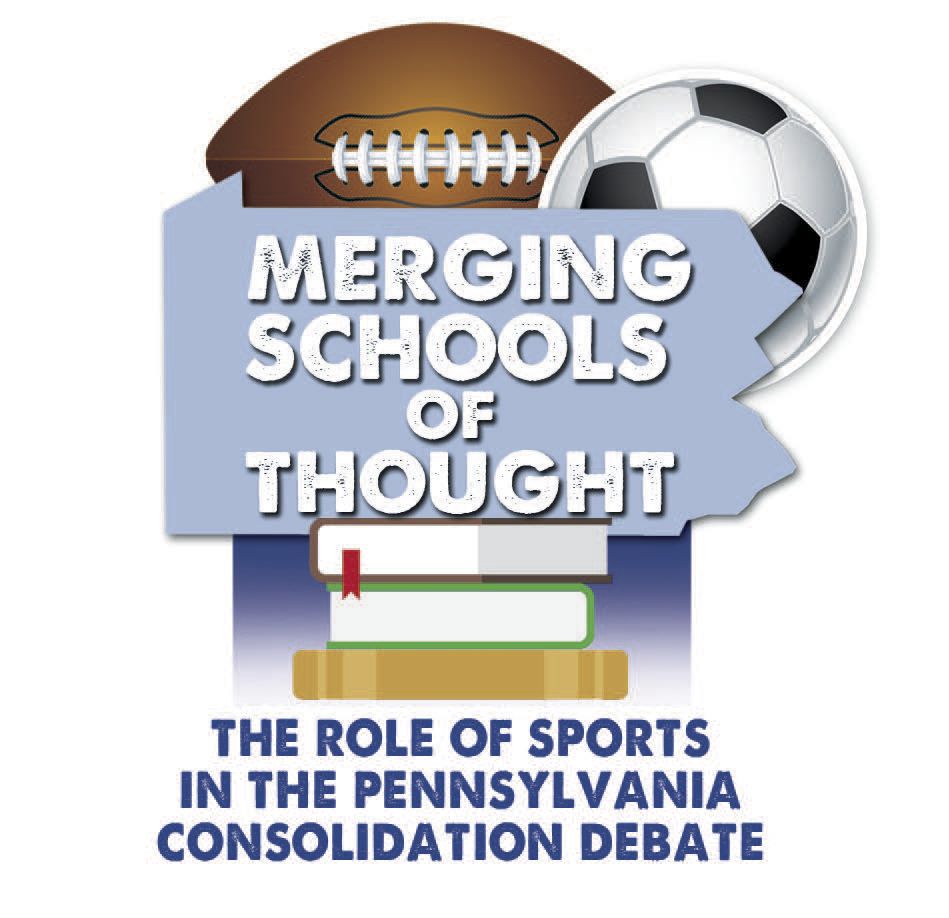 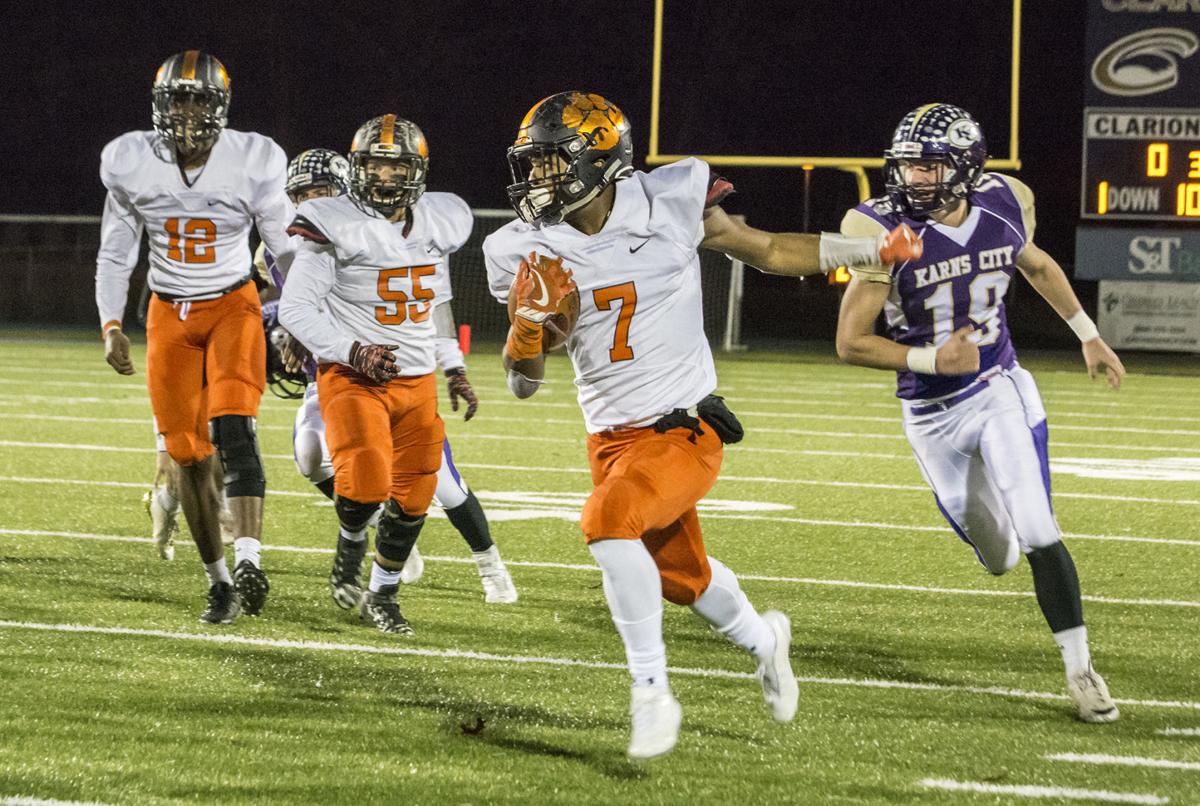 Sharon's Ziyon Strickland runs down the sidelines headed for the end zone.

Wilmington's Mason Reed carries the flag onto the field before the start of a state title game against Southern Columbia.

Sharon's Ziyon Strickland runs down the sidelines headed for the end zone.

Football coach Roger Beitel was an important figure in the successful merger of Ligonier Valley and Laurel Valley high schools in 2009.

The Laurel Valley school in New Florence was closed, with students riding buses to Ligonier. But the new district's sports teams became the Rams – taking the former Laurel Valley mascot with Ligonier's "Mountaineers" fading into history.

The specter of a shrinking population, belt-tightening budgets and ever-increasing expenses has forced some school districts to explore consolidation, or at least co-operative programs.

Right along with costs, taxes and educational opportunities, sports can be a key factor – or a major hurdle – in the move to mergers or shared programs.

It took more than a nickname to sooth hard feelings and turn former rivals from Ligonier Valley and Laurel Valley into classmates and teammates – even though they had shared one administration before the high schools were combined.

“Each day, try to win over one player and one family," Beitel said of how he handled the consolidation. "At the end of the week, you have a handful of believers."

Nearly a decade later, Beitel has a powerhouse program that has won back-to-back District 6 titles. The new Rams made it all the way to the state semifinals in 2016.

Beitel likes to tell the story of the players gathering for a team photograph before their first combined football season.

Team captain Brian Saxton noticed that the photographer wanted to get a group picture of the former Laurel Valley players, and then a shot of the former Mountaineers.

"Brian Saxton said, 'There are no Laurel Valley kids now. We’re all Ligonier Valley Rams now,' " Beitel said, adding that a parent commented after, "I just learned a valuable lesson from one of the kids.”

Former state Sen. John Wozniak, a Cambria County Democrat, was a proponent of school mergers when he was in the General Assembly, often offering his trademark comment:

School mascots do loom large in many districts.

In a sports hotbed such as Mercer County, consolidation is a four-letter word.

But for some districts with declining enrollments, co-operative agreements – which allows students from one school to play sports not offered by their school at another school – are an acceptable alternative.

"We have a pretty rich history with co-ops with Commodore Perry, Jamestown and Reynolds school districts as well as Living World Christian School," said Greenville Area School District Superintendent Brian Tokar, who moved into the position this year.

"In many cases there are reciprocal agreements, which is a financial benefit. For Greenville to start up and fund every sport is just cost-prohibitive."

Declining participation has forced some sports programs to get creative – even consider the dreaded notion of consolidation.

Ferndale High School in Johnstown cancelled multiple games during the 2013 football season because of low numbers coupled with a spate of injuries. Ferndale's Sept. 30 game against Shade was halted at halftime because the Yellow Jackets didn't have enough players to continue. Shade was awarded a 26-0 victory.

“We had to explain to them at halftime of that Shade game, ‘Hey, we only have 11 guys. You can’t play anymore. It’s not safe.’ There is never any quit in our athletes," Ferndale Athletic Director Steve Clawson said.

There was talk that year of ending the program. But in 2016 and 2017, the Yellow Jackets had two of the most successful teams in their history. Ferndale had 33 players in 2017, and Clawson numbers are similar for the upcoming season.

“Most small schools, it goes in cycles," Clawson said. "You don’t have the bodies and you struggle."

The Union Area School District has the smallest enrollment in Lawrence County and is one of the WPIAL’s smallest public school enrollments. Despite its diminutive size, Union has been able to maintain – and excel in – its athletic programs.

Still, though, Union faces a challenge when it comes to football. The Scotties will be lucky to reach the 20-player mark for 2018.

Berlin is in the fourth year of a co-op with Rockwood, a school that made statewide news when it dropped football in 2013. Paul’s team has emerged as a regional power, and he says with a decline in enrollment coming over the next few years, Berlin needs Rockwood’s participants to maintain the standard.

“The game is about numbers now. You need kids to play," he said.

At Ferndale, co-operative agreements have worked. The school does not offer track or wrestling, but it has a co-op with Westmont Hilltop in wrestling and with Greater Johnstown for track.

“I think the co-ops go great," Clawson said. "Westmont and Johnstown, in my estimation, treat our kids as well as they do their own. I think those co-ops are working out well for us, our students and our athletes.”

From rivals to friends

One of the fiercest field hockey rivalries in central Pennsylvania pits a pair of Perry County schools – Greenwood and Newport.

The two teams met last November in the Class A state semifinals on a Tuesday. Just three days later, players on both teams and many of the same fans were all cheering for Newport in a state football playoff game.

That's because Newport and Greenwood have a co-operative agreement for football.

"To other people it's probably weird. To us it's normal," Greenwood field hockey player Paityn Wirth said.

"Greenwood people walk into the student section and sometimes you can feel the tension," Greenwood field hockey player Abby Weger added. "It's a little weird, but you learn to live with it."

Friendships have get pushed aside in sports for the two schools located 6 miles apart.

"In field hockey, we're going at it, but we're a team during track season," Weger said.

"You always try to strive to be better than they are," Newport senior football player Beno Nunez said. "Then the next day, you talk about how you beat them or about how they beat you. It's just fun."

"Championships always bring good things," Conneaut Athletic Director John Acklin said. "They bring a lot of camaraderie among the kids, among the parents – they get on board."

That title was just three years after the merger of Linesville, Conneaut Lake and Conneaut Valley high schools. Acklin said winning provided the school with an exciting rallying point.

For Union High, success hasn't led to interest in students participating in football. The Scotties have three WPIAL Class A playoff trips and two quarterfinal appearances in six seasons.

“People think winning solves it all, but we’ve been pretty good over the past five or six years, making the playoffs and being competitive,” Robinson said. “This year, more than ever, we’re struggling to field a team.”

When Ligonier Valley made title runs in District 6 Class AA football, Beitel noticed a difference in the community.

“There was a parade every time we were on the road going to a playoff game," he said. "The first away game for us was the District 6 title game against Bishop McCort. As far as I could see, all I could see was flashing lights from Stahlstown to Seward. All I saw were vehicles. The next thing you know, there was a tear running down my cheek. This is absolutely amazing.”

He said he received notes from those who disagreed with consolidation. The team's success changed many opinions.

"It wasn’t anything against me, the coaches or the kids. It was against the process," Beitel said. "They sent thank you notes and said this team was special and they helped bring about unity in the valley."

The (Sharon) Herald, New Castle News, The (Johnstown) Tribune-Democrat, The Meadville Tribune and (Sunbury) Daily Item contributed to this report.