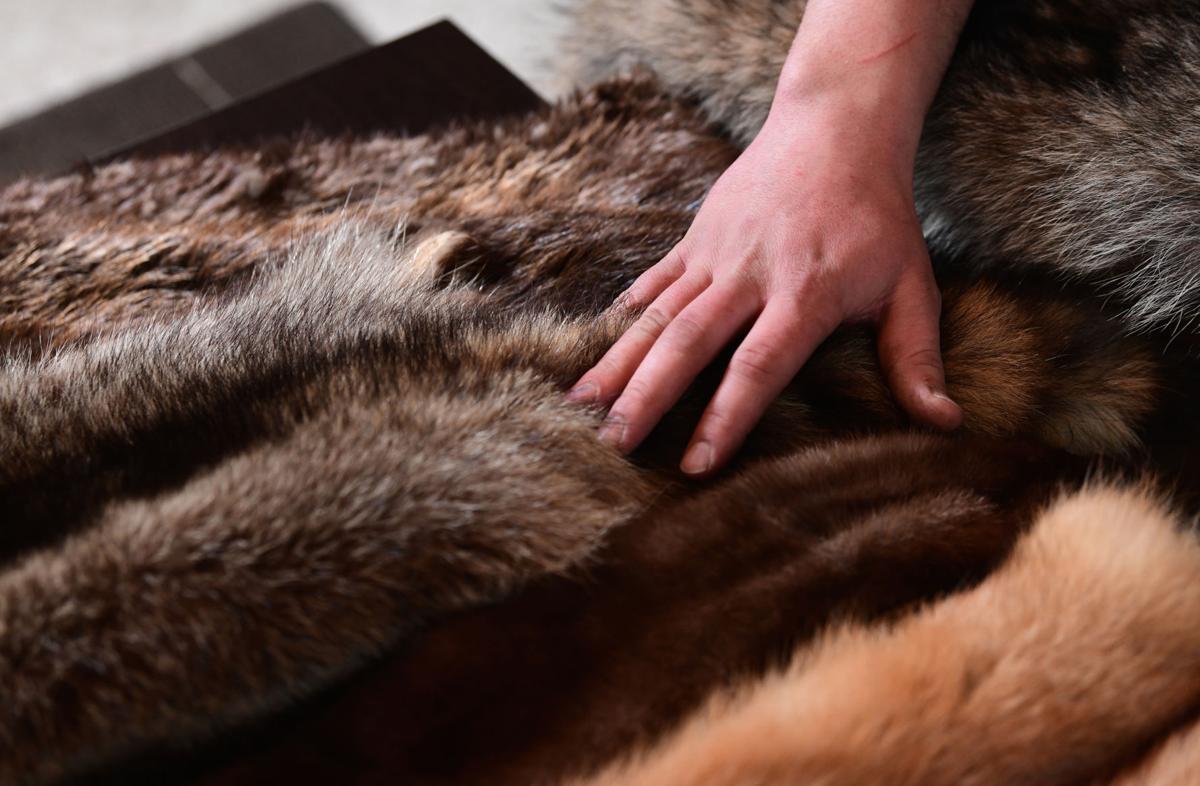 Trapper Logan Lichvar, 24, of Kantner, Somerset County, shows hides he has collected, during a Jan. 16, 2020 interview at his home. His hides include raccoon, mink, red fox and beaver. 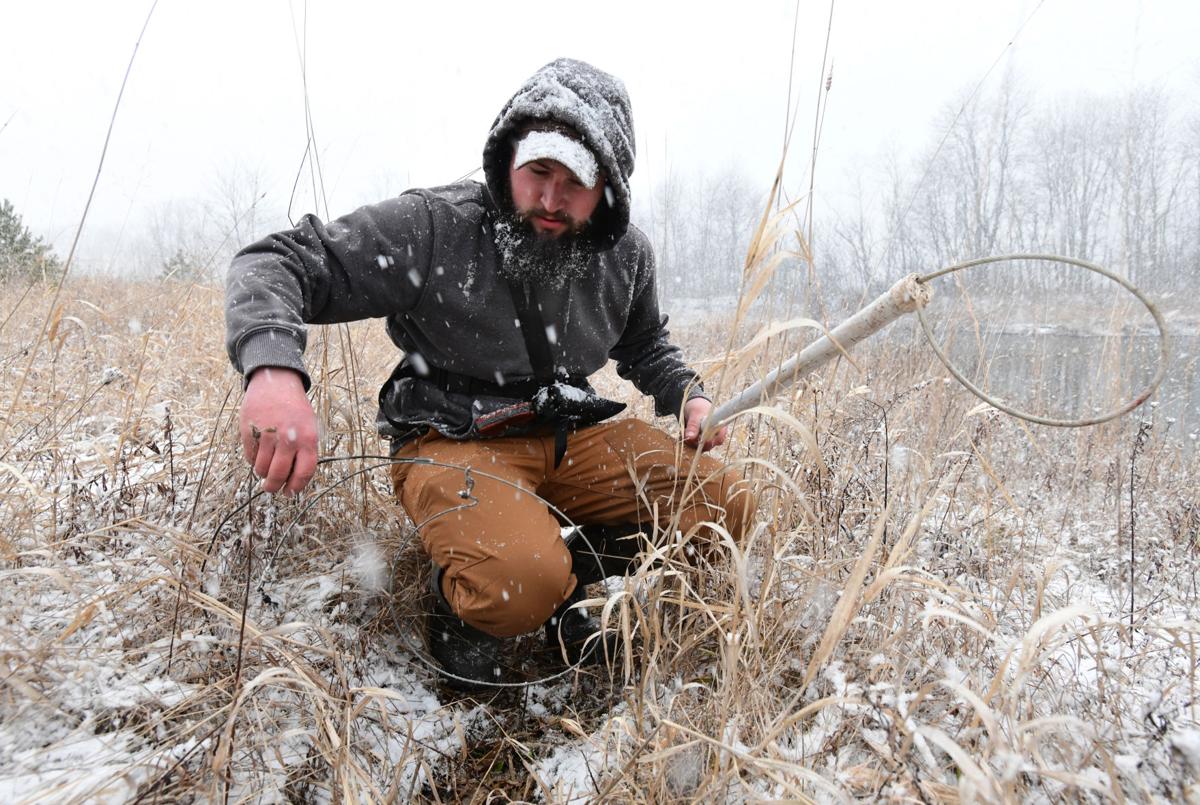 Trapper Logan Lichvar, 24, of Kantner, Somerset County, checks a cable restraint for fox and coyotes near his home on Jan. 16, 2020. 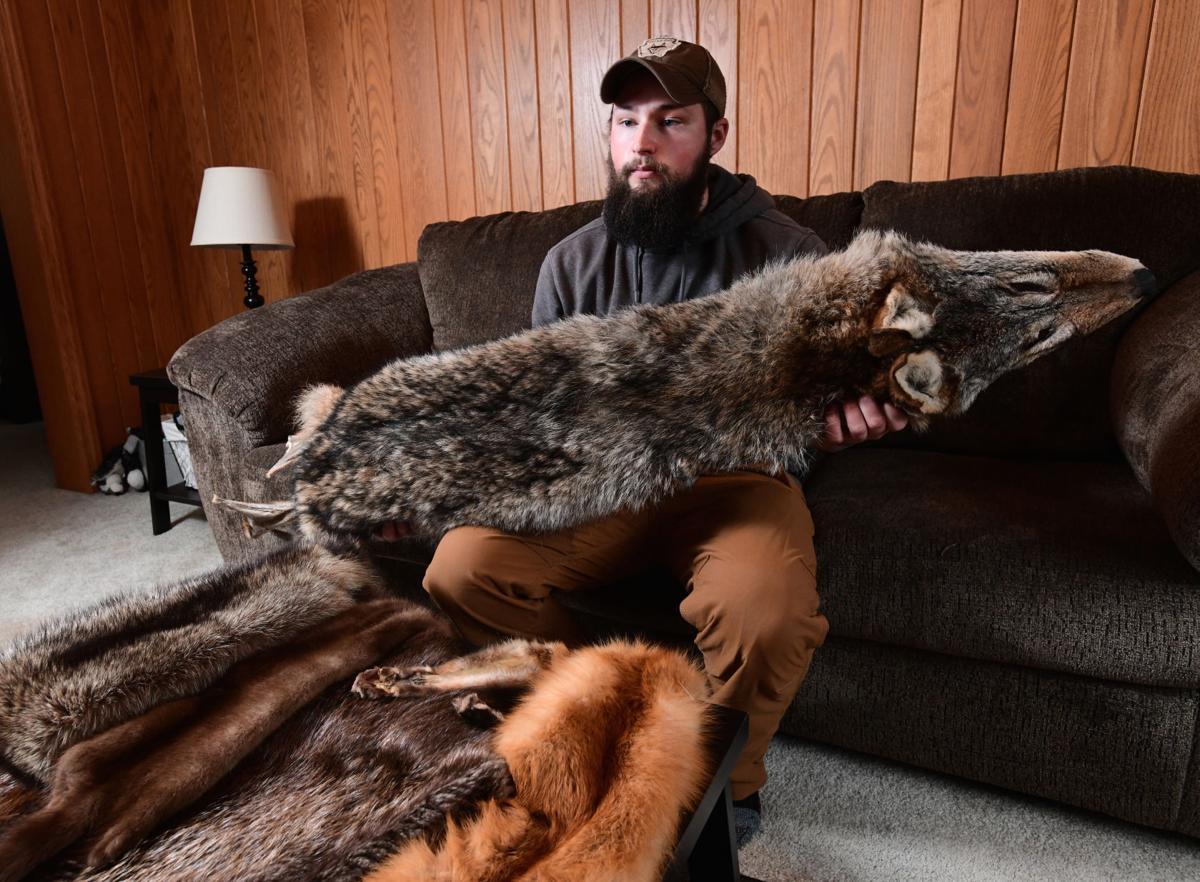 Trapper Logan Lichvar, 24, of Kantner, Somerset County, shows off an eastern coyote hide at his home on Jan. 16, 2020.

Trapper Logan Lichvar, 24, of Kantner, Somerset County, shows hides he has collected, during a Jan. 16, 2020 interview at his home. His hides include raccoon, mink, red fox and beaver.

Trapper Logan Lichvar, 24, of Kantner, Somerset County, checks a cable restraint for fox and coyotes near his home on Jan. 16, 2020.

Trapper Logan Lichvar, 24, of Kantner, Somerset County, shows off an eastern coyote hide at his home on Jan. 16, 2020.

KANTNER – As an afternoon snowsquall kicked up one January afternoon, Logan Lichvar – with a catch pole in his hand and a .22 pistol in a holster – walked across a field a few miles away from his Somerset County home, hoping to find a red fox or coyote caught in one of the traps he had set.

No animals were caught.

But checking on the traps, as he does every day during the season, gave Lichvar an opportunity to spend some time in the woods – which he has enjoyed doing since childhood.

“There's a lot of stuff I like to do outdoors, but trapping is definitely really high on the list,” Lichvar said. “You spend a lot of time out in the woods, scouting, looking for sign. You really have to know what you're looking for. You have to get one of these animals into such a small location to catch them. It's not like a deer, where you can rifle hunt and shoot a deer at 150, 200 yards.”

He added: “It's different than hunting or fishing in a lot of ways. What appeals to me is that not many people do it any more. It's pretty hard. So, whenever you do succeed at it, you get a really good feeling from it.”

Lichvar, 24, who took up the sport less than a decade ago when still in high school, feels a connection to the rich history of trapping, which helped shape North America's identity in the early days of colonization and beyond.

“Furtaking has been around since people sailed to this country on a boat,” Lichvar said. “It's what helped drive westward expansion. The first guys to go out west were trappers.

"It's a really longstanding tradition that's just kind of fallen out of style for whatever reason.”

Back at his home, Lichvar has coyote, red fox, mink, beaver and raccoon pelts to show visitors.

He sells some furs, but predominantly traps because he enjoys the activity.

“The fur market is not what it once was,” Lichvar said. “I got into it like right after the last mini-fur boom where fur was still selling relatively decent. I've never gotten what anybody would consider great prices.

"But I don't do it for the money. I do it more for the sport of it and managing populations and stuff like that.”

Along with providing recreation and income, trapping also plays a role in crop protection.

“At least in our area, we still have a fair amount of farms,” said Bill Smith, assistant director of Pennsylvania Trappers Association District 5. “I think when a lot of kids grow up – when you're on the farm – you see how all these animals affect farming.

"A lot of times, you may get into trapping just because of necessity if raccoons are getting into your corn bin or whatever on the farm. I think, as far as our area, a lot of interest comes from the farming community.”

The Pennsylvania Trappers Association holds a class every year during which participants can learn techniques and rules, including the dates of seasons, which, for several popular animals are about to end – bobcats (Feb. 5), foxes (Feb. 22) and raccoons (Feb. 22).

“We're just trying to educate people,” Smith said. “There are very strict regulations on trapping, seasons and methods. The tools that we use are all strictly regulated.

"That's what we do in our school also. We make sure that not only the young people – but anybody who comes through our school – have the proper training as how to trap ethically and also legally. We really go over the legal stuff.”

District 5 also hosts an annual fur auction, which, this year is scheduled to take place on Feb. 9 at the Bedford County Fairgrounds, beginning at 9 a.m.

“It's kind of a self-pride thing to be able to show the best furs you've got,” District 5 Director Dale Yoder said. “We've even asked buyers if there's anything we could do different and they usually tell us 'no' because they like the way we put our stuff up.

"I know when we've had different people come in at the fur sale and they're just amazed at the amount of fur that was there.”

PTA, founded in 1936, is the nation's oldest and largest trappers association.