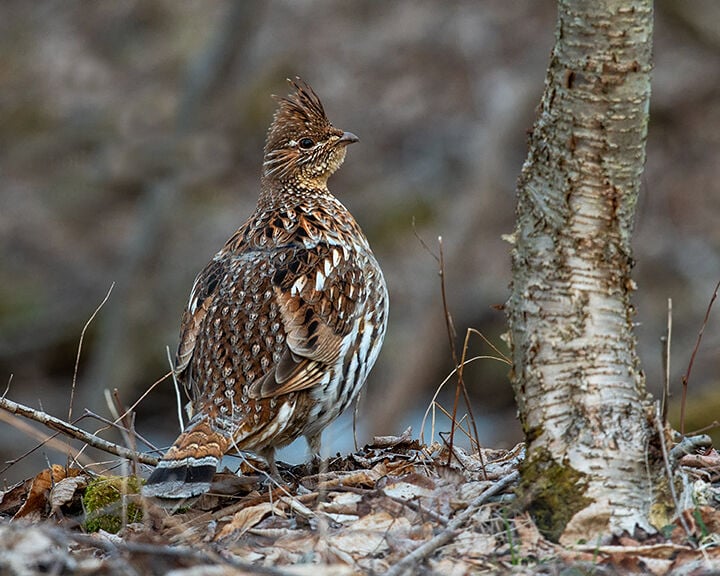 A ruffed grouse walks near a birch tree in Pennsylvania. Photo by Timothy Flanigan/Nature Exposure 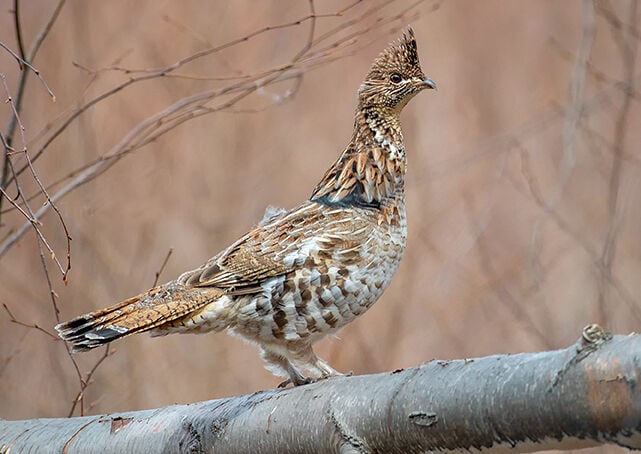 A ruffed grouse is shown perched on a birch log for a better view in a Pennsylvania thicket. Photo by Timothy Flanigan/Nature Exposure 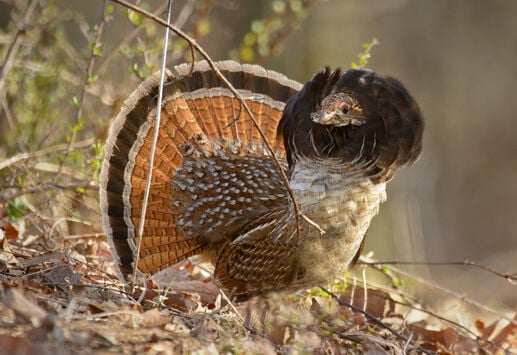 A male ruffed grouse is shown in a courtship display in a Pennsylvania thicket. Photo by Timothy Flanigan/Nature Exposure 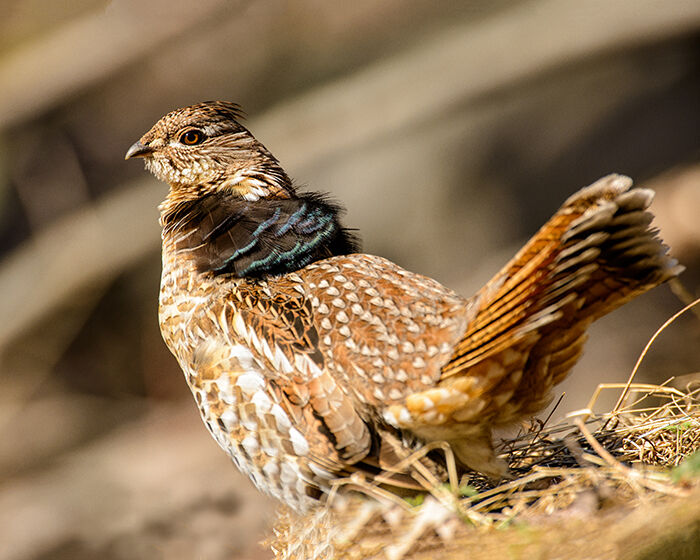 A ruffed grouse is shown in a Pennsylvania thicket. Photo by Timothy Flanigan/Nature Exposure

A ruffed grouse walks near a birch tree in Pennsylvania. Photo by Timothy Flanigan/Nature Exposure

A ruffed grouse is shown perched on a birch log for a better view in a Pennsylvania thicket. Photo by Timothy Flanigan/Nature Exposure

A male ruffed grouse is shown in a courtship display in a Pennsylvania thicket. Photo by Timothy Flanigan/Nature Exposure

A ruffed grouse is shown in a Pennsylvania thicket. Photo by Timothy Flanigan/Nature Exposure

Pennsylvania’s state bird is in serious trouble. The ruffed grouse, known for its signature wing drumming in the spring woods, and speedy, explosive flushes when startled, has been vanishing from the landscape.

After reaching a population apex in the mid 1990s, the non-migratory bird that has little problem surviving the harshest of winters has fallen victim to the repercussions of human interaction.

For the past five years, Pennsylvania Game Commission Grouse Biologist Lisa Williams has been intensively studying grouse population decline, and is working to stop the trend.

A newer threat – “The one that kills you quickly, ” Williams said. – is West Nile Virus. Traced to accidental importation of foreign mosquitoes hitching rides on cargo ships from Africa, western Asia, and the Middle East, to New York City in 1999, the virus has spread across the North American continent. Birds and mammals bitten by the foreign mosquito were subsequently bitten by native mosquitoes, which then spread the virus.

Grouse populations that have been clinging on in areas of bad habitat – the southern two-thirds of Pennsylvania, Williams said – are taking the brunt of the virus. In the northern tier counties where habitat is better, she said, "they can almost keep up with the disease; they can get ahead of it.”

Following a hunch that the virus was affecting grouse, Williams conducted a study in 2015 with Colorado State University.

“We found that 40% of the grouse chicks that we gave the virus to died very quickly,” she said. “The chicks died within two weeks. The other 60% of the sample looked OK.”

But she said that after two weeks, they developed heart and brain damage so badly that they would not have survived in the wild. “That was sort of an ‘Oh brother!’ moment.”

Healthy grouse can live as long as 10-11 years in captivity, but a West Nile infection drops that expectancy to just two.

Another factor is the decline in bat populations, as bats eat lots of mosquitoes. After 20 years of bat population gains, and advances in research, White Nose Syndrome suddenly swept through the U.S. starting around 2008, severely curtailing the bat population.

Williams said Pennsylvania has reached a 75-year low for necessary grouse habitat – that is, a young, healthy-growing, thick forest of downed logs, brambles and scattered saplings. “The stuff that you would have to fight your way through,” she said, “they need that around to protect them from predators.”

Humans "like a forest that looks kind of like a park," she said. "Wildlife really want a mess. It’s what’s best for them.”

The state was largely clear-cut through the late 1800s, with forests regrowing during the 20th century. Today, much of Pennsylvania's forest area is 90 to 120 years old. Only 7% is made up of young forest that grouse need for courting, nesting and brood-rearing. “We really need twice that for grouse to really thrive,” Williams said.

Williams enlisted the help of 800 hunters who provide her with blood samples of birds they harvest. The blood can yield antibodies and show infection percentages.

Since mosquito populations rise and fall largely due to temperature and rainfall, Williams has found that weather is a primary factor in the spread of West Nile. Above-average spring and fall temperatures prolong the mosquito-breeding season, and eight of the past 10 years have been that way. Williams said that “2017 and 2018 were horrible years for disease; 2018 was the worst year that we had ever seen, just because of the weather.”

So Williams developed a hypothesis: “Can we lessen risk by putting grouse habitat away from these mosquitoes?”

The tool is showing where mosquitoes are most, and least common – and providing a map that PGC land managers and foresters can use to promote grouse habitat where the birds have the best chance to survive.

Since lower elevations are mosquito-friendly, habitat projects along ridge tops are the target.

“It looks like if you can get above 1,600 feet, or 1,900 feet in elevation, you really see those mosquitoes kind of drop off at that point,” Williams said, adding that since stagnant water is a haven for mosquito incubation, eliminating that factor is important in addressing West Nile.

More hope came from the past two summers, which have been mild and dry – and Williams said her statewide grouse numbers have actually increased by 10% since 2018.

In 2017, the PGC took an emergency measure by shortening grouse season for the first time since 1960, indefinitely postponing after-Christmas hunting. “I promised grouse hunters, when we did that, that I would develop a system that would change the season based on how the birds were doing,” Williams said.

The late season can have a large effect on the birds, as they’ve already survived being chicks, possibly dodged the virus, and eluded fall hunters. “They’ve made it through everything else," she said. "We want them in the breeding population.”

Hunters are still permitted to take two grouse per day from Oct. 17 to Nov. 27, and from Dec. 14 to Dec. 24. Williams decided not to drop the bag limit, as only 3% of the hunters she uses with her study ever get two grouse in one day.