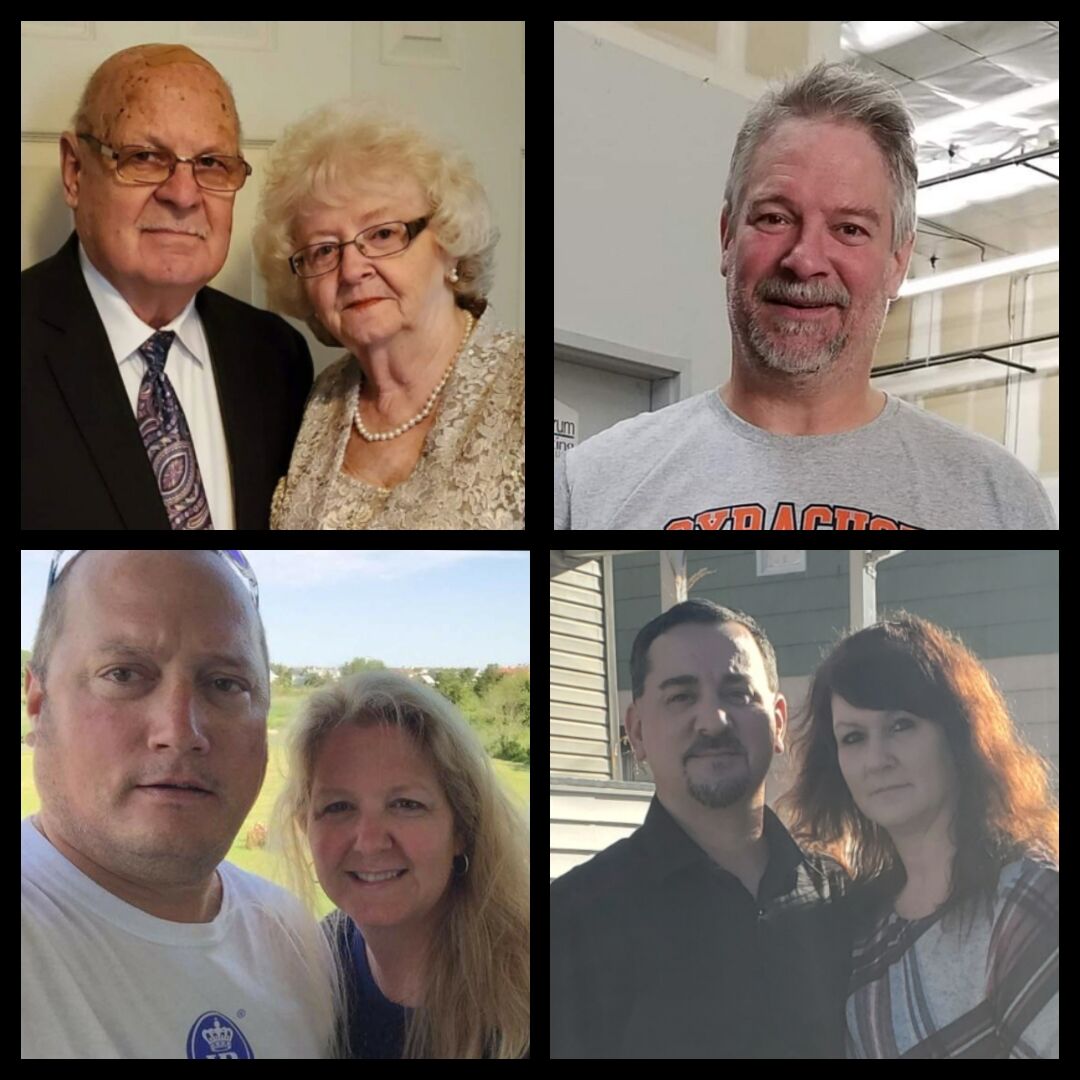 These images show Robert and JoAnn Schuster, top left, and their children and children's spouses.

Robert Schuster stands by a painted fire hydrant outside the family home in Johnstown's West End.

These images show Robert and JoAnn Schuster, top left, and their children and children's spouses.

Robert Schuster stands by a painted fire hydrant outside the family home in Johnstown's West End.

Schuster was relatively healthy for an 82-year-old. He and his wife, JoAnn Schuster, remained active in the community and in Third Brethren Church, 184 Spring St.

She came home from work at noon on Dec. 5 and learned that Robert was feeling ill. He had a cough and soon couldn’t keep his food down. When he tried to sit on the edge of the bed, he fell to the floor and did not have the strength to get up.

That's when JoAnn knew it was time to get him to the hospital.

“He was so weak,” JoAnn said. “He couldn’t understand how he could be so weak so fast.”

Because of pandemic protocols, JoAnn had to leave her husband alone in the emergency department at Conemaugh Memorial Medical Center. The next day, she learned he had tested positive for the novel coronavirus.

Robert communicated with family by phone for several days but gradually became too weak to talk. Nurses kept the family up to date as he was placed on a breathing machine and then transferred to the intensive care unit, the couple’s daughter, Vicki Burkey said.

On Dec. 18, Robert Schuster was one of 218 Pennsylvanians who died that day from complications of COVID-19.

The last few days were devastating, JoAnn said. She had gone through a similar experience when her father died – but this was far worse.

“It seems so sudden,” JoAnn said. “I couldn’t hold his hand and tell him I loved him. If you’re sitting holding his hand, like with my dad, it’s different.”

During Robert's final days in the hospital, the couple were thinking of two earlier frightening separations.

JoAnn Schuster understood the risks her husband faced every day when she kissed him good-bye and he went to work July 19, 1977, but it was just another day in the life of a firefighter’s wife.

Then the rivers began to rise and soon the 1977 Johnstown Flood swept through the valley.

“I didn’t see him for two days,” JoAnn recalled.

Robert was involved with rescues in downtown Johnstown and nearby neighborhoods with no way to communicate with his family at their Sheridan Street home in the West End. He finally managed to get across the swollen rivers and found a ride up through Westmont to St. Clair Road.

“He ran down St. Clair Road to Sheridan Street,” JoAnn Schuster said. “Then we knew he was OK. Then he knew we were OK.

“He got cleaned up, changed his clothes and went back to work because they were on 24/7.”

“It was that dreaded call,” she said. “They said, ‘You have to come to the hospital.’ They wouldn’t tell me anything.”

She learned her husband and firefighter Robert Svonavec had been briefly trapped when a ceiling came down while they were dousing flames inside the former Morton’s Shoe Store at 109 Main St.

“He said, ‘There was a wall of fire all around me,’ ” JoAnn said. Robert told her he managed to grab a hose and the two escaped the blaze.

“He said, ‘(Robert’s) experience and knowledge kept me from being burnt up,’ ” she said.

Despite the near-tragedy and daily risks, Robert loved his job, JoAnn said.

“Fighting fires was his passion,” she said.

Robert worked for a car dealership for several years after the couple married in June 1960 but he always wanted to be a firefighter. He joined the Johnstown department in 1969 and retired in 1997.

Even in retirement, there was always a scanner on in the Schuster home. Robert would regularly go out and pitch in sweeping up or providing moral support at accidents and fires. He liked to spend time on the porch, where he could talk with firefighters or police who stopped by.

The pandemic limited attendance at Robert's funeral service, but the emergency services community came together for a massive processional with fire vehicles and the traditional arch of ladders entering Grandview Cemetery on Dec. 23.

“It was the one thing that overwhelmed us,” Kovach said. “We loved him, but when he passed, there was an unbelievable outpouring of love. There were so many cars. People lined the streets for the procession.”

JoAnn and Robert had been watching COVID-19 news for months but had no friends or family affected by the pandemic. They weren’t ignoring it, however, Burkey said.

“We didn’t all get together for Thanksgiving,” she said. “In church, he kept his mask on. We tried to be cautious. There was always hand-sanitizer in the car.”

After Robert’s positive test, JoAnn and both of their daughters and sons-in-law have tested positive, although none became seriously ill.

The family urged those in the region to understand that the virus can be devastating and is hitting home.