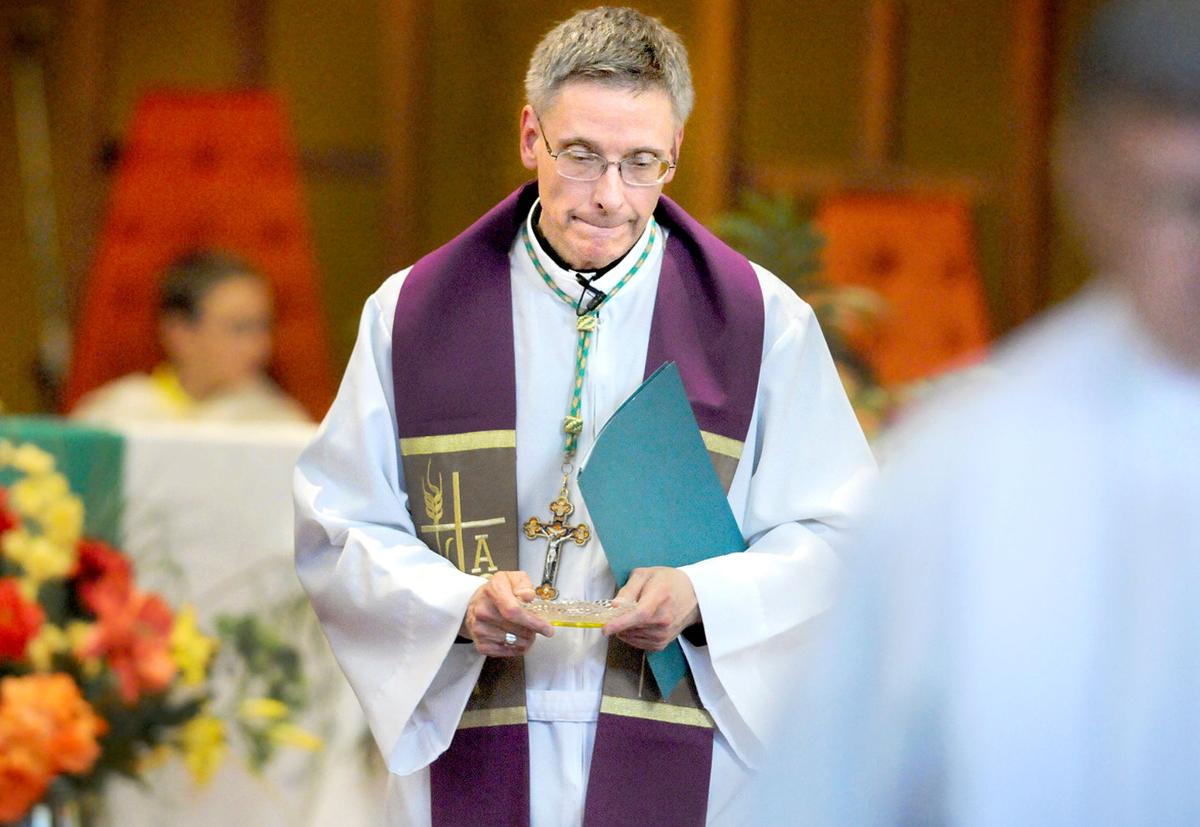 Bishop Mark Bartchak of The Diocese of Altoona-Johnstown leaves the podium after his homily and calls for 20 minutes of silent reflection during "Prayer for Victims and Survivors of Sexual Abuse" service held at St. Andrew Church in Johnstown on Monday, May 16, 2016. 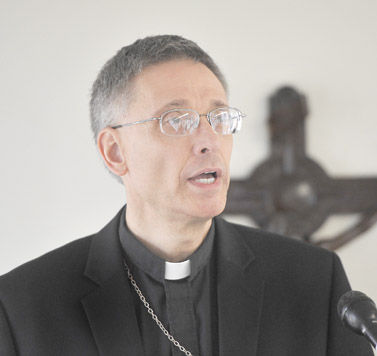 Rev. Mark L. Bartchak, Bishop of the Diocese of Altoona-Johnston, Pennsylvania, spoke last year, on March 3, 2016, about the widespread report of sexual abuse by priests across the diocese.

Bishop Mark Bartchak of The Diocese of Altoona-Johnstown leaves the podium after his homily and calls for 20 minutes of silent reflection during "Prayer for Victims and Survivors of Sexual Abuse" service held at St. Andrew Church in Johnstown on Monday, May 16, 2016.

Rev. Mark L. Bartchak, Bishop of the Diocese of Altoona-Johnston, Pennsylvania, spoke last year, on March 3, 2016, about the widespread report of sexual abuse by priests across the diocese.

HARRISBURG – Current Roman Catholic Diocese of Altoona-Johnstown Bishop Mark Bartchak is mentioned in the grand jury report into clergy sexual abuse across Pennsylvania, released on Tuesday, in connection to the Rev. William Presley, a former priest in the Erie Diocese.

Presley was accused of abusing children from at least 1963 until 1986.

Then-Monsignor Bartchak led an investigation, in 2005, which included re-interviewing a male victim who previously disclosed his alleged abuse to the diocese in 1982, 1987 and 2002. The individual claimed Presley taught him how to have sexual intercourse by showing index cards to him and a female high school student that explained how they should touch each other. He accused Presley of – on more than one occasion – giving him some type of sedative before committing abuse.

On Aug. 25, 2005, the grand jury report says, Bartchak sent a confidential memo to then-Erie Bishop Donald Walter Trautman, which, in part, read: “I was not surprised to learn from other witnesses from the Elk County area, that there are likely to be other victims” and explained that “it is likely that there may be others who were also of the age for the offenses to be considered delicts, but to what end is it necessary to follow every lead?”

He then asked Trautman: “Is it worth the further harm and scandal that might occur if this is all brought up again? I am asking you how you want me to proceed. With due regard for the potential for more harm to individuals and for more scandal, should I continue to follow up on potential leads?”

Four days later, according to the report, Bartchak documented a meeting with Trautman.

“Bishop Trautman decided that in order to preclude further scandal, these additional witnesses should not be contacted, especially given the fact that it is not likely that they will lead to information concerning delicts involving minors under 16 years of age,” Bartchak wrote.

When asked for a comment on Tuesday, Tony DeGol, the Diocese of Altoona-Johnstown's secretary for communications, said the bishop was still reviewing the grand jury report.

"Delict" is a Latin term referring to civil offenses.

When asked for a comment on Tuesday, Tony DeGol, the Diocese of Altoona-Johnstown's secretary for communications, said the bishop was still reviewing the grand jury report.

'Cloaked in ... the priesthood'

The AG's office rebuked the Erie Diocese for how it handled the Presley case without specifically condemning Bartchak's actions.

“The truth was that (former Bishop Michael Joseph) Murphy, Trautman, and the Diocese of Erie intentionally waited out the statute of limitations and curbed their own investigation to prevent finding additional victims,” according to the report.

“The Grand Jury finds that the failure of the Diocese of Erie and of Murphy and Trautman to aggressively pursue the removal of Presley in a timely fashion had left Presley cloaked in the authority and respect of the priesthood. Moreover, the lack of transparency and candor with respect to the concerns surrounding Presley only aided seamless insertion into another Catholic community. Presley, a priest Trautman would eventually describe as a 'hardcore predator,' had escaped to a new region of Pennsylvania.”

In 1994, Adamec sent a confidential letter to all Pennsylvania bishops, providing details about what was then an ongoing case against the Rev. Francis Luddy, who was accused of abusing Michael Hutchison, while at St. Therese Roman Catholic Church in Altoona. Adamec mentioned “Secret Archives,” which were eventually brought to public light when the attorney general's office released a grand jury report in 2016, detailing abuse within the Altoona-Johnstown Diocese.

Adamec wrote: “It would appear to me, given the facts of this case and the procedures allowed the attorney for the plaintiff, that this is another effort to discredit the Church. We have been viewing our situation within the context of our faith journey and are putting forth every effort to approach the matter in a positive way.”

The case – Hutchison vs. Luddy – lasted two decades before the diocese finally completed its court-ordered payments to the victim.

Twenty members of Pennsylvania's 40th statewide investigative grand jury filed objections to the release of a redacted version of the report into the sexual abuse of thousands of children at the hands of hundreds of priests within six Roman Catholic dioceses across the state, The Tribune-Democrat has learned.