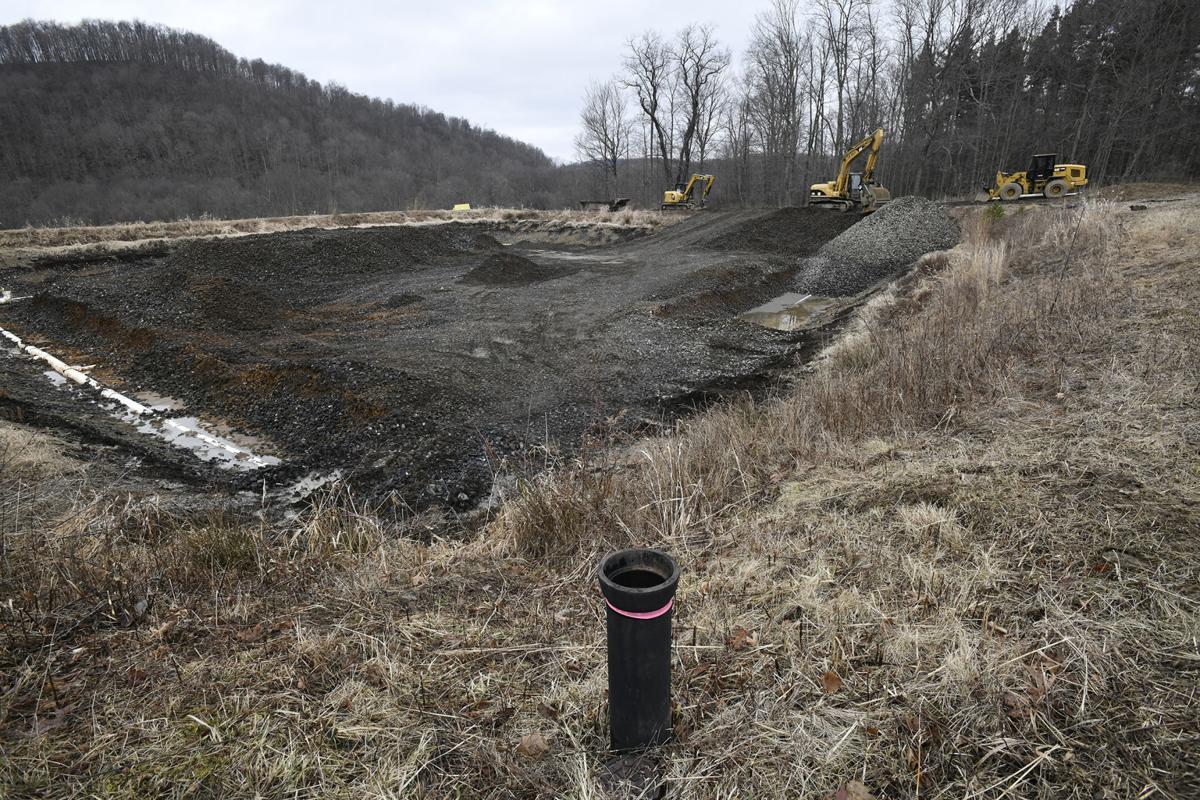 The Hawkview “F” site passive treatment site were work is taking place to repair it, in this Tuesday, Jan. 14, 2020, photo. 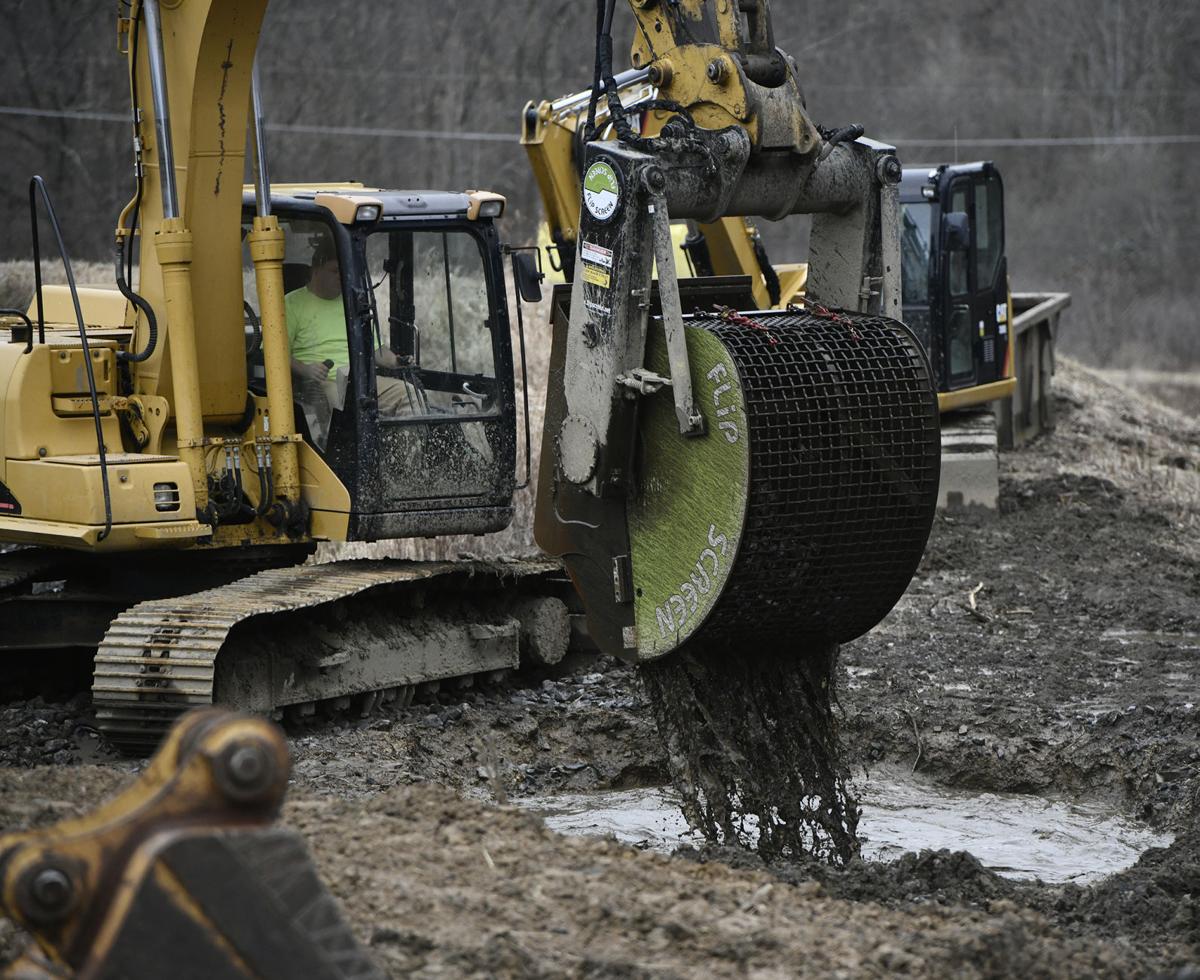 White Horse Excavating of Berlin washes the limestone rocks of the aluminum and iron in this Tuesday, Jan. 14, 2020, photo.

The Hawkview “F” site passive treatment site were work is taking place to repair it, in this Tuesday, Jan. 14, 2020, photo.

White Horse Excavating of Berlin washes the limestone rocks of the aluminum and iron in this Tuesday, Jan. 14, 2020, photo.

KANTNER – Heavy equipment and piles of limestone filled a Shade Township site Tuesday that has been counted on for well over 20 years to help keep the Stonycreek River healthy.

Work is underway to rehabilitate and upgrade the "Hawk View" acid mine drainage treatment site – among the largest of five relied on to remove acidic metals from a key Stonycreek River tributary.

To Phil Wilson, it's a critical milestone.

"Without this site, the river would be dead here. It would be orange," said Wilson, a Somerset-based engineer for the Pennsylvania Association of Conservation Districts, which handles engineering for county districts across the state.

"Seeing this project occur," he added. "It's spectacular."

For Somerset Conservation District Manager Len Lichvar, it's a must.

The Hawk View site is part of the Oven Run Treatment System.

Four of the sites are maintained by the Somerset Conservation District, while another is under the Department of Environmental Protection's watch, Lichvar said.

Together, the five locations are credited for bringing life back to the Stonycreek River, a once heavily polluted waterway that now attracts a steady stream of boaters, river tube floaters and anglers.

Over that span, the river flipped from net acidic to a life-sustaining alkaline level and earned River of the Year honors from the state.

But with the entire system more than 20 years old, the river's fortunes could reverse "overnight," he said.

And despite years of ongoing maintenance along the corridor, there are some areas where the pond and basin systems aren't holding up anymore, Lichvar said.

"Our last study, back in 2017, showed the river's quality wasn't continuing to improve anymore," he said, noting it made progress for decades prior to that.

Without the ongoing $272,000 repair job, the Hawk View site is now allowing water with an acidic pH of 3 to run into the Stonycreek, he added,

Hawk View is the second of the Conservation District's four sites to see upgrades.

"Site E" – upstream from Hawk View near the village of Wilbur – was upgraded as part of another project that wrapped up last summer.

The site relies on four treatment areas – a series of ponds and basins that the discharge flows through before continuing into the river, Wilson said.

The two ponds will be filled with 5,000 tons of limestone and then topped with 18 inches of compost, he said. And as designed, water would move slowly through the high-alkaline, low oxygen setting for 24 hour, flowing through settling basins designed to capture the harmful "heavy metals" that flow from the discharge sites.

Existing limestone is being washed and mixed with more of the calcium-rich mineral for the ponds, Wilson said

If all goes well, the site work will wrap in April.

Lichvar is already turning his attention to the Conservation's other two sites.

The Old Forbes Road section upstream from Hawk View has started to fail, too..

The Oaks Trail site – the first system the district built – is "catastrophically" failing.... barely functioning at all anymore, he said.

The Conservation District is working with the Foundation for Pa Watershed and state Department of Environmental Protection to secure funding for the work, adding he's "optimistic it'll come at some point."

"But until you have the signed contract in hand, you just don't know," Lichvar said.

A chance to 'make it better'

The DEP is currently in the early design phase of a plan to redesign Site B, which was originally built 20 years ago by the state's Bureau of Abandoned Mine Reclamation, DEP Spokeswoman Lauren Fraley said.

It was originally developed to treat 350 gallons per minute at thew site.

Fraley acknowledged the system never performed to its original intent – and that a "complete redesign" is being eyed to ensure that doesn't happen again.

"This would likely include modification of existing ponds ... as well as the addition of an automated flushing system to avoid the total system from becoming clogged," she said.

As-is, the system is also at the end of its lifespan and DEP officials are hopeful they'll have a final design complete before the end of the year, Fraley said.

Lichvar said the entire Stonycreek could benefit like never before through improvements to Hawk View and the DEP's "Site B."

If all goes as planned, that'll occur at Hawk View this spring, he said.

"People see the Stonycreek now and think just because there's activity there now, it's in good shape," Lichvar said. "But what a lot of people don't realize is that – even at these sites – there's a lot more iron to remove. And we can do that now."

"And when that happens, our quality of life, fisheries or the overall health of the Stonycreek watershed all benefit," he said.

As Somerset Conservation District’s manager, Len Lichvar’s career overseeing the Stonycreek River’s most vital pollution treatment system has evolved – from helping get it developed back in the 1990s to ensuring the system will continue to do its job years from now.