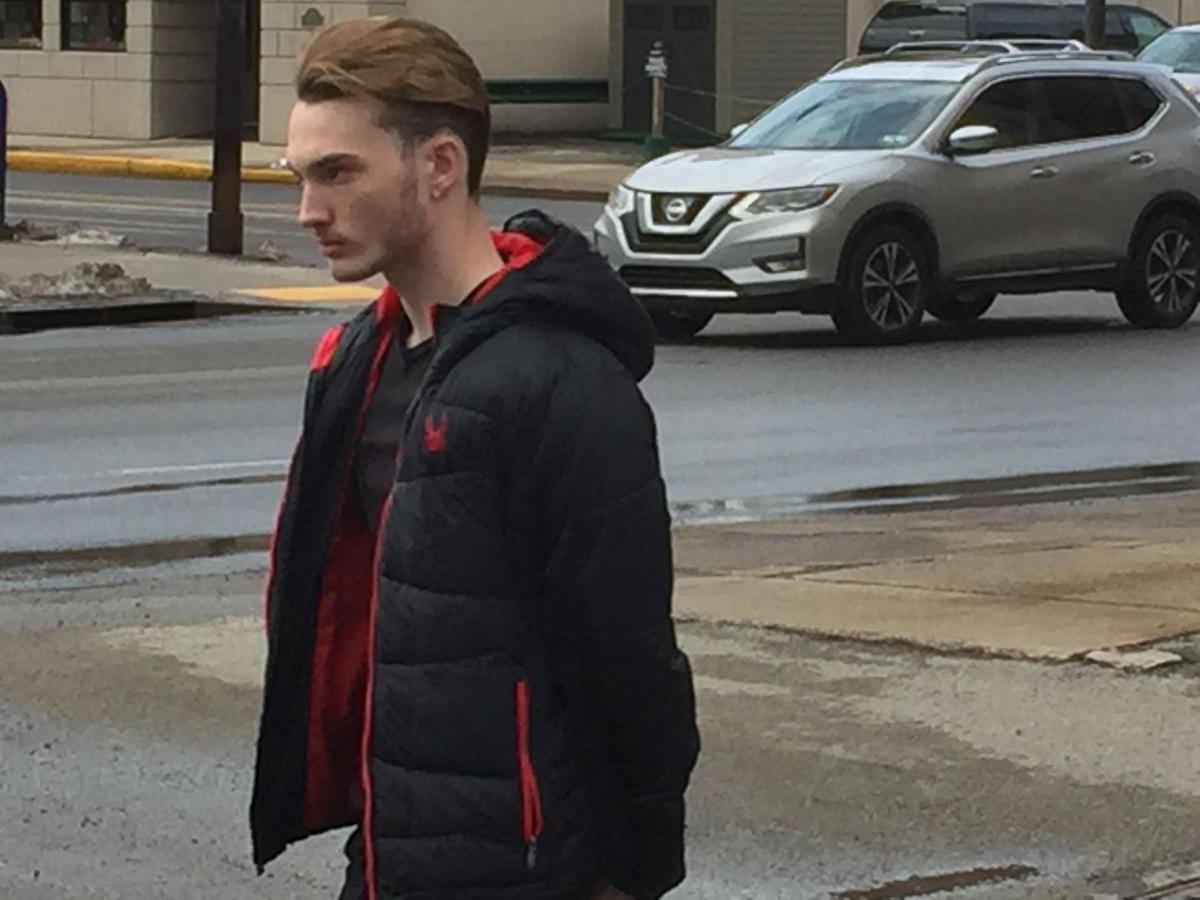 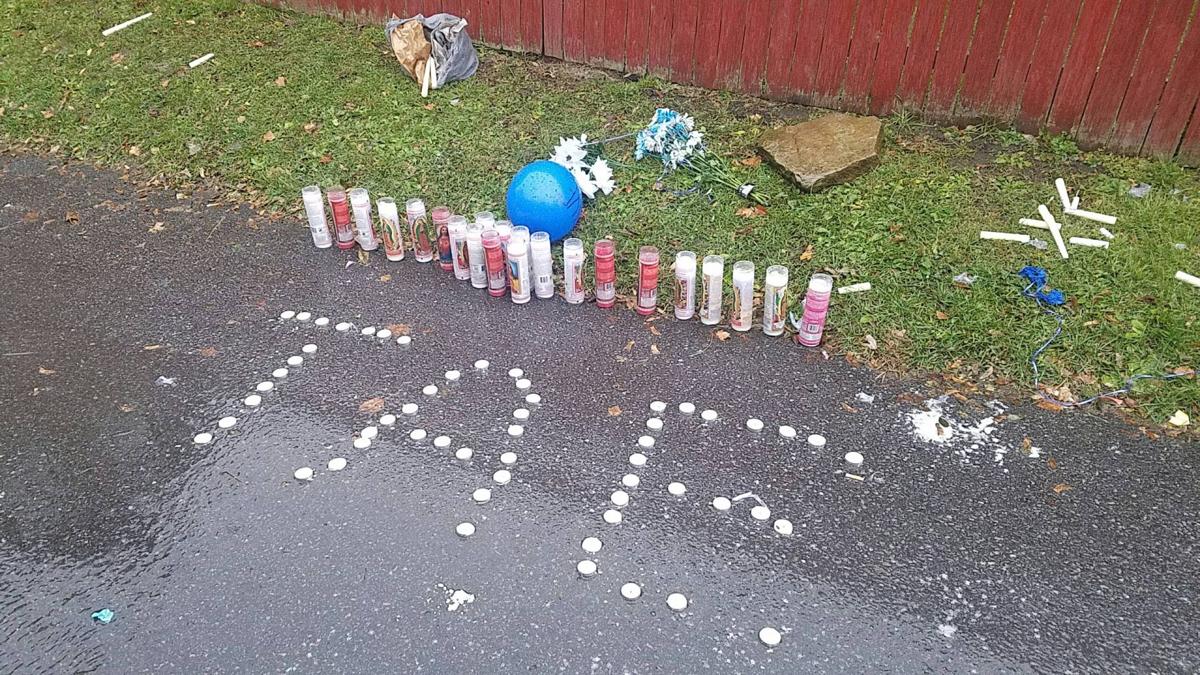 A small streetside memorial paid tribute to Tavion Williamson on Tuesday, Dec. 5, 2017, at Glitch Alley in Hornerstown – where the Georgia teen was shot dead.

A small streetside memorial paid tribute to Tavion Williamson on Tuesday, Dec. 5, 2017, at Glitch Alley in Hornerstown – where the Georgia teen was shot dead.

EBENSBURG – Opening arguments were heard and nine witnesses testified in Cambria County court Monday as a trial began in a 2017 homicide case out of Johnstown.

The defendant, 20-year-old Ethan S. Williams, formerly of Johnstown’s West End, faces charges of criminal homicide, aggravated assault and two firearms offenses. Police and prosecutors allege that he is the person who shot and killed 18-year-old Tavion C. Williamson on Dec. 3, 2017, in a Hornerstown alley.

Assistant District Attorney Kevin Persio, who is prosecuting the case against Williams for the Cambria County District Attorney’s Office, began his opening argument by listing all the evidence that he doesn’t have. The gun used by Williamson’s killer has not been found, and there are no fingerprints, DNA or any other pieces of forensic evidence linking Williams to the crime, Persio acknowledged.

Instead, Persio said, the prosecution’s case against Williams rests on “old-fashioned police work” – interviewing people with knowledge about the crime. The testimony of a witness who allegedly saw the shooting will incriminate Williams, said Persio, who told jurors that they “will be convinced that this witness was in the alley that night and that he saw what happened.”

Williams’ attorney, Randall H. McKinney, of Pittsburgh, countered in his own opening argument that the case against his client is based on nothing but innuendo, gossip and rumor and that the witnesses who named Williams as Williamson’s killer will be proven unreliable before the trial is over.

“The witnesses in this case, the evidence will show, contradict each other,” McKinney said.

Much of the testimony delivered on Monday dealt with technical details of the investigation into the killing, such as the timing of the 911 calls reporting the shooting and the placement of the gunshot wounds that killed Williamson.

Robbin Melnyk, Cambria County’s 911 director, testified that the first 911 call reporting the shooting, placed by neighbor Denise Williams, was answered by a dispatcher at 8:26 p.m. and 11 seconds.

“I heard four gunshots go boom-boom-boom-boom, and I grabbed my phone and called 911,” Denise Williams said in her own testimony.

Another neighbor, Christopher Martin, testified that he heard gunshots near his house, went outside and noticed a body lying in a nearby alley. Martin went to check on the person and discovered that he wasn’t breathing and had no pulse, he testified.

A crew from 7th Ward EMS arrived at the scene about four minutes after they were dispatched, according to Melissa Hillegas, one of the emergency medical technicians on that call. She and her partner found Williamson’s body on the pavement on Glitch Place, a narrow alley that runs roughly east-west. He “was obviously beyond help at that point,” she said.

Asked to point out on a map of Hornerstown exactly where Williamson’s body was located, Hillegas and Martin both indicated the section of Glitch Place that runs from Pine Street to Sparrow Place.

The alley was so narrow, Hillegas said, that she couldn’t fit the ambulance down it – she had to park on Pine Street and walk to the scene. There was a wooden fence on one side of the alley and a tall row of hedges on the other, according to pictures of the scene.

Other pictures shown to the jury show Williamson’s body lying face-up in the alley, dressed in a black jacket, a dark blue hoodie, jeans and blue sneakers. He had a white plastic grocery bag looped over his right arm and a large bag of Funyuns in his hand; close-up shots showed half-chewed Funyuns in his open mouth and more of the onion-flavored rings scattered on the pavement around his body. There was a gunshot wound below his left eye.

“He appeared to have been blindsided,” Hillegas said.

Several members of the Johnstown Police Department who played minor roles in the investigation testified briefly.

Officer Larry Woodard, the first officer at the scene of the shooting, said he kept bystanders back from Williamson’s body and made sure no evidence was disturbed or tampered with. Sergeant Michael Plunkard testified that his K-9 partner alerted on a section of fence near the shooting site; officers then found what looked like a bullet hole in the fence, he said.

Sergeant Greg Lamantia, who at the time was working as a school resource officer at Greater Johnstown Middle School, said he pulled surveillance video from one of the school’s cameras that showed a person running at 8:26 p.m. up Messenger Street past the school, a few hundred feet from the site of the shooting. That video was played for the jury.

Joseph Hribar, Cambria County chief deputy coroner, testified at length about evidence gathered from Williamson’s body at the scene of the shooting and during an autopsy the next day at ForensicDX in Windber. The official ruling by the coroner’s office was that Williamson died of massive blood loss caused by multiple gunshot wounds, Hribar said.

Prompted by autopsy photos, Persio asked Hribar dozens of questions about the locations of the entry and exit wounds on Williamson’s body and about Williamson’s tattoos – the initials “BD” in cursive on one arm, the nickname “Taye” on the other arm, a dollar sign on the chest and the word “MOB” on the left hand, with the “O” replaced by a bag of cash.

McKinney focused during several cross-examination opportunities on the lighting conditions and visibility at the shooting scene. He asked Hillegas what sources of light were present. She said that the Johnstown Fire Department set up generator-fueled portable spotlights and that she thought there was a streetlight at either end of the section of alleyway where the shooting happened. Later, he asked Hribar whether he had taken any pictures of the streetlights at the scene; Hribar replied that he hadn’t, that he could recall.

‘The streets told me’

The last witness called by the prosecution on Monday was Shakeya Salter, Williamson’s aunt, who lived in Hornerstown at the time of the killing, but has since moved to Gaithersburg, Maryland. She provided testimony about the last few months of her nephew’s life.

Salter said Williamson moved to Johnstown earlier in 2017 from Columbus, Georgia, a city on the Alabama-Georgia line with a metropolitan area of about half a million people. He had been getting in unspecified trouble there, she said, but added in response to a question from Persio that she didn’t know whether or not he was a member of a gang. He didn’t have support from his relatives in Georgia and was largely “raising himself,” she testified.

“He wanted to start over,” she said. “Columbus, Georgia, was too much for him.”

When Williamson got to Johnstown and moved in with Salter on Oak Street, she said, his grandmother wouldn’t send the paperwork she needed to enroll him in school, so he spent most of his time hanging out around the house or outside. She “called him all the time to see what he was doing, where he was at,” she said, but he spent much of his time at other relatives’ or friends’ homes.

On the day he died, he and Salter went next door at around 5 p.m. to attend a young cousin’s birthday party. Williamson spent about two hours at the party, playing with kids in the living room, before he left and went back to Salter’s home.

When Salter got home herself a few minutes later, she saw Williamson napping on a couch. His cellphone was ringing “off the hook,” she said, and eventually he woke up and went upstairs to answer it. Soon afterward, he came back downstairs, put on a jacket and went out the back door.

About 20 minutes or so later, Salter said, another cousin who was at the house got a call that there had been some shooting nearby. Salter tried to call Williamson to make sure he was OK, but he didn’t answer. A few minutes later, the cousin got another phone call, and they learned that Williamson was the one who had been shot.

Later, she said, Detective Mark Britton of the Johnstown Police Department showed her a surveillance camera photo of a man that had been taken at 3 Reds Tavern on Horner Street, near the shooting scene. Britton asked her if she knew who that man was. She didn’t, she said, but she asked a relative who did know, then gave the name to Britton. She said on Monday that she couldn’t remember what that name was.

During cross-examination, McKinney asked Salter if she remembered telling Britton that Williamson had had “beef” with a group of boys from Johnstown about “territory” and that he had been shot at a couple months before he was killed. She did, she replied.

McKinney asked if she remembered telling Britton that “Ethan” had killed Williamson.

“That’s what the streets told me,” she replied.

More witnesses are expected to testify when the trial resumes on Tuesday morning. The trial is scheduled to last through Friday.

Johnstown Police are trying to figure out why a Georgia teen was gunned down Sunday night in Hornerstown – and who pulled the trigger.