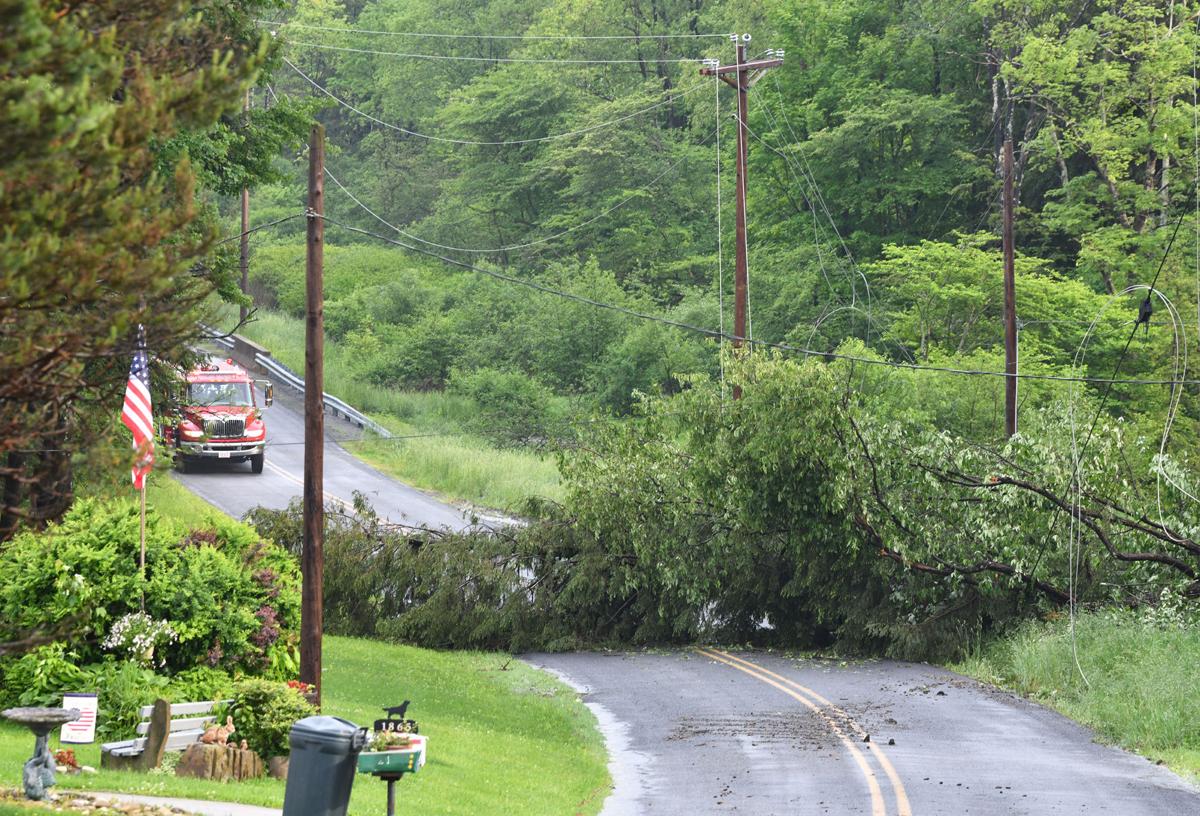 A storm caused a tree to fall across Killen School Road in Barr Township on Wednesday, May 29, 2019. 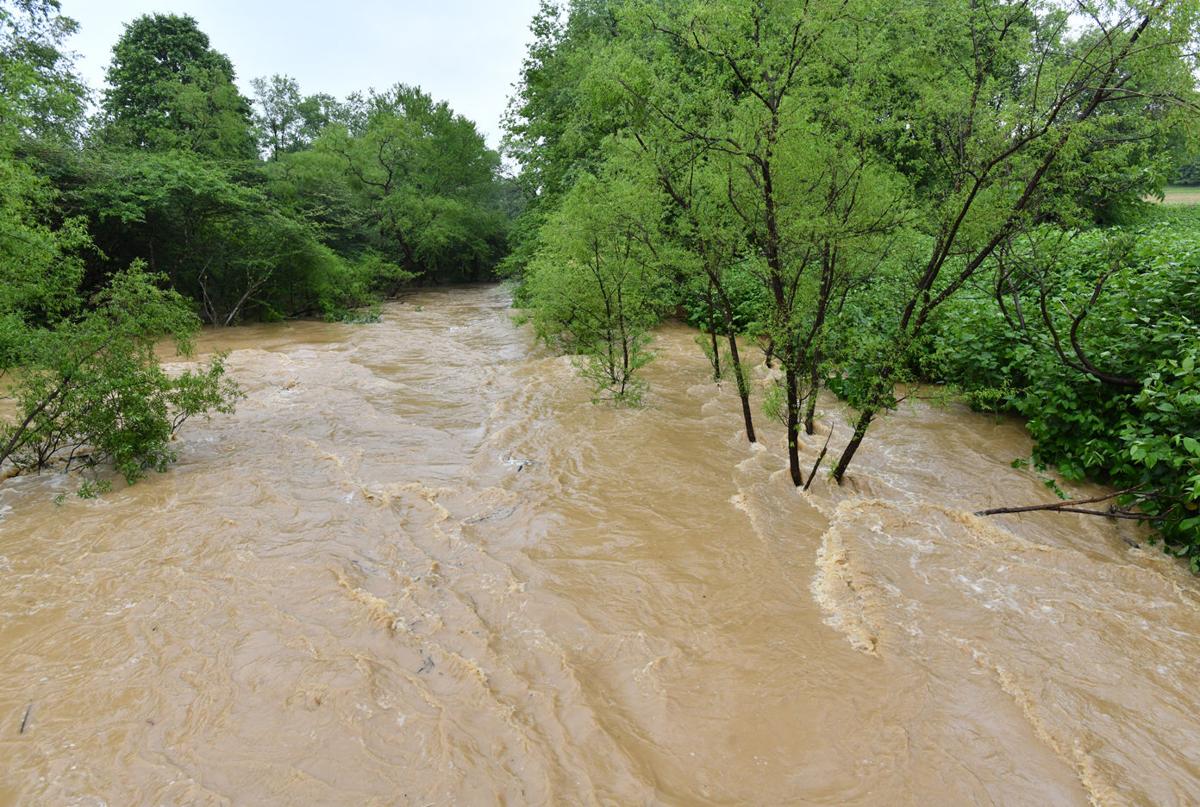 A swollen Blacklick Creek flows under Amadei Road in Barr Township on Wednesday, May 29, 2019.

A storm caused a tree to fall across Killen School Road in Barr Township on Wednesday, May 29, 2019.

A swollen Blacklick Creek flows under Amadei Road in Barr Township on Wednesday, May 29, 2019.

Jackson Township fire officials were dealing with a number of fallen trees, including ones that closed parts of Dishong Mountain and Blackburn roads Wednesday evening as storms continued to hit the region.

Conemaugh Township Fire Department was sent to Quemahoning Dam Road because wires were reported down along the roadway, while another fallen tree was removed from the area of Penn Avenue and Abex roads.

“We’ve had residents call us reporting several trees falling on their properties – as many as 10,” Jackson Township Manager Dave Hirko said, blaming the combination of heavy rainfall and winds.

At one point, Jackson Township Fire Department had water flowing into its own station bays, he added.

“There’s just nowhere for the water to go,” Hirko said.

While a tornado was spotted in the Penn Run area of Indiana County, 911 officials in Cambria and Somerset counties reported minor weather-related issues occurred throughout the region overnight into Wednesday.

No injuries were reported, 911 supervisors said.

The storm was the latest in a series that have occurred over the past week – and with a familiar weather pattern creating an opportunity for more later this week, Gov. Tom Wolf was urging Pennsylvania residents to stay alert – and be ready for the worst.

“We know the threat of severe weather is real and Pennsylvanians need to be prepared,” Wolf said. “Please remember to use caution and stay tuned into weather reports for any important news as inclement weather develops.”

The past few weeks have been very wet, but the center that tracks rainfall totals in the northeastern United States says the monthly total is typical for May.

May is often the Johnstown region’s wettest month, with more than 4.5 inches falling on average.

As of Tuesday, the Johnstown-Cambria County Regional Airport’s weather station had recorded 4.07 inches.

Last May’s total topped that – but with a few days left in the month, including Tuesday night’s rainfall still not counted, it’s possible May 2019 totals could surpass the average, staff with the North East Regional Climate Center reported.

Nearly 220 vehicles – most of the dealership’s inventory – sustained damage from hail, some of which reportedly were the size of golf balls, staff said.

“Every vehicle outside on our lot was impacted – whether it was new or used,” Thomas Team Honda’s General Sales Manager Tim McMinn said.

“I’ve been in the business for 15 years and we’ve never had to deal with hail damage in that time.”

The dealership is aiming to make the best of it, he said.

Insurance adjusters have already toured the lot to calculate damages and the dealership is fixing vehicles on an ongoing basis – but for now, bargains are available for those who aren’t concerned with the cosmetic damage, McMinn said. Vehicle titles remain unchanged and full factory warranties still apply, he added.

Inside the dealership’s showroom Wednesday, one vehicle’s hood was repaired on one side to show that the company’s body shop can fix the damage.

Laurel Auto Group was also advertising a "Hail Sale" this week in the wake of storm damage inflicted on its lot.

Providers said many of those claims originated from the Geistown and Richland areas, but declined to provide estimates on their claim totals.

Brian Hollern of Hollern and Sons Auto Sales on Scalp Avenue said his dealership partnered with Dentworks Paintless Dent Repair of Johnstown this week to serve as an emergency repair site for the region’s damaged vehicles.

“Our area doesn’t get too much hail damage – but after last week’s storm, the influx of vehicles they were seeing was too big for one building to handle,” Hollern said.

Dentworks, which uses equipment to fix dents without harming a vehicle’s finish, responded by bringing in a hail damage repair team from Georgia to assist, he added.

Hollern said the company is also partnering with insurance agencies, including Erie, to get damage corrected.

He said the backlog of repairs should be completed over the next few weeks.

The National Weather Service in Pittsburgh sent a crew to the Penn Run area of Indiana County on Wednesday and was able to confirm a low-level EF-0 tornado touched down there.

No structural damage was reported by the tornado Wednesday.

But it’s the third twister in the county in a week.

Before this month, only 13 were confirmed in Indiana County in the nearly 70 years prior, National Weather Service officials reported.

A National Weather Service Meteorologist in State College said there were no indications of any tornado activity on the ground in the west-central Pennsylvania territory – Cambria County included – on Tuesday night.

There were several reports further east in the Lancaster area that were being reviewed.

Pennsylvania, on average, records 16 tornadoes a year, and this year’s total is already at 20 through five months.

Tornadoes are rated by speed on a six-level scale and as of Tuesday none were higher than an F2 level, meteorologist Mike Jurewicz said.

A powerful thunderstorm Tuesday night knocked down trees and utility lines across the region – and as of 10:30 a.m. Wednesday, part of Dishong Mountain Road remained closed.

STEVENS[mdash] Ronald D., 76, Carrolltown, passed away August 10, 2020 at HAIDA Healthcare and Rehabilitation Center. He was born February 9, 1944 in Spangler, PA the son of Cyril and Elizabeth (Kelly) Stevens. In addition to his parents, he is preceded in death by a sister Jane Marie, broth…