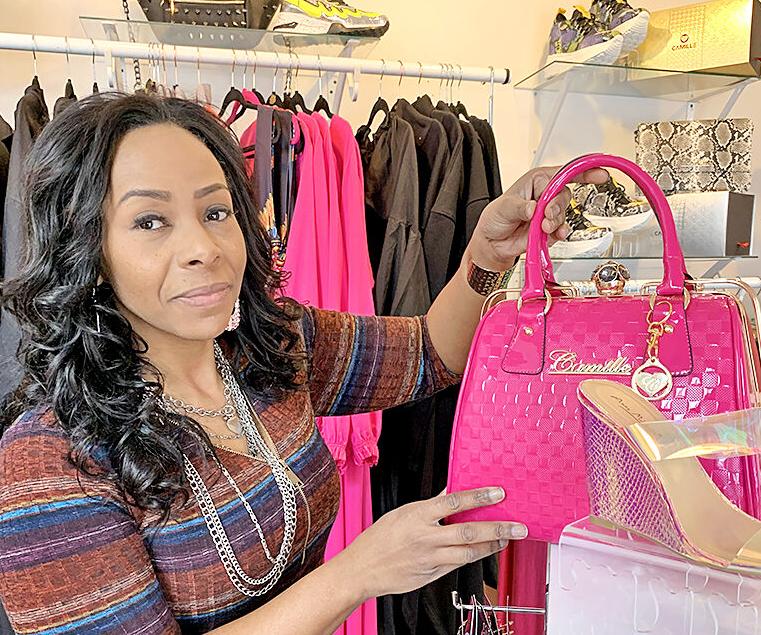 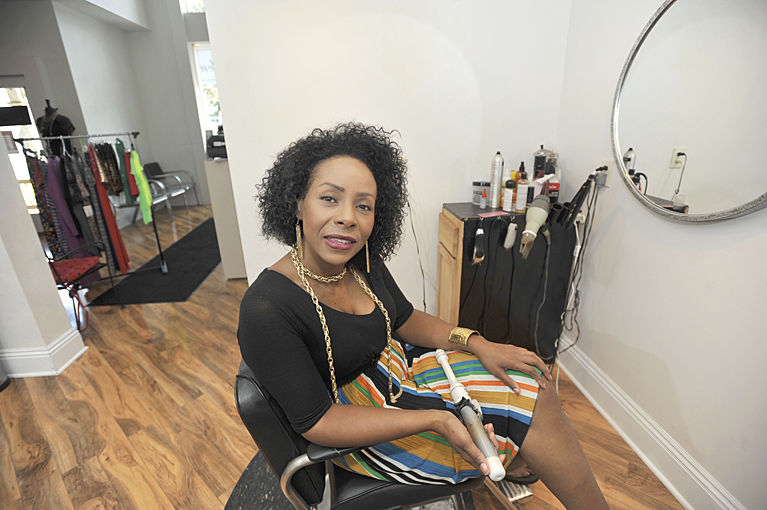 Camillya Taylor, owner of Camille’s House of Styles Salon & Boutique, opened a downtown Johnstown location in 2018 in addition to one in Moxham. 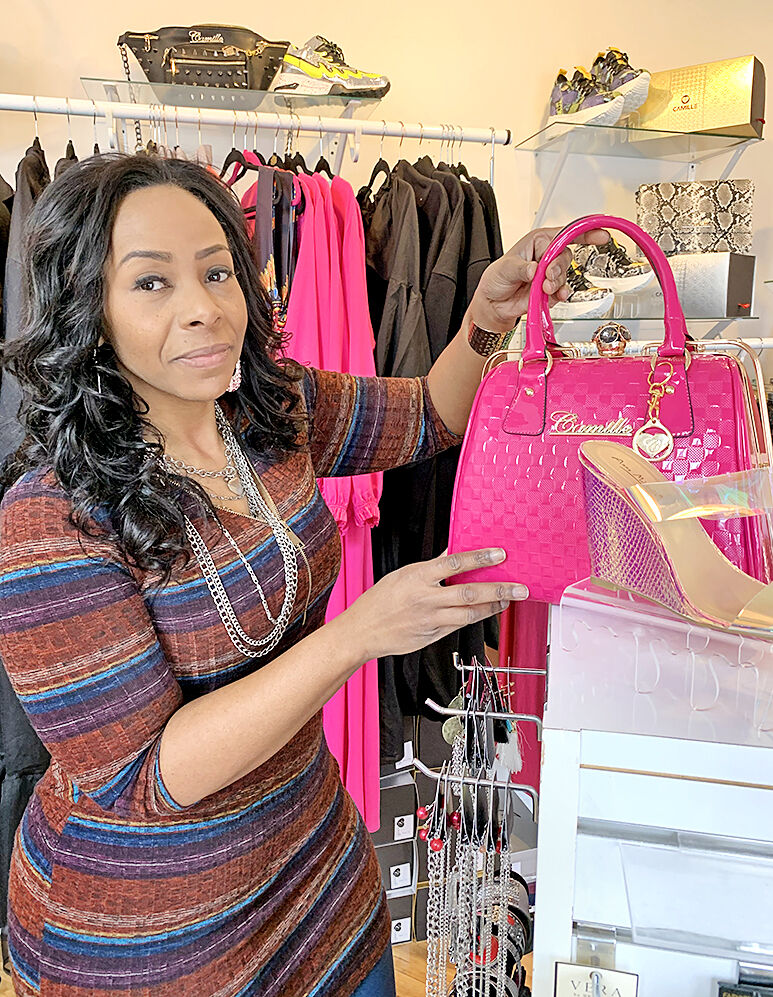 Camillya Taylor’s parents saw glimpses of a future stylist and fashion designer in her as she was growing up.

She would always do her sisters’ hair, her parents, Sabrina and Arthur Hardison, said.

Taylor is the oldest of their four daughters and carried a lot of responsibility.

“She always took care of her sisters,” Sabrina said. “If they all went to the playground, she made sure they were OK. She always told them, ‘If no one else likes us, we have each other.’ ”

The family lived in Indiana County, and they were the only Black family in their school, Sabrina said.

“They got along with everybody, but there were a lot that didn’t like them because of their color,” she said. “Camillya told them, ‘We have each other.’ She was 12 or 14 years old. The girls still go to her right now for help in tough times. She is very knowledgeable.”

‘Police as our friends’

The Hardisons are originally from Prospect in Johnstown, but moved to Norfolk, Va., while Arthur was in the U.S. Navy from 1972 to 1979, and then to Indiana because Arthur, a police officer, had taken a job with the Indiana University of Pennsylvania police department.

The family returned to Johnstown when Camillya was 18 years old.

“My dad was was a preacher and a police officer,” Taylor said. “He was super strict, but strict in a way that would teach you lessons.”

In their childhood, Taylor and her sisters would often walk to the local Sheetz in Indiana by cutting through the IUP campus, where their father said they were not allowed to go alone.

Their father’s fellow officers would see the girls and give them a ride to to the store so they would avoid trouble with their father. The running joke was that their father would put them in jail if he found out.

“To me, growing up, I always saw police as our friends,” she said.

Now 44, Taylor said she’s been distraught over police violence against unarmed Black citizens, especially George Floyd, of Minneapolis, whose life ended with his neck under the knee of a white police officer who did not relent for nine minutes despite Floyd’s cries that he couldn’t breathe.

“To see police abuse people, I didn’t understand it,” she said. “This is not how it’s supposed to be. It was the hardest thing to wrap my head around. When I hear people say things like, ‘I hate the police’. I’m like, ‘Wait, wait, they’re not all like that.’ And sometimes you get the rebuttal like, ‘You are on the wrong side.’

“It’s hard to be on the wrong side when this is all I grew up with. My dad being a cop, my dad saving other kids. If you were to go to Indiana and say, ‘Do you know Art?,’ they would say, ‘Yeah, there were times we were doing stuff wrong and he took us home.’ “

Her salon and boutique, Camille’s House of Styles, is located in Johnstown’s Moxham neighborhood.

She said she’s usually all business and doesn’t show emotion. But thinking about the state of race relations since George Floyd’s death, she choked back tears.

“So, for me, this whole situation is hard to watch sometimes. It’s not what I know... And I’m not saying all police officers are like that. I know quite a few in the city (Johnstown) who I absolutely love. But it would be nice for kids to know ‘That’s a common place for safety.’ ”

One of Taylor’s mentors as a hairstylist, Genene Price, lives in Johnstown, but is a native of Minneapolis.

“I lived two doors down from the store where (the Floyd killing) happened,” Price said.

“It was my neighborhood store when I was a child. I visited last year. To see my neighborhood change that dramatically was ... interesting. My mother lives by the police station and everything that was burned up.”

She put it in a Johnstown perspective.

“Let’s say Scalp Avenue – from the Value It all the way to Windber – they burned all that down,” she said.

When the protests started, they were quiet protests, she said.

“Outsiders destroyed the city’s buildings,” she said. “We (native to Minneapolis) don’t do that.”

Those native to Minneapolis have protested peacefully before, she said, when a police officer fatally shot Philando Castile, a Black man, in his car in 2016.

But in 2020, racism had been emboldened by the national political environment, she said.

“One person can sow destruction, and others will follow,” Price said.

‘It comes from love’

Talking about Taylor, Price said she is a person who is a leader and role model.

“She is as genuine a person as you can meet,” Price said. “It’s her family. They are all genuine. It comes from love.”

Both of Taylor’s parents are pastors at Works of Deliverance Fellowship International Ministries in Moxham.

“When it came to raising our daughters, we believe the way the Bible says,” Sabrina said. “‘Train up a child in the way they should go, and when they are old they will not depart from it.’”

Arthur said he always stressed to his children that they don’t have to follow the crowd.

“No matter what anyone else is doing,” he said, “you don’t have to do it the same way.”

Taylor is taking that lesson into the realm of fashion.

This year marks the 10th anniversary of Taylor’s first fashion show in Pittsburgh. There have been many others in various cities since then.

She’s planning a fashion show for March with a new line she created called “Modest,” which is inspired by a religious woman she met who was overlooked by other designers.

“Last year, I did a fashion show in Lancaster,” she said. “A Muslim woman was there. Designers overlooked her. She wanted her arms and legs covered. It inspired me.”

“I would like to work with all shapes, sizes, and ethnic backgrounds,” she said. “If you are a Muslim or Christian, this collection is designed for modesty.”

Price said Taylor is an excellent role model for young girls who are inundated with images of women in pop culture who are not good role models.

“Taylor’s presentation for young ladies to model themselves after is excellent,” Price said. “She has two beautiful daughters.”

Taylor’s children have attended Richland School District where, like her school days in Indiana, they are in a racial minority.

Similar to Taylor’s school-age experience recalled by her parents, Taylor said her children have faced incidents of bullying because of their race.

She said Richland School District has an excellent anti-bullying policy, but a lot happens outside of school.

Taylor’s been a leader of youth groups since her family moved back to Johnstown. She’s worked with students in Greater Johnstown School District after-school programs.

She said she’s seen first-hand the different opinions children have of others in different school districts.

Improving race relations in Johnstown could be achieved with temporary student swaps between school districts in the area to break down biases, Taylor said.

“I think it would be great to take 20 students from each school and just swap them out, I’d say, for a month.” she said. “Because you really need that interaction to understand where people are coming from.”

Both of Marsha McDowell’s sisters are living in Texas and have encouraged the Johnstown native to head south as well.