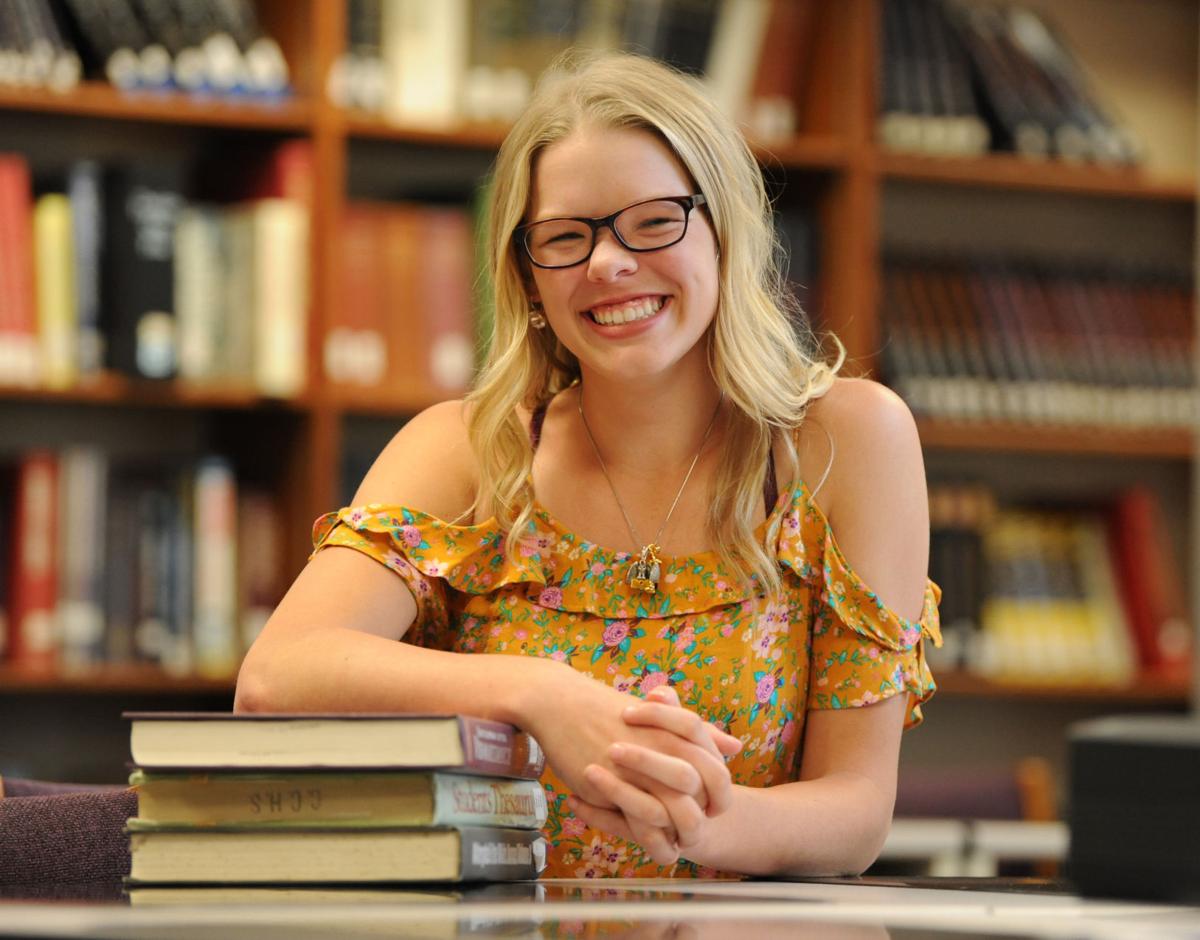 Central Cambria senior Julia Schaffer poses in the school library on May 24, 2017. 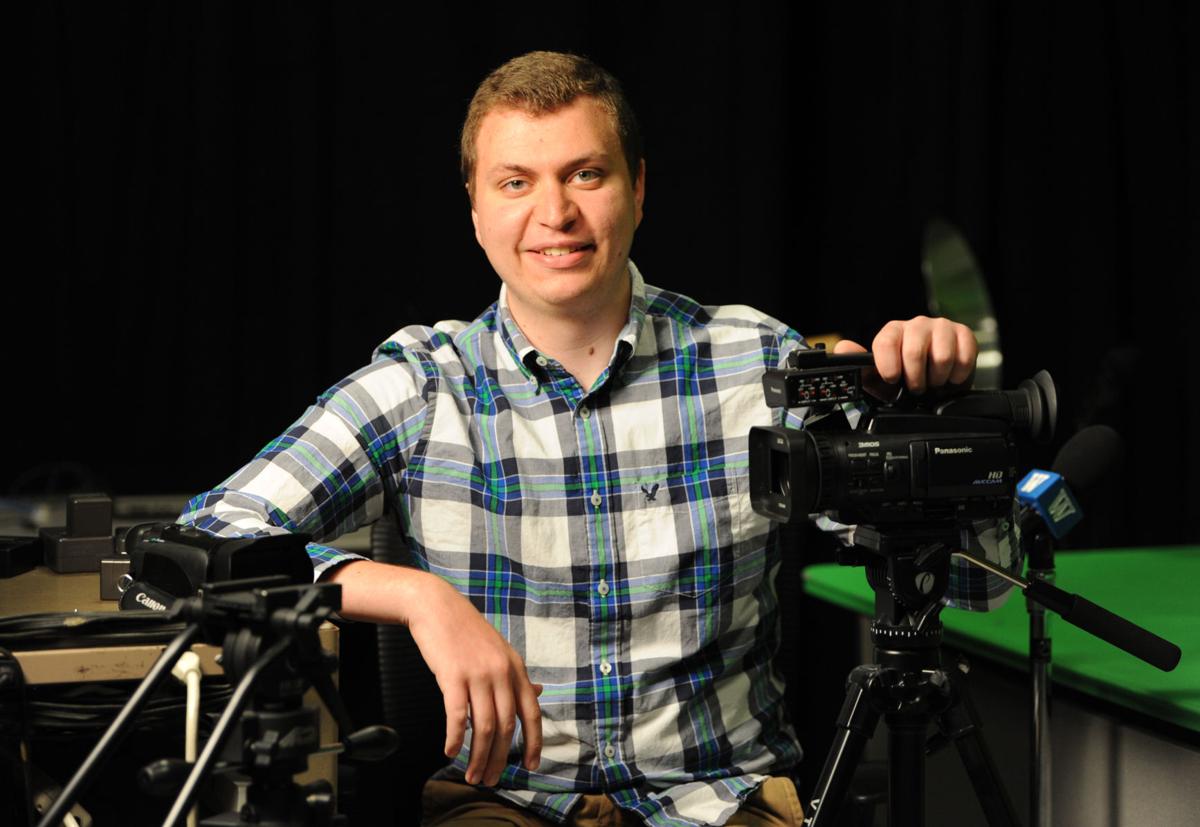 Windber senior Erik Blasic poses with video equipment in the school's studio on May 24, 2017. 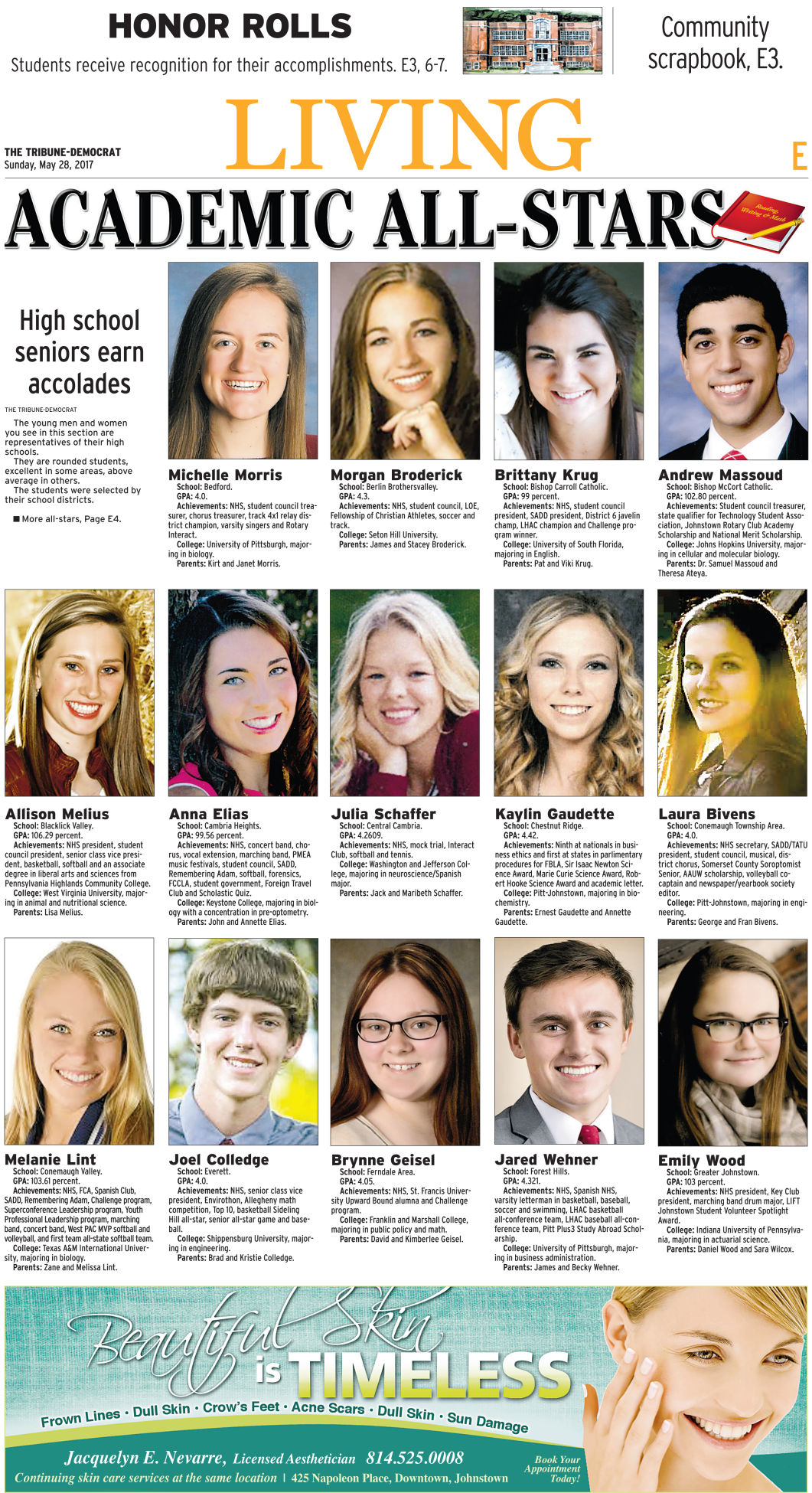 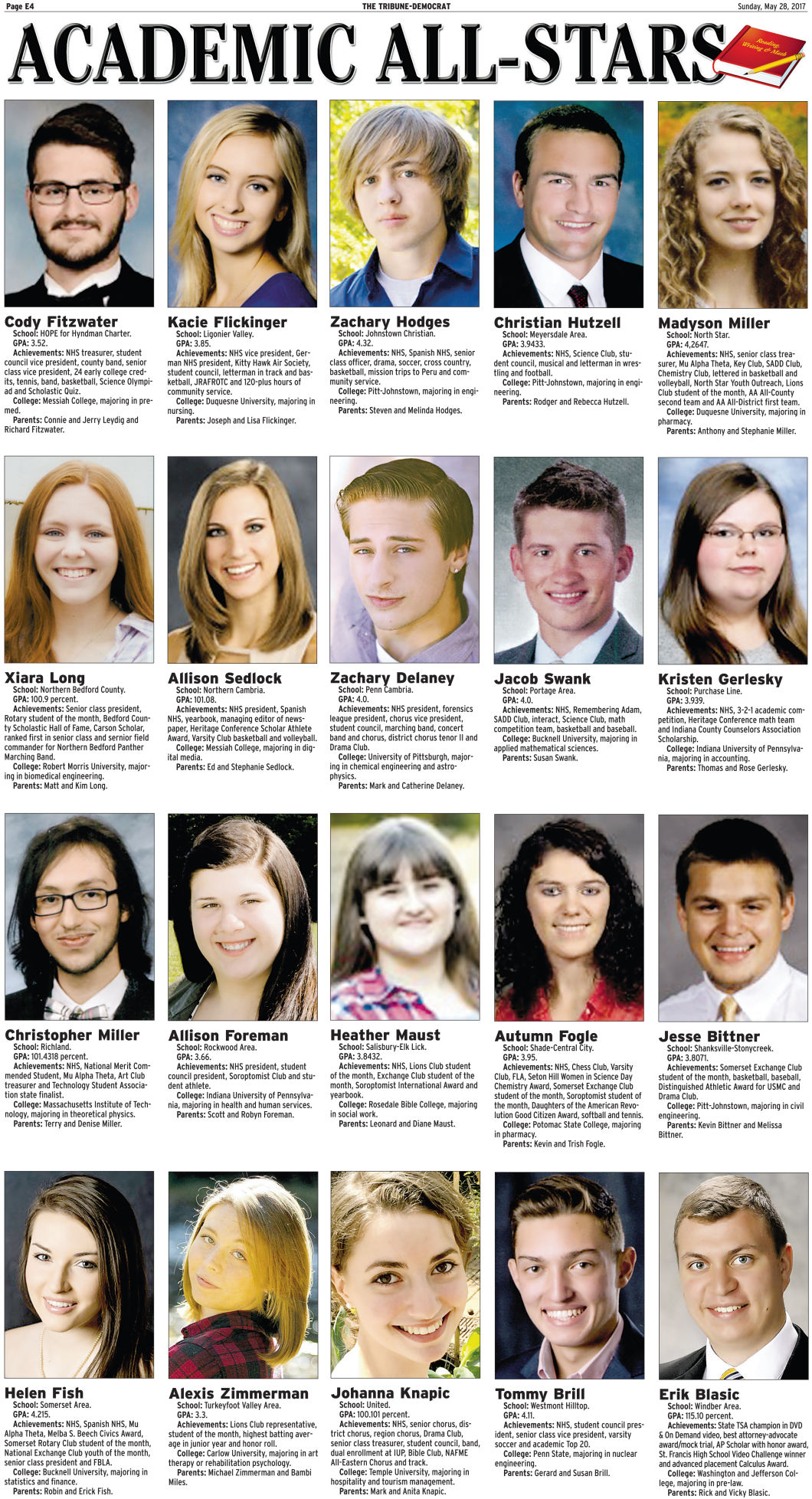 Central Cambria senior Julia Schaffer poses in the school library on May 24, 2017.

Windber senior Erik Blasic poses with video equipment in the school's studio on May 24, 2017.

Jared Wehner has within him a drive to succeed.

The Forest Hills High School senior isn’t sure yet if he’ll be named the school’s valedictorian, but it seems probable because he’s set to graduate with a 4.321 grade-point average.

“It’s a family standard that we go into school and we succeed,” the 18-year-old said. “My brother was salutatorian and I kind of want to follow in his footsteps. From a young age, we’ve been expected to do good.”

Wehner is among 34 seniors honored by The Tribune-Democrat as Academic All-Stars. The students were chosen for the recognition by their school districts.

All of the All-Stars are featured in Sunday Living.

Hard work is a common theme for these high-performers.

“There’s been times where I’ve have stayed up until 1 or 2 in the morning doing homework,” Wehner said. “There’s times I have to squeak out an A in the last day because of being so busy.”

“My parents support every decision that I make and without them I wouldn’t be where I’m at,” Wehner said. “They are a part of the reason I strive to do great things in school.”

He plans to attend the University of Pittsburgh and major in business administration, followed by law school.

“My goal is a career in the business of sports,” he said.

Wehner, son of James and Becky Wehner of New Germany, said he’s ready to graduate and move on to the next phase of his life.

“I have that instilled drive in me to keep pushing and getting good grades,” Wehner said. “I’m excited for it and ready to move on and see new things.”

Madyson Miller said being named an Academic All-Star is a great honor.

“Throughout my school year I’ve been working really hard to balance school and athletics,” the 18-year-old North Star student said. “All my hard work has finally paid off.”

She has been named the school’s valedictorian and will graduate with 4.2647 grade-point average.

“It’s such a great honor to be at the top of my class and know that I can be proud of all that I’ve done,” Miller said.

Miller also has lettered in basketball and volleyball.

“I would always try to find time during the seasons to set aside and focus on school and make sure that all my homework and studying was done,” she said.

In the fall, Miller will attend Duquesne University to study pharmacy.

“I like the research aspect of pharmacy, so I'm possibly going into that,” she said.

Miller, daughter of Anthony and Stephanie Miller of Jennerstown, said she’s excited and anxious to move on to college.

“I feel like I’m ready for the challenges, and I can face them and learn from them,” she said.

Windber’s Erik Blasic said being chosen as a scholastic all-star was surprising.

“It’s a great honor and I feel like I’ve worked really hard throughout my four years of high school, not only for myself but for my fellow peers and working for the school,” the 18-year-old said. “Being honored with this title is very rewarding and I’m pleased.”

As a top student with a 115.10 grade percentage, Blasic will likely be named the school’s valedictorian.

“I’ll find out at graduation, but I believe as of right now I stand at first,” he said. “That was one of my goals coming in as a freshman – I wanted to set a high standard to be first and achieve that, and I feel that after all this hard work I’ve put in it’s really rewarding.”

Blasic is president of the Student Council and a member of Mock Trial.

He’s also been active with the school’s Technology Student Association and has participated in various competitions that utilize science, technology, engineering and mathematics concepts.

He said time management was something he needed to focus on throughout high school.

“I have faith in myself that I can do it, and I like to challenge myself to see how far I can go,” Blasic said.

Blasic, son of Rick and Vicky Blasic of Windber, plans to attend Washington & Jefferson College and major in history with a program of study in pre-law.

“My future hope is to move on to law school and become a lawyer,” he said.

“Criminal law really attracts me – being a defense attorney or public defender.”

When Central Cambria’s Julia Schaffer found out she was selected as the Academic All-Star, she felt honored.

“I’ve worked really hard in the last four years, and it’s kind of nice to see it all paid off,” the 18-year-old said.

Schaffer will graduate with a 4.2609 grade point average – making her the salutatorian.

“Since my freshmen year, grades have always been a big part of my life, and I’m proud of how it turned out,” she said.

She also participated in tennis and softball.

“My parents paid a large part in my being successful,” Schaffer said. “My mom went to law school and she knows how to stay focused, so she’s always pushed me to get good grades and do better.”

She plans to attend Washington & Jefferson College in the fall and will double-major in Spanish and neuroscience.

She also plans to play softball.

“I’m going to get all my prerequisites for medical school so I might go on to that or get my Ph.D,” Schaffer said.

Schaffer, the daughter of Jack and Maribeth Schaffer of Ebensburg, said she’s ready to see what comes next.

“Ebensburg is a small town, so I’m excited to get out there and see the world and meet new people,” she said. “I think I’ve been prepared well.”

Greater Johnstown seniors have seen challenges, aim for bright future for themselves and the community