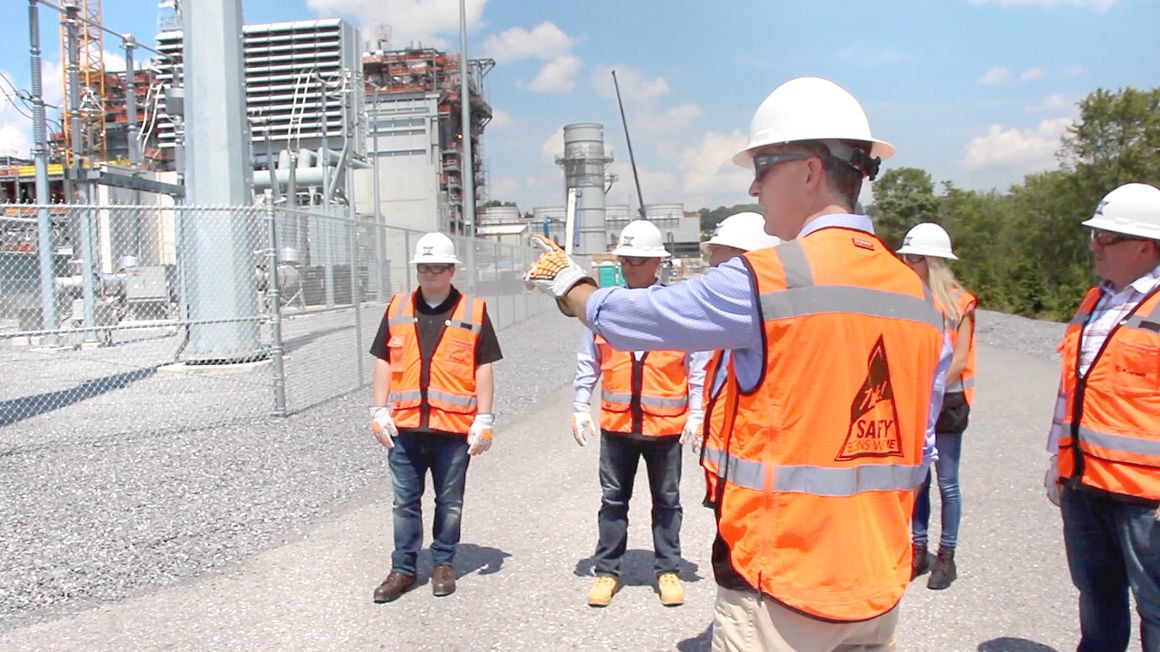 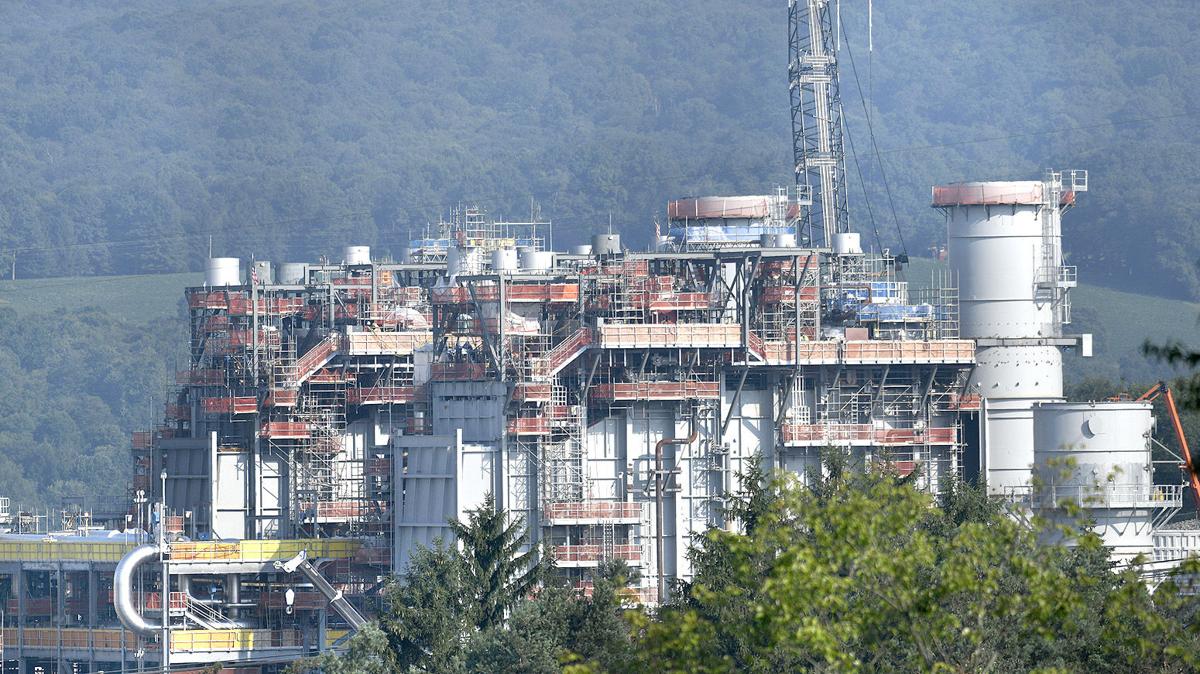 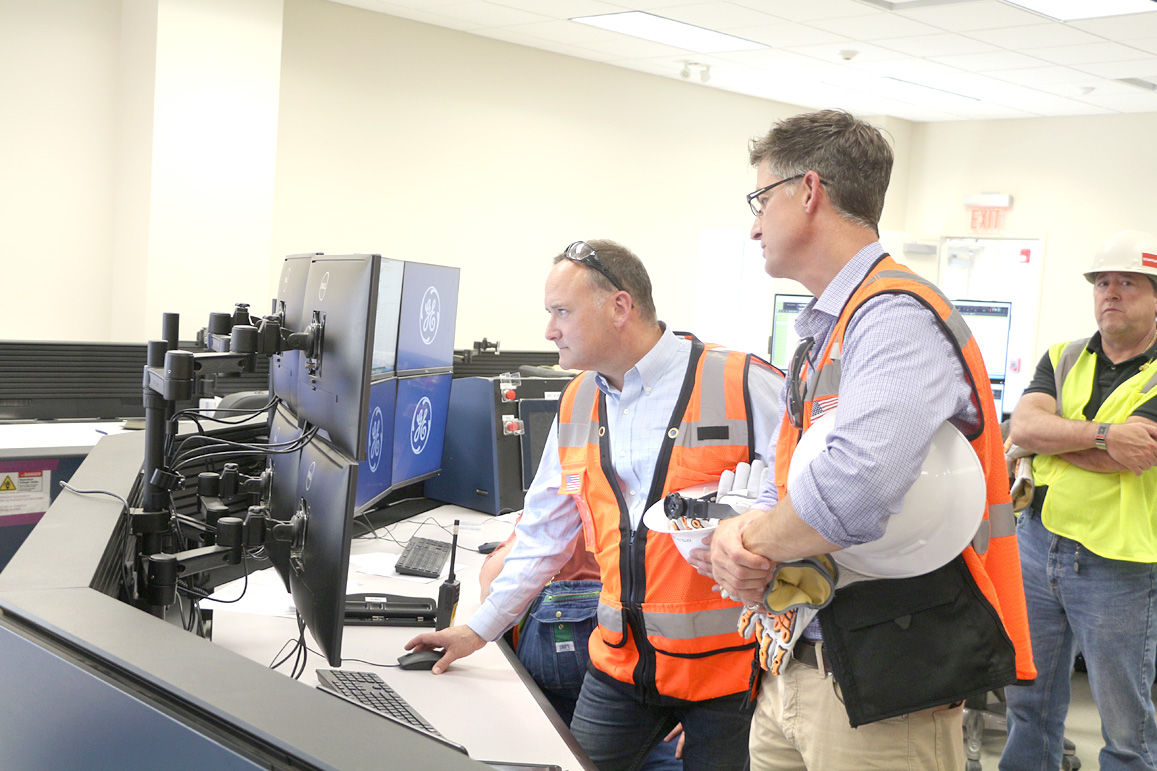 Brigham McCown (left), chairman of the Alliance for Innovation and Infrastructure, checks out one of the control stations in the CPV Fairview operations center as CPV project manager Jeff Ahrens explains. McCown toured the construction site Monday, July 29, 2019, as part of the Grow America’s Infrastructure Now coalition.

Brigham McCown (left), chairman of the Alliance for Innovation and Infrastructure, checks out one of the control stations in the CPV Fairview operations center as CPV project manager Jeff Ahrens explains. McCown toured the construction site Monday, July 29, 2019, as part of the Grow America’s Infrastructure Now coalition.

Jeff Ahrens got to spend Monday afternoon showing off the latest product of his life’s work.

The project manager for CPV Fairview Energy Center, Ahrens took local media and representatives of Grow America’s Infrastructure Now coalition on a tour through the $700 million power plant under construction in Jackson Township.

• Craig Stevens, who served in the George W. Bush Administration, including an appointment as chief spokesman with Energy Secretary Sam Bodman.

• Brigham McCown, chairman of the Alliance for Innovation and Infrastructure, who has held executive posts in three presidential administrations and was the first head of the Pipeline and Hazardous Materials Safety Administration.

McCown said his background with the pipeline industry oversight inspired his interest in CPV Fairview’s combined-cycle generations system. When completed next year, the plant will operate two turbines powered by natural gas and a third powered by the steam produced from water cooling the gas turbines.

“We call it free energy,” Ahrens said. “That’s where the efficiency comes from. The first gas turbines are high efficiency, and that’s about 40%. But with free energy, it runs through the steam turbine. Those two combined end up with a result of more than 60% efficiency.

“A typical coal plant would probably just have an efficiency between 30 and 40%.”

Months before it will operate, CPV Fairview has already had an impact on the local community, Ahrens told the visitors.

“We have had 1.8 million hours of union labor on the site,” he said. “It has really helped the economy here. We bring high-paying jobs.

“When we need workers, they come. It’s a great attribute about this labor market.”

The construction, which began in November 2017, followed months of remediation of a former oil company depot and salvage yard.

“We did almost $15 million cleanup on the site, hauling out 200,000 tons of baby clothes, toilets, all kinds of things,” Ahrens said.

The CPV Fairview tour illustrates the them of the GAIN coalition’s tour of Pennsylvania, McCown said.

“It’s primarily seeing how Pennsylvania has really come back,” he said, noting much of the state’s resurgence can be tied to expansion of energy industries, including the Marcellus shale natural gas production.

Stevens also pointed to the economic impact of natural gas, as seen at CPV Fairview.

“The 1970s to 1990s were tough on the economy here,” Stevens said. “To see this kind of development here is really a testament to the turnaround this area has seen.”

Snow white clouds were rising from Competitive Power Ventures approximately $1 billion natural gas plant Tuesday – a move that was years in the making in Jackson Township.