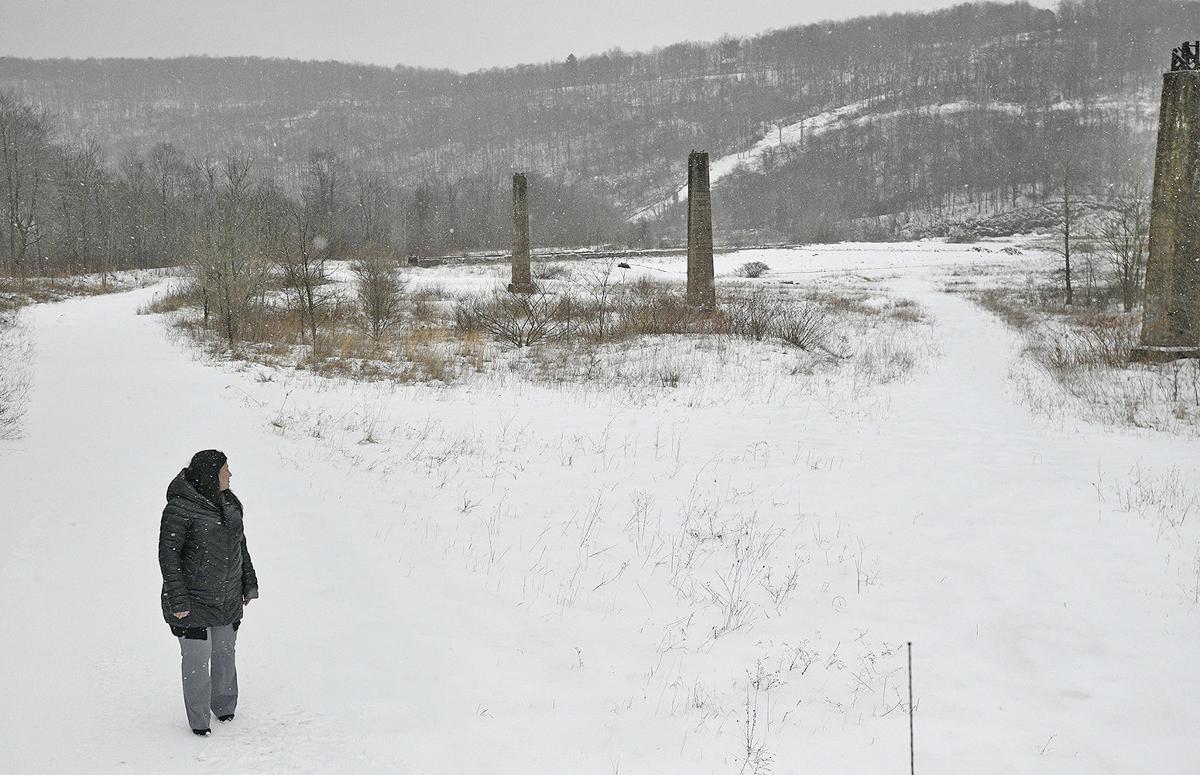 Greater Johnstown Redevelopment Authority Executive Director Melissa Komar checks out part of the 115-acre Johnstown Urban Industrial Park, which was once the site of the Rosedale Plant of Johnstown Bethlehem Steel Corp., on Monday, February 18, 2019. 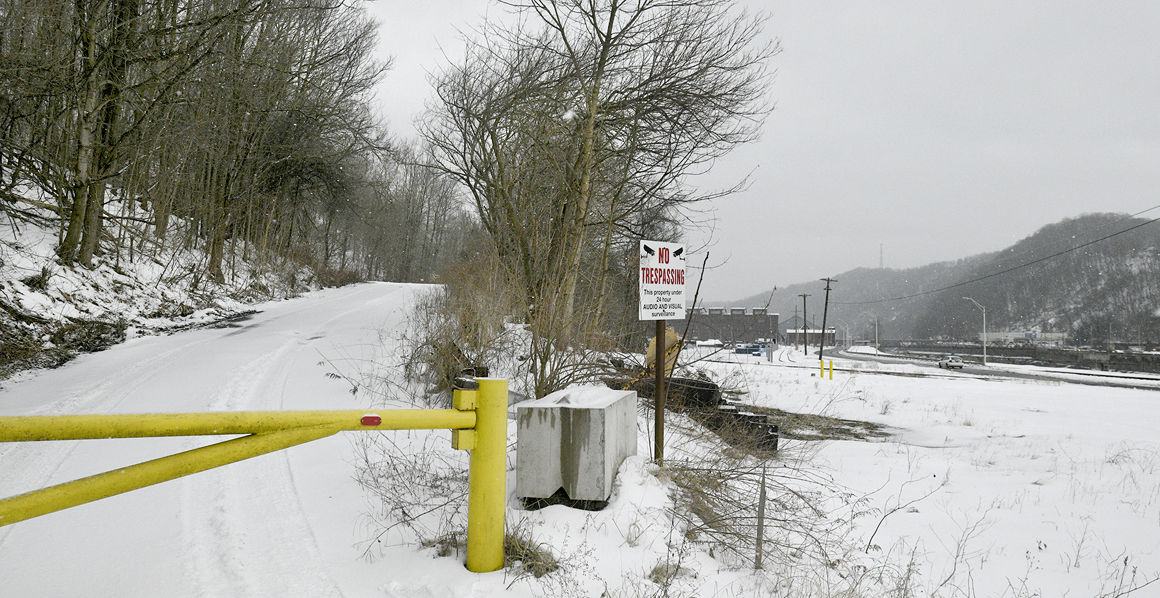 The Greater Johnstown Redevelopment Authority received money from the state to improve the road leading up the future site of the Johnstown Urban Industrial Park.

Greater Johnstown Redevelopment Authority Executive Director Melissa Komar checks out part of the 115-acre Johnstown Urban Industrial Park, which was once the site of the Rosedale Plant of Johnstown Bethlehem Steel Corp., on Monday, February 18, 2019.

The Greater Johnstown Redevelopment Authority received money from the state to improve the road leading up the future site of the Johnstown Urban Industrial Park.

The site, although mere minutes from the heart of downtown Johnstown, looked desolate – with only a few stone towers and graffiti-tagged remnants of brick buildings left from a bygone era.

No smoke from the coke plant. No train cars rolling about. No African-Americans, Slovaks, Poles, Italians and Germans working together, shift after shift.

Just the sound of a hollow wind tossing light snowflakes.

But there was optimism in the air, too.

Komar, executive director of the Johnstown Redevelopment Authority, along with other city and county officials and private organizations, are working to transform the former industrial property into what has been renamed the Johnstown Urban Industrial Park.

The long-term plan is to turn the site into, once again, an area for heavy industry. The authority estimates 500 to 800 direct jobs could one day exist at the site.

Michael Kerr, from the Greater Johnstown Water Authority, drove his pickup truck from Iron Street, next to the Conemaugh River, up the winding, rutted hillside to the JUIP location. A car would have struggled to climb the steep grade and safely navigate the icy surface.

Earlier this month, JRA learned it had received a $2.7 million Multimodal Transportation Fund grant to build a new road to the industrial park.

Without the road, the project cannot be developed, since the current path would not support heavy industrial traffic in a world with safety requirements much different than during the days when what Bethlehem wanted, Bethlehem did, as the most powerful economic driver in town.

Improving the road access, while installing infrastructure, is a major step in the process of developing the site – because having “land sitting up there with essentially no access and no utilities, it’s very hard for a local area to market that,” Cambria County grants facilitator John Dubnansky said. “So it was kind of a no-brainer for the city redevelopment authority to go ahead and pursue funding to get an access road and utilities put in to make the site usable and accessible.”

Dubnansky wrote a grant application to the state in which he explained how a new industrial park could benefit the city that has been in Pennsylvania’s Act 47 program for distressed municipalities since 1992.

JRA’s grant was the second-largest single amount awarded during a recent round of funding in which 50 projects, across 23 counties, got a combined $44.5 million. No other project in Cambria County and only one other in PennDOT Engineering District 9 received money.

“We are very pleased with the award,” Komar said. “We know this is the beginning of what could be the future for the Johnstown Urban Industrial Park.”

The authority still needs about $1 million more for the road project that it hopes to acquire through federal funding and/or private investment. The construction will include installing a 2,000-foot-long, 40-foot-wide paved roadway, along with sanitary sewer, storm sewer, gas, electric and water lines.

Two phases of brownfield remediation work have already been done to prepare the site.

“Many of these companies, if not all of them, are from outside of the state of Pennsylvania,” Komar said. “They see what we have to offer here. They love our natural resources, as far as relocating their families here. They love the cooperation that we have with our local government, with our outside municipalities and with what we’re able to provide here as far as real estate and the overall cost of living.”

If a park is completed, on the hilltop above, then an entire interconnected industrial region could once again exist within the city limits, which would increase the number of family-sustaining jobs and the positive ripple-out economic effect.

“We’ve all been collaborating organization-wise from the county and city levels and everything in between here recently to work together to help create jobs and create advanced economic growth here in the area,” Dubnansky said. “If you add a few hundred jobs in this area, it’s just a positive thing, because those jobs all lead to other improvements within our communities.

“These are folks that are going to buy homes in the area. They’re going to shop at our shops, eat at our restaurants. Everybody that we can add into our community is going to benefit other businesses as well.”

The tracts were designated Keystone Opportunity Expansion Zones in the early 2010s. That status allows for certain federal and state taxes to be eliminated for businesses on the land.

But little was done with the program until Komar came on as executive director in 2016 to lead the effort to get the road built and infrastructure installed as a first step.

“This is virtually unmarketable without infrastructure,” said Johnstown businessman Mark Pasquerilla, a JRA board member. “So, when Melissa came on board, we took a very aggressive role in seeking infrastructure here. We’ve had success obviously getting this grant.

Leaders of the effort to develop the park plan to use the tax-free status as an enticement to would-be developers.

“We would like to attract something big here,” Pasquerilla said. “We want to see this as a vibrant park.”

During the holiday season, a Johnstown resident or visitor can stop by the Bottle Works in Cambria City to look at some locally made art, take a stroll along the Iron Street trail past where the former Bethlehem Steel Co. property is being converted for new uses, enjoy a dancing light display on the Stone Bridge, eat dinner at PRESS bistro, watch and listen as a 36-foot-tall animated tree fills Central Park with Christmas cheer, and then grab a nightcap at Balance Restaurant.