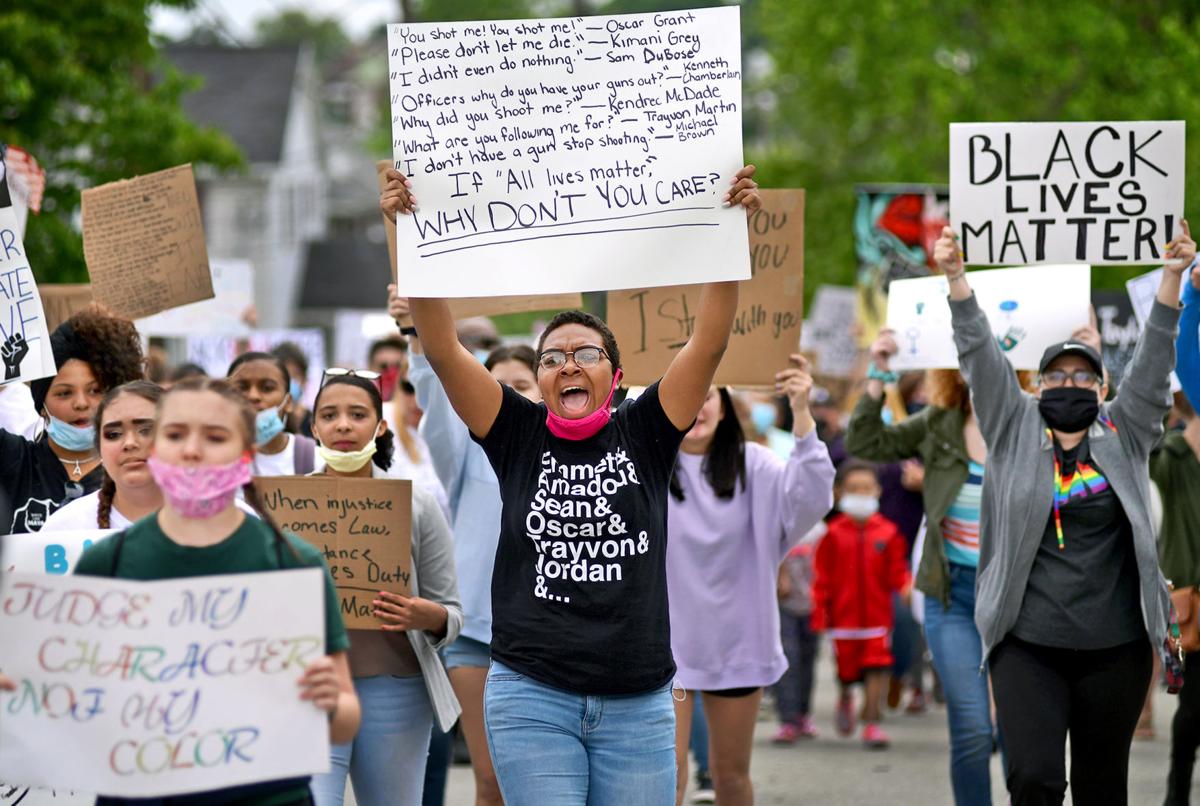 Breeann Springer, 16, of Somerset (center), one of the Somerset Area High School students who organized a unity walk Sunday, June 14, 2020, marches along with more than 250 attendees along Union Street in the city. 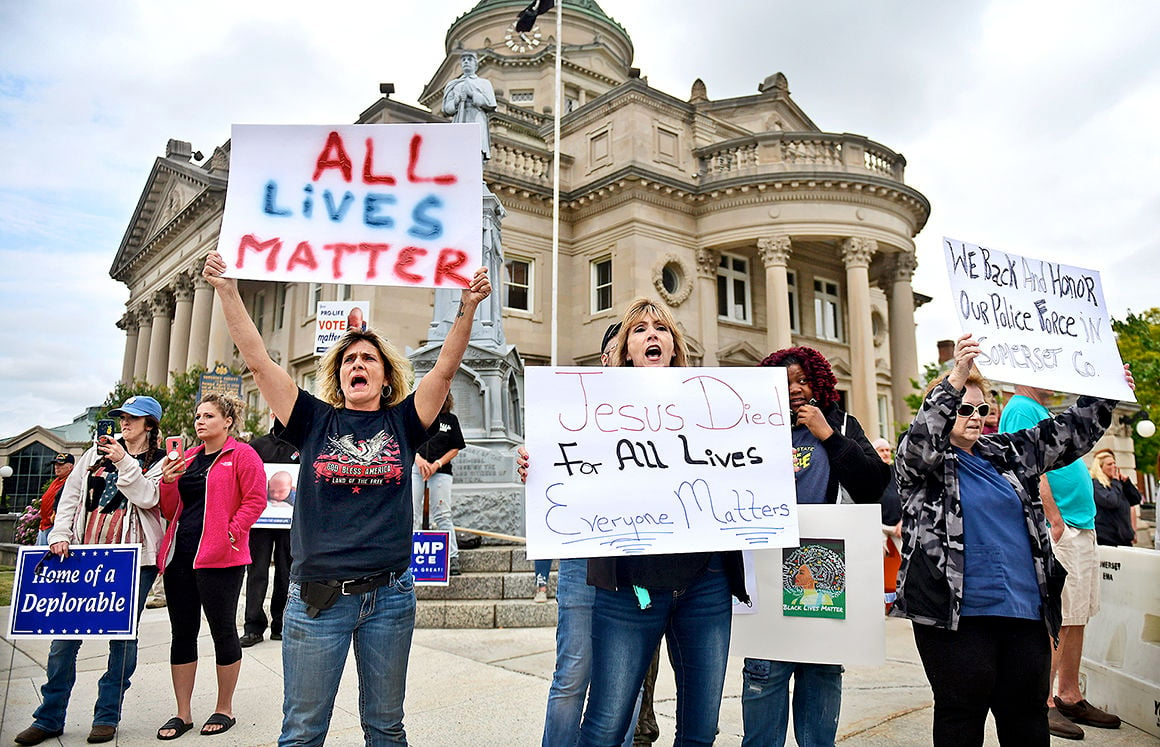 A small group of counterprotesters gathers in front of Somerset County Courthouse during a unity walk in the city on Sunday, June 14, 2020.

Breeann Springer, 16, of Somerset (center), one of the Somerset Area High School students who organized a unity walk Sunday, June 14, 2020, marches along with more than 250 attendees along Union Street in the city.

A small group of counterprotesters gathers in front of Somerset County Courthouse during a unity walk in the city on Sunday, June 14, 2020.

Chanting “I can’t breathe” and “Black Lives Matter,” more than 200 marchers moved through uptown Somerset on Sunday, calling for an end to racism and justice for George Floyd.

And despite a verbal clash with approximately 30 individuals waiting for them at the Somerset County Courthouse with “All Lives Matter” and “Trump 2020” signs, the event ended without violence or arrests.

The “Unity” marchers concluded their event on a peaceful note, singing and swaying to Bill Withers’ classic song “Lean on Me” before standing together in silence for 8 minutes and 46 seconds to honor Floyd, whose death in police custody on a Minnesota street last month turned into a rallying cry for change.

Breeann Springer, among a handful of Somerset Area High School students who organized the rally, said the moment offered them a chance to educate the community about why “Black Lives Matter” is more than a slogan.

A high school junior and one of several organizers who is black, Springer said hate speech, racist jokes and hurtful names have been an “inevitable rite of passage” in her small town for too long.

“In kindergarten, kids learn their ABC’s. In first grade, they learn nouns,” she said. “At what age do they learn hate?”

Springer said she was first called the “N-word” by another student when she was 8 years old.

The only way to counter generations of systemic racism is to educate, she said, after praising the large crowd who joined the cause Sunday.

“We’re not murderers,” she said. “We’re not criminals. We’re black .... the color of our skin doesn’t define who we are.”

They worked with the Somerset police department to plan their march from the police station to the Somerset County Courthouse a few blocks away.

Somerset police officers on motorcycles guided the way as the marchers reached the courthouse – and as a second group booed or chanted “All lives matter” as they passed.

For the most part, the second group stayed within its own corner of the courthouse property. Many gathered around a statue honoring Pennsylvania’s 142nd Infantry during the Civil War, which helped defeat the Confederacy and end slavery more than 150 years ago.

Some of the counterprotesters carried signs that criticized the “Black Lives Matter” movement. Some carried pro-life or pro-Trump signs, standing silently and raising them into the air.

One carried a sign that read, “My life matters,” while others had handguns on their hips.

“What about us? And what about the 89 cops who died last year?” asked Richard Menser, of Somerset.

Menser said he was working at a hospital in southern California during the Los Angeles riots of the early 1990s and saw the city ransacked into a “living hell.”

Menser said he showed up Sunday, in part, because he didn’t want to see that happen in Somerset.

At the other side of the courthouse property, Somerset resident Laura Bowers said that counterprotesters “bought into a racist lie” that black people are dangerous and that Sunday’s march would bring violence – even though organizers pledged to walk in peace.

One counterprotester who identified herself as “Rose” hollered: “White lives matter, too.”

She accused the primary group of spreading lies. After yelling profanities, the woman was escorted away from the crowd to another corner of the property.

‘Still have work to do’

Most of the people in both crowds were white.

At the podium, two pastors reminded both sides that everyone – regardless of their opinions – was made “in God’s image.”

The Rev. Matthew Deal, from St. Paul’s United Church of Christ in Somerset, said it’s easy to sit back and say, “All lives matter.”

Another invitee, Bishop Joseph McGauley, of Jefferson Memorial First Born Church in Prospect, told the crowd that God has a way of answering everyone’s prayers – no matter what brings them together.

“All of this racism has to stop, man,” he said, gesturing to Joe Tunstall, of Somerset, who was leaning against a courthouse column alone with an “All lives matter” sign.

“Yes, black lives matter,” McGauley said. “But I recognize my brother here – his life matters, too.

“Love your neighbor as you love yourself ... means when I see you, I love you and respect you,” he said. “And when my back is turned, you love and respect me, too.”

In a rare moment of unity between the two groups, Tunstall lowered his sign, reached over and embraced McGauley as the pastor finished his speech and started descending the stairway toward East Union Street.

McGauley praised the unity rally’s young organizers for their movement and their message.

“Let’s give these young people a hand,” he said, to the older members in the audience. “It’s the older generation that’s holding the grudges. We’re the ones who gotta get our acts together.”

He said members of both groups informed his department of their intentions to rally Sunday.

“In the end, what we were looking at was Somerset countians occupying the same place and the same time, exercising their Constitutional rights ... only with differing views,” he said.

“And for the most part, they were respectful of each other. In the end, that’s all you can really ask for.”