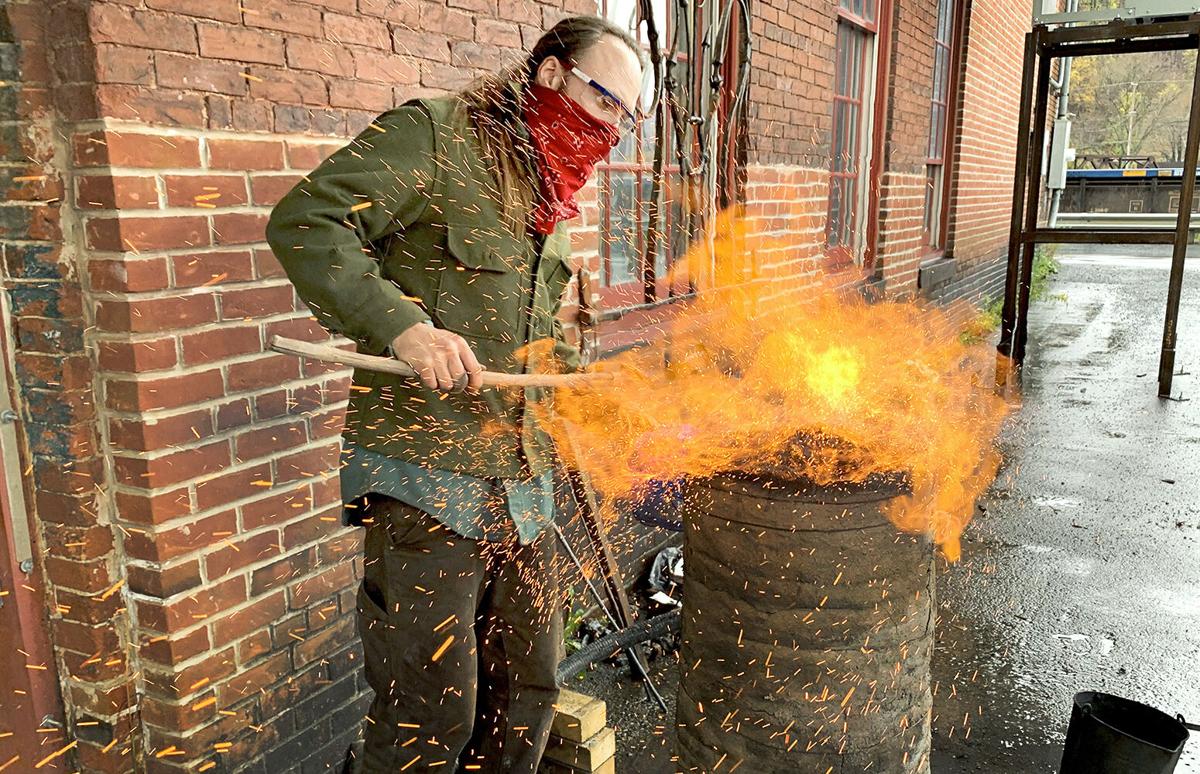 Nick Tomlin, a student at the Center for Metal Arts in Johnstown from Rhode Island, adds iron ore to the fire. 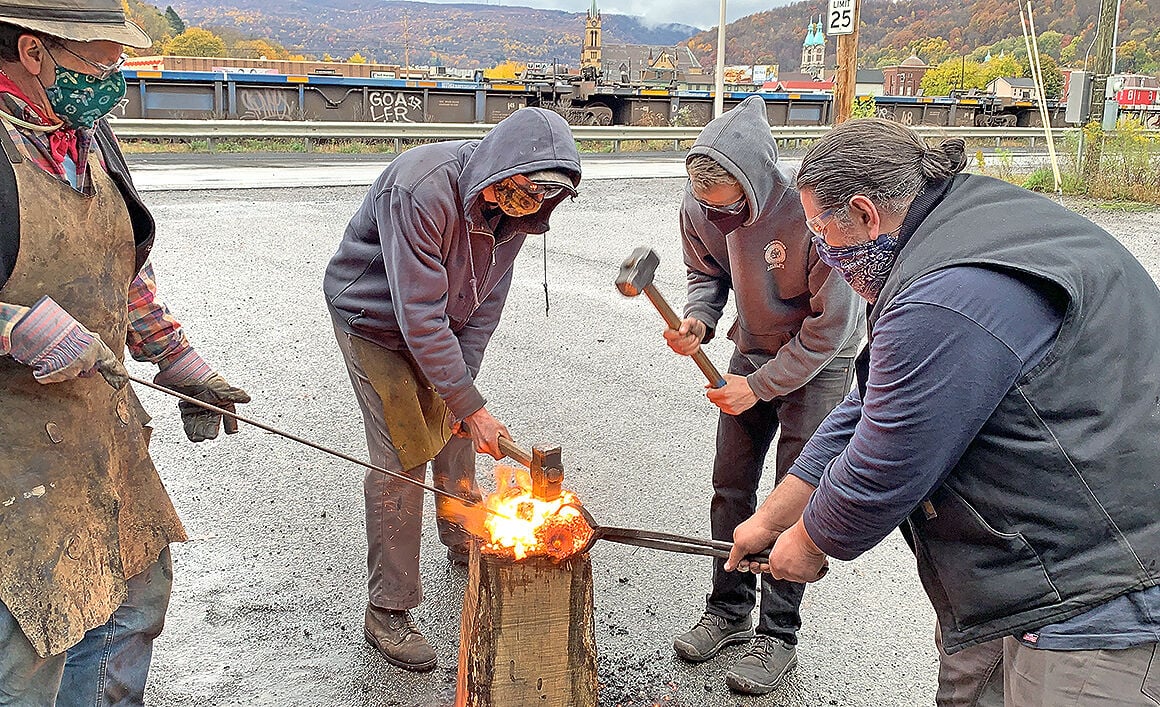 Nick Tomlin, a student at the Center for Metal Arts in Johnstown from Rhode Island, adds iron ore to the fire.

Seven blacksmiths worked together to crack open the base of a three-foot-tall, handmade clay furnace and carefully extricate a glowing orange iron bloom, weighing about 15 pounds, on Friday afternoon.

It was believed to be the first iron professionally smelted at the former Cambria Iron Works and Bethlehem Steel property on Iron Street, using ore harvested from within the city, since the 19th century, according to Johnstown Area Heritage Association President Richard Burkert.

Out of the fire, the crew took the metal to a wooden stump and tapped the exterior a few times to test its forgeability and knock off impurities before rushing it to an industrial hammer inside the Center for Metal Arts classroom, which is located on the historic grounds.

“This is the first time in 150 years that iron has been made using local Johnstown ore,” Burkert said. “That’s why the Cambria Iron Works came here in the 1850s is there was an immense deposit, three layers of iron ore on Prospect Hill that was being mined. It was particularly hard iron, and they were making railroad rails here, and so this was perfect.

“It was tough and it would last a long time. And before they figured out how to make large qualities of steel, hard iron was perfect. Again, though, later, in the 1870s, they quit using local iron ore because it didn’t lend itself to the Bessemer process, the new method for making steel.”

An earlier attempt at making iron from only Johnstown ore proved unsuccessful.

So, for the second try, the local ore was mixed with ore from Virginia that instructor Lee Sauder brought from his home state to use in the weeklong bloomery smelting class.

“The process is kind of mysterious,” said Nick Tomlin, a student in the class from Rhode Island. “You hope that you’re going to get iron at the end of it, but along the way all kinds of things can happen. You have to sort of let go of your expectations a little bit. Sometimes you get what you want. Sometimes you get a total failure. And sometimes it’s really something completely new. Today, we’re dealing with uncharted territory – Johnstown ore that we don’t know very well, we don’t know at all.”

Tomlin continued: “This ore is so rich that we didn’t get some of the byproduct that we were hoping that would help clear out the impurities. So we added the Virginia ore, which is not as rich as the Johnstown ore, in the second smelt. The Virginia ore helped balance out the chemistry inside the furnace we think.”

Sauder, the Center for Metal Arts’ Dan Neville and Patrick Quinn, and Tomlin, along with three other students – Mike Moore, from Oklahoma; Tsvetomir Naydenov, a Bulgarian immigrant living in Maryland; and Eric Dennis, from Vermont – tended to the furnace for about five hours.

Iron ore, hardwood lump charcoal and heat in the 2,375-to-2,450-degree Fahrenheit range all worked together to separate the metal from the slag.

“Iron on the surface of the Earth is all iron oxide,” Sauder said. “It’s all combined with oxygen, and so it’s not as simple as just melting the iron-bearing rock. We need to remove the oxygen from it. The way we do that is to bring it up to a high temperature and expose it to carbon, and that steals the oxygen away. That’s very hot, and there’s a lot of carbon monoxide inside. And, just as in your body, carbon monoxide would steal all the oxygen from your blood and kill you, it’s doing that same process to the iron ore. So it leaves metallic iron behind.”

Sauder, a self-employed blacksmith who has taught in the British Isles, Middle East and Africa, has spent decades studying the technique that was used in the Iron Age nearly 3,000 years ago.

He was inspired to learn smelting in order to better connect with the material used in his trade.

“If you eat meat, you should kill something, and slaughter it and eat it one time, just so you appreciate the gift that it is,” Sauder said. “So I started to do it, and I realized that nobody knew how to do it really. So I just got kind of possessed trying to figure it out. That was 20 years ago. So it’s kind of become my windmill.”

“You can’t let something like this die,” Quinn said. “It’s really important to really be in touch with how iron used to be made at the beginning of the Iron Age.”

Sauder, Quinn, Neville and the students collected the local ore earlier in the week.

“Dan and I have done a lot of exploring over the three years we’ve been here, so we found spots that had piles of ore, and we kind of knew where old ore yards were and blast furnaces from the Cambria Iron Co. and Bethlehem Steel, so we knew approximately where to look,” Quinn said. “We had good luck in finding some in those spots.”

Quinn said the iron created by the process was good for artistic use.

“Most of the students here, including the instructor, are sculptors,” Quinn said. “So the thing about this iron that they’re creating is it’s really malleable.

“You can really use it as an additive process to create sculpture, a lot like clay.”

The experience of smelting the ore also connected the blacksmiths to Johnstown’s rich iron and steel traditions.

“We had the opportunity to explore the hills of Johnstown and find local ore,” Neville said. “And then, through Lee’s expertise, get the chance to build these furnaces and make iron. It’s been really exciting for a lot of reasons. It’s just a really big part of Johnstown’s history.

“It’s really fun to be able to show the community what that history is.”