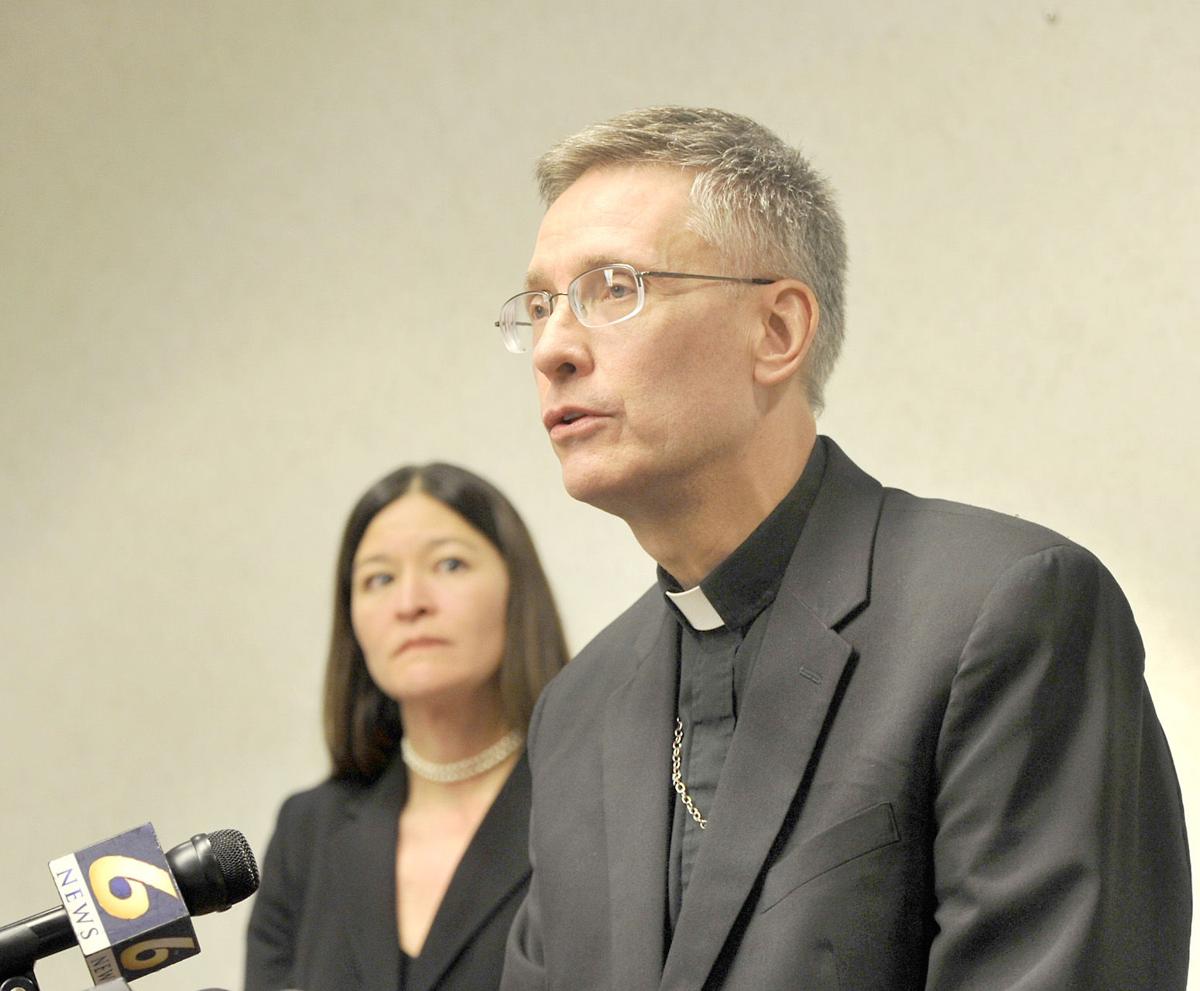 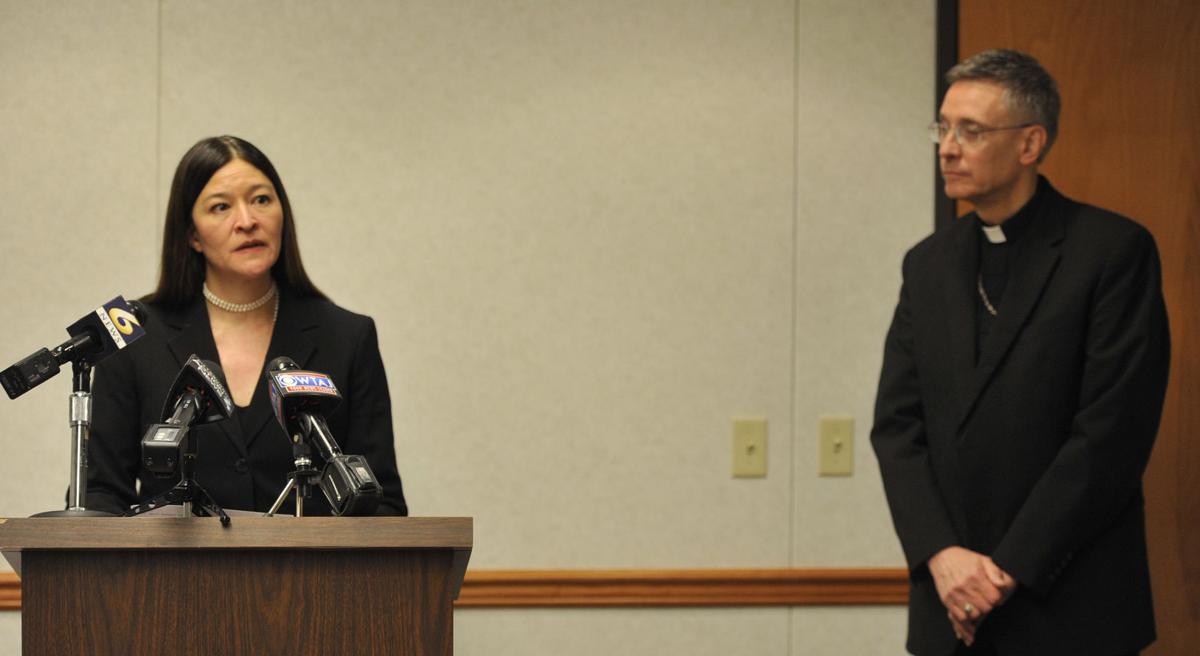 Soo C. Song, acting U.S. Attorney for the Western District of Pennsylvania, (left), announces a memorandum of understanding between The Diocese of Altoona-Johnstown and her office regarding the protection of children as Bishop Mark L. Bartchak listens on Monday, March 6, 2017.

Soo C. Song, acting U.S. Attorney for the Western District of Pennsylvania, (left), announces a memorandum of understanding between The Diocese of Altoona-Johnstown and her office regarding the protection of children as Bishop Mark L. Bartchak listens on Monday, March 6, 2017.

A multistep reform plan was developed by the diocese and federal prosecutors – with that program to be supervised and evaluated by an independent, five-member “oversight board” that will include a social worker, a retired law enforcement officer and a sex-abuse survivor, Acting U.S. Attorney Soo C. Song announced during a joint press conference.

“This agreement puts victims first, providing them with access to needed support and counseling ... and provides for public reporting and transparency,” Song said at the U.S. Attorney’s Office for the Western District of Pennsylvania in downtown Johnstown.

Members of the newly formed local Survivors Network of those Abused by Priests chapter gathered outside the Roman Catholic Diocese of Altoona-Johnstown on Wednesday, marking the one-year anniversary of a grand jury report that exposed an alleged decades-long coverup of child sexual abuse within the area Church.

The announcement was made nearly a year to the day after state prosecutors shed new light on decades of abuse within the Altoona-Johnstown diocese, detailing allegations against at least 50 priests and Catholic religious leaders that, in most cases, were allegedly covered up for decades under previous bishops.

Song said Monday’s agreement is not court-enforced or -ordered, but represents a new day in the diocese regardless, promising “unprecedented” changes to protect the region’s children from future abuse, while providing support to those who are preyed upon.

“This memorandum of understanding represents a clear, definitive break from the past,” Song said.

Bartchak said an outside group that includes a local attorney, a former state trooper and an Orthodox clergyman will review allegations of sexual misconduct within the diocese – a process that for decades was conducted by Catholic priests and other diocesan leaders.

“As we look to the future, I believe these comprehensive and unprecedented reforms will make the diocese of Altoona-Johnstown a leader in the safety and protection of young people,” Bartchak said.

Through a memorandum of understanding, the diocese and U.S. Attorney’s Office agreed on the following moves:

• The diocese would apparently tighten existing reporting protocol. Suspected offenders shall immediately be removed from all contact with children when allegations are made. Sex-abuse claims must be reported to law enforcement officials within 12 hours of the initial report.

• An independent, multidisciplinary oversight board for youth protection is being created by the diocese to evaluate efforts and policies being implemented – including their enforcement. The five-member board will recommend changes, when deemed necessary, and issue annual compliance reports that will be available for public inspection.

• Computer and internet usage by diocesan personnel will be periodically reviewed.

• Abuse victims will be provided independent mental health counseling and other support services from professionals they choose – and the diocese will cover the cost.

A Georgia-based youth protection expert, R. Leslie Nichols, of R.L. Nichols & Associates, spent the past year working with the diocese to develop the child sexual-abuse protection program. He reviewed diocese policies, interviewed priests and other diocese staff and surveyed facilities before presenting his recommendations, Bartchak said.

A longtime safety expert with the Boys and Girls Club of America and a consultant for the U.S. Attorney’s Office, Nichols will stay involved as the diocese continues implementing its plan. He will design and help implement comprehensive training and monitoring programs for diocese personnel, Song said.

What began as a “public pledge” to strengthen the Altoona-Johnstown diocese’s commitment to protect children and youth now includes a framework that relies on outside support.

The diocese’s allegation Review Board – a requirement since 2002 by the national Catholic Church – will be replaced by an all-new group that will include a Lutheran psychologist and a married orthodox priest with experience in youth ministry, among others, Bartchak said.

Song credited Bartchak with working as a willing partner to make sweeping changes – ones that includes a pledge of “openness.”

She said the diocese’s steps can serve as a model for others to follow.

Bartchak said the diocese’s commitments “will be public – and they will be honored.”

“By putting this all out in public, we cannot possibly shirk from what we’re committing to,” he said. “And we won’t.”

Other steps will include the development of an abuse hotline, with calls handled 24 hours a day by Nulton Diagnostic and Treatment Center.

An executive director for youth protection will be hired by the diocese to manage and monitor the abuse protection efforts.

Jones called for Bartchak to fire priests named in the grand jury report, and noted that the diocese had posted identities of 28 offenders while more than 50 were named through the state investigation.

The diocese list provides "no other information helpful to victims and to the public, such as photos, work histories, and current locations," Jones said in a press release.

"We ask that people judge the success of this plan by its actions and not by the words. Actions protect kids not words."

For decades, the Roman Catholic Diocese of Altoona-Johnstown allegedly perpetrated a coverup…

Several individuals who deal with the issue of child sexual abuse have said the Pennsylvania Office of Attorney General is investigating the statewide Catholic Church.

ALTOONA – Hundreds of children were molested, raped and suffered psychological trauma by abu…

At least 50 different priests or religious leaders from the Roman Catholic Diocese of Altoona–Johnstown – some dead, some still living – have been accused of sexually abusing hundreds of children in a grand jury report released by Pennsylvania Attorney General Kathleen Kane on Tuesday.

Three of the area’s leading advocates for victims of sexual abuse perpetrated by Catholic Church priests and other religious leaders had mixed reactions to a plan to protect children unveiled by Roman Catholic Diocese of Altoona-Johnstown Bishop Mark Bartchak and acting U.S. Attorney Soo C. Song on Monday.

Helping victims interact with those closest to them – in order to create stronger relationships – is part of the mission being carried out by the newly formed Survivors Network of those Abused by Priests that was founded by John Nesbella and Thomas Venditti.

The Roman Catholic Diocese of Altoona-Johnstown this past week pledged to tighten guidelines for dealing with priests accused of sexual abuse, and to have an outside committee provide oversight for the welfare of children.

Victim Services Inc. has experienced approximately a 200 percent increase in the number of adult male survivors of childhood sexual assault seeking help within the past year.

The Roman Catholic Diocese of Altoona-Johnstown is overhauling the Diocesan Review Board initially established 15 years ago to help internally investigate abuse allegations.