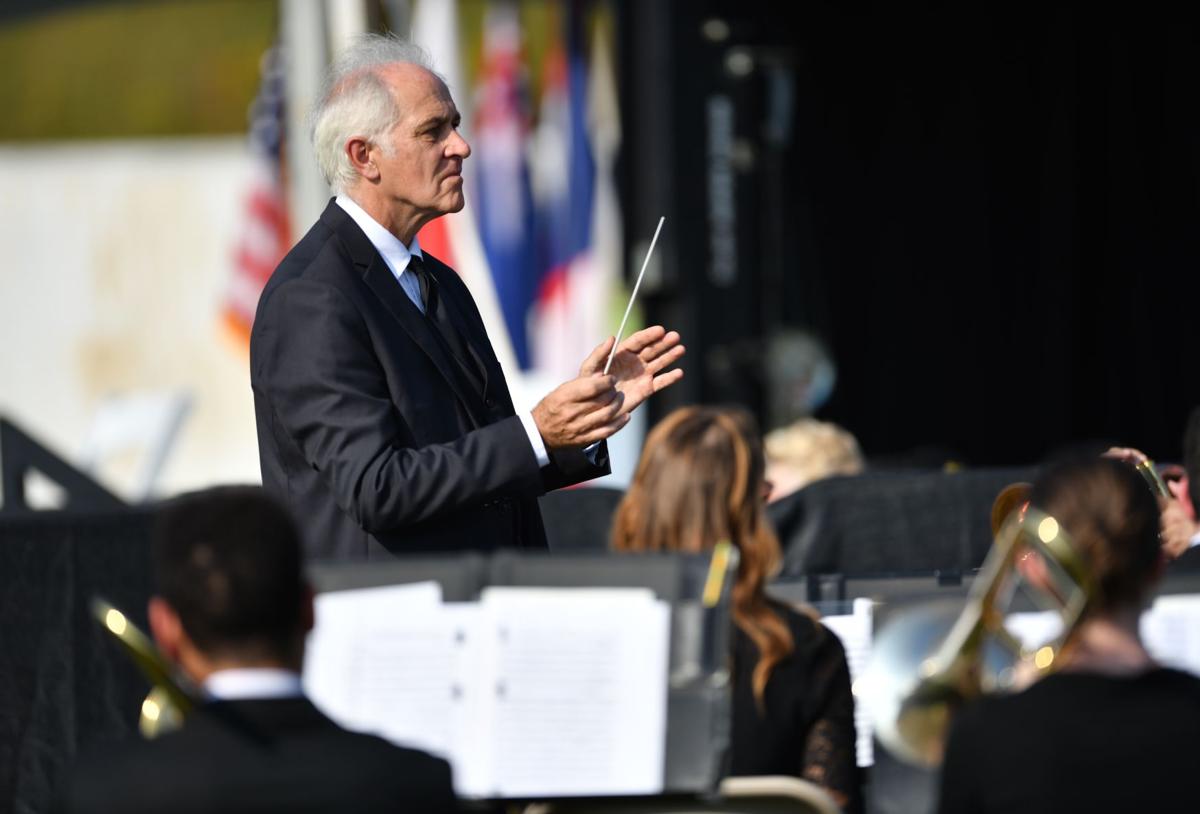 That comment was music to the ears of the band’s director, James Gourlay, who guided his musicians through a series of powerful arrangements, providing a fitting backdrop for a day of tributes to the heroes of Flight 93.

“We chose music that was of a solemn, somber nature – but at the same time uplifting,” Gourlay said after the ceremony.

The music was chosen, Gourlay said, to be “very uplifting, not loud at all. Soft. Pensive, so that people could reflect on the sacrifice that these heroes have made on our behalf.”

Music is always a special feature of anniversary gatherings at the Flight 93 National Memorial.

Sarah McLachlan’s appearance in 2011 was especially noteworthy. Sitting alone at a piano, the popular singer/songwriter performed her hits “In The Arms Of The Angel” and “I Will Remember You,” which took on renewed significance when honoring the 40 passengers and crew of United Airlines Flight 93.

On Wednesday, the group provided a soundtrack to speeches by Vice President Mike Pence and others, and the placing of wreaths at the Flight 93 crash site.

“I think music makes it,” Gourlay said. “Music has the power to make one think, to meditate, but to be uplifted.

“Without the music I think that this would be a poorer event.”

As his Johnstown Symphony Orchestra was preparing to play the movie themes of composer John Williams in 2017, Maestro James Blachly noted that every movement on the screen is enhanced by the music behind the visuals – with the notes evoking sadness, fear, joy, anticipation.

“Every composer who writes for film has a unique way of communicating something emotionally significant about the film through their music,” Blachly said then.

A Williams piece – “Hymn To The Fallen,” from the movie “Saving Private Ryan” – was featured among the River City Brass selections.

Gourlay called the song “so evocative, particularly with the little trumpets. And, of course, it’s a hymn to our fallen here, the heroes of Flight 93.”

“This is a piece that Edvard Grieg held very closely to his heart,” Gourlay said, “a very lyrical, beautiful piece.”

The River City Brass director is a native of Scotland.

He said leading the band in the playing of the national anthem near the place where Flight 93 crashed down – after those on board confronted their hijackers on Sept. 11, 2001, a day of terror and tragedy – was a deeply personal experience.

“I can say ‘our,’ because I’m an American citizen myself now.”