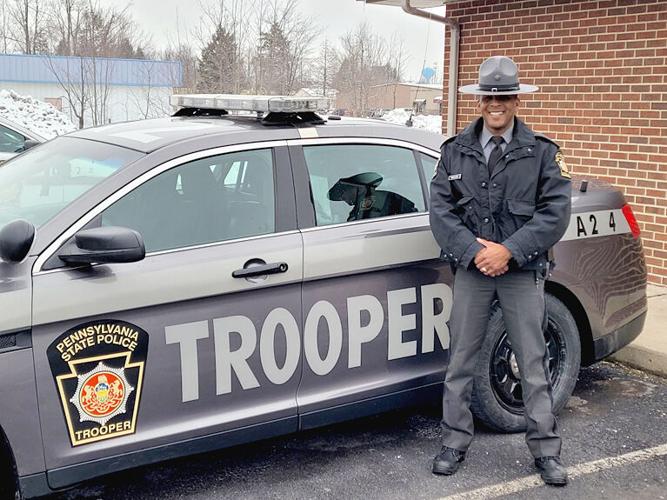 Finding minorities interested in becoming police officers is challenging – and more so after the release of the shocking video showing the death of George Floyd, a Black man, under the knee of a Minnesota officer.

Cameron Ferguson, a Black state trooper at the Ebensburg barracks, said the police handling of the Floyd arrest last May was “really saddening.”

Ferguson, a 2001 graduate of Conemaugh Valley High School, said: “The whole thing is emotional because what that officer did was completely wrong, in my opinion.”

Floyd, 46, was killed on May 25 in Minneapolis, while being arrested for allegedly using a counterfeit bill. The world reacted to the video and photographs of Derek Chauvin, a white officer, kneeling on Floyd’s neck. Floyd died at the scene after telling officers that he could not breathe – his last words caught on video.

“Putting the knee on the neck was very disturbing,” Ferguson said. “We don’t do any training like that. Absolutely not. Any good police officer or trooper, I think, would agree with that.”

Ferguson said his family remains “100%” supportive of his career, but others in the Black community have expressed a different view.

“Some are understanding about what I’m doing as a police officer,” Ferguson said. “But there are times when they’re saying that I’m being an ‘Uncle Tom’ or a government slave.”

Ferguson, who was raised in Mineral Point, served four years’ active duty in the U.S. Marine Corps. He was a corrections officer at State Correctional Institution at Houtzdale in Clearfield County and at SCI-Laurel Highlands in Somerset County.

He became a state trooper after graduating from the Pennsylvania State Police Academy in Hershey.

“Growing up, I would see my father’s military photos, and I thought, ‘That’s really cool,’ ” Ferguson said. “He was always helping people, serving the country.”

Ferguson said he has mixed feelings when observing the actions of the Black Lives Matter movement.

“That’s an emotional roller coaster, honestly, because I understand why they’re there,” he said.

“I’m all about if you want to protest, that’s fine, but the minute you start vandalizing buildings and people are getting hurt or you’re blocking traffic, that’s when it becomes an issue.”

‘Talk to the children’

Why is it so difficult for law enforcement to recruit minorities?

“I just think when you watch the TV shows, they’re mostly white officers,” Ferguson said. “In our area, there aren’t too many Black officers.

“It might change their mindset if they see Trooper Ferguson saying ‘hi’ to the kids or playing basketball. The key for me is to lead by example in everyday human things.”

Children are sometimes taught to fear the police, he said. Ferguson said he sees that often.

“When a family approaches me, they say to their kids, ‘There’s Trooper Ferguson. If you’re bad, he’s going to arrest you,’ ” he said. “That drives me nuts because it gives them the idea that I’m only here to take people away.”

Communicating with children can ease their fears, the trooper said.

“I get down on one knee so I’m eye level with the kid and I introduce myself,” Ferguson said.

“I tell them that, ‘I’m not here to take you to jail. I’m here to help you, your mom, your dad. When you see a police officer, you go to them for help.’ I try to change the whole dynamic.”

He believes the end of racism begins with dialog.

“People go way far off to the left or the right,” Ferguson said. “If you disagree, that’s when you need to talk.

“I want to take time to talk to people when I’m out on patrol,” he said. “I’m here to lead by example. That’s why I’m happy to share my story.”

“It’s 2021,” he said. “It’s important to have faces in the ranks that reflect the community we serve.”

WATCH VIDEO | Part of our history: For Rayne’s proprietor, barbecue a way to share traditions, connect

Terrance Ballard’s barbecue restaurants are the results of a decades-old dream – and many generations of family traditions.