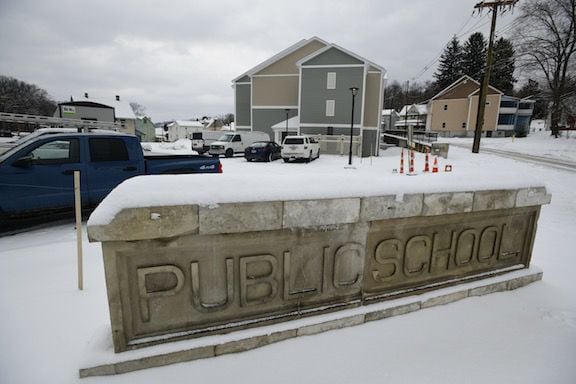 A sign at Roxbury Place, shown on Jan. 29, 2019, marks the site of the former Roxbury School in Johnstown. The blighted structure was torn down to make way for the 43-unit apartment complex, the first new development of its size within the city in decades 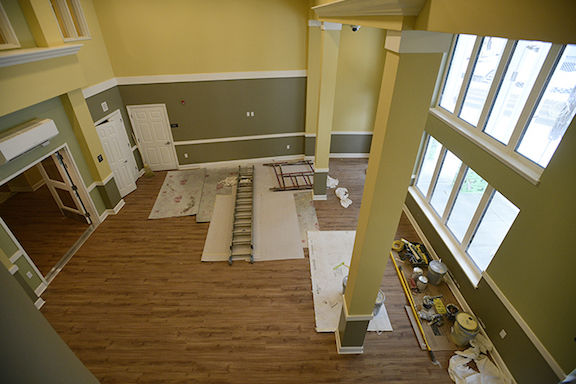 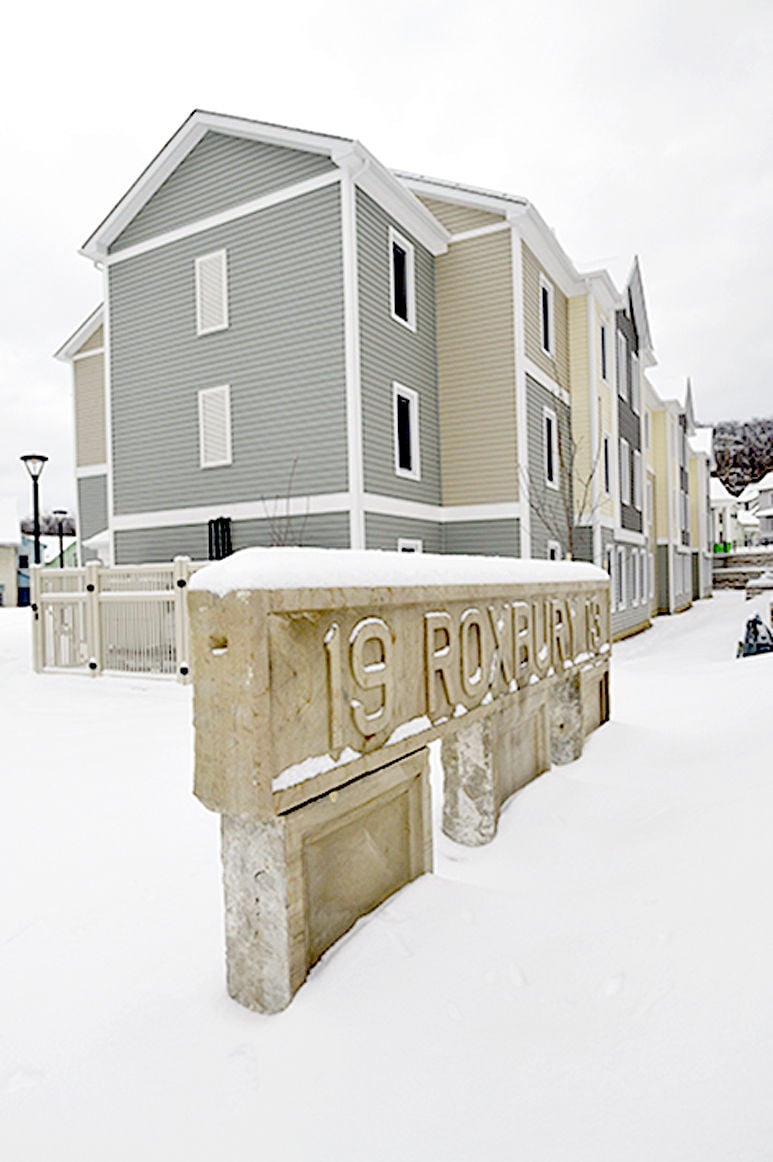 Roxbury Place in Johnstown is shown on Jan. 29, 2019. The 43-unit apartment complex is the first new development of its size within the city in decades 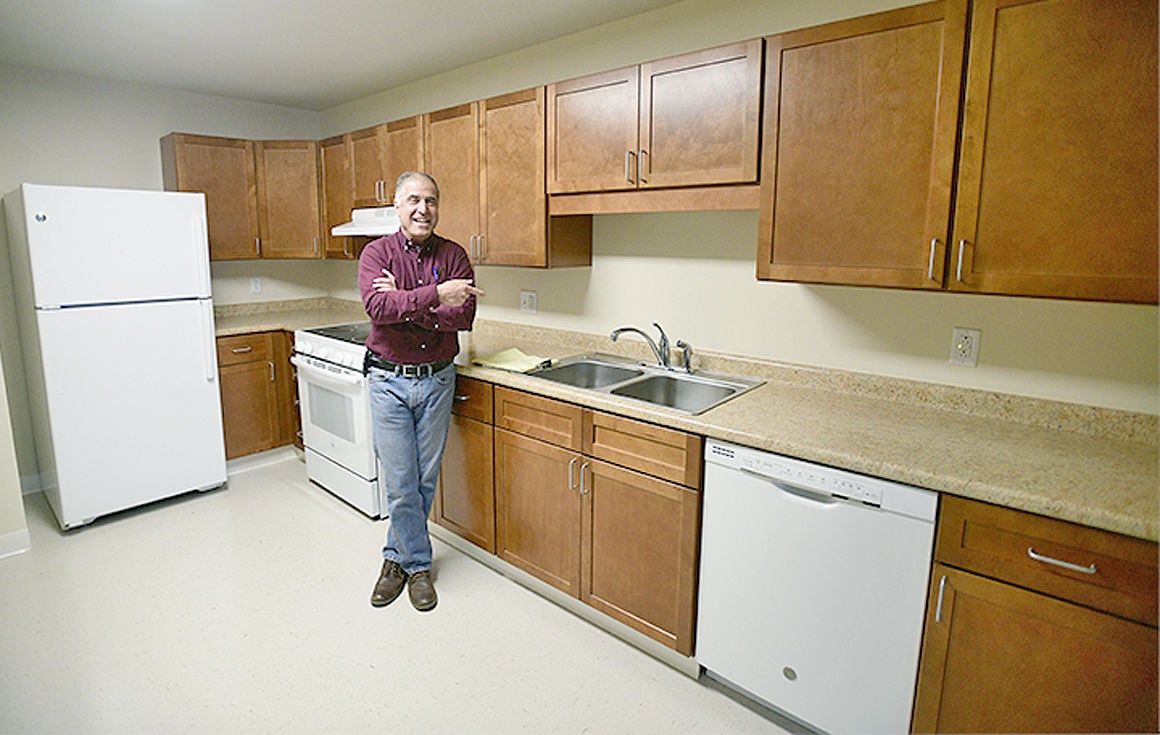 Dave Topian, vice president of construction for Buckeye Community Hope Foundation, shows off the kitchen inside a one-bedroom apartment at Roxbury Place on Jan. 29, 2019. 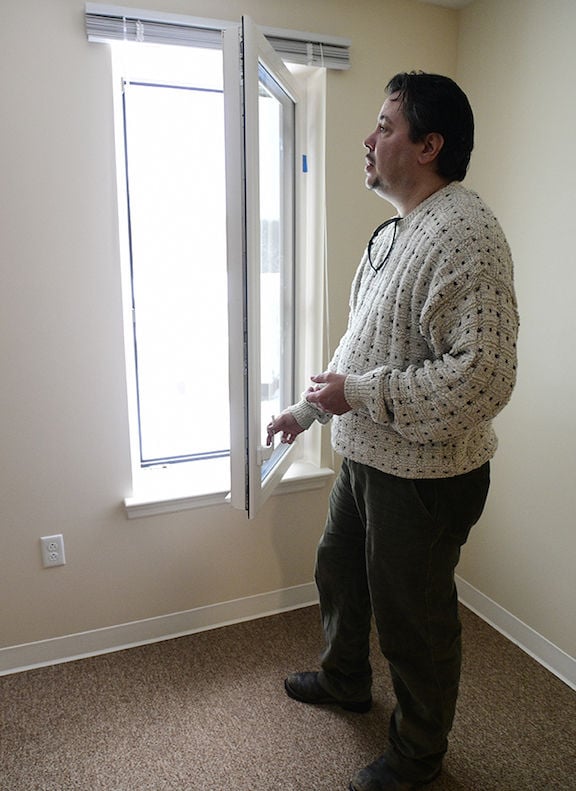 John Shaffer, of Up Street Architecture of Johnstown, shows off an energy-efficient window at Roxbury Place in Johnstown on Jan. 29, 2019. 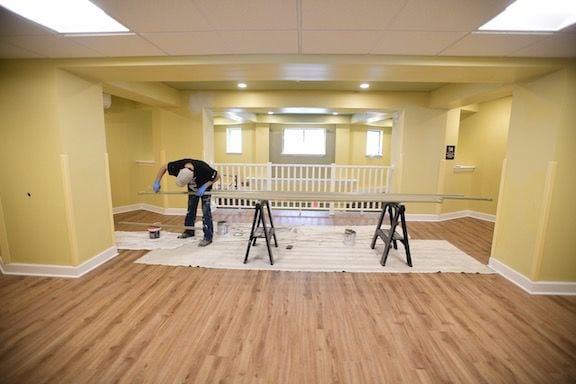 Jeff Wise, of R.F. Contracting in Uniontown, applies sealant to a railing before installing it at Roxbury Place in Johnstown on Jan. 29, 2019.

But now that sign serves as a gateway to a modern apartment building.

Featuring 43 units, Roxbury Place is the first new development of its size within the city in decades – and also the most energy-efficient housing project, planners said.

For income-eligible residents ages 55 and older, there is no other housing option like Roxbury Place in the region, according to officials with its owner and operator, the Buckeye Community Hope Foundation.

“The idea was to provide all of the modern conveniences they will need here ... inside a space that’s so efficient that their energy bill will be as close to zero as possible – if not zero,” said Dave Topian, who serves as vice president of construction for the Ohio-based nonprofit.

Dave Topian, vice president of construction for Buckeye Community Hope Foundation, shows off the kitchen inside a one-bedroom apartment at Rox…

Triple-pane windows built in Ireland – “the most efficient you can find” – were installed while wall panels were being assembled to keep the spaces airtight, according to Tom Woodward, the project superintendent for Mistick Construction, the Pittsburgh-area construction company that built the complex.

John Shaffer, of Up Street Architecture of Johnstown, shows off an energy-efficient window at Roxbury Place in Johnstown on Jan. 29, 2019.

Water is provided through a recirculating system designed to quickly – and cheaply – deliver hot water on-demand.

Other offerings inside the building have convenience in mind, he said.

A wellness area was added for medical and social services professionals, among others, to make on-site visits when needed.

A central gathering space with a full kitchen was added for parties, dinners – and perhaps theme events – to give tenants a chance to get together and relax, UpStreet Architects project manager John B Shaffer Jr. said.

“There’s going to be a large-screen TV in here. This could be their hub ... for Steeler games and neighborhood dinners,” Shaffer said. “When someone’s grandchildren come by for a visit, this is where they can hang out.”

Once the space is occupant-ready, it’ll be decorated by images of Roxbury’s past – including framed photographs of the onetime Luna Park and the former Roxbury School, Buckeye’s Pat Torrence said.

Developers worked with the Johnstown Area Heritage Association to identify and highlight some of the neighborhood’s history.

Inside the apartments, units are fully furnished with high-efficiency dishwashers and other kitchen necessities.

Walk-in showers with seating were installed in all main bathrooms.

Emergency pull-cords were installed in bedrooms to contact a 24-7 monitoring agency – to connect with police, fire or medical support, Topian said.

Jeff Wise, of R.F. Contracting in Uniontown, applies sealant to a railing before installing it at Roxbury Place in Johnstown on Jan. 29, 2019.

Bedrooms inside the spaces are approximately 160 square feet, he said.

For decades it served as a neighborhood hub for generations of students, including Roxbury resident Nancy Mishler.

Roxbury Place in Johnstown is shown on Jan. 29, 2019. The 43-unit apartment complex is the first new development of its size within the city i…

Mishler has fond memories of the school but said she wasn’t sorry to see Roxbury Place replace it. Over the past 20 years, the school had become her neighborhood’s biggest blight.

“Aesthetically, it looks beautiful,” she told The Tribune-Democrat in January. “And I think an entrepreneur in the area could put a restaurant or cafe next door and really benefit from it.”

According to 2018 income guidelines, a prospective tenant can earn up to $25,700 to be eligible to live at Roxbury Place or up to $30,840 for a family of two, company officials said.

But the neighborhood will see a “top-notch” development with a modern look designed to meet the highest energy efficiency standards, Boone said.

The three-story apartment building was built to “passive house” specifications that will keep heating and cooling costs low.

Company officials have said sewer, water and gas costs are covered under the monthly rent, which ranges from $503 to $590 for a single-bedroom apartment, depending on income, and $604 to $695 for a two-bedroom, Buckeye Hope Foundation Compliance Director Beverly Patrone said.

In northern Cambria County, funding is still being sought to develop a two-unit townhouse project for income-eligible residents ages 55 and older, planners said.

The Northern Cambria Community Development Corp. is looking for a second source of funding to develop two senior citizen-designated townhouses on the former Miner’s Hospital site in Northern Cambria.

Matt Barczak, the company’s director, said the nonprofit is working with Cambria County Redevelopment Authority to find the remaining funds to support the $500,000 project.

“We have a waiting list for apartments like these, but we can’t get this project off the ground until it’s 100 percent funded,” he said.

When it comes to Cambria County pathways, it’s not just about extending and connecting existing trails.