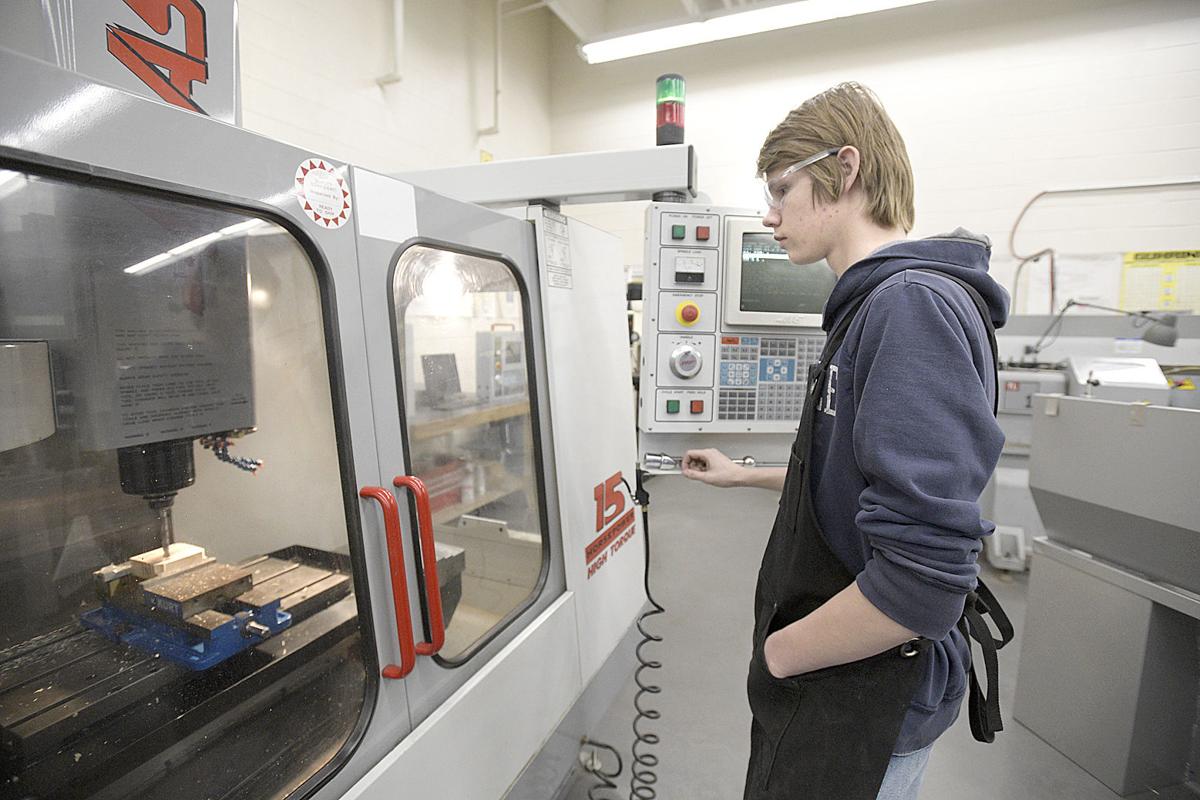 Tanner Thomas, a student from Conemaugh Township School District, runs a milling machine at Greater Johnstown Career and Technology Center on Jan. 25, 2019. Thomas also works at MIC Industries in Elton as a machinist. 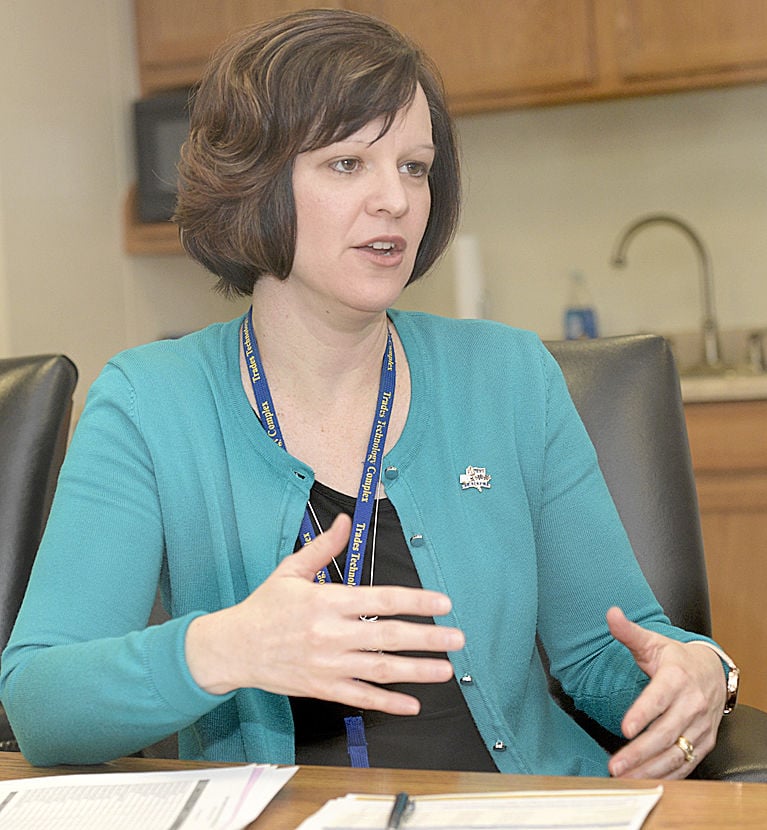 Tricia Rummel, above, supervisor of adult education at Greater Johnstown Career and Technology Center, speaks during an interview on Jan. 25, 2019.

Greater Johnstown Career and Technology Center owns two tractor-trailers. But these days they are rarely parked, unless students are standing outside inspecting them, the school’s administrative director, John Augustine, said.

“Those rigs are on the road every day – 52 weeks a year,” he said. “And a lot of times, it’s young adults just out of high school.”

If the school had more trucks and trainers, that total would be even higher, he said.

“The demand (for drivers) is so strong right now,” Adult Education Supervisor Tricia Rummel said, noting that careers can often mean annual salaries of $40,000 to $80,000.

Vision 2019 | ‘Demand is so strong’: Job opportunities – and options to train for them – on the rise across region

Tricia Rummel, above, supervisor of adult education at Greater Johnstown Career and Technology Center, speaks during an interview on Jan. 25, 2019.

“It’s at the point when a student is ready to finish their program they can pick and choose what they want to do and who they want to work for – whether they want to drive locally or travel cross-country.”

A lot of driving jobs bring sign-on bonuses, too.

Demand-wise, a similar story is playing out with a wide range of other fields the career and technology center offers throughout the year – such as licensed practical nursing, machine tool technology and welding, school officials said.

Greater Johnstown Career and Technology Center’s enrollment has surged 32 percent – from 285 students five years ago to 378 today – and the job market in nearly every field has been strong enough to support it, Augustine said.

“Our enrollment is the highest it’s been in 18 years,” Augustine said. “And the timing is good ... because employers are ringing our phones every day.”

When Johnstown Area Regional Industries launched a training-to-career welding program in 2018, the need was greater than ever, Workforce Development Director Debi Balog said.

The region’s industries had more than 150 job openings – and dozens of them needed to be filled as soon as possible.

But companies were struggling to find enough people to meet their demands.

Through the Neighborhood Assistance Tax Credit’s “Training to Manufacturing” program, 19 people were trained over a six-week period and went straight to work in places such as JWF and Riggs Industries, she said.

Then, a $150,000 Career-to-Training grant was awarded through Gov. Tom Wolf’s Manufacturing Pennsylvania Initiative to provide training for at least 40 more people at the Commonwealth Technical Institute at Hiram G Andrews Center, the Greater Johnstown Career and Technology Center and Somerset County Technology Center.

Dozens of people are currently enrolled in a six-week class that will prepare them to get straight to work.

Thirteen are currently wrapping up a class while another 10 will begin taking classes this month at Commonwealth Technical Institute, Balog said.

All of a sudden, local training facilities are training at capacity – sending out new batches of willing workers every month – and there’s a waiting list of 60 people eager to learn the basics of welding, she added.

It’s a welcome contradiction to the perception that no one wants to work in the region, Balog said.

“Now, we’re on track now to meet the industry’s immediate needs,” Balog said. “And we’ve got a list of people who are eager and waiting to get trained and get to work.”

That doesn’t mean there aren’t more jobs that can’t be filled, she said.

“We’ll train more if we can,” Balog said.

A welder program was also implemented in Bedford County, where 25 workers are receiving more than 700 hours of specialized training with Pleasantville-based Mission Critical.

Earning while they learn

For years, students in the trade programs had to hunt for work after graduation.

Tanner Thomas, 16, is still just a high school junior, but he’s already spending three days a week inside a machine shop, earning $10 an hour while fellow students are taking notes inside classrooms.

“I still have a lot to learn ... but I’m getting to see what a real-world machine shop is like,” Thomas said.

That experience has reinforced his belief that this is something he wants to turn into a career, he said.

“Machining is a tough position to fill,” Stufft said. “It’s hard to find people ... because companies are all fighting from the same (labor) pool.”

He praised Thomas’ motivation and willingness to learn – and said the young man is doing well at the job.

Thomas is the youngest trainee the company has had, Stufft said. But Thomas and a few others working through the Greater Johnstown Career and Technology Center cooperative partnership has Stufft optimistic that the move will be a good one for both sides for the years to come.

Thomas is one of 16 students working for 15 different companies through GJCTC co-ops, Augustine said.

Diesel technology, construction technology and welding students, among others, are working for employers in their fields this year, spending part of their day at work and the other part at school, Augustine said.

“In some of the programs, like machine shop technology, every student eligible for a co-op is working somewhere,” he said. “One of our students is making $12.50 an hour even though he’s still in school.”

Machine shops across the region are turning to the labor pool’s next generation to fill its gaps.

That program has allowed the company to retrain 80 percent of its participants – a valuable accomplishment at a time when the hunt to find trained workers elsewhere “has gotten progressively worse,” Daniel Leiss told The Tribune-Democrat last month.

For students in medical fields, clinical work in hospital or nursing-home settings is part of the routine. Many of those jobs have been in-demand for years – and the growth hasn’t slowed, Rummel said.

After 16 health assistant students finished their training at Richland Healthcare and Rehab Center, every one of them was offered a job, Augustine said.

“If we can get students jobs before they leave – that’s great. We’re excited,” he said. “That’s what we’re here for.”

Within the one-year licensed practical nursing program, 73 students are currently enrolled in seven classes to keep courses offered at a 1-to-10 faculty-to-student ratio.

“Students are averaging $40,000 a year to start, which is amazing ... but we can’t even meet the demand for these jobs,” Augustine said.

Students spend part of the year doing clinical work at the Windber Church of the Brethren, Conemaugh Health System and Cambria Care Center

The 1,600-hour course carries a $15,225 tuition, but financial aid is available and signing bonuses – a common hiring incentive – can also be put toward tuition, Rummel said.

“The demand for practical nurses is so high right now that we have nursing homes asking us to start ‘learn-where-you-earn’ programs inside their facilities,” Augustine said.

Planning for the future

That approach prompted the school to add professional development days to its curricula in recent years to better prepare students to land – and keep – jobs once they have a foot in the door.

“Work ethic is important. We’re seeing there are people out there who want to work but they don’t understand that it’s so important to be reliable – and show up on time,” Augustine said.

There’s also a speed dating-style job interview process to get trainees to focus on their most important assets and skills, he said.

“A lot of things you might think everyone just knows – it’s not all commonsense anymore,” Balog said. “Some people need to learn how to keep a job. But we can help with that now.”

Balog said she’s hopeful there’ll continue to be funding to provide no-cost training to unemployed area residents – and she credited state lawmakers for recognizing the importance of such programs in driving the economy.

The  career and technology center is already looking ahead to develop programs to meet new waves of hiring needs.

Next year, two year-long construction technology programs will be added.

One will be crafted to allow students to pursue careers in carpentry or masonry.

The other will focus on electrical and heating, venting and air conditioning.

“We get calls from places like Eastern Elevator every week, and this is going to prepare people for those types of jobs,” he said. “It’s going to be hands-on learning.”

“With a lot of these jobs, it’s getting really difficult to keep up with the demand now because the pool (of workers) is getting smaller,” Vasilko said. “If you hire someone that means you’re probably taking a guy from somewhere else.”

Vasilko said there’s a serious shortage in the masonry and concrete-finishing fields.

“You’re talking about a job where you could hit the ground running, with masonry,” he said, estimating salaries likely start at $50,000 a year locally.

For someone willing to lift, shovel and put in a hard day’s work, the timing has never been better to earn a good living in the region, Vasilko said.

When marketing pro Emily Korns and her family moved back home to Somerset in 2010, she began working remotely for companies based in big cities many miles away.