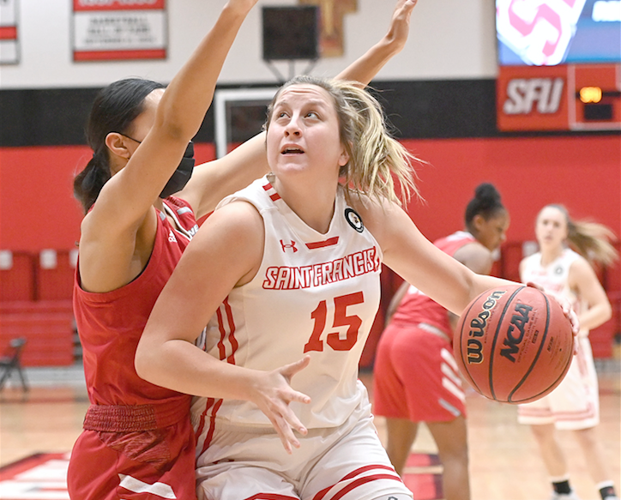 St. Francis senior Haley Thomas (right) tries getting around a Sacred Heart defender on Tuesday, Feb. 23, 2021, during their Northeast Conference game at DeGol Arena in Loretto. 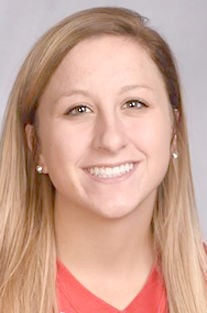 St. Francis senior Haley Thomas (right) tries getting around a Sacred Heart defender on Tuesday, Feb. 23, 2021, during their Northeast Conference game at DeGol Arena in Loretto.

JOHNSTOWN, Pa. –Haley Thomas has been hired as the marketing and events manager for Vision Together 2025, a volunteer organization for community and economic development in the Johnstown region.

Thomas, a Hooversville native, is a 2017 graduate of Bishop McCort Catholic High School. She was a standout basketball player there, having earned honors as the state player of the year.

She was also an all-Northeast Conference player at St. Francis University.

Thomas graduated with honors from St. Francis, and earned a bachelor’s degree in marketing, strategic communications and digital media and a master’s of business administration.

Thomas has worked as a freelance writer and marketing intern for Unique Venues, and she most recently worked for La Torre Communications in Harrisburg as a public relations intern.

While at St. Francis, Thomas received the Armond J. Manfredi Award in Marketing and the James Scarletta Memorial Award for having the highest GPA in the communications program.

Thomas helped to lead the Red Flash to an NEC championship and a NCAA tournament appearance.

“Haley is going to be president one day, that’s how intelligent she is,” Vision Together 2025 president and CEO Mike Tedesco said in a press release.

“We are excited to have her on board. She represents the next generation of leadership in Johnstown.”

St. Francis stifles Duquesne for first victory in series since 2016

Backup quarterback Justin Sliwoski threw a go-ahead, 5-yard touchdown pass to Kahtero Summers after his 61-yard run set up the score early in the fourth quarter and St. Francis rallied to beat Duquesne 17-10 in Northeast Conference play on Saturday.