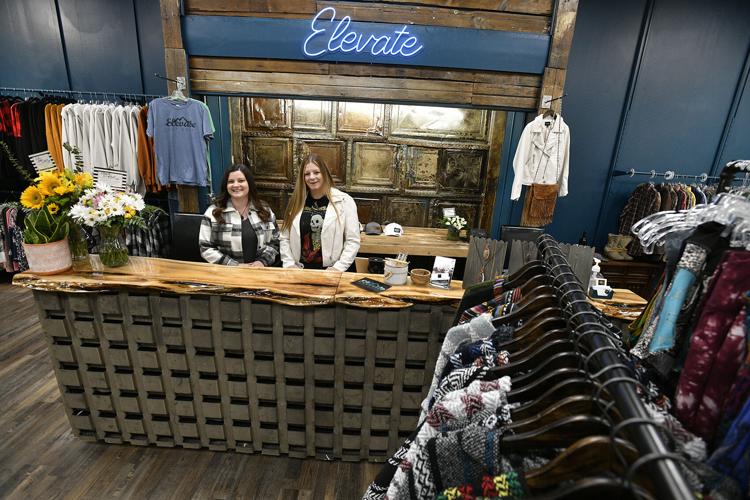 Elevate owners A.J. Eutin (left) and Kristy Hagan pose for a photo inside their new store on Main Street in Johnstown on Friday, Feb. 18, 2022. 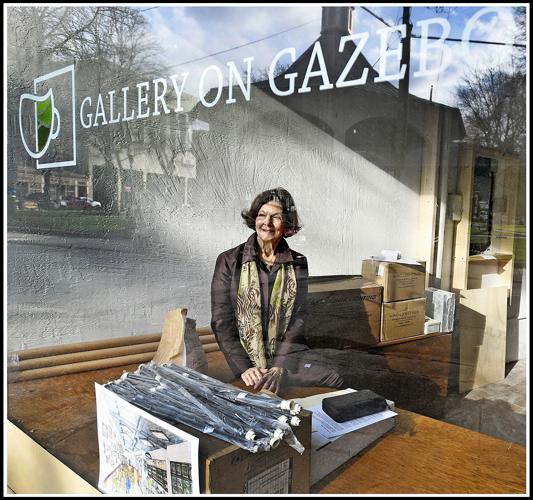 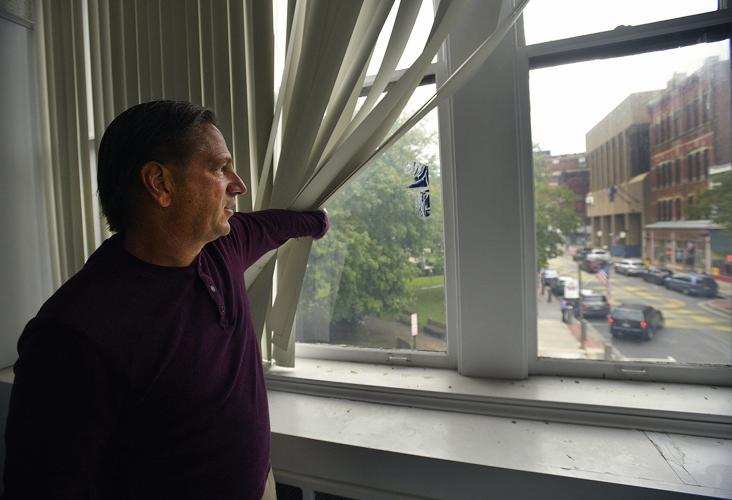 Mike Artim, president of Intrignia Corporation, looks out the window of the Park Building on Main Street in downtown Johnstown, on Monday, Oct. 25, 2021. 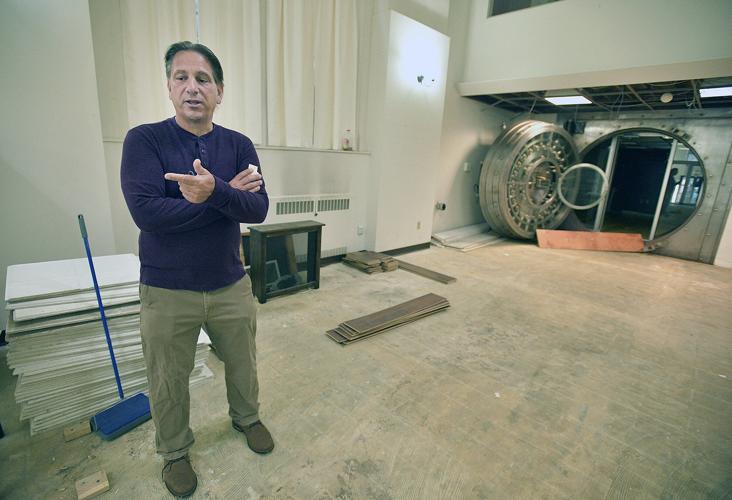 Mike Artim, president of Intrignia Corporation, discusses his restaurant project at the former Vault Salon on Main Street in Johnstown, on Monday, Oct. 25, 2021.

Elevate owners A.J. Eutin (left) and Kristy Hagan pose for a photo inside their new store on Main Street in Johnstown on Friday, Feb. 18, 2022.

Mike Artim, president of Intrignia Corporation, looks out the window of the Park Building on Main Street in downtown Johnstown, on Monday, Oct. 25, 2021.

Mike Artim, president of Intrignia Corporation, discusses his restaurant project at the former Vault Salon on Main Street in Johnstown, on Monday, Oct. 25, 2021.

JOHNSTOWN, Pa. – Elevate, a retail store for new and vintage clothing, has opened at 517 Main St.

It’s one in a round of new businesses slated to launch in downtown Johnstown.

Business partners Kristy Hagan and A.J. Eutin want to be among the first new store owners to participate in a rebirth of downtown.

“We want downtown Johnstown to be our home,” Hagan said. “We looked at opening the store outside of Johnstown just because there is more foot traffic, but we came back here because this is where our heart is.”

“We are doing this business on our own. We got a city grant for signage, but other than that, it’s 100% woman-owned, us-invested.”

The store has brand-name clothing and items from local artisans as well as a “re-love” section of secondhand clothing.

Elevate is also building an e-commerce site so that inventory can be packaged and shipped nationally – or even internationally – from the store’s back room.

However, Hagan said she believes the brick-and-mortar store can stand on its own.

“There are many things coming to this block,” she said. “Our goal is for people to come down, to come shopping, and come and eat here instead of going to Richland or somewhere else.”

Hagan and Eutin are leasing their retail space from Hazak LLC, a real estate holding company that in 2019 invested in four Main Street properties.

In addition to Elevate, Hazak has previously announced plans for opening a Voodoo brew pub at another property, 526 Main St., across from Elevate.

Mike Malcanas, partner in Hazak and Voodoo, has said the brew pub remains a goal, although COVID-related issues have slowed the process.

“We’ve been in close contact with them,” Hagan said. “Their goal is to open; it’s just finding a workforce. You need a general manager working 40 hours a week. That’s hard to find. He said it’s coming. It takes the right key players.”

Hazak also owns the property at 507 Main St., a former Rite Aid, which is currently empty.

Another property at 523 Main St., is in line for structural stabilization, Malcanas said in previous interviews with The Tribune-Democrat.

“I just admire everyone else taking steps in the right direction to forward the city and bring it back to life,” Hagan said. “Everybody wants it. They do. Everyone else who’s taking those steps forward, I feel like I’m partners with them.

“Whether we know each other or not, let’s be resources for each other and move forward together.”

Mike Artim, owner of Balance Restaurant, 415 Main St., has purchased and is renovating several properties on the 400 block of Main Street.

His company, Intrignia, owns buildings from 407 to 430 Main. Plans include a new restaurant, cigar bar, a student-run restaurant space and an innovation center for tech businesses and startups, as well as 10 apartments with views over Central Park.

A short walk north from Balance Restaurant, Kelly Modic, owner of Luxe suites at 518 Washington St., said she has several applicants wanting to move their businesses into her fully furnished, move-in-ready suites for independent beauty, health and wellness professionals.

“We will see what happens sometime in March or April,” she said. “I want it to be the right fit for the building. Hopefully, it turns out well.”

In the middle of downtown, across from Central Park, Gallery on Gazebo is preparing to infuse the city with new arts programs that go beyond the gallery’s walls at 140 Gazebo Place, said Rosemary Pawlow- ski, the gallery’s founding volunteer and director.

“I think downtown is pretty interesting,” she said. “We are looking at more programming that can be outside, in the park.”

The Gallery has also teamed with operators of the State Theater for a Mardi Gras Gala at Asiago’s Tuscan Italian restaurant in Johnstown.

Eric and Amanda Reighard, founders of the Johnstown State Theater LLC, said they are making progress toward permanent ownership of the theater, located inside Conemaugh Health System’s Lee Campus on Main Street.

“We are still in the negotiations process of having the building transferred,” he said.

“Once that happens, then we will be able to move full steam ahead on focusing on renovations.”

In the two years since State Theater LLC was formed, the Reighards have been opening the venue for events, including movies and concerts.

He said the theater has developed a groundswell of public support that will help attract donors, investors and grants to fund the renovation.

“We had a sell-out concert for the ‘Classic Vinyl’ concert in February,” he said. “There was such a high demand that it will be returning in November for a Beatles concert series. In terms of events we use as fundraising efforts, things have been going extremely well.”

With more people downtown in the evenings than in the past, Gallery on Gazebo has changed its hours of operation.

Since it was established in 2018, the gallery’s mission was to create a space where arts conversation and community programming intersect, she said.

“We are in a prime place here,” she said. “We are happy to showcase anything, incorporate anything. I think we could do some great live music here.”

The gallery recently received a grant from the 1889 Foundation for people over age 50 to come to sing twice per month under the instruction of a choral director.

Several art exhibits are planned at the gallery, but Pawlowski said she and the gallery’s board of directors want to showcase more types of art.

“Dancing, hip-hop, all these things are art – art is living,” she said. “Anytime you go the extra mile, when you take things up a notch, you’ve created something along the lines of an art form.”

Pawlowski said the gallery is looking for art that is seamless with activity happening downtown.

“I see kids doing bike tricks in the park, and it’s pretty dangerous, I think, some of the things they do, but maybe they do it for attention,” she said. “If we could talk with them and make it more of an art form – I think people should see what they can do. I mean it’s fantastic. Not my wildest dreams, could I imagine riding on the back wheel of a bicycle.

With the region still recovering from pandemic-driven layoffs and retirements, there may be no better time to pursue training for another career path, said Debra Balog, Johnstown Area Regional Industries' workforce development director.

Do you agree with the legislature's proposal to ban cellphones in schools?