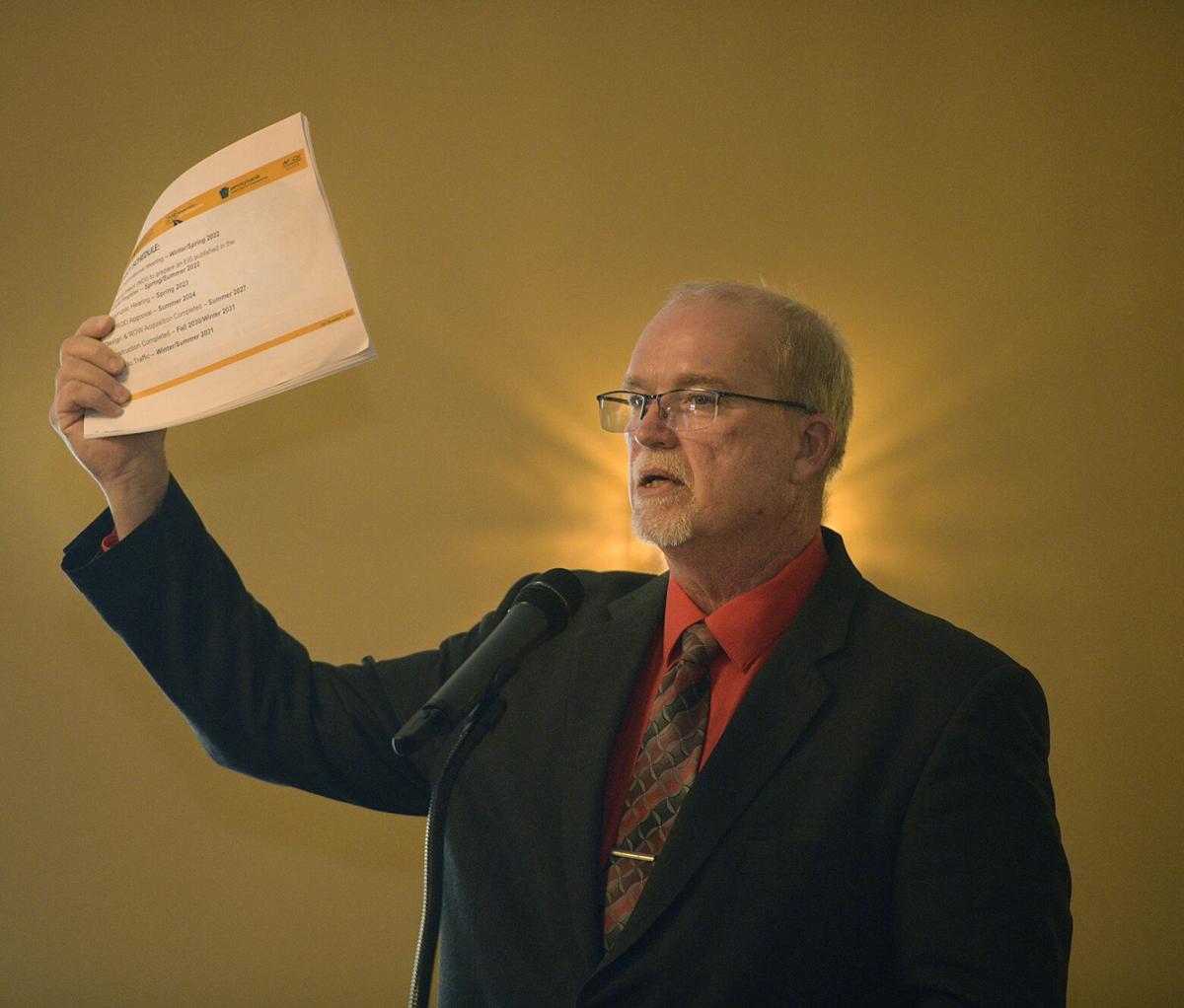 Somerset County President Commissioner Gerald Walker holds up a PennDOT slide presentation on the future of U.S. Route 219 during the Eggs & Issues State of the County event on Thursday, November 18, 2021. 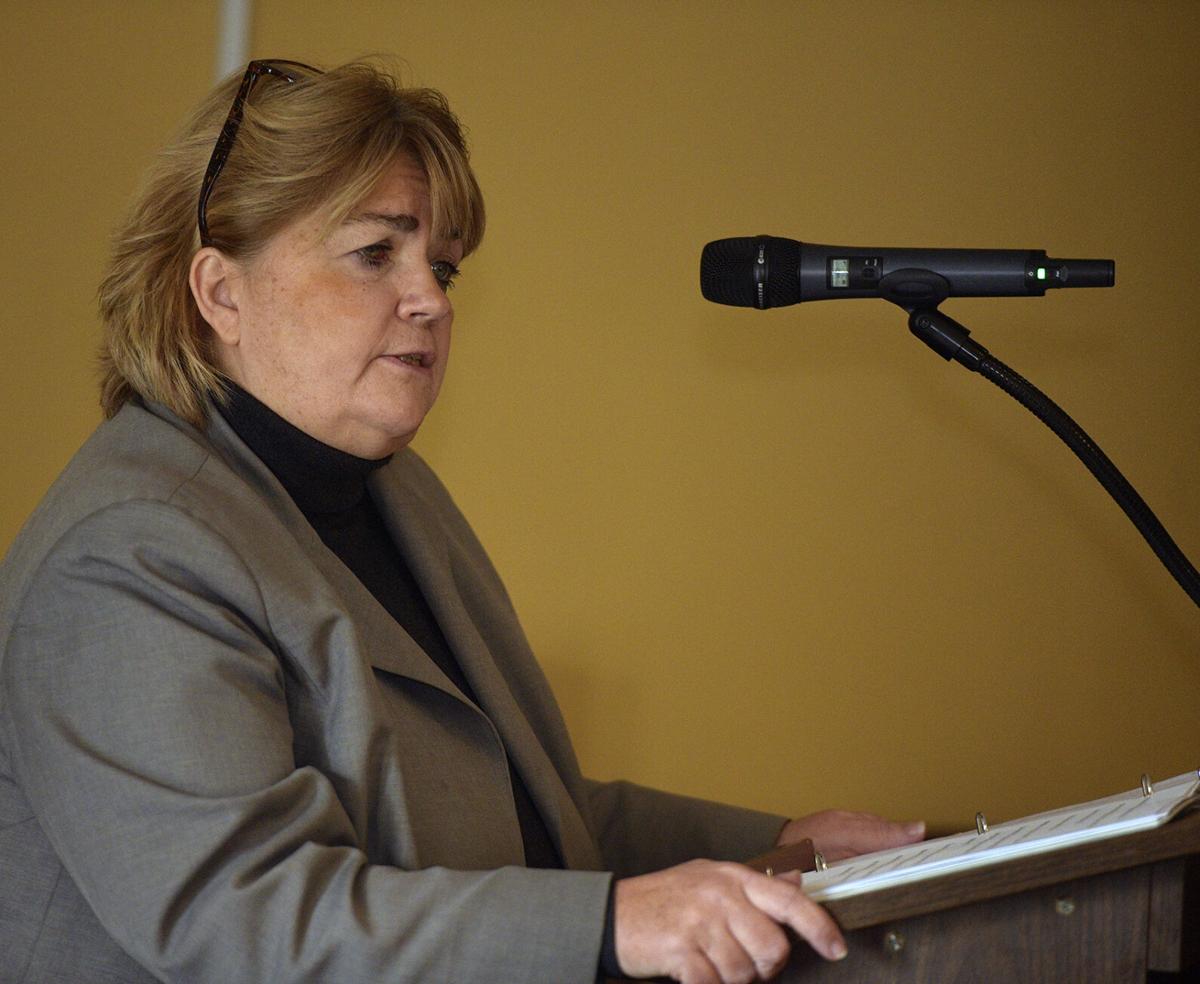 Somerset County Commissioner Pamela Tokar-Ickes talks about how the American Rescue dollars are going to be used in the county at the Eggs & Issues Chamber of Commerce event on Thursday, November 18, 2021. 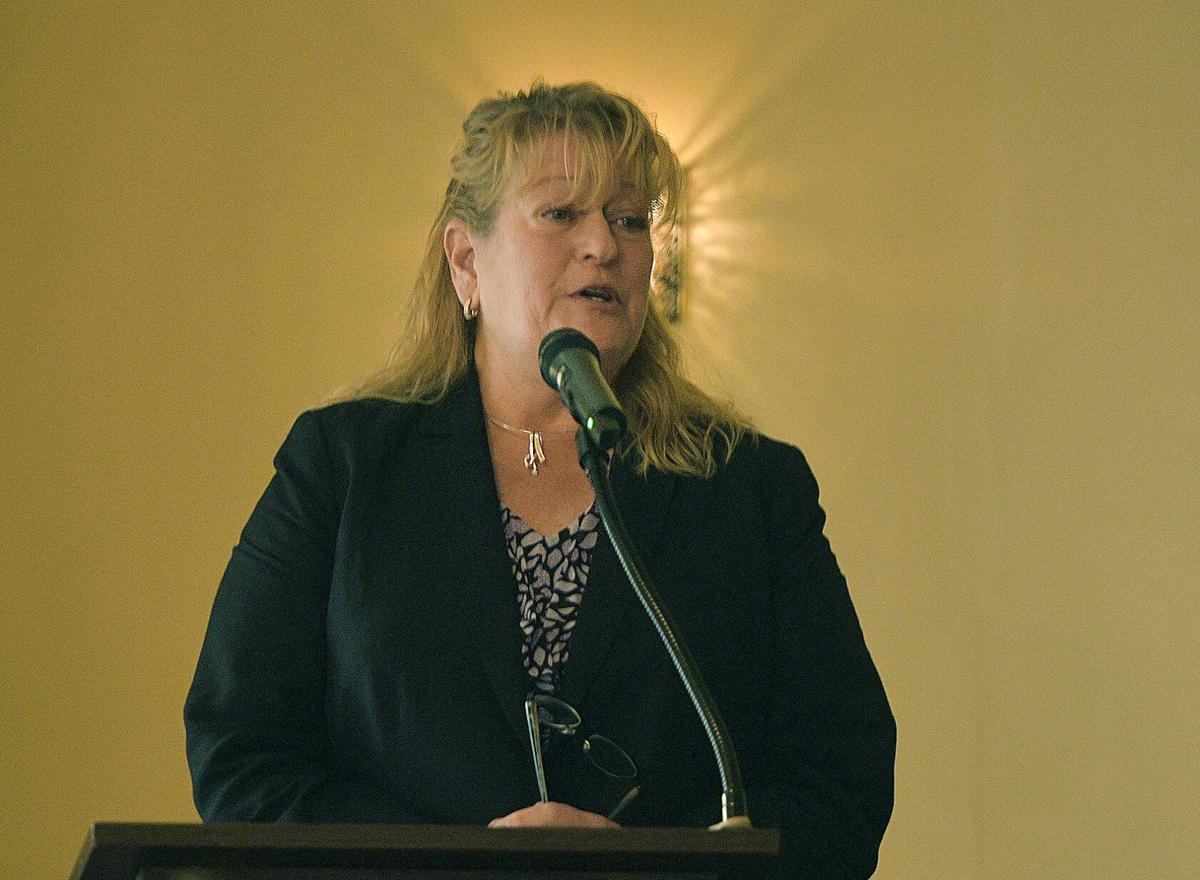 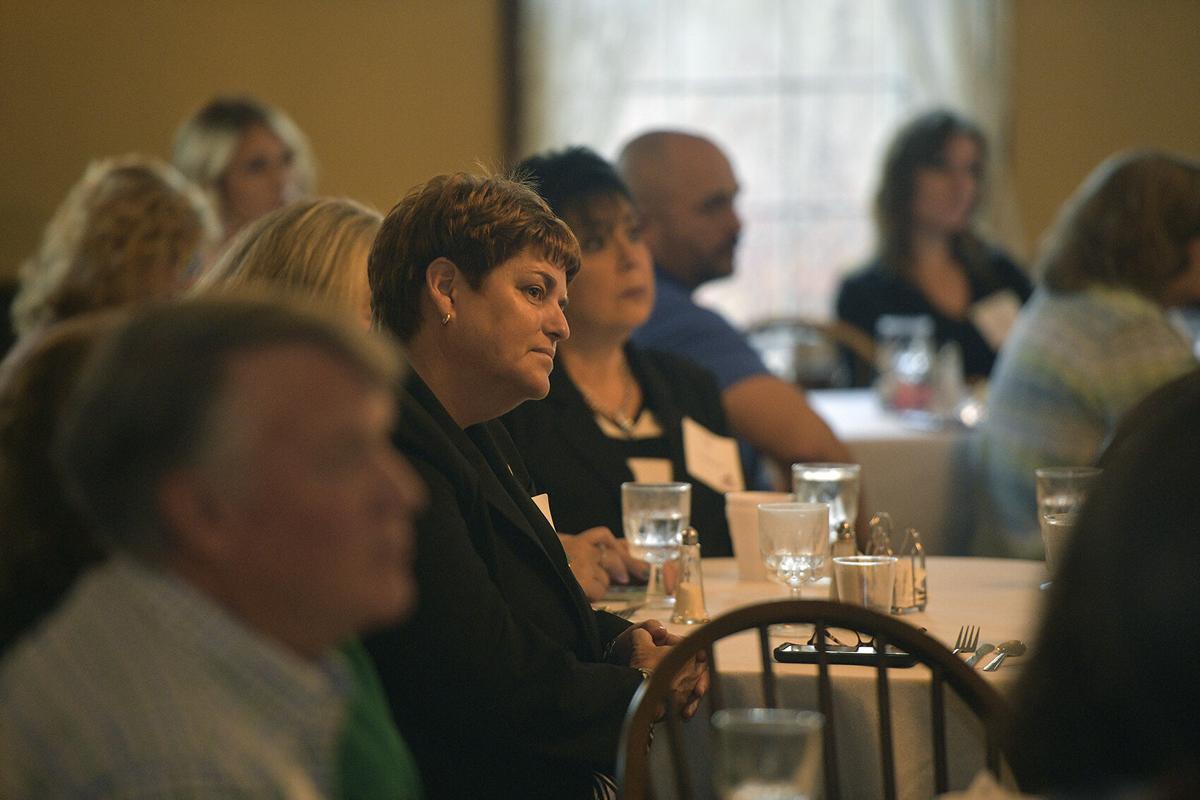 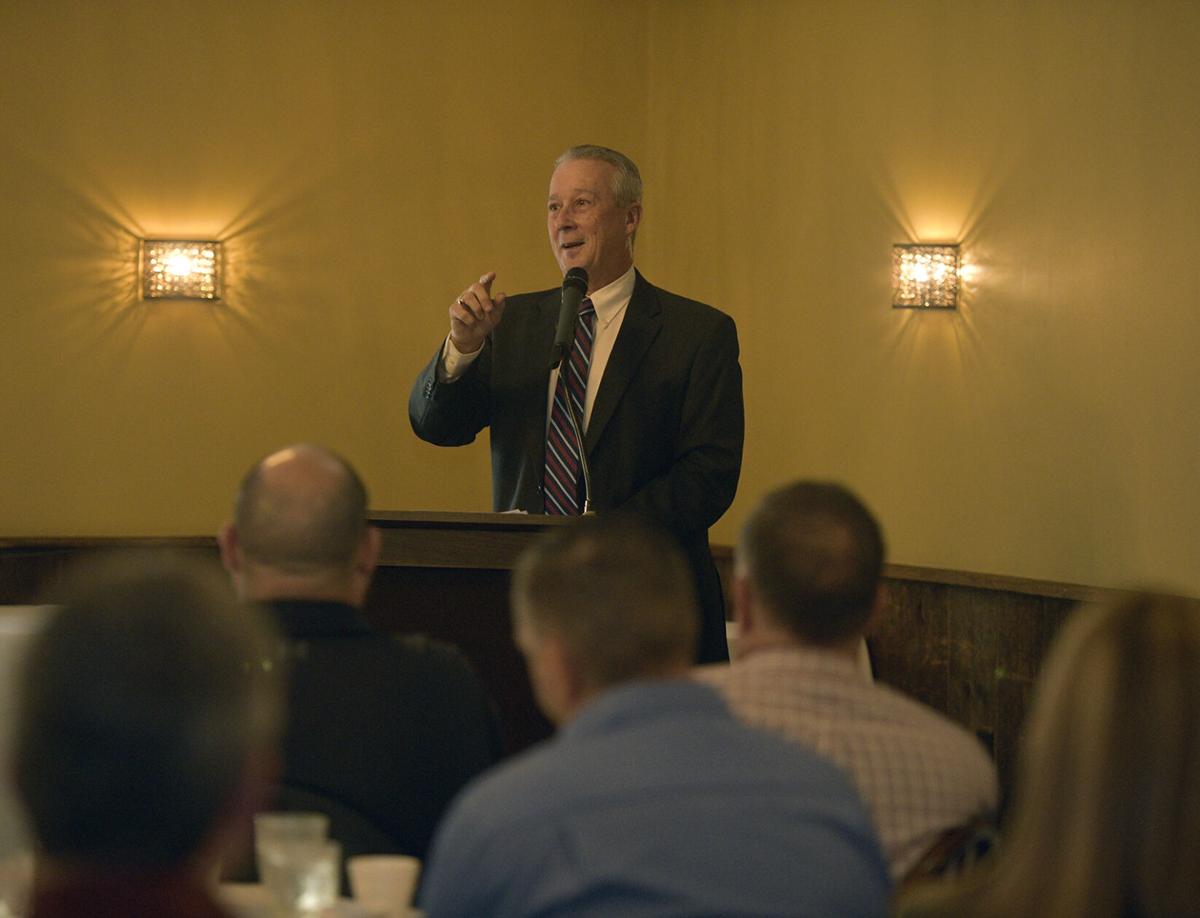 Somerset County President Commissioner Gerald Walker holds up a PennDOT slide presentation on the future of U.S. Route 219 during the Eggs & Issues State of the County event on Thursday, November 18, 2021.

Somerset County Commissioner Pamela Tokar-Ickes talks about how the American Rescue dollars are going to be used in the county at the Eggs & Issues Chamber of Commerce event on Thursday, November 18, 2021.

SOMERSET, Pa. – With billions of new dollars bound for Pennsylvania highway projects and preliminary studies ongoing for the last four-lane segment of U.S. Route 219 in Somerset County, PennDOT plans to open the road to traffic by mid-2031, the Somerset County commissioners announced Thursday.

That doesn’t mean every dime of the more than $244 million project has been secured.

The state’s commitment is a major milestone just the same, given that clearances and funding matches from Pennsylvania are needed to get the final four-lane highway segment studied, mapped and constructed from Meyersdale to the Maryland border, President Commissioner Gerald Walker told area business leaders during the annual State of the County update.

“We have the commitment now that we need to carry this project through to the end,” Walker said, holding up a preliminary project schedule outlining PennDOT’s timeline for advancing the project through more than nine years of planning, site work and construction.

Somerset County and Maryland stakeholders met with PennDOT officials in Salisbury earlier this month to discuss the project, which is now almost one year into the preliminary design phase.

Through a series of funds, including Appalachian Development Highway System dollars secured by the bipartisan infrastructure bill’s passage this week, the commissioners told The Tribune-Democrat on Wednesday they are confident the next funding target – $44 million for final design, right-of-way-land acquisition and environmental clearances – will be in place once the project reaches that point.

State lawmakers have also thrown their support behind the project. But PennDOT’s pledge is just as crucial, Walker said. Over the years, Pennsylvania hasn’t always focused on building new roads – and when it has been, other highways have been higher on the priority list.

No longer, Walker said. With the state of Maryland working in tandem to finish the final few miles of the highway on its side of the state line, completing Route 219 as a four-lane limited-access highway between Cambria County and Interstate 68 in Maryland is now Pennsylvania’s priority, too, he said.

“This,” Walker said, holding up the project schedule, “is so important because it gets the ball rolling. ... PennDOT very seldom puts something in writing that they aren’t trying to accomplish. It’s not easy to get them to put something (like this) in writing.”

That was good news for Bruce Hottle, president of Somerset-based Eagle Concrete, whose heavy trucks travel daily along Route 219, including the current two-lane segment of the highway between Meyersdale and Maryland.

Hottle said Eagle Concrete does plenty of business in Maryland and West Virginia. When the company’s trucks are forced to exit the four-lane highway and travel along rural roads, it adds time, wear and tear – and even safety risks that limited-access highways help drivers avoid.

“When you’re traveling through an intersection on a local road and someone pulls out in front of you, those 80,000-pound trucks can’t stop on a dime,” he said. “Completing that highway isn’t just going to be good for the economy ... it’s going to be a lot safer for everyone.”

Walker and fellow commissioners Colleen Dawson and Pamela Tokar-Ickes delivered the news to members of the Somerset County Chamber of Commerce during their annual update on the county.

The board also discussed efforts to reopen Somerset Lake to the public early next year, to bring broadband internet to regions of the county still without it and, separately, to enhance outdoor recreation opportunities.

Those opportunities include Somerset Lake and the September 11 National Memorial Trail, a potential economic driver for the region that also received a big boost this fall. The 1,300-mile-long national trail network is now federally designated, making it eligible for development funding and also making it a destination on the Department of Interior’s list of national trails.

State Sen. Pat Stefano, R-Fayette, told attendees he was updated on the Somerset Lake project this week by the Pennsylvania Fish and Boat Commission, which is overseeing the work.

“They’re finishing the spillway ceiling now, and there’s going to be a filling and ribbon-cutting ceremony in January ... if all goes according to plan,” Stefano said.

By spring, nearly one mile of trail should also be developed on the property, commissioners said.

Somerset County is also working with Cambria County and four other nearby counties to bridge another gap by making high-speed internet access available for even the region’s most rural neighborhoods.

Alleghenies Broadband Inc., a nonprofit partnership formed by the counties, has funding in place to have an engineering firm study what it will take to build a fiber optic network so carriers can to deliver high-speed internet to those without it.

Shutdowns during the height of the COVID-19 pandemic served as a reminder to the region just how necessary high-speed internet is for businesses and for students who studied from home while schools locked their doors.

The pandemic created many challenges and hardships, but through millions in federal support, including $14 million in COVID-19 relief funds for Somerset County, it has also created improved partnerships and new opportunities, the commissioners said.

“That $14 million ... is the largest infusion of federal funds we’ve received in all of our lifetimes,” Tokar-Ickes said.

The goal is to continue investing the money in “generational” projects, she said. That will result in cleaner, more reliable water, add two more emergency radio towers to the county’s system to fill in communications “gaps” and improve the Que Water System, which provides water to much of the county. The Pinkerton High and Low bridges near Markleton are also being eyed for repairs, Tokar-Ickes said.

‘We’ve been able to persevere’

Tokar-Ickes said the pandemic forced the county to make a broad range of decisions “to handle this as the public health emergency that it was and continues to be” – to prepare and protect the county’s workforce and residents. That work isn’t over, she said.

The completion of other large-scale priorities, including Route 219, also might seem like they’re a long way off, but with continued teamwork at the state, local and federal levels, they’ll become a reality, Walker added.

“(2031) sounds like a long time,” he said, referring to the highway project’s estimated completion date. “But it’s not.”

State of the county highlights

The Somerset County commissioners made the following announcements on Thursday during their annual State of the County address.

• Funding and support is in place to carry the U.S. Route 219 project forward.

• The highway is on PennDOT’s schedule to be completed in 2031.

• Laying out the new segment of Route 219’s path to Maryland will take years to study and finalize, with that phase of the project scheduled to wrap up in 2027, if all goes according to state plans.

• Somerset Lake is scheduled to reopen in early 2022 with nearly one mile of trail.

• Efforts remain ongoing to expand high-speed internet availability in the county. Six counties in the region – Somerset, Cambria, Bedford, Blair, Fulton and Huntingdon – are partnering on a study to move the process forward.

• The county plans to debut an interactive GIS mapping system that will be available for public use through the county’s website next year.

• The county is still pushing to get an Amtrak stop in Rockwood; the biggest hurdle remains convincing track owner CSX to consider the idea.

SOMERSET, Pa. – Three Pennsylvania highway projects – including U.S. Route 219 in Somerset County – stand to benefit from at least $87 million in designated Appalachian Development Highway System funds over the next five years through the federal infrastructure bill signed by President Joe Biden on Monday.