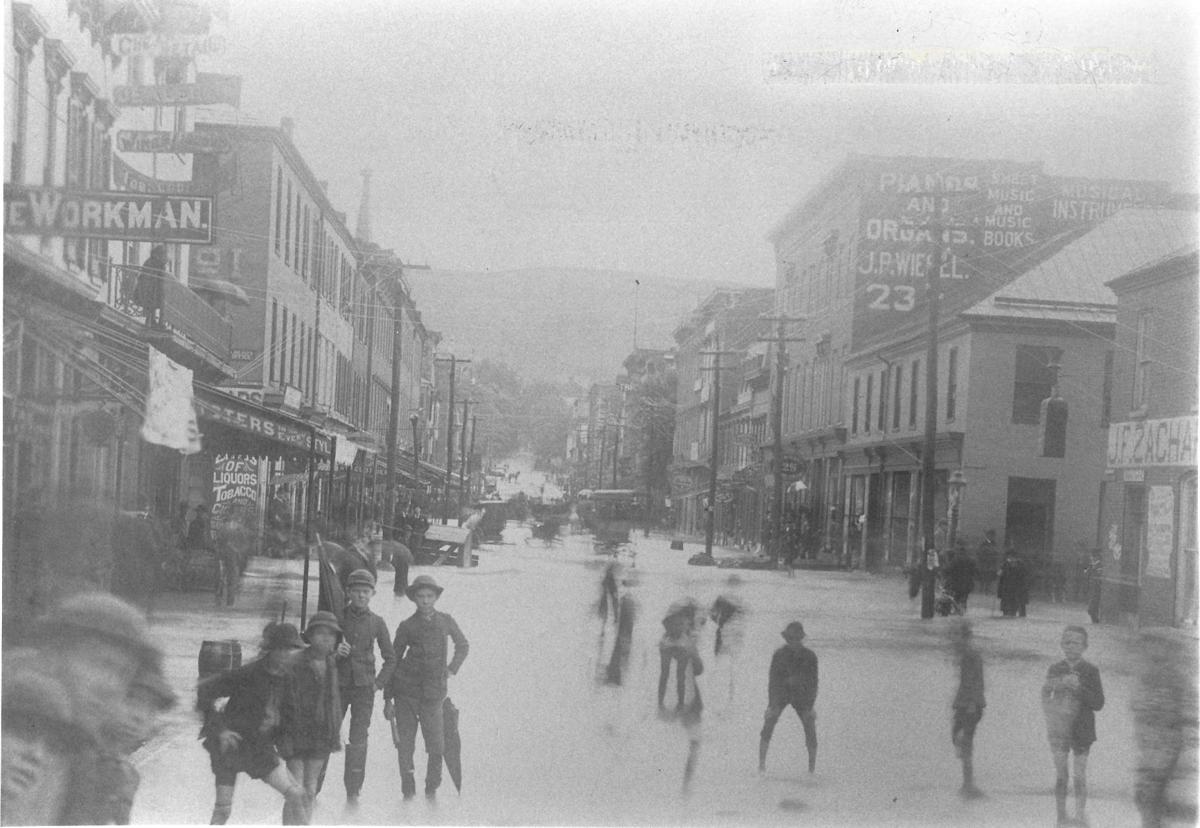 This image shows Baltimore Street in downtown Cumberland, Maryland, during the flood of 1889. 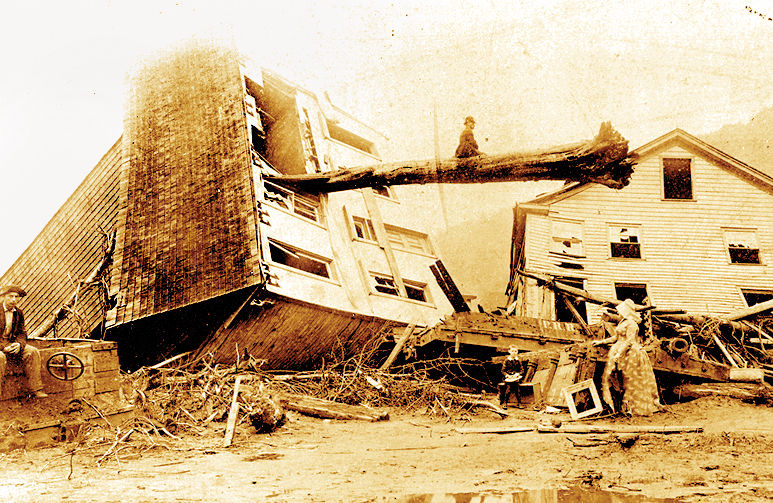 The John Schultz family home was impaled by a tree and carried several blocks from its original site during the Johnstown flood of 1889. All six members of the family survived 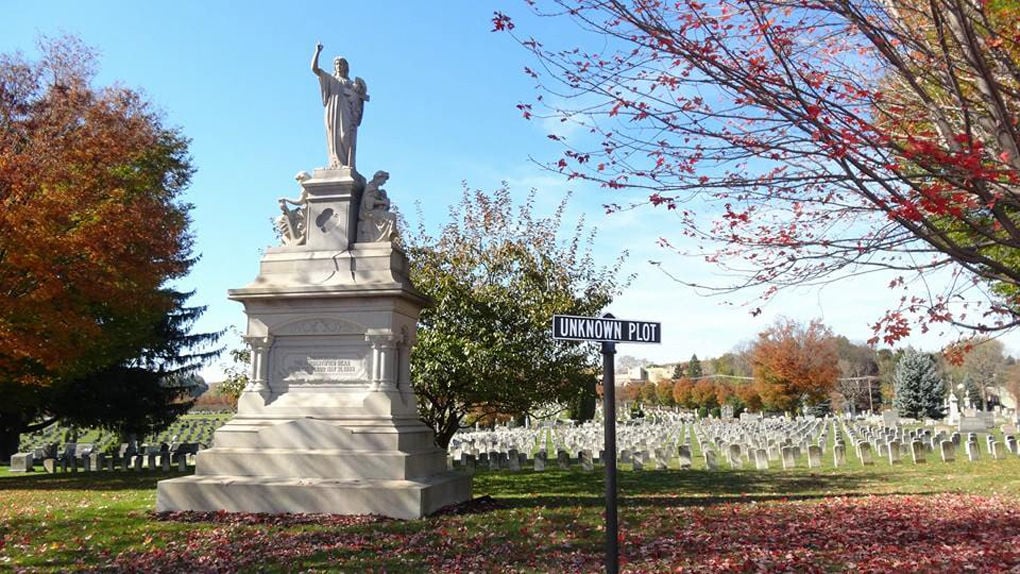 I've attached two photos for the photo contest. Both were taken in October 2013 at Grandview Cemetery of the Unknown Plot. The Unknown Plot is a significant landmark of the Great Flood of 1889 - 777 unidentified bodies are in the plot, each marked by a blank headstone. Please let me know if you need more information. Thanks,Alexis Puhala, 29.

This image shows Baltimore Street in downtown Cumberland, Maryland, during the flood of 1889.

The John Schultz family home was impaled by a tree and carried several blocks from its original site during the Johnstown flood of 1889. All six members of the family survived

I've attached two photos for the photo contest. Both were taken in October 2013 at Grandview Cemetery of the Unknown Plot. The Unknown Plot is a significant landmark of the Great Flood of 1889 - 777 unidentified bodies are in the plot, each marked by a blank headstone. Please let me know if you need more information. Thanks,Alexis Puhala, 29.

On Memorial Day 1889, 68 miles north of Cumberland, Md., the South Fork Dam on the Little Conemaugh River burst. Twenty million tons of water surged into the river to Johnstown – scraping much of the ground clean of trees, buildings, people and animals. More than 2,200 people were killed in the resulting flooding, one of the greatest disasters in American history.

The same weather system that set off the flooding in Johnstown also caused problems along the Potomac River in Maryland.

But no one south knew it was happening at the time because the flooding knocked out telegraph lines in Johnstown.

“On Friday of last week the clouds began to come up from the Southeast, in thick, heavy masses, lowering until they seemed to roll over the mountains in dark, broad volumes.

“All day they continued to come, growing denser and swifter, and at three in the afternoon the showers came down, one after another with but slight intermission. Each succeeding downpour seemed heavier than the one before it. As night approached it could be seen that the Potomac river was rising rapidly; so, also, the Conococheague creek,” according to the Williamsport Transcript.

Other reports said that a cyclone had entered the valley near Martinsburg, West Virginia, moving north and crossing the Potomac River a few miles above Williamsport. It was followed by the heavy rains that caused the Potomac flooding.

Men waited in the telephone office in Williamsport, evermore nervous as the river rose.

They called to Cumberland asking about conditions there since it could indicate what Williamsport would experience. The only report from the Queen City was that it was raining. While true, it was an understatement. Cumberland was already experiencing its own problems.

Newspaper reports put the beginning of the rain in Cumberland at midnight on Thursday, May 30.

After 17 hours of rain, the Cumberland Daily Times reported, “At five p.m. the entire city between Centre Street and Will’s creek on the one hand, between Bedford and Will’s creek on another, and in South Cumberland as far down as the canal wharves, was under water to a depth varying from 6 inches to 8 feet.”

The Daily Times took extraordinary efforts to continue publishing throughout the flood. Baltimore Street outside of the newspaper was under 3 feet of water at one point and the building’s cellar was filled. The pressroom on the first floor had several inches of water on the floor. Newsboys were mounted behind horsemen and their steeds. They then “waded and swam with them to all portions of the city, whose inhabitants had not boarded up their usual means of receiving the paper,” the Daily Times reported.

The waters in both Wills Creek and the Potomac River rose steadily until 9 p.m. on Memorial Day.

Once the rain stopped, the Daily Times described how Cumberland looked: “A city lighted by electric lamps and gas lay half under water and upon one side surged a raging torrent ordinarily the pacific Potomac river, while separating much of its residence portion from the business centers a maddened stream swolen (sic) by mountain brooks had burst its banks as the ocean over the Dikes of Holland.”

Mechanic Street and the buildings along it suffered the most during the flood. Newspaper reports noted, “and locomotion, while disagreeable, was by no means dangerous, except on Mechanic street, in the vicinity of Landwehr & Glick’s lumber yard, where the water attained a depth of six feet. A ferry boat was used here.”

Water filled every building on the street to above the first floor.

In some buildings, the water nearly reached the second floor.

Business at the western end of Baltimore Street was suspended by 4 p.m. May 31. The owners then went to work trying their best to keep water out of their buildings. Besides the businesses, the water got beneath the bricks on the sidewalks and knocked them out of place.

“Several business men were out in boats and others swam their horses in the stream, riding forth like young Lochinvar in the story, with some one behind them,” the Daily Times reported.

Wagons were put to use to move people out of the flooded areas until around 10 p.m. when they began to act more like leaky boats than wagons. Around this time, a Standard Cab had to be rescued from the flood waters when it foundered.

Forward-thinking people stretched ropes across some roads and culverts. This gave people who were swept off their feet in the rushing waters something to catch onto to save themselves.

Some sewer lines were destroyed when they were overwhelmed with water. Mud carried by the rushing waters wholly filled in the mill race. The dam at Folck’s Mills was swept away.

Police went door to door checking on families and rescuing one family by carrying the members out on the police officers’ backs.

Surprisingly, no one died in the flooding, although some animals were drowned. A clerk on the Central West Virginia Railroad was swept away while walking to work and believed to be dead. However, he showed up the next day for work having lost only his hat.

Dr. J.R. Garman swam his horse into the water to rescue a floundering woman, pulling her onto the back of the horse.

The C&O Canal towpath acted as a low dam, helping shield Cumberland from some of the flooding. Water eventually covered it, though, and at one point in the city, it looked like it would wash out completely, sending more water surging through the city. A group of men anchored boards along the weakened area to give it some strength.

“Had the towpath given way at this point South Cumberland would have been inundated,” the Daily Times reported.

Flintstone was also noted as having flooding problems, although not to the extent that Cumberland suffered. “A perfect deluge exists and low lands are under water 7 and 10 feet deep,” the Daily Times noted.

The cleanup began on June 1, and early estimates were that the loss to Allegany County was $150,000. This would be about $5.5 million in today’s dollars.

Despite the damage and cleanup that Cumberlanders were facing from the flood, they came together to donate goods for the survivors of the Johns-town Flood.

A train sent from Cumberland arrived in Johnstown around 12:35 p.m. June 3 with seven carloads of supplies.

One of the reasons for the compassion was that some Cumberlanders had relatives in Johnstown.

Mrs. S.M. Jones, whose husband was in Cumberland, was caught between bureau and wall and drowned in the house she was visiting in Johnstown. Her young son was swept away and presumed dead.

Sarah Thomas, whose family was in Cumberland, was in a house in Johnstown that floated 1.5 miles downstream before it was dashed against a dam of driftwood. She was able to escape the house on the dam.

Reports from Superintendent Ed Mulvaney and J.P. Biser arrived at the canal company 10 days after the flood. Needless to say, the damage was extensive – from destroyed dams and breaks in the towpath to missing lockhouses and 1,200 cubic yards of mud at Georgetown. The damage to the canal was initially said to be between $500,000 and $1 million. That number was eventually lowered to $250,000 to $300,000.

The Hagerstown Mail reported that Mulvaney told them, “A number of canal boats are washed out in the fields, and some of them badly damaged.”

He also estimated the damage to be twice that of the 1877 flood.

This was beyond the C&O Canal Co.’s ability to pay for.

With that announcement, the canal as run by the canal company was dead.

It would go into receivership with the B&O Railroad emerging as the receiver and essentially, the new owner of the canal.

The Hagerstown Mail compared the canal to a dead patient. “Upon its tombstone may be inscribed in a few words that, it died of politics and politicians … It was not the storm that killed the Canal – it could have recovered from the flood, had its recovery not been already rendered impossible by political blood poisoning.”

The final tallies from the flood damage along the Upper Potomac put it at 50 lives lost and more than $2 million in lost property.

James Rada Jr. is a freelance writer and occasional contributor to Allegany Magazine, Johnstown Magazine and The Times-News of Cumberland.