But it does include more than $5 million in projects, including upgrades to the county’s emergency radio system, the Que water system and two county bridges, board members said.

Commissioners Gerald Walker, Colleen Dawson and Pamela Tokar-Ickes unveiled on Wednesday a tentative $53.3 million budget that serves as a spending plan for a county that includes 337 full-time and 120 part-time workers.

The plan accounts for $7 million in planned expenses covered by the American Rescue Plan – including the tower, water system and bridge improvements.

And with prison populations lower, to account for the virus’ risks over the past 18 months, Somerset County Jail is on track to be nearly $1 million under its $3.6 million expense budget in 2021. 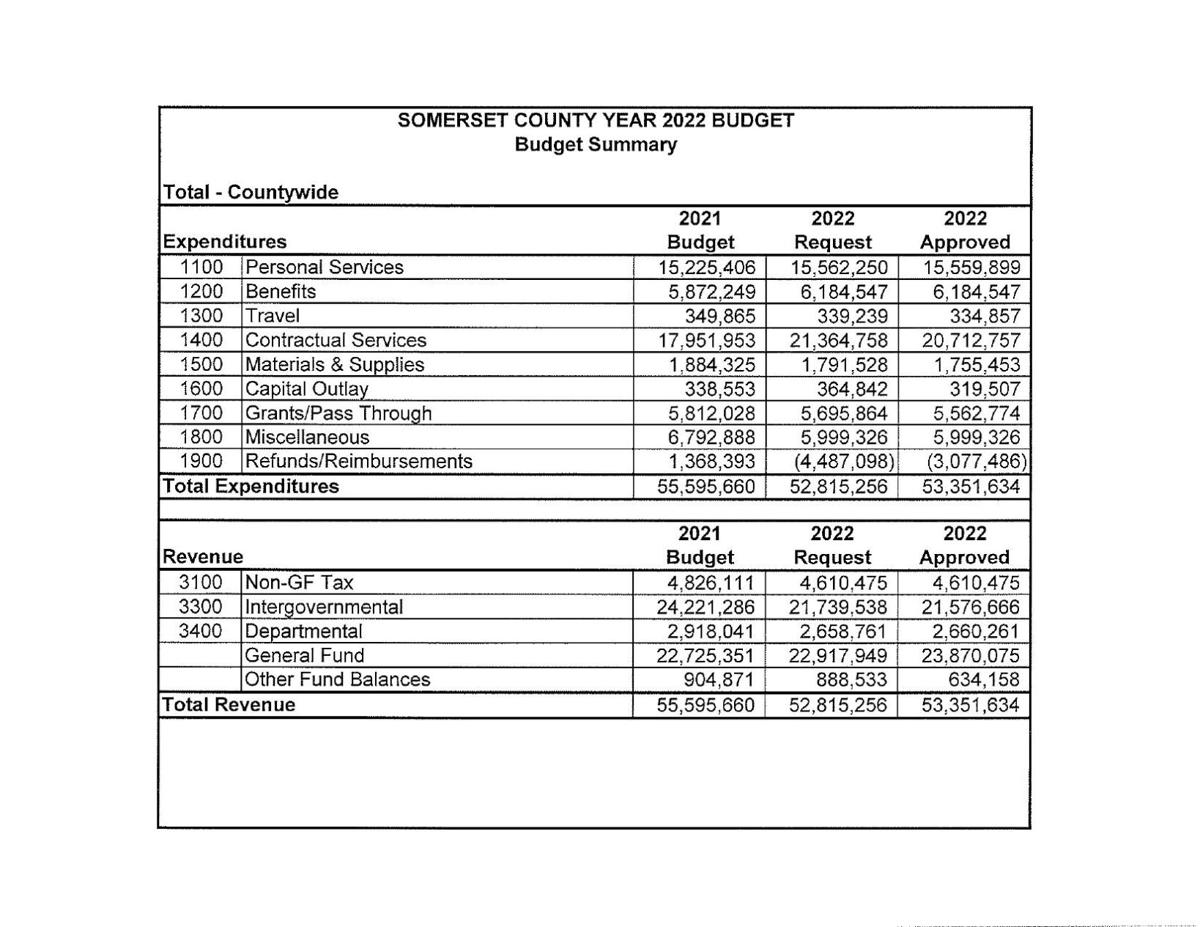 Counties are obligated to cover costs to house their offenders – and the projected savings is rare if not unprecedented for a department that runs in the red annually, the commissioners said.

“We see that as an anomaly. That won’t happen again,” Walker said, citing reduced food costs, lingering 2021 vacancies and retirements as explanations for the savings.

Still, it was part of the reason the county will be able to roll over $3 million in 2021 funds in January to help offset a projected $5.6 million budget deficit in 2022.

Walker said that deficit is an unlikely “worst-case” scenario for the coming year.

Over six of the past seven years, the county has projected to use reserve funds – sometimes well over a million dollars’ worth – to balance the budget and then instead carried over an end-of-year surplus to the following plan, rather than tap into those reserves.

“The budget plan is the county’s starting point in our ongoing and daily budget process,” Finance Director Rebecca Canavan said.

“When you develop a budget ... you project what you think you’re going to need,” Tokar-Ickes said. “But once that happens, our budgeting is really done day to day (throughout) the year. and hopefully, as you go through the year, there are cost savings.”

That includes every level of county government, including the jail, county departments and judicial branch, Canavan said.

While the county received $14 million in federal support for designated uses – such as broadband upgrades – that one-time funding can be offset by flat funding and budget cuts by the state to other departments, despite continued mandates, she wrote in her budget report.

With that in mind, county officials are planning to spend the money they did receive on “generational” projects – in Dawson’s words – efforts that will pay dividends for Somerset County for decades to come.

“Nothing can be 100% (perfect) with our topography,” Dawson said. “But it’s our hope this will address a large number of areas where there are gaps in coverage.”

Somerset County officials view their Que Pipeline waterline as a the county’s key to future growth.

And $1.1 million will be set aside to upgrade that system, including the replacement of settling tank “clarifiers” at the Conemaugh Township treatment system that supports the transmission line.

Another upgrade will install a new water system monitoring “SCADA” communications system, the board said.

The commissioners are vying to use composite materials for the project to extend the new deck’s lifespan to up to 30 years, she said.

Walker said the county will seek to get those projects out for bid early next year.

Given supply-chain delays, it could take time to get the necessary materials delivered “so the earlier we can get them approved the better off we’ll be,” Walker said.

A few other budget notes:

• Health care costs through UPMC will be up 15% in 2022. That increase matches last year’s hike – and had to be negotiated down to match it, Dawson said.

• The county’s pension contribution will dip from $2.4 million to $2 million in 2022. It’s not quite as simple as a savings, though, the board said. The county made an extra payment earlier this year following an actuary recalculation that now reflects employees’ longer life spans.

• Salaries and benefits, at $21.7 million combined, represent almost 37.9% of the 2022 budget and contracted raises were the main driver behind the small 1% overall general fund budget increase from 2021 to 2022, the commissioners said.

Somerset County’s budget will remain on display for 20 days, and will be on the board’s agenda for final adoption Dec. 14.

The spending plan is on display in the commissioners office and county website for pubic view.