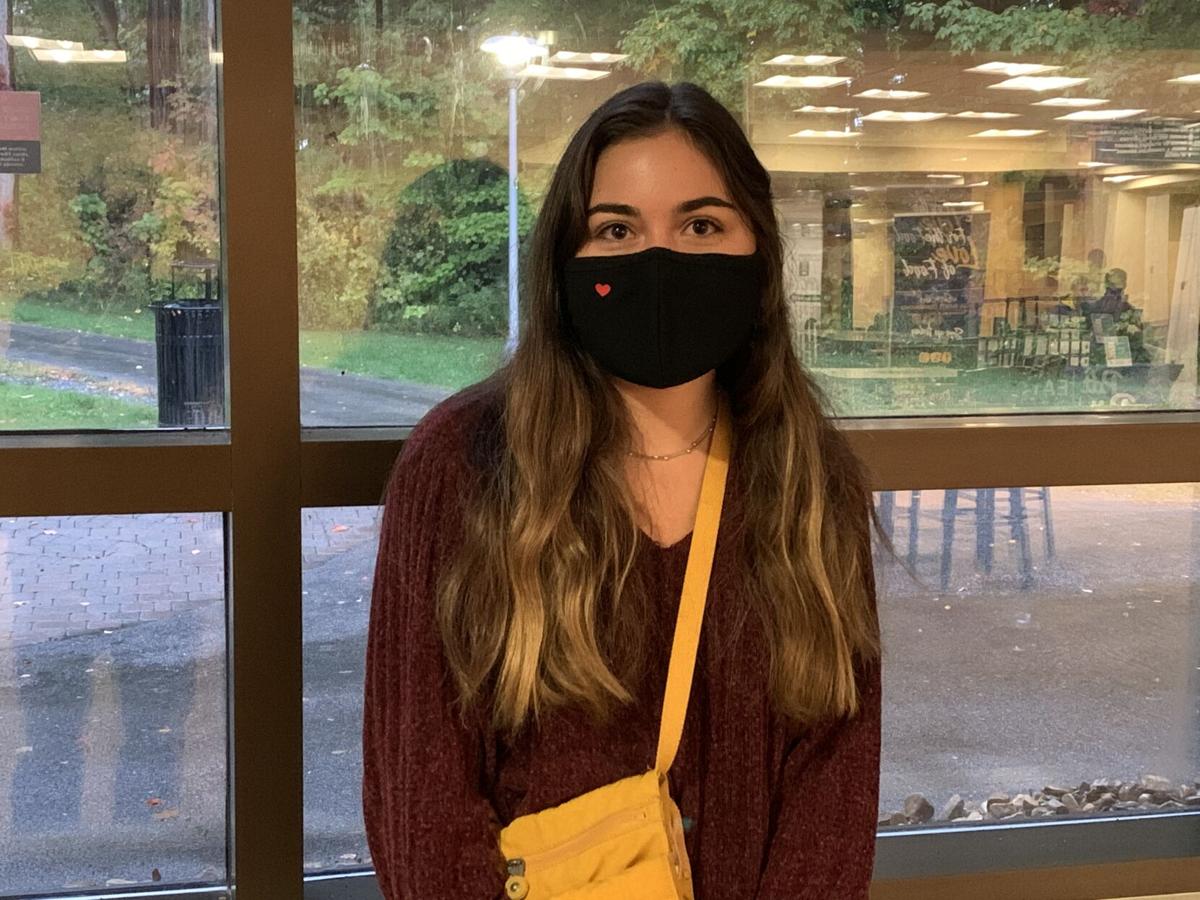 Emma Freeman, a senior from Gettysburg studying political science at the University of Pittsburgh at Johnstown, supported Bernie Sanders in the 2020 Democratic primary. 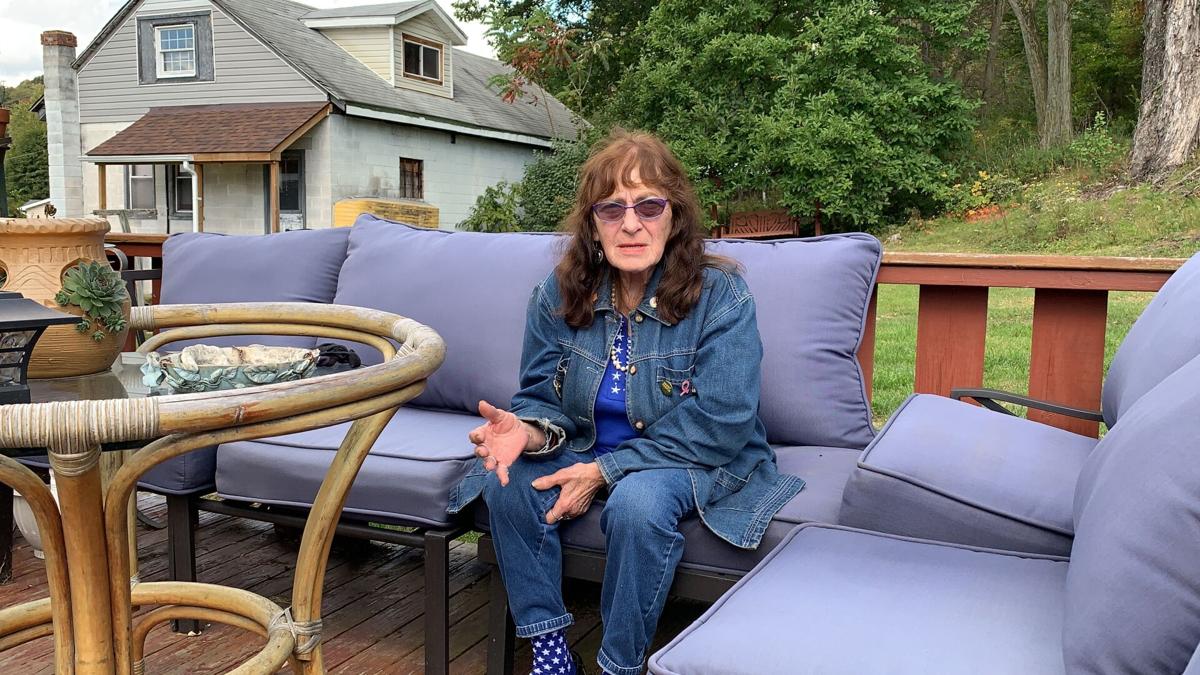 Gloria Sullivan, a 78-year-old retiree from Windber and member of the Cambria-Somerset Tea Party, said she fears a shift toward socialism if Democrats gain more political power. 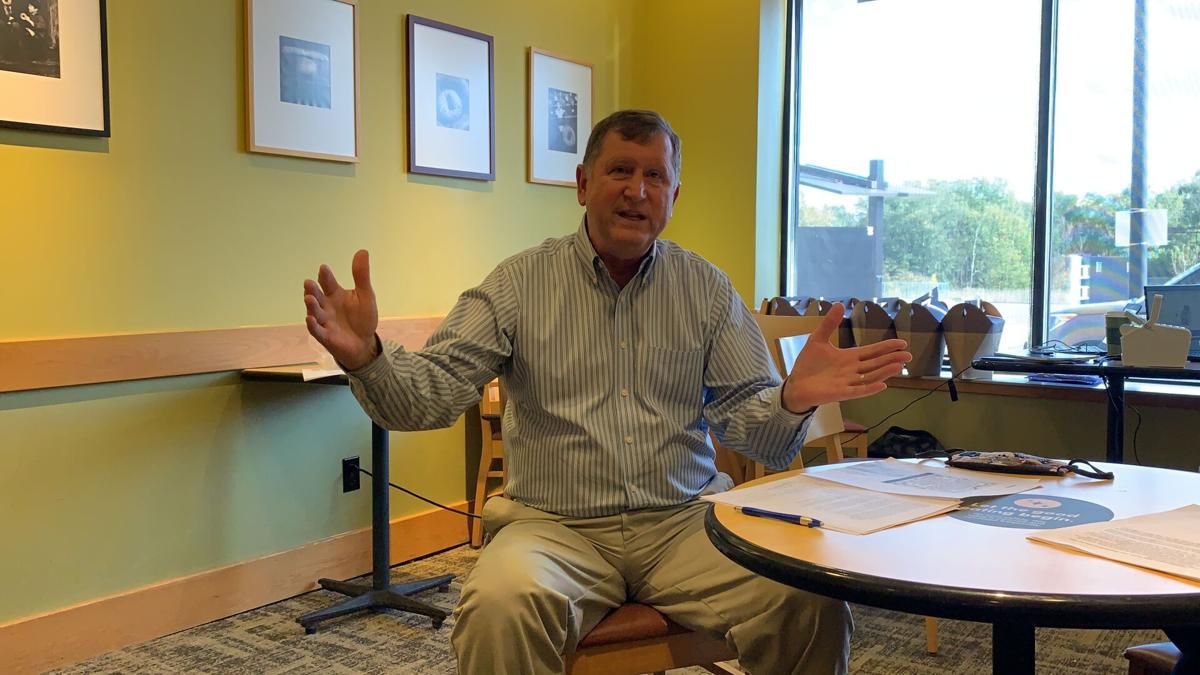 Douglas Lengenfelder, a retired Air Force lieutenant colonel and former Cambria County commissioner, said he considers socialism to be “a pseudo-religion, grounded in pseudo-science and enforced by political tyranny.” 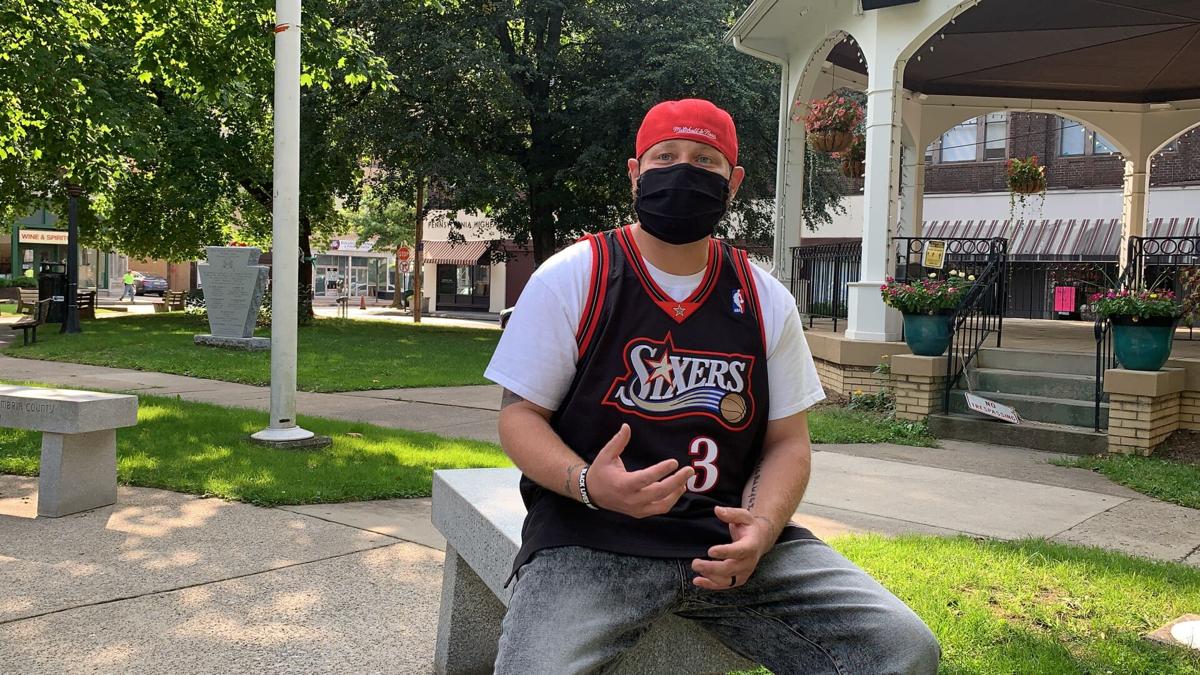 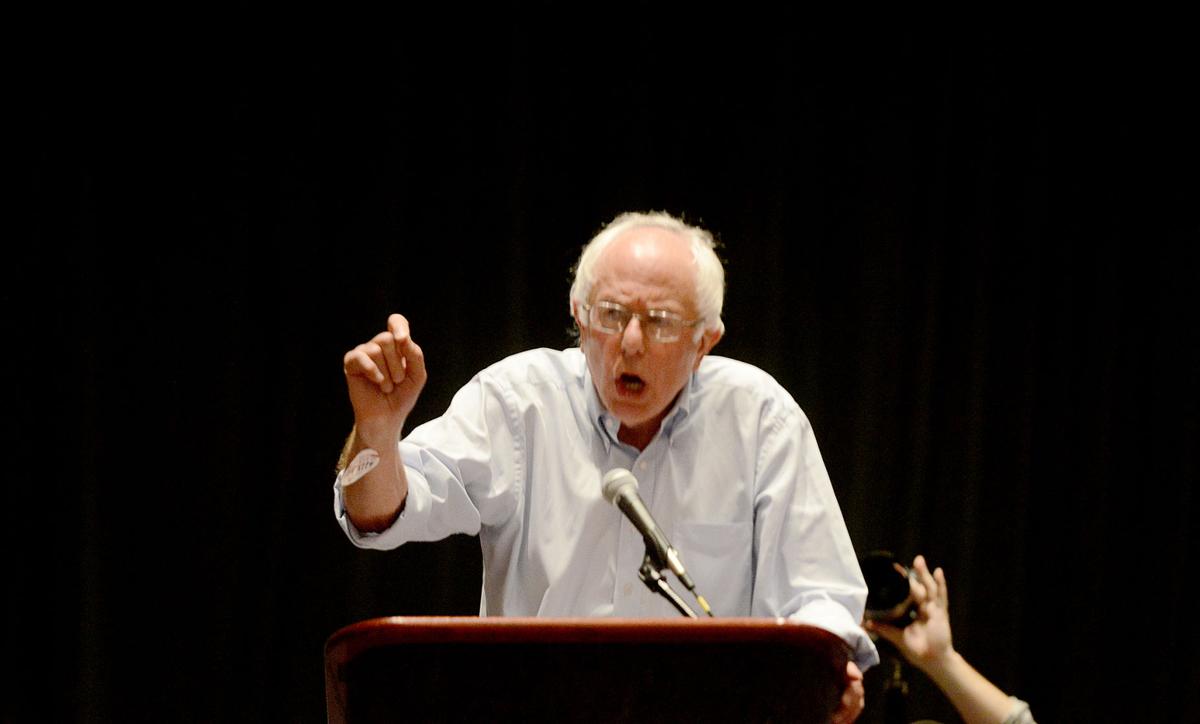 Sen. Bernie Sanders speaks to a group of delegates at the Democratic National Convention in Philadelphia on Monday afternoon.

The word “socialism” has become like an inkblot test.

In a strict dictionary sense, it is an ideology in which the means of production and distribution should be owned or regulated by the community as a whole. But rarely is that description the one used by United States citizens when discussing socialism.

Rather, perceptions vary widely to include universal health care, a safety net for the nation's most vulnerable citizens and causes historically championed by the labor movement all the way to the tattered economy in Venezuela where inflation reached 10 million percent, government regulations intruding on personal freedom and the former Union of Soviet Socialist Republics' violent dictatorial rule.

The response to the inkblot word “socialism” depends on an individual's own psychology, environment, political beliefs and understanding of the subject.

“You get a variety of different interpretations based on the knowledge that people have about socialism and communism,” said Terry Madonna, director of the Center for Politics and Public Affairs at Franklin & Marshall College.

“Socialism” has become a polarized political word in recent years.

U.S. Sen. Bernie Sanders, an independent from Vermont, sought the Democratic Party presidential nomination in 2016 and 2020, running as a democratic socialist, which combines a democratic government with socialist economic policies. The debate over what is socialism has been a regular point of contention during this year's general election between President Donald Trump, a Republican, and Democratic Party nominee former Vice President Joe Biden.

“Americans divide along the lines ideologically, meaning progressives, liberals tend to support aspects of socialism,” Madonna said. “Basically, it's defined as government runs the economy, as opposed to the free market, setting the rules and the regulations, etcetera."

He added: "When it emerges in the campaign, essentially a lot of people don't relate (socialism) to communist countries that have used it for a whole variety of purposes that we would historically not utilize in our own country. It's complicated.”

The socialism schism often separates along the lines of political beliefs and age.

A Gallup analysis, released in late 2019, showed that 49% of Millennials and Gen Zers viewed socialism favorably, while 51% held the same opinion about capitalism. Thirty-nine percent of Gen Xers felt positively about socialism with that number dropping to 32% for Baby Boomers and traditionalists.

Overall, the poll found that 39% of Americans had a positive opinion of socialism, while 57% viewed it negatively.

Sanders made strong showings in the 2016 and 2020 Democratic primaries thanks – in large part – to the support of younger voters.

Emma Freeman, a senior from Gettysburg studying political science at the University of Pittsburgh at Johnstown, supported Sanders in this year's primary. “I don't think he was as radical as most people made him out to be,” Freeman said. “I actually agreed with most of his policies.”

She believes that “putting more power and means in the hands of the workers instead of the big guys on top … would be something else that I think is very important. Minimum wage should be much higher. Workers should earn more for what they're doing in a way to disperse or lessen the concentration of wealth.”

Trump has often attempted to label Biden as a socialist.

“Biden has made a corrupt bargain – in exchange for his party's nomination, he has handed control to the socialists, and Marxists and left-wing extremists,” Trump told his supporters during a recent rally at the John Murtha Johnstown-Cambria County Airport.

“I think it's gradually been going toward socialism with the Democrats being in power,” said Gloria Sullivan, a 78-year-old retiree from Windber and member of the Cambria-Somerset Tea Party. “They want to regulate everything that we do, everything we say. I'm just concerned that it's not good for all the people because everybody has different ideas and different ways to live. And they want to put us all in one little basket and this is how you have to be.”

In contrast, Freeman said, “Socialism is associated with communism, which they really are two very different things. In theory, socialism may lead to communism, but it certainly doesn't have to, especially if it's democratic socialism. Our grandparents or parents experienced the Cold War and red scares, and they're terrified of the words 'communism' and 'socialism' without truly understanding what it means. Like mentioning how a big important factor of it is giving workers more power. I think most people who are scared of it don't even really know that aspect of it.”

Jay Deaver, a 36-year-old Navy veteran from Johnstown, who backed Sanders, thinks “that older generations and even some of the current generations – maybe, the one before me, Baby Boomers – either aren't educated or choose not to educate themselves on a lot of things because it doesn't fit their narrative of the things that they think should happen in this country.”

To Deaver “socialism is putting every citizen on a level playing field, just making sure everybody is provided for” and “giving everybody a fair shot at life and succeeding.”

Deaver sees other nations where socialism programs are in place and thinks they can work in the United States.

“I don't know if there's a perfect model,” said Deaver, a Democrat who volunteered for Sanders. “But, if it is working in these European countries and Canada, why would it not work here? We have the tax money to do it. You have a bloated military budget that I think is astronomical. Having served in the military, I've seen excess that was not needed. And that could even go down to a local level outside of the military, like police. Yes, police should have the things they need. But if you have an armored vehicle and not a body cam, you're spending the money in the wrong place.”

But there are differing opinions even within the Democratic Party.

Eric Miller, a 46-year-old union president with the Johnstown Fire Department, recalled a trip to Cuba where he met people who were told what they would do for a living.

“It was an eye-opener to really see,” Miller said.

He continued: “When you see people like that, when it's truly government-run, that's my interpretation of the word 'socialist.' ”

There are some elements of socialism in modern government, according to Miller, pointing to recent financial assistance given to organizations during the ongoing COVID-19 pandemic, including Forest Hills Area Ambulance where he serves as manager.

He said the money helped a lot, since the service saw a large loss of revenue due to fewer calls and restrictions on fundraisers. But, Miller said, “look at all, right now, with COVID, I hate to use the word 'handouts,' but all the grants and everything that are getting everyone through. We've got to make sure we don't get dependent on those.”

Douglas Lengenfelder, a retired Air Force colonel and former Cambria County commissioner, compares socialism to a game of Monopoly with modified rules in which instead of receiving $200 for passing "Go" the player with the most assets would need to turn over property and money.

He believes that would demotivate the recipient.

“Pretty soon, an individual sits back and goes, 'Wow, I don't have to buy property to get property, I don't have to save money to get money,' ” Lengenfelder said. "And, all of a sudden, it's easier to sit back, and do nothing, and just wait for somebody else to pass go and collect from them.

“Well, that's one way of looking at socialism.”

Lengenfelder considers socialism to be “a pseudo-religion, grounded in pseudo-science and enforced by political tyranny,” citing Venezuela, a once oil-rich nation that, he said, was crippled during the presidency of Hugo Chávez, a member of the United Socialist Party of Venezuela.

“What does that mean?” Lengenfelder said. “Of every country that I've been in – and I've been in a bunch, over 55 nations around the world – I've never seen what is a purely socialist system be successful. What I have seen are the Venezuelas of the world that promise all sorts of wonderful things and then the leaders, unable to deliver, step back and at least make sure the leadership is taken care of in a country.”

That then often leads to the ruler consolidating power, Lengenfelder said.

“You can vote your way into socialism, but I guarantee you will have to fight your way out of it,” he said.

Lengenfelder views the systems as the difference between “we the people,” capitalistic, individual rights and a “we the state” mentality where the collective what-is-best-for-everybody approach is used. The only nations, in his opinion, that have had any success with socialist or communist policies are the ones with modified systems that include an entrepreneur-driven, capitalist economy. He cited France and China as examples.

Some of the strongest resistance to socialism and communism has come from religious groups, most notably when the Roman Catholic Church, led by Pope John Paul II, played a major role in the eventual collapse of the Iron Curtain in 1989.

Bill Ragley, a 77-year-old Republican from Jackson Township, roots his opposition to socialism in biblical theology.

Ragley said he supports a “healthy safety net for people that really need the welfare,” but does not like when the programs become too comfortable and expected, likening them to hammocks at that point.

“Hammocks should be outlawed,” he said.