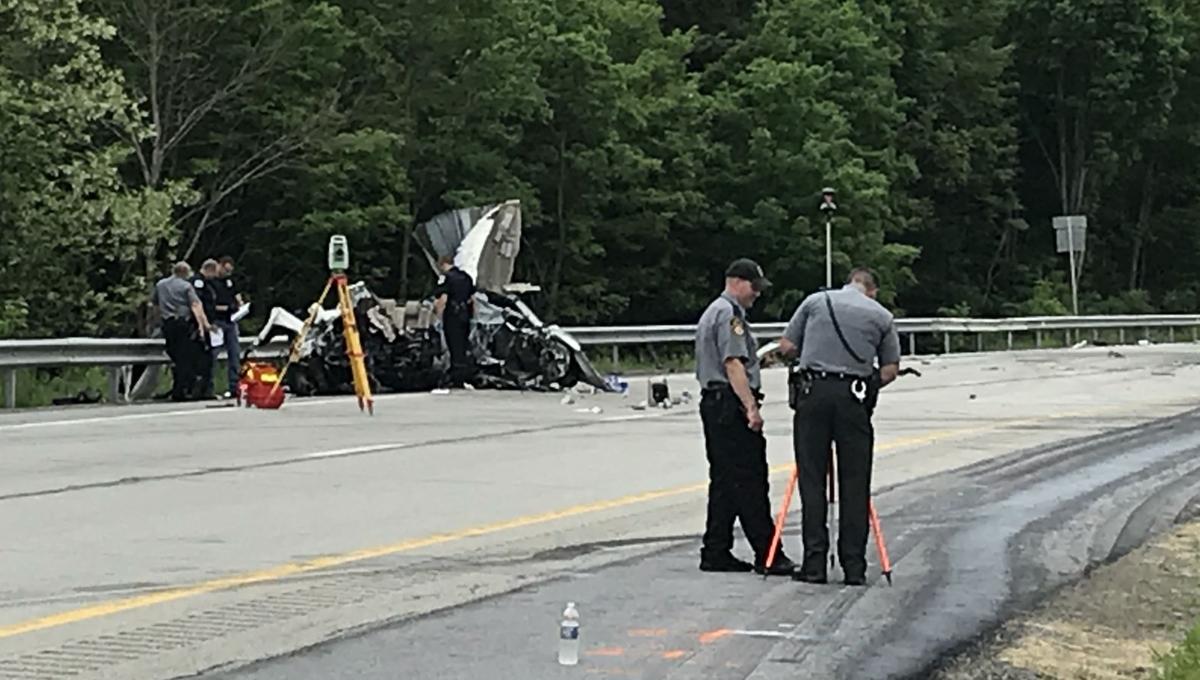 Local and state police investigate the scene of a three-vehicle crash on the northbound lanes of Route 219 in Adams Township, Cambria County, on Thursday, May 31, 2018. 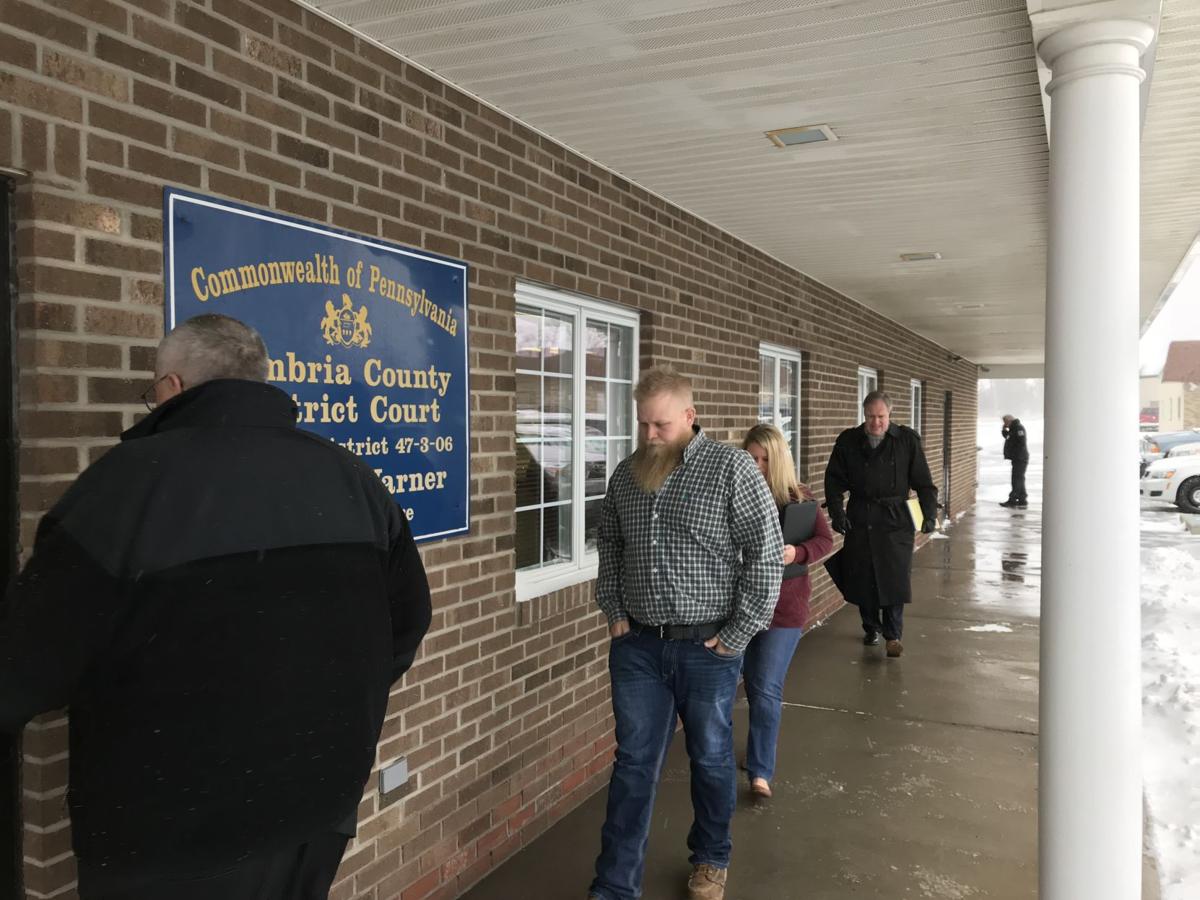 Chase Edward Turner, second from left, is escorted by police into the office of District Judge Rick Varner, of Salix, on Wednesday, Nov. 28, 2018. Turner was ordered to trial on charges of homicide by vehicle in connection with a May 31, 2018, crash on Route 219.

Local and state police investigate the scene of a three-vehicle crash on the northbound lanes of Route 219 in Adams Township, Cambria County, on Thursday, May 31, 2018.

Chase Edward Turner, second from left, is escorted by police into the office of District Judge Rick Varner, of Salix, on Wednesday, Nov. 28, 2018. Turner was ordered to trial on charges of homicide by vehicle in connection with a May 31, 2018, crash on Route 219.

EBENSBURG – Julio Alejos told jurors he didn’t recall much after leaving Quaker Steak & Lube in Richland Township late in the evening on May 30, 2018.

Alejos, 34, did remember that he was “very drunk,” had smoked a cigarette outside of the restaurant and had vomited.

He then told prosecutors that he had fallen asleep in the cab of the blue 2009 Dodge Ram that police say is responsible for a wrong-way collision on U.S. Route 219 that took the life of Olivia C. Red in the early moments of May 31, 2018.

Prosecutors say that Chase Edward Turner, 30, was behind the wheel of the pickup truck as it was traveling southbound in the northbound lanes of Route 219, hitting the white Toyota Camry driven by Red, 20.

Alejos was one of five witnesses to take the stand during the second day of the jury trial for Turner, of Barboursville, West Virginia.

Alejos said that had no recollection of the collision, but that he remembered waking up in the grassy median dividing the northbound and southbound lanes of Route 219 in Adams Township.

“My back was in pain,” said Alejos, who suffered a thoracic spinal fracture, according to medical records. “I just laid there.”

While Turner’s defense counsel is arguing that their client was not driving the vehicle that night, Alejos said that it wasn’t him behind the wheel, either, telling the court that he never drove Turner’s vehicle. But Alejos testified that he did believe that Turner had driven his 2000 Dodge Durango on occasion while the two shared temporary residence in a camper at Yellow Creek State Park in Indiana County while working on a pipeline project in the region.

“I believe it was work-related reasons or to get something to eat,” Alejos said. “I can’t recall exactly what happened.”

During cross-examination, pictures of Alejos’ body taken at the Adams Township Municipal Building by police officers came into question, notably because of scrapes on Alejos’ shins.

The Houston man told the defense that he knew that he had injured his back, but didn’t remember other injuries from that night.

Alejos said during a redirect examination that he and Turner have stopped speaking since the incident.

Pennsylvania State Police Cpl. Adam Hooks, the accident reconstruction specialist who was called to the scene on May 31, told prosecutors that the injuries sustained by Turner – multiple “high-energy” fractures to his right foot according to post-accident medical records – were consistent with the damage to the Dodge, which had a severely displaced front axle that pushed the driver’s-side wheel into the floorboard, causing it to impact the pedals.

Information extracted from the Dodge’s airbag control module showed that the brake pedal on the pickup had not been depressed and that the gas pedal was in use up until .2 seconds before the airbag deployed.

Hooks said that under normal circumstances, it takes about 1.6 seconds to identify and react to a road hazard, verifying that an impaired driver would need longer to process a similar scenario.

Turner’s blood alcohol concentration was allegedly measured at .248% after the crash, more than three times the legal limit of .08%.

Alejos had a blood alcohol concentration that was allegedly measured at .199% after the crash.

While his testimony was unable to pinpoint who got behind the wheel of the pickup truck, Adams Township police Officer John Heming showed video footage to jurors that supports the prosecution’s claim that Turner lied to authorities when he said that a designated driver had fled the scene of the fatal wreck when questioned.

During Heming’s time on the stand, the prosecution showed videos featuring surveillance footage from multiple cameras at Quaker Steak & Lube, showing Turner and Alejos entering at approximately 7:13 p.m. on May 30, according to the video’s timestamp. Clips of the two at a table inside the restaurant – and also at the bar with their site foreman – were shown with Alejos holding a credit card in his hand, while Turner held what Heming identified as an ignition key.

Alejos was shown leaving the bar area at approximately 11:33 p.m. on the video’s timestamp, approximately 10 minutes before Turner left. A clip of Alejos situated at the site’s outdoor bar showed him smoking a cigarette, looking inside to the indoor bar and demonstratively attempting to get the attention of someone inside, presumably Turner.

Alejos is then seen heading to the parking lot a few steps behind a Quaker Steak employee, identified as Chelsea Gipe, then known as Chelsea Brewer, who had just clocked out and was headed to her vehicle parked near the Dodge pickup. A video from the Sheetz convenience store on Scalp Avenue overlooking an access road where Brewer’s and Turner’s vehicles were parked was shown.

While the distant video didn’t clear up who had driven the car out of the lot that night, it did show that a third person did not enter the vehicle from the time that Alejos approached it to the time that Turner exited the restaurant.

PennDOT videos displayed to the jury depicted what Heming identified as the blue Dodge Ram exiting from Scalp Avenue onto Route 219 North.

The defense will cross-examine Heming to open Day 3 of the trial on Thursday.

Gipe affirmed that it was her vehicle parked near the blue Dodge that evening. Gipe and then-Quaker Steak front-of-house manager Mark Cannady Jr. separately testified that they remembered Turner and Alejos at the establishment that evening.

Pittsburgh-based biomechanist Andrew Rentschler told jurors Thursday that he believes that Chase Edward Turner, 30, was the driver of the 2009 Dodge Ram pickup truck that police say was responsible for a wrong-way collision on U.S. Route 219 that took the life of Olivia C. Red on May 31, 2018.