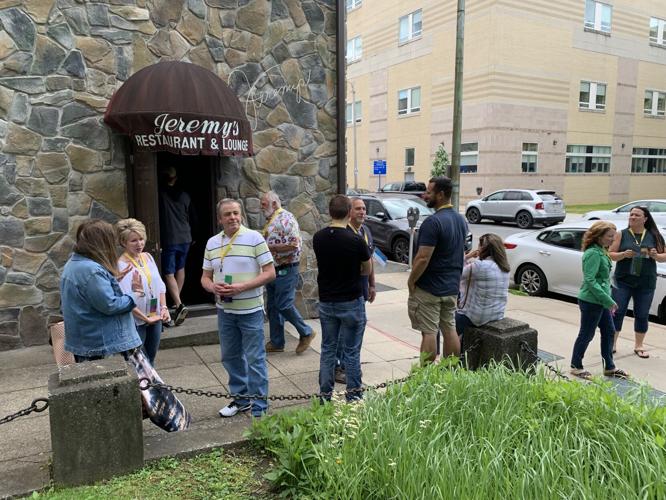 A crowd of Discover Downtown Johnstown Partnership Taste and Tour participants stop at Jeremy's Restaurant and Lounge on Saturday, May 28, 2022. 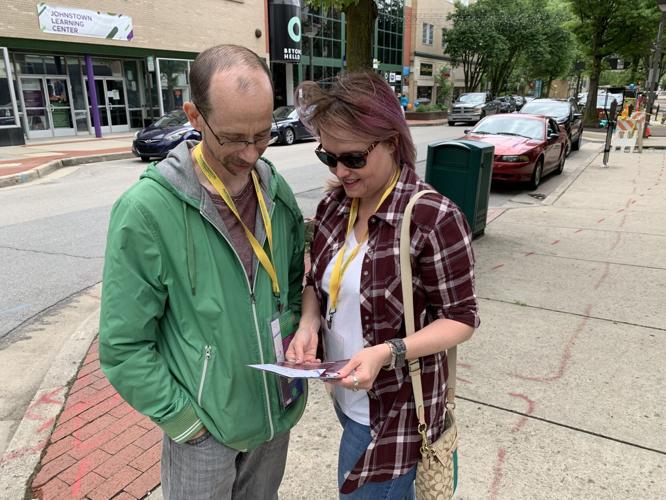 Ron Gmys and his wife Stacy Bartlebaugh-Gmys examine the Discover Downtown Johnstown Partnership Taste and Tour map on Saturday, May 28, 2022.

A crowd of Discover Downtown Johnstown Partnership Taste and Tour participants stop at Jeremy's Restaurant and Lounge on Saturday, May 28, 2022.

Ron Gmys and his wife Stacy Bartlebaugh-Gmys examine the Discover Downtown Johnstown Partnership Taste and Tour map on Saturday, May 28, 2022.

“It’s nice to get together with family and friends and go check out businesses you’ve never seen before,” area resident Steve Urban said.

He and his wife, Amy, have attended several of the previous Taste & Tour events, hosted by the Discover Downtown Johnstown Partnership, but missed out in 2021.

The pair said it’s fun to get out and explore the downtown area. Amy Urban added that she’s noticed new stores open now that weren’t there in past years.

Justice Michlena, a Johnstown native now residing in Virginia, said he likes Taste & Tour because it gives him a chance to run into people he hasn’t seen in a while while simultaneously exploring the stores and restaurants in Johnstown.

This is the pair’s second tour. Demet Michlena said they’ve been looking forward to it since the last time they were in town.

Taste & Tour participants registered at the Holiday Inn Johnstown-Downtown before setting off onto city streets, where they could visit the 40 participating businesses until 8 p.m.

Visitors were split into four starting zones around town and got to explore at their own pace without a set route. If they collected four stamps in each zone on their maps, then they qualified to win the grand prize, which included more than $2,000 worth of prizes from local businesses.

Each of the participating city stores and restaurants featured a variety of offerings Saturday for their Taste & Tour guests, such as special pricing, food samples, live music and more.

“The idea is to get people downtown,” event co-chair Doug Puchko said.

There were 700 tickets sold in about two hours this year. In 2021, it took around 12 hours to sell out. Tickets were available for a month before they were all gone in 2020, Puchko said.

Michelle St. Clair and her daughter, Laura, were looking forward to getting out and seeing what Johnstown has to offer.

“We just like all of it,” Michelle St. Clair said.

The pair had their eyes on the new Main Street clothing store, Elevate, and also wanted to stop at Flood City Cafe.

AJ Eutin, Elevate co-owner, was thrilled to participate for the first time in the event. The store opened earlier this year. Prior to the 4 p.m. start time, she was putting the finishing touches on the store, including setting up a photo booth.

“I’m just excited and waiting for the people to show up,” Eutin said.

She spoke highly about the concept of Taste & Tour and wants to see it expanded to a second day or separate event later in the year.

“It’s a great way for people unfamiliar to town or new to town to discover new businesses, along with businesses that have been here for years and everything downtown has to offer,” Eutin said.

Stacy Bartlebaugh-Gmys and Ron Gmys, of Pittsburgh, were impressed with the numerous offerings.

Bartlebaugh-Gmys is an area native and said she remembers when there was little available in downtown Johnstown. As she and her husband examined the map of participating businesses, they were happy to see so much development in the city.