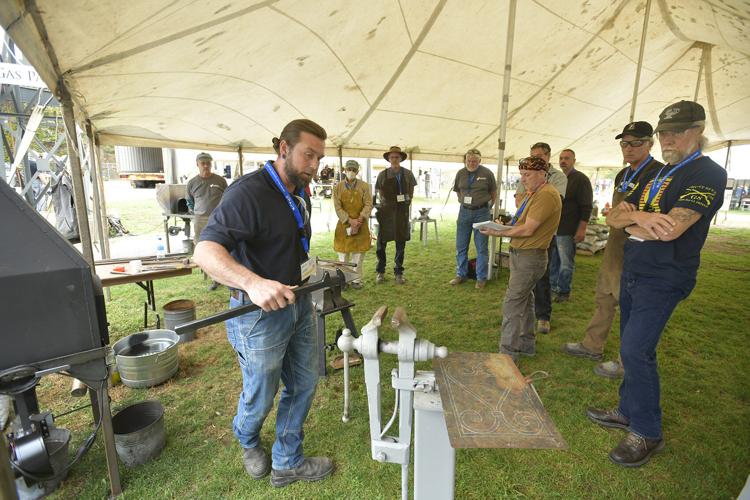 Blacksmith teacher John Williams of California teaches a class at the Iron to Arts Festival at Peoples Natural Gas Park in Johnstown on Thursday, Oct. 14, 2021. 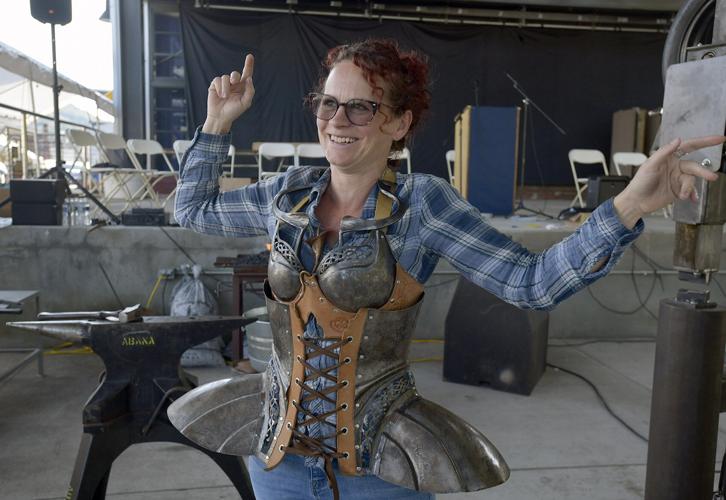 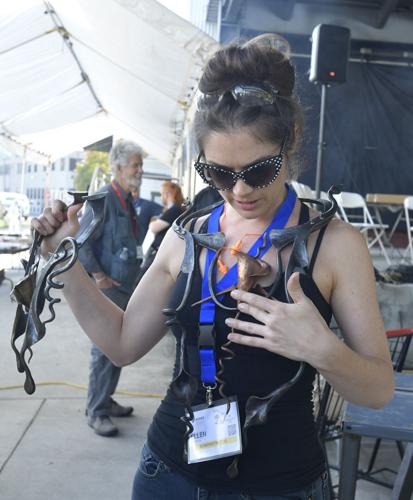 Blacksmith forges fashion artist Ellan Durkan shows off her artwork on Thursday, October 14, 2021 at the Iron to Arts Festival.

Blacksmith teacher John Williams of California teaches a class at the Iron to Arts Festival at Peoples Natural Gas Park in Johnstown on Thursday, Oct. 14, 2021.

Blacksmith forges fashion artist Ellan Durkan shows off her artwork on Thursday, October 14, 2021 at the Iron to Arts Festival.

JOHNSTOWN, Pa. – There’s a definite “Forged in Fire” feel to the Artist-Blacksmith’s Association of North America’s inaugural Iron to Art festival this weekend in Johnstown.

Many newer blacksmiths have been inspired by the History reality television show, in which bladesmiths re-create historical edged weapons that are judged against each other in tests, such as slicing through animal carcass slices and chopping wood blocks.

Many of the people who attend the festival Saturday, the only day the event at Peoples Natural Gas Park is open to the public from 9 a.m. until after 8 p.m., will have had their interest piqued by what they saw on TV.

“That (show) really has changed the scope and the interest in blacksmithing,” ABANA President Leigh Morrell said.

Doug Hayes, owner of Iron Osprey Designs in St. Augustine, Florida, knows there is a group of people drawn to blacksmithing because of “Forged in Fire,” so he has pictures ready to show how he transformed a horseshoe rasp into a blade, something that seems like a challenge right out of the program.

“A lot of guys like it,” Hayes said. “For me, kind of what I like are the guys that come into the shop wanting to do that, and they’re like, ‘Wow, there’s so much more to this than I thought,’ then they get into that.”

The show has a theatrical aspect with a countdown clock, head-to-head competition and, of course, the moment when contestants quench their blades to turn them into hardened metal – an act that often results in a fireball coming out of the liquid.

But demonstrators at the festival also want to teach attendees about the other aspects of metalwork.

For example, the Patient Order of Meticulous Metalsmiths makes finely detailed items, using small tools – a much different approach than the image of muscular young men swinging hammers in a fiery forge.

Carl Close Jr., a POMM member, said he hopes local folks who attend the event on Saturday “come away that things are a little different than what they might see on television.”

“A lot of people are familiar with different shows that are on now,” Close said. “There’s a lot of misconceptions about blacksmithing – what it is and what it isn’t. Hopefully they’ll learn that it’s a fine art, and it can be very intricate and it takes a lot of work to do. It takes many years of skill. But you could also start out and have a year’s experience and you could still do some really fun stuff.”

Brad Gray, from Snyder County, and Brian LeGrand, a Delaware resident, have been blacksmithing since long before “Forged in Fire” brought in a new generation of enthusiasts. Both celebrate the rich history of the work, using techniques that have been passed down through generations.

“I love making things, making them as close as I can to the old style, old ways, learning from the masters here,” LeGrand said. “It’s very important to me not to lose the traditional arts that we experience here because if we let that go, it’s gone.”

Gray hopes people at the festival will gain an understanding and appreciation for the hands-on skills used in blacksmithing.

“Anything that you do that comes out of your own hands and mind and fingers, I think, is more pleasurable than picking it up off the shelf and picking it out of a stamper or something like that,” Gray said. “It’s just a different aspect.

“We wouldn’t be here at this time if there wasn’t the ability to turn things out by the thousands a minute. We would never get here. But, at the same time, being able to do things and put your mark on it is the difference of buying a prebuilt box dresser from Ikea or somebody else versus just making it yourself.”

'A fun, head-clearing experience': Tribune-Democrat reporter gets up-close look at the craft of blacksmithing

I sat down to dinner a little after 9 p.m. Thursday – salad, rice, a cold IPA and a medium-rare, Montreal-seasoned, mushroom-covered sirloin that I had grilled using my very own brand-new, handmade steak turner.