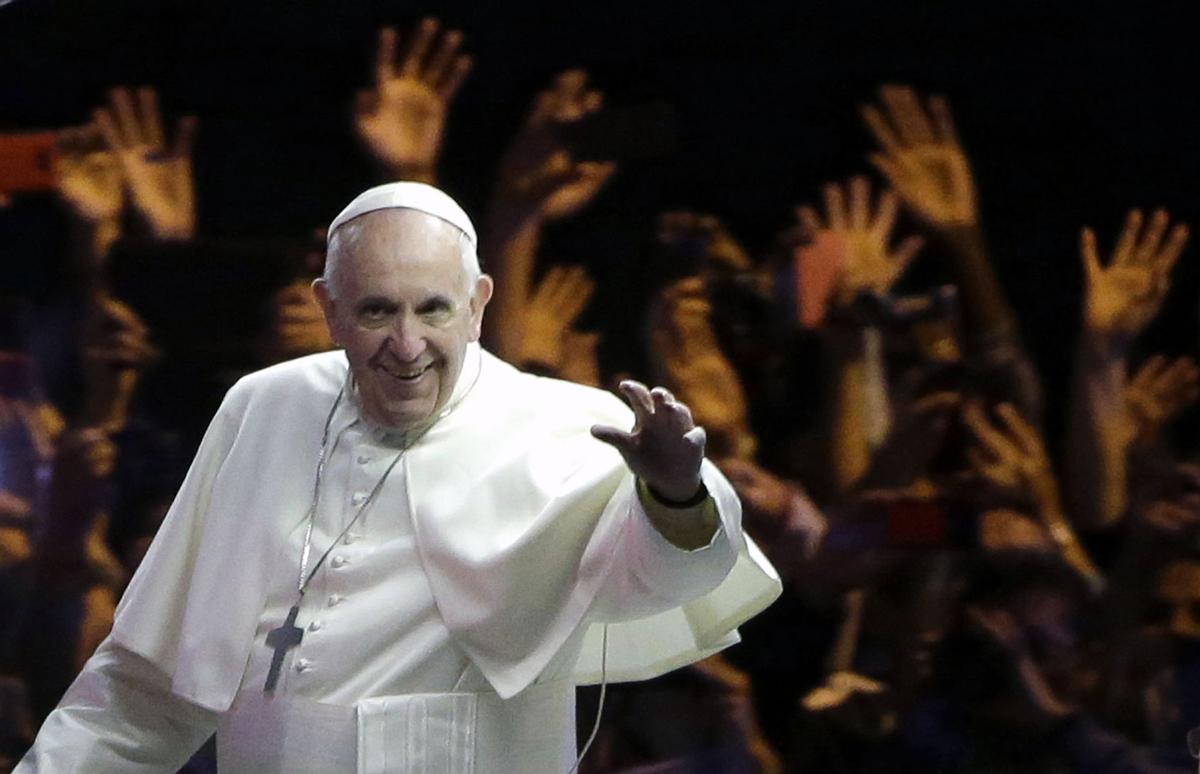 Pope Francis waves to the crowd during a parade Saturday, Sept. 26, 2015, in Philadelphia. The pontiff attended a music-and-prayer festival there Saturday night to close out the World Meeting of Families, a Vatican-sponsored conference of more than 18,000 people from around the world. 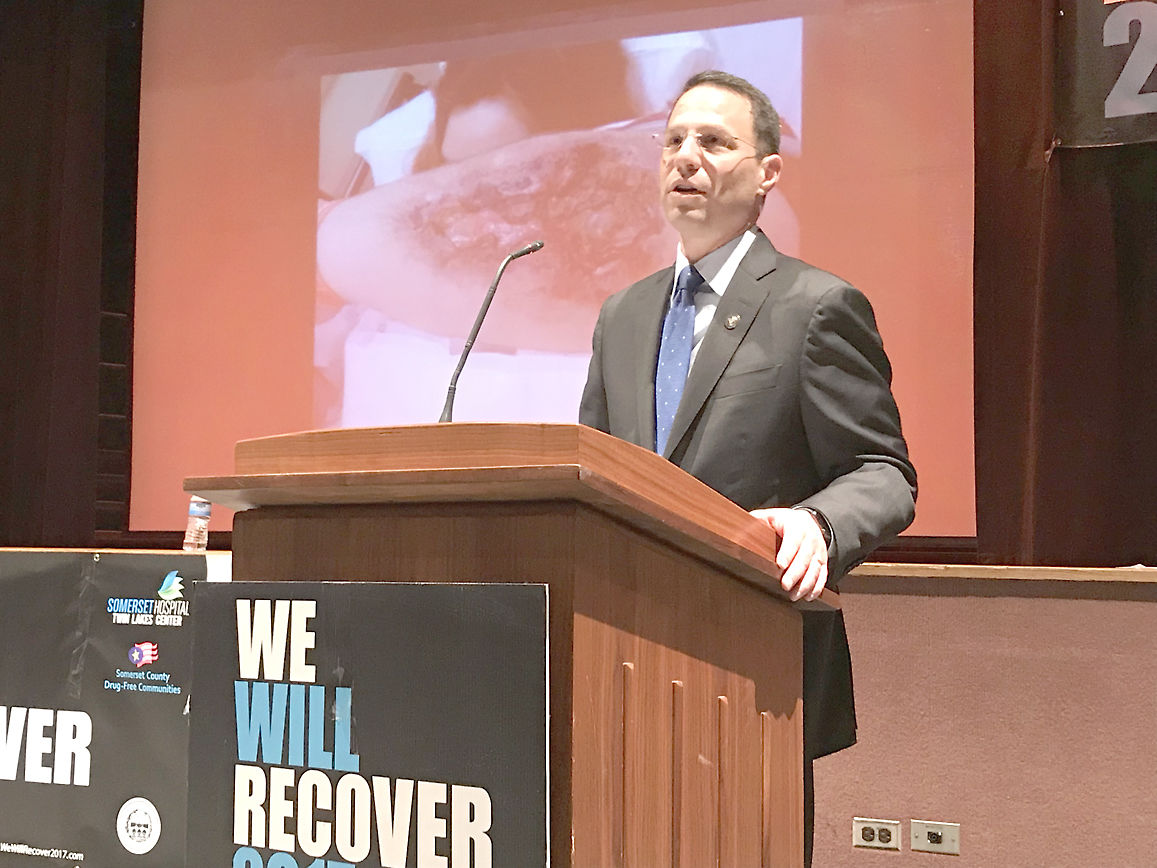 Pennsylvania Attorney General Josh Shapiro speaks Tuesday, May 8, 2018, during a We Will Recover addiction event at Somerset Area High School. 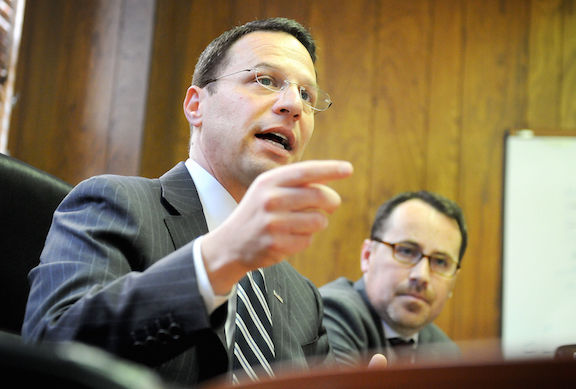 Pennsylvania Attorney General Josh Shapiro (left) gestures during an April 2017 interview at The Tribune-Democrat in Johnstown. David Wade, the AG's director of policy and planning, is looking on in the background.

Pennsylvania Attorney General Josh Shapiro has appealed to the highest level of the Catholic Church in his attempt to get the Supreme Court of Pennsylvania to allow the release of an almost 900-page grand jury report that is believed to contain details about years of clergy sexual abuse and cover-up within six of the commonwealth’s dioceses.

Shapiro’s office prepared a letter to the Vatican after conducting interviews and research into the Allentown, Scranton, Erie, Pittsburgh, Greensburg and Harrisburg dioceses in a proceeding overseen by Cambria County President Judge Norman Krumenacker III. 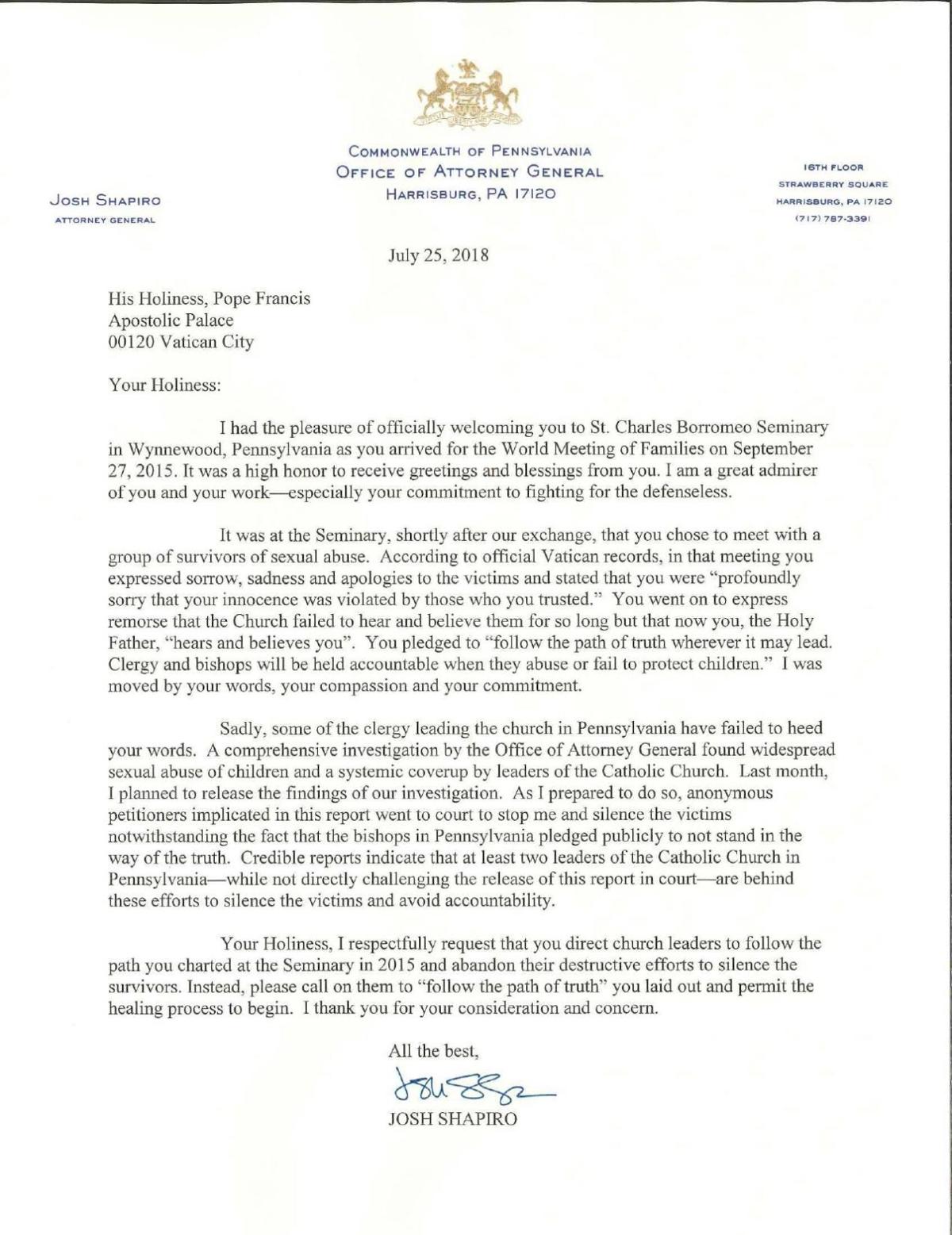 Officials in the dioceses have publicly supported its release.

However, in June, the high court stopped the report’s release after “many individuals” mentioned in the document raised concerns about possible damage to their reputations if the findings become public.

On Wednesday, Shapiro sent a letter to Pope Francis in which he wrote: “Credible reports indicate that at least two leaders of the Catholic Church in Pennsylvania – while not directly challenging the release of this report in court – are behind these efforts to silence the victims and avoid accountability.”

The attorney general said his office’s “comprehensive investigation” into the dioceses “found widespread sexual abuse of children and a systemic coverup by leaders of the Catholic Church.”

Pennsylvania Attorney General Josh Shapiro speaks Tuesday, May 8, 2018, during a We Will Recover addiction event at Somerset Area High School.

Shapiro recalled a meeting he had with Pope Francis at the St. Charles Borromeo Seminary in suburban Philadelphia in 2015, shortly before the pontiff talked with abuse victims and said he intended to “follow the path of truth wherever it may lead.” The attorney general, in his letter, called on the pontiff to honor that pledge and ask church leaders to “abandon their destructive efforts to silence the survivors.”

Westmont resident Shaun Dougherty, an advocate for survivors of clergy abuse, expressed mixed emotions about Shapiro feeling the need to write the letter.

“It’s just another sign of Josh’s continued support to protecting the kids in Pennsylvania,” Dougherty said. “On one hand, it’s awesome that he wrote the letter. On the other hand, how sad is it that the attorney general of Pennsylvania had to write a letter to the pope to try to get the pope to intervene to release the report?”

Richard Serbin, a Blair County attorney who has represented survivors of abuse for decades, called the letter part of what has been a series of “events that are unique in recent history,” including the statewide investigation and the blocking of the report’s release by the court. Serbin is unsure of what effect the letter will have.

“I think there’s a great deal of pressure for the release of the report,” Serbin said. “I think the public is demanding it, but I am also concerned, as I have learned through over 30 years of dealing with child sex abuse within the Catholic Church, that the church is all-powerful. And their tentacles of power go into the judiciary, they go into district attorneys’ offices, they go into police departments, and they go into newspapers.”

Bob Hoatson, co-founder of Road to Recovery, an organization that assists victims of clergy abuse, described Shapiro’s letter to the pope as “unprecedented.”

“I haven’t heard of it before,” Hoatson said. “I think it’s courageous on the part of the attorney general to reach out, because it’s clear that priests, especially groups of priests, are being obstructionists now to the report. It’s not a matter of justice for them. It’s really to keep a lid on the accusations of the allegations, which is typical church.”

Mitchell Garabedian, a nationally prominent attorney who represents victims of clergy sexual abuse, feels the pontiff “can express the morality of the Catholic Church and his concern” by supporting the release of the report.

“This is a very powerful moment for Pope Francis,” Garabedian said.

Garabedian, Dougherty, Hoatson and Serbin have been involved in the issue of clergy sexual abuse in Pennsylvania for years, including when the attorney general’s office released a report in 2016 that exposed a decades-long cover-up within the Roman Catholic Diocese of Altoona-Johnstown, allegedly carried out under the supervision of former Bishops Joseph Adamec and James Hogan.

That investigation led to the AG’s office looking into the other six dioceses mentioned in the current grand jury report.

Previous investigations had exposed abuse cover-ups within the Roman Catholic Archdiocese of Philadelphia.

A Cambria County judge ruled Friday that a redacted brief filed by the state attorney general's office regarding a grand jury investigation into child sexual abuse within six Pennsylvania Roman Catholic dioceses can be made public.