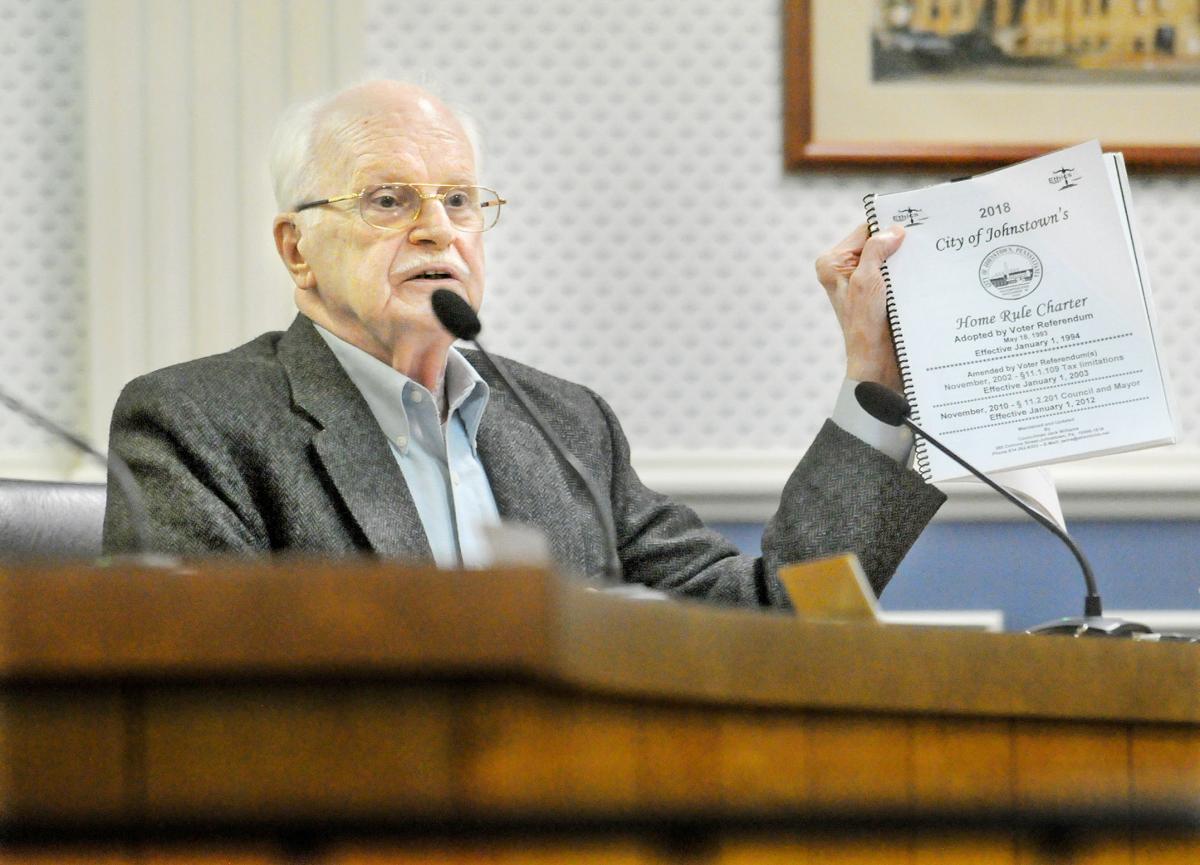 Johnstown City Councilman Jack Williams holds up a copy of the city’s Home Rule Charter during a special meeting Monday, January 7, 2019, in council chambers in the Public Safety Building. 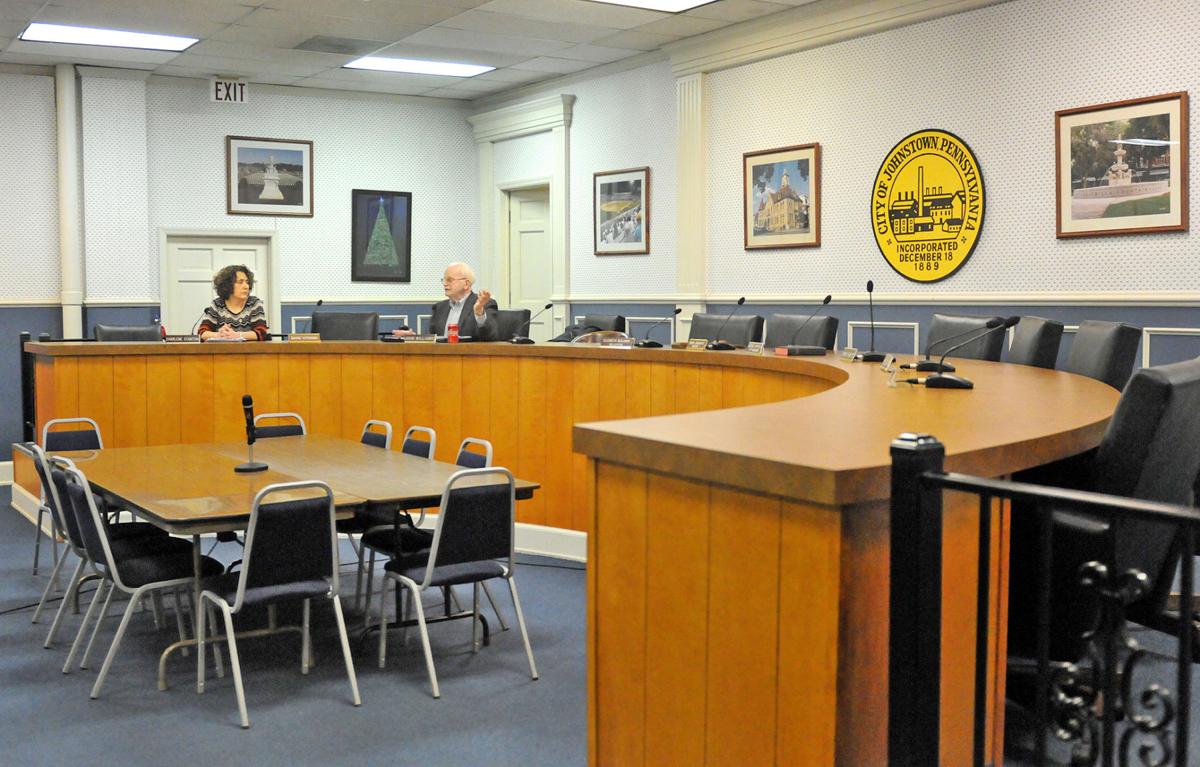 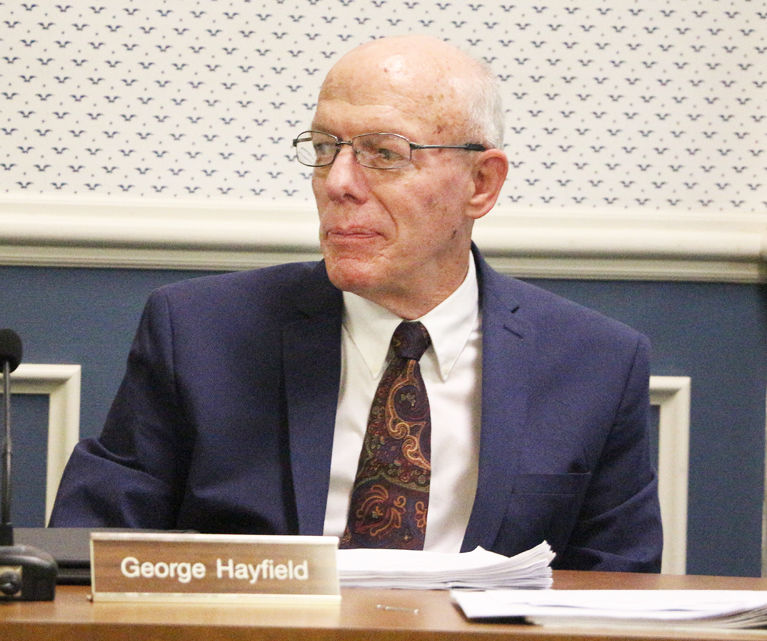 Johnstown City Councilman Jack Williams holds up a copy of the city’s Home Rule Charter during a special meeting Monday, January 7, 2019, in council chambers in the Public Safety Building.

No quorum was present during Monday’s special Johnstown City Council meeting that was scheduled in order to discuss a resolution that called for the resignation or dismissal of City Manager George Hayfield.

Charlene Stanton and Jack Williams requested the meeting because they feel Hayfield did not get proper approval from City Council to appoint an acting city manager during his recent holiday season vacation. The city’s Home Rule Charter states “At any time the City Manager is unable to perform the duties of that office, whether because of absence or disability, he or she may delegate such authority to another Municipal employee, subject to prior approval by Council.”

Hayfield was off work from Dec. 22 through Jan. 1 – a period during which he used four vacation days – and, for a time, visited the Poconos.

Before his departure, Hayfield informed Mayor Frank Janakovic about his plans and explained that Finance Director Robert Ritter would be in charge. But the full City Council was not notified until a special meeting on Dec. 27.

“The city manager going on vacation, that’s all fine and well,” Stanton said during an interview after the meeting did not take place. “Anybody is entitled to a vacation. But where the problem comes in is that he appointed the finance director to be acting city manager, which he can do that, but that is subject to prior council approval. The prior council approval never happened. That’s a clear violation of the Home Rule Charter.”

Hayfield feels he did not need to get permission from council because “may delegate” is not the same as a requirement. He called the meeting a “political stunt” in an interview last week.

Williams responded with a yet-to-be-published letter to the editor, sent to The Tribune-Democrat, in which he wrote: “Sorry George, not a political stunt, but demanding that Home Rule Law prevails, and is not discretionary.”

In the letter, Williams pointed out a previous 2017 resolution when a city manager sought council approval to designate an acting city manager. That ordinance, which appointed then-Community and Economic Development Department Director Renee Daly as the acting city manager in the absence of the full-time city manager, has expired.

Williams also questioned why Hayfield went on vacation when the 2019 budget has not been finalized.

“I have no problem with Mr. Hayfield going on vacation,” Williams said during an interview. “As I stated earlier, I would question him deciding to go when there is no 2019 budget in place.”

Janakovic, Deputy Mayor Marie Mock, Dave Vitovich, Ricky Britt and Rev. Sylvia King did not attend the meeting. Janakovic called the meeting and resolution a “ploy to create a sense of chaos” and gain “notoriety” for Stanton and Williams.

“It’s unfortunate that the other five members of council do not see the problem of not complying with the Home Rule Charter,” Stanton said.

King does not think a special meeting is the proper forum to discuss the issue. “I am not attending tonight’s meeting because there is only one item on the agenda, and I feel that personnel matters should not be aired in the public, period,” King said beforehand.

During a telephone interview, prior to the meeting, Britt said, “The reason I’m not going is because I think it’s very vicious – I can’t think of a stronger word for it, so I’m going to use the word ‘vicious’ – by those people that are proposing the firing or asking for the resignation for this gentleman, our city manager.”

Mock feels the special meeting is a pattern of conflict Williams and Stanton have had with city managers, including Melissa Komar, whose credentials to hold the position they successfully challenged in court, and Arch Liston.

“This whole thing was handled so unprofessionally, as usual,” Mock said. “But that’s their MO of intimidating and embarrassing city managers. Look at what they did to Melissa Komar and Arch Liston. This is pure nonsense. The city has way more important issues to deal with, but they choose to waste time, effort and taxpayer money on such trivial things.”

Tensions and conflict have been frequent among Stanton and Williams and the other five-member bloc on council.

“I’ve been around for going on 22 years,” Williams said. “I’ve served with 27 different members, persons on council. I say with regret this is the worst makeup, members of the city governing body that I’ve been associated with.”

Williams and Stanton plan to introduce the proposed resolution at council’s next regular meeting on Jan. 16, but they do not expect Hayfield to be resign or be removed, which could open the possibility of legal action.

“I guess a court case is always a possibility,” Stanton said. “But it’s a shame that you have to keep going to the Cambria County Courthouse to get council and the city to simply comply with the Home Rule Charter, which is the law.”

Response from the community has been divided.

Mark Pasquerilla, a prominent local business leader and supporter of Janakovic, called the proposal to terminate Hayfield “a continuing attempt by Williams and Stanton to hurt our community’s image and to create an environment that’s not conducive to investment.”

Facebook feedback to The Tribune-Democrat’s preview story about the meeting, which ran on Sunday, included a comment from Sean Rovan, who wrote: “I like that those 2 keep council in check. If they didn’t the council would try to get away with anything they could.”

Another reader, Michelle Babik Beblar said, “This is such an unnecessary waste of time. So much money has been wasted on endless lawsuits which could have been earmarked for many uses in the city. The time has come for Williams and Stanton to resign.”

Matt Stufft commented about the general state of city government, posting: “Johnstown needs to wipe the slate clean in council. The positive changes that have occurred have so in spite of the city government. It’s time residents take back this city and fix it. Elect people who honestly want to make a difference and turn this city around.”

A resolution calling for the resignation or dismissal of Johnstown City Manager George Hayfield was withdrawn during City Council’s regular monthly meeting on Wednesday.