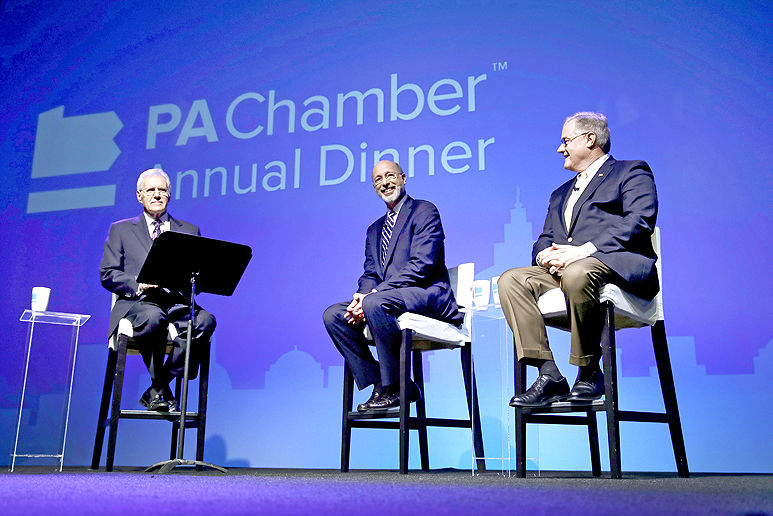 Democratic Pennsylvania Governor Tom Wolf, on the left, will face off against Republican candidate Scott Wagner, on the right, for the position.

Democratic Pennsylvania Governor Tom Wolf, on the left, will face off against Republican candidate Scott Wagner, on the right, for the position.

HARRISBURG – In 2014, fewer than 43 percent of registered voters in the state went to the polls on midterm Election Day as Pennsylvanians bounced an incumbent governor from office for the first time in history.

Contrast that to 2016, when 70 percent of voters headed to the polls in Pennsylvania.

In 2014, Democrat Tom Wolf was elected governor with 1.9 million votes, compared to the 1.58 million votes cast for former incumbent Tom Corbett, a Republican.

Pulse of the voters logo

This is the third installment of a CNHI local and national reporting project, “Pulse Of The Voters.” The Tribune-Democrat interviewed several local voters, both Republicans and Democrats. Readers are urged to add their thoughts and reactions by posting comments on our Facebook page, writing letters to the Readers’ Forum or sharing thoughts on social media with the hashtag #PulseOfTheVoters. We’ll include some of your comments in future reports.

In 2016, Hillary Clinton got 1 million more votes than Wolf did two years earlier – and still lost in Pennsylvania to Donald Trump, who beat her by 44,000 votes in the state.

Wolf is seeking re-election, opposed this time by former Republican state Sen. Scott Wagner. The governor’s race has done little to attract attention, with the incumbent comfortably ahead in most polls. However, there’s much that makes this year’s midterm election more compelling to voters, party officials and others said.

For one thing, voters across the state head to the polls for Congressional races in districts redrawn by the state Supreme Court. The justices earlier this year found that the old congressional maps were illegally gerrymandered and, after rejecting the Legislature’s attempt at redoing the map, released their own version.

The new map creates a number of more competitive districts.

Under the old maps, even though Democrats outnumber Republicans by more than 800,000 people statewide, Republicans held 13 of the state’s 18 congressional seats.

Many polls project that under the new maps, the state could end up with a 9-9 split, particularly if there is a Democratic wave.

Gender is another factor that had already emerged as a potentially important issue in the election that has only grown more prominent as the year has gone on.

In December, Gov. Tom Wolf vetoed a bill passed by the Republican-controlled Legislature that would have banned abortions past 20 weeks. And while legislation was introduced earlier this year to revamp the way sexual harassment complaints against state lawmakers and other elected officials, the bill didn’t make it to a floor vote.

“Whether it’s in Washington, D.C., or Harrisburg, Pennsylvania, voters are fed up with being ignored by elected officials who only pass policies that hurt their families, their community, and their state,” said Lindsey Crete, deputy director of campaign communications for state and local campaigns for Emily’s List, a group that supports pro-choice women candidates. The group has endorsed 26 women running for the state House or Senate in Pennsylvania.

None of Pennsylvania’s current U.S. House or Senate members are women, while only about one in five members of the state Legislature is a woman.

Seven of the 18 Democrats running for Congress are women. There is one Republican woman running for Congress, Pearl Kim, who is facing Democrat Mary Scanlon in the 5th district, all but assuring that the state will have at least one female in its Congressional delegation next year.

In addition, 118 women are running for seats in the state Legislature.

Party officials from both sides said they believe there has been a spike in voter enthusiasm for this year’s midterm elections.

Those hearings “exposed voters to the reality of what the left is – obstructionists who move the goal posts,” he said.

The party’s candidates up and down the ticket stand to benefit from the enthusiasm of voters. And they are also counting on the influence Trump holds among supporters.

The president returned to Pennsylvania recently with a rally in Erie.

Trump has been making the case to voters that they need to support Republican candidates to help the Trump administration achieve its goals, Gottesman said.

There are indications that voters across the political spectrum are engaged.

With the 11th-hour additions, the state now has just under 4.08 million Democrats and just over 3.25 million Republicans.

That’s a smaller margin than existed in 2016 when Trump won Pennsylvania on his way to taking the presidential election.

“We are not resting on voter registration numbers alone,” said Brandon Cwalina, a spokesman for the state Democratic Party. “We are going to work hard every day from now until November to knock on doors, make phone calls, recruit volunteers and encourage Pennsylvanians to show up to the polls and vote for Democrats.”

The Senate confirmation fight over Brett Kavanaugh, President Donald Trump’s nominee for the U.S. Supreme Court could be significant in mobilizing angry Democrats, said Susan David, a retired tax collector who was among the protestors. “People are much more motivated,” David said.