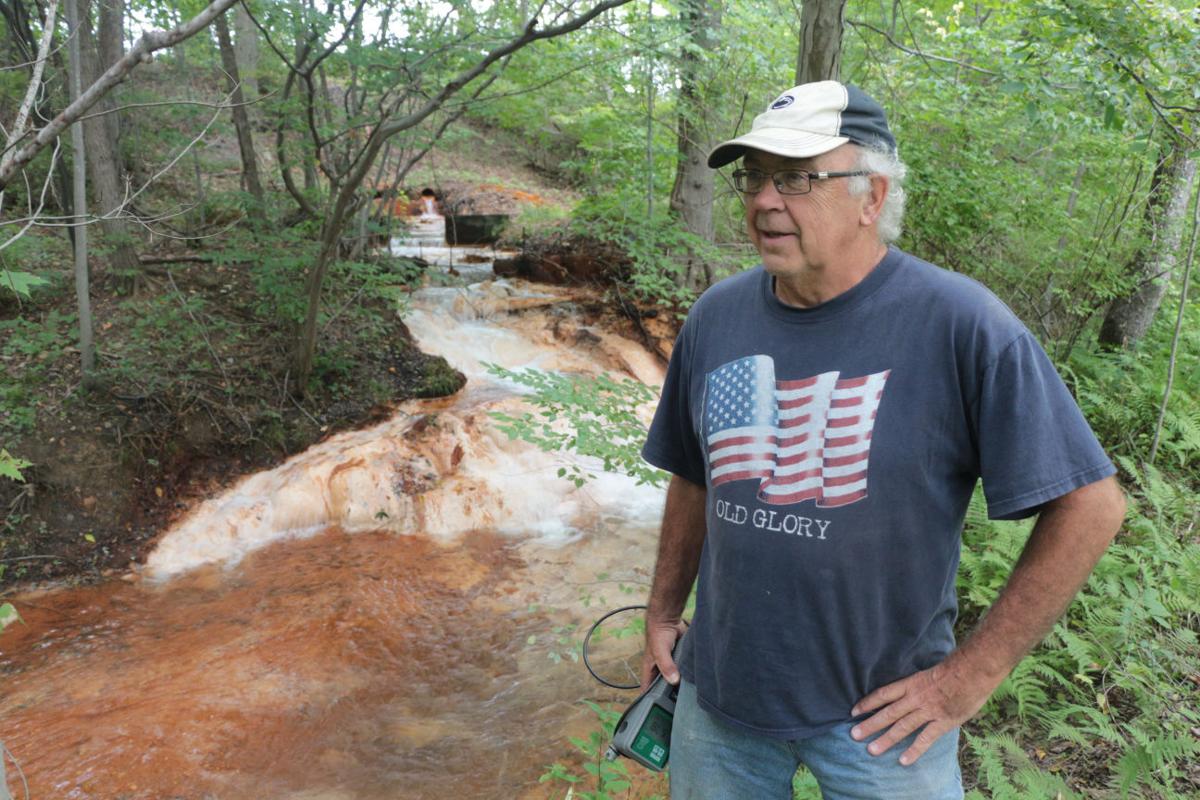 Dennis Beck checks two of three discharges from the old Sonman Mine near Portage. A retired funeral director and long-time water treatment plant consultant, Beck has been pushing for a cleanup of the Sonman mine and two other Portage area discharges polluting the Little Conemaugh River. 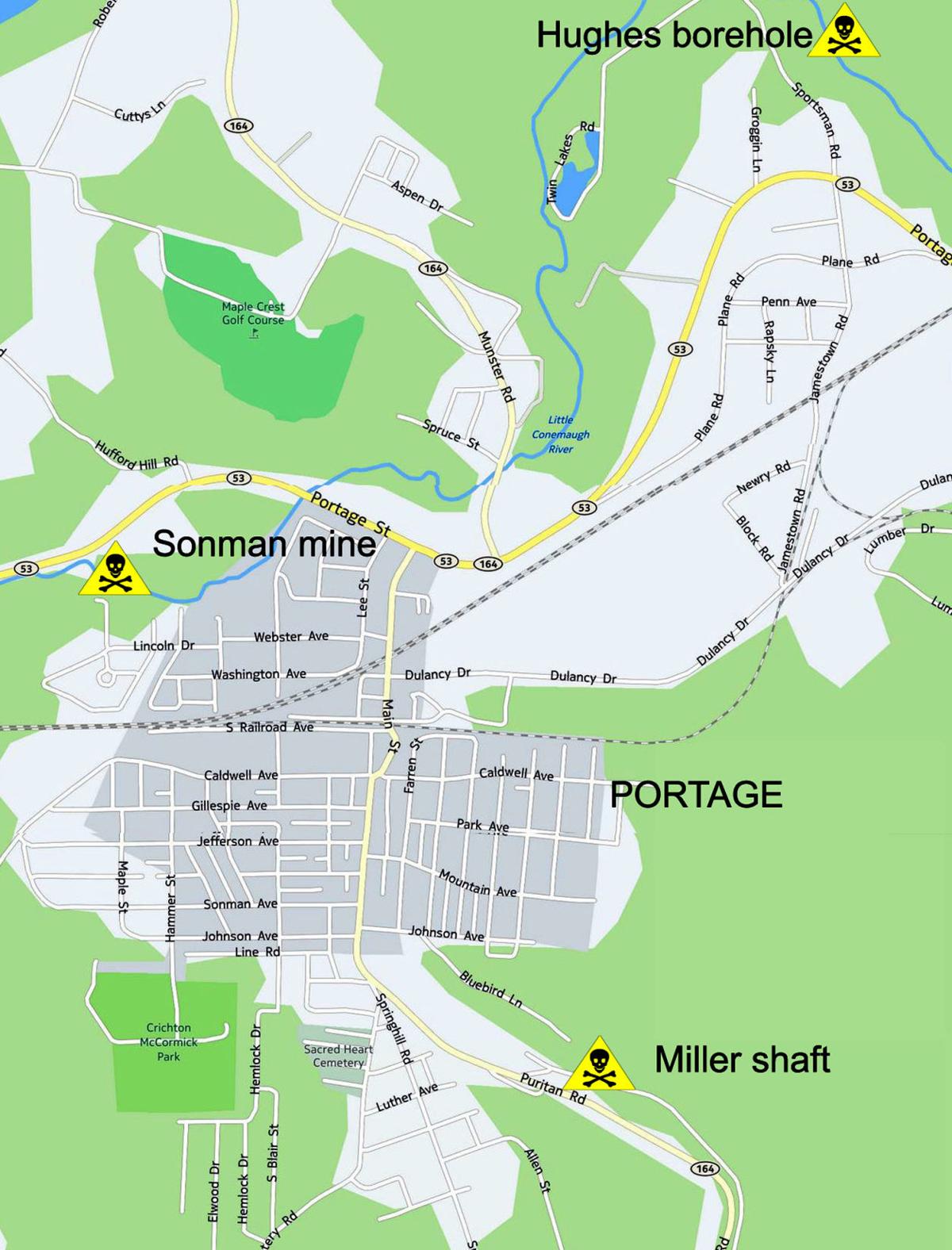 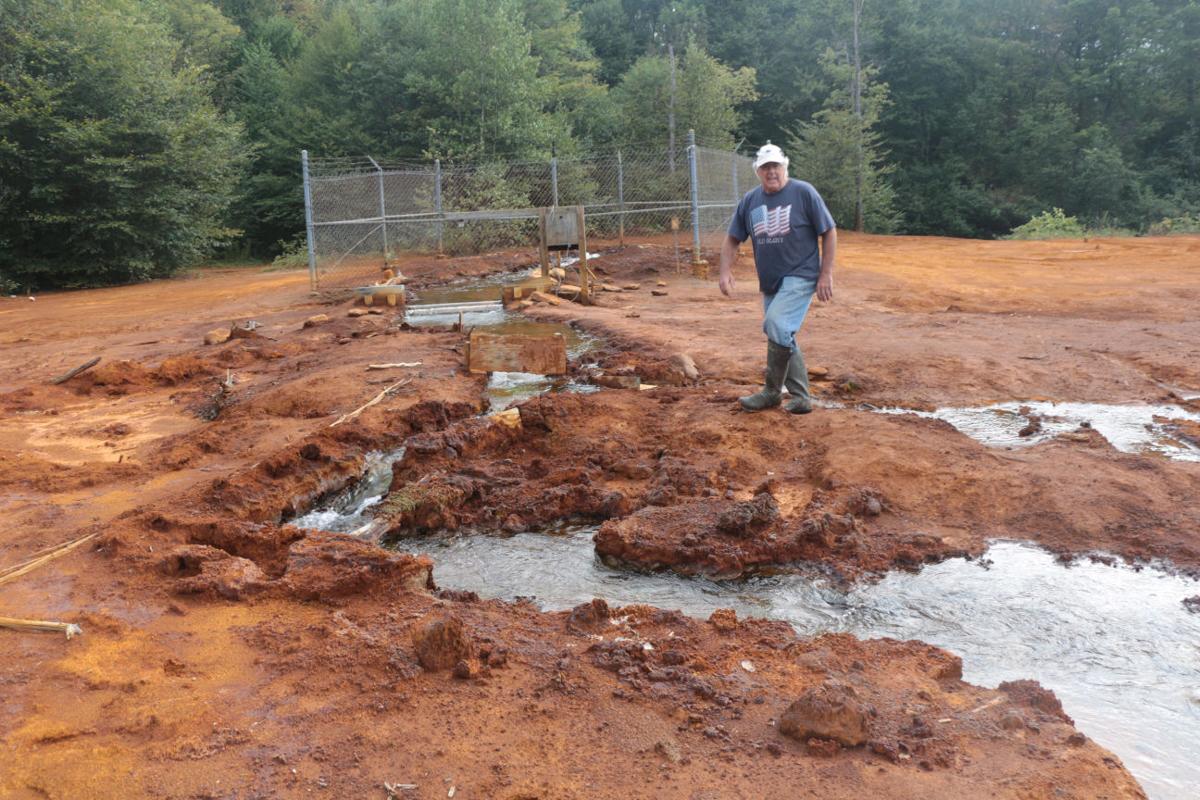 Dennis Beck visits a property destroyed by the Hughes borehole discharge near Portage. The fenced enclosure contains the borehole. 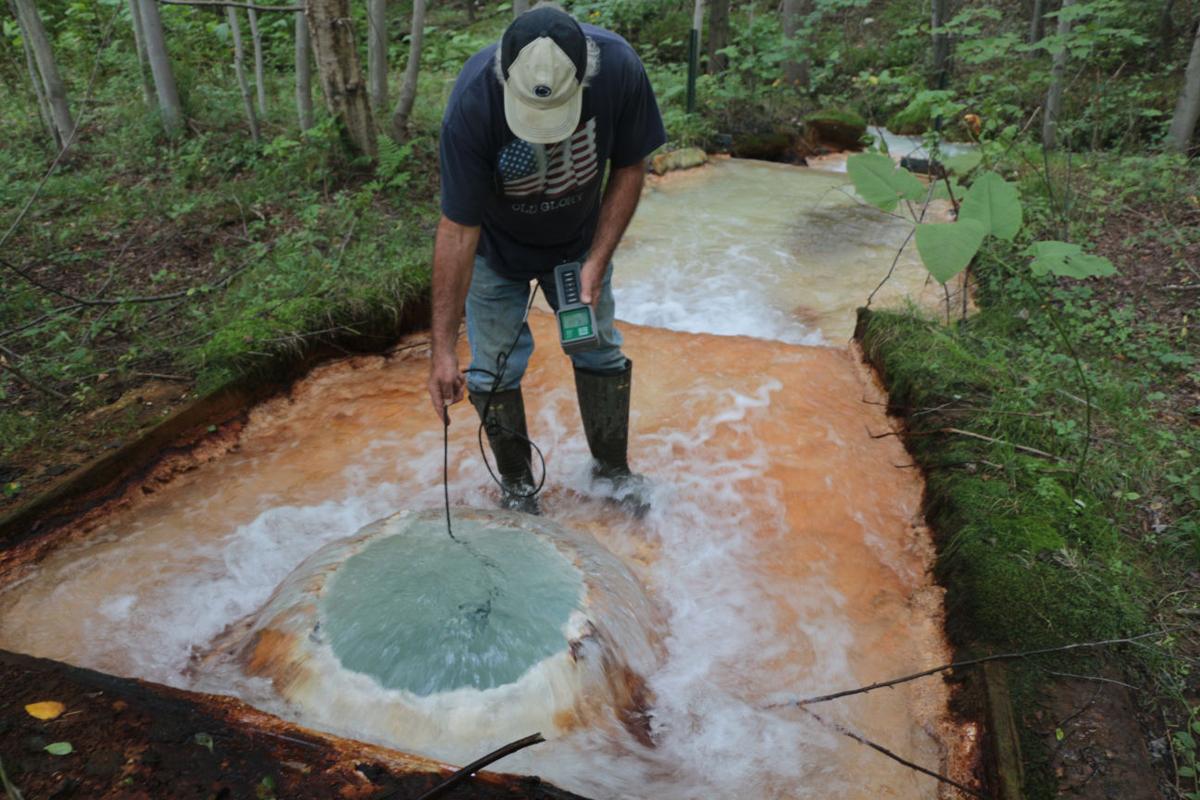 Dennis Beck checking two of three discharges from the old Sonman Mine near Portage.

Dennis Beck checks two of three discharges from the old Sonman Mine near Portage. A retired funeral director and long-time water treatment plant consultant, Beck has been pushing for a cleanup of the Sonman mine and two other Portage area discharges polluting the Little Conemaugh River.

Dennis Beck visits a property destroyed by the Hughes borehole discharge near Portage. The fenced enclosure contains the borehole.

Dennis Beck checking two of three discharges from the old Sonman Mine near Portage.

PORTAGE – After scrambling up the embankment from a drainage ditch, Dennis Beck of Portage wades into a wooden channel, lowering a probe into a gushing pipe.

The abandoned Sonman mine's borehole discharge pH level is 5.3, he announces, explaining that anything below 7.0 is considered acidic.

A retired funeral director and long-time water treatment plant consultant, Beck has been pushing for a cleanup of the Sonman mine and two other Portage area discharges polluting the Little Conemaugh River.

“If we get these cleaned up, we'll be able to fish for trout from Portage all the way to South Fork,” Beck said. “It's a beautiful stream, once we get it cleaned up.”

A member of the Cambria County Conservation District advisory board, Beck is part of a group working on plans to address all three major pollution sources with a treatment plant proposed near the Sonman borehole.

“I've been waiting 15 years for these streams to get cleaned up,” Beck said. “I see a light at the end of the tunnel. They've got a steering committee together that has done a lot of work on how much water is here, the water quality of the three discharges and the kind of plant they need to treat it.”

The plant would pump water from the Sonman mine, eliminating the major outflow from the borehole and two other spots off Route 53 between Portage and Wilmore, Leiford said. All three discharges would dry up as the underground mine pool is drained.

Plans being developed would also bring polluted water from two other nearby mines to the site, draining those mine pools and eliminating even more pollution, Leiford told council.

“Our goal is to take these three discharges and combine them into one treatment plant,” Leiford said. “This will be what we call a Tier 2 restoration.”

Beck admits it has been frustrating watching groups get help cleaning up smaller discharges while the major Portage sites were set aside due to costs.

He's encouraged to see the progress and believes it was pushed forward after the success of a similar project that eliminated nearly 30 percent of the mine-drainage pollution in the Little Conemaugh.

Funded by Rosebud Mining of Kittanning, the St. Michael treatment plant went online in 2013. By cleaning up the Topper Run discharge, the plant eliminates the main source of pollution to the South Fork of the Little Conemaugh, Timcik told council at last week's workshop.

“St. Michael was the single largest source of pollution to the Little Conemaugh,” Timcik said. “A lot of these projects wouldn’t have made a lot of sense if you don’t treat that source first.”

The Portage plant will be designed to handle mine water now spewing from the Hughes borehole near Jamestown Rod and Gun Club and the Miller Shaft discharge, which is has actually identified as flowing from an older abandoned mine above the Miller mine.

Cost of the project is estimated between $10 and $12 million, Leiford said.

Proposed funding sources include federal and state money, along with a grant from Foundation for Pennsylvania Watersheds, in association with Community Foundation for the Alleghenies.

“It would be spectacular for our community,” said Mike Kane, who serves as community foundation president and watershed foundation chairman.

“The benefit from an environmental and conservation perspective itself is evident,” Kane said. “But on the community development side, it's kind of like blight removal: You are removing an impediment to growth.”

Several details still need to be worked out before an engineering group can be hired to design the plant, Leiford told the Portage council.

“Right now, we are pointing everything at this site,” Leiford said. “If it doesn’t work out, we’d look at other sites.”

As proposed, the Portage plant would neutralize acid in the water and remove a sludge of minerals. The sludge would be re-injected through wells into mine chambers below the Sonman mine, Leiford told council.

It's crucial to get the sludge into a separate chamber to prevent re-contamination of the mine pool being treated, he said.

Water from the Hughes and Miller discharges would likely be pumped to the Portage treatment plant site through underground pipes and then pumped into the Sonman mine after the mine pool has been lowered, he explained.

The challenge is getting the water to the plant. Both Leiford and Piper stressed it is not advisable to break through barriers separating underground mines and create one single water pool.

“We've got to be able to turn off what we turn on,” Piper said.

The St. Michael plant and plans for a plant at Portage are just two examples of a community-driven effort to clean up area rivers, Piper said.

A treatment plant is also in the works for two Cresson-area streams and another is planned near Dilltown.

When it comes to the Little Conemaugh, Piper credits local advocates, including Robert Richey of Park Hill, with keeping the mission alive.

“Bob Richey is a driving force,” Piper said. “He has really lived for this.”

Richey commended the Portage group for success in getting a plan together.

“I've been working on the Little Conemaugh since 1993,” Richey said. “They are getting there. It's going to take a while.”