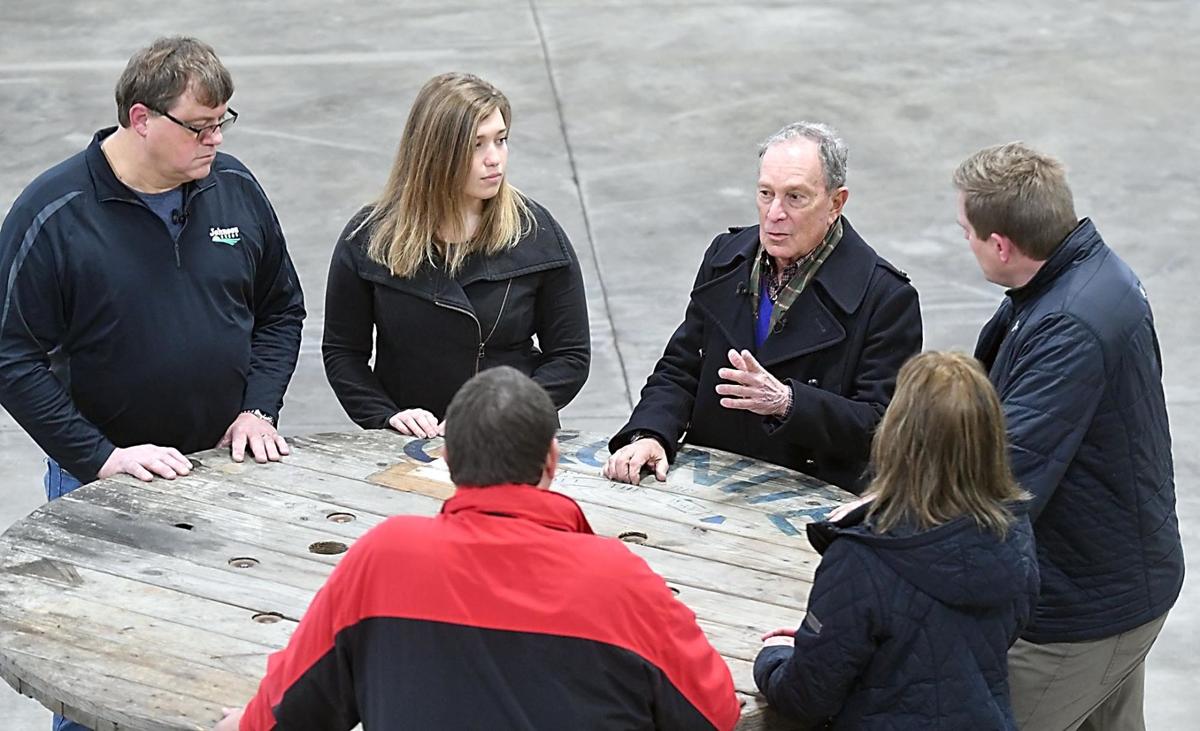 Democratic presidential candidate Michael Bloomberg answers a question while talking with the Johnson family Wednesday on their farm near Wells. 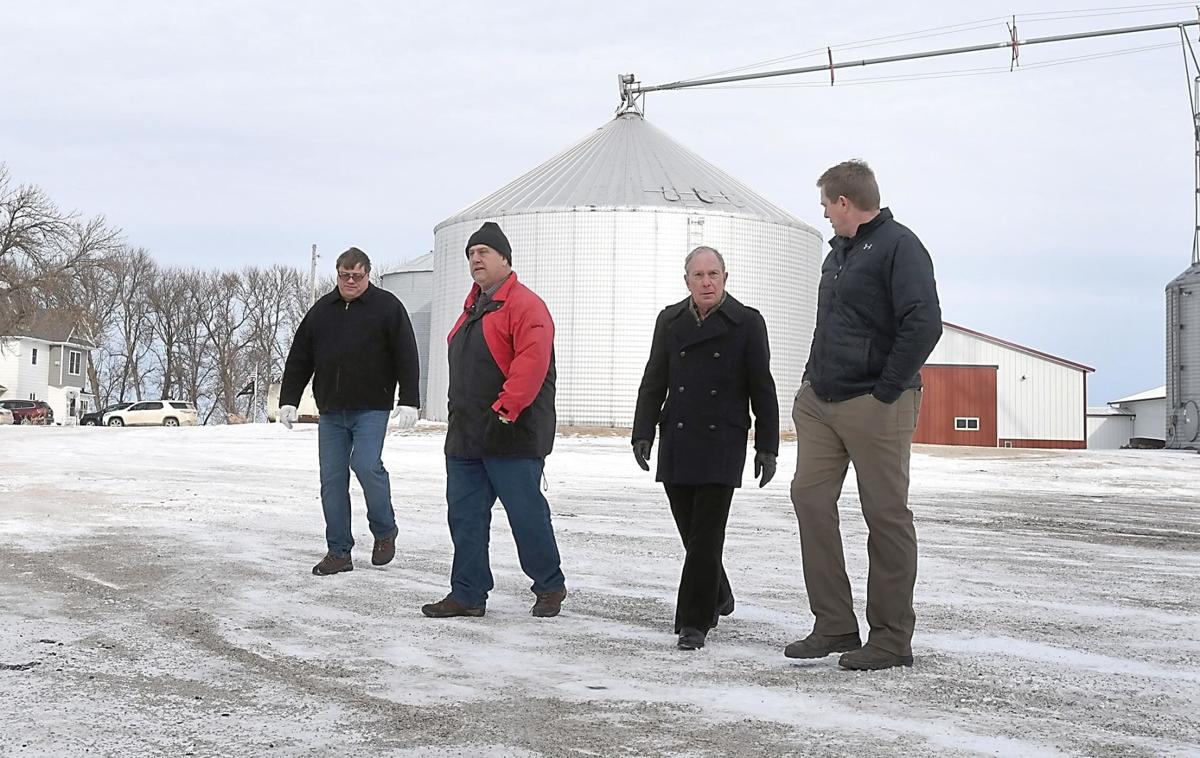 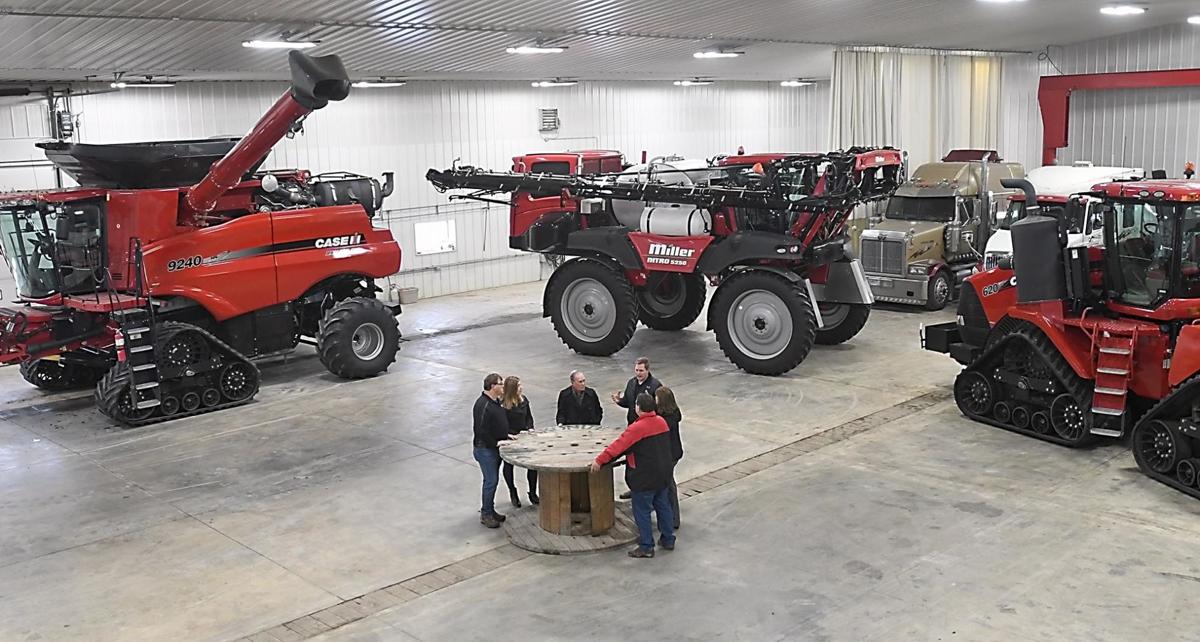 Democratic presidential candidate Michael Bloomberg talks with the Johnson family Wednesday on their farm near Wells.

Darin Johnson and his family talk with Democratic presidential candidate Michael Bloomberg Wednesday on the Johnson farm near Wells, Minn.

Darin Johnson stressed the importance of good broadband service in rural areas, told of the long-term damage from the loss of trade with with China, and gave the former New York City mayor a primer on the high-tech nature of farming and farm machinery.

"Rural broadband is extremely important to us. These machines run on it," Johnson said, pointing to the giant combine, sprayer and tractor parked behind them inside his machine shed.

"Is it fair to say instead of (using) a pitchfork, you're sitting in front of a computer?" Bloomberg asked.

After Johnson told of the shrinking rural population, fewer kids in rural schools and difficulty finding labor, Bloomberg asked him if he hired immigrant labor. Johnson said his family has hired immigrant workers with positive results.

"Some people forget how dependent we are on immigrants for jobs," Bloomberg said.

Johnson said he was the fourth generation to run the farm and he and his wife hope the fifth generation will take over.

"Mostly it's about carrying on the legacy," Johnson said of farmers' hopes for the future.

Johnson, who is also the secretary of the Minnesota Soybean Growers Association, said the trade war with China has been devastating on farm exports, with soybean growers going from exporting 40 million metric tons of soybeans a year — one-third of all beans grown — to exporting virtually none to China in recent years.

"It's been a tough load to bear," Johnson said.

"We produce the safest and most abundant crop in the world," Johnson said, but noted that China can buy farm goods from other countries where labor is much cheaper. Bloomberg said the U.S. can't compete with cheap labor but can best other countries with technology and innovation.

Bloomberg said he is an urban resident who wants to learn more about rural America issues.

"You're the backbone of America and we eat and live based on what you do," Bloomberg said.

The visit — Bloomberg's only stop while in the state — was a highly orchestrated affair with a large contingent of national press on hand, from The New York Times and The Washington Post, to CNN, FOX and Inside Edition.

Bloomberg walked briefly around the farm yard with the Johnson extended family amid a bitter wind as dozens of video and still camera journalists were staged in one area to capture the walk. Then the media went in to the large machine shed while Bloomberg visited with the family in an adjoining room as the media waited for camera lenses to become fog-free after coming in from the cold.

Bloomberg did a short roundtable discussion with the Johnsons, Darin's father, Charlie, his uncle Scott and MSGA Executive Director Joe Smentek. The group was staged in front of three shiny red Case IH pieces of machinery in a well-cleaned shop.

Bloomberg, 77, has been rising in the polls among a crowded field of Democratic contenders. He stood at 5.6 percent support in the latest RealClearPolitics average, putting him in the fifth position, behind the top-tier candidates.

The billionaire is self-funding his campaign and already has spent a staggering $166 million to run TV commercials. He's recently come under attack from rivals who say he's trying to buy the election and for not participating in live debates.

Bloomberg said he doesn't qualify for the debates because the Democratic Party has rules that require candidates to get a certain level of donations, as well as certain polling numbers, to get on the debates. While he would qualify with his poll numbers, Bloomberg said he will not take money from anyone for his campaign.