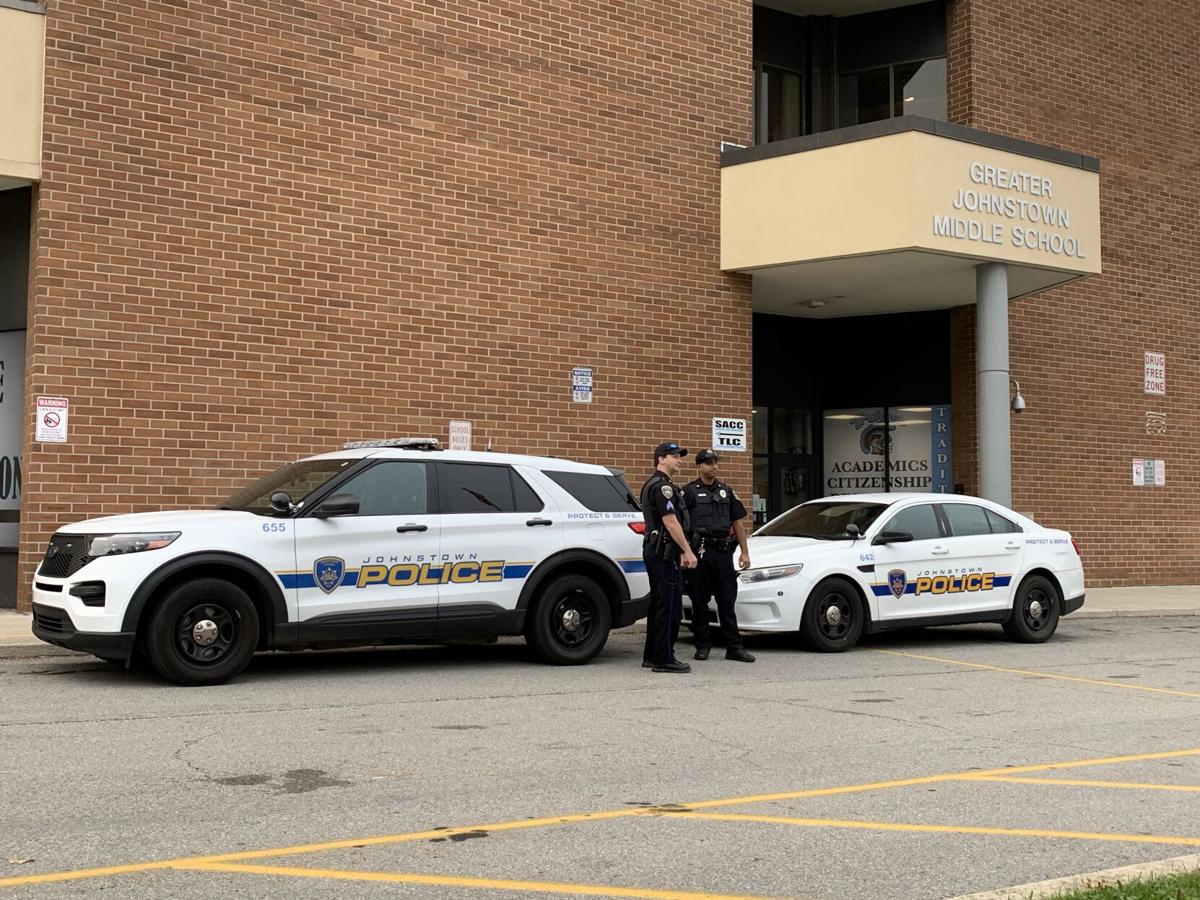 Two Johnstown City Police officers stand outside the Greater Johnstown Middle School on Friday, Oct. 15, 2021, as an extra level of security after a gun threat was reported to district officials the day before. 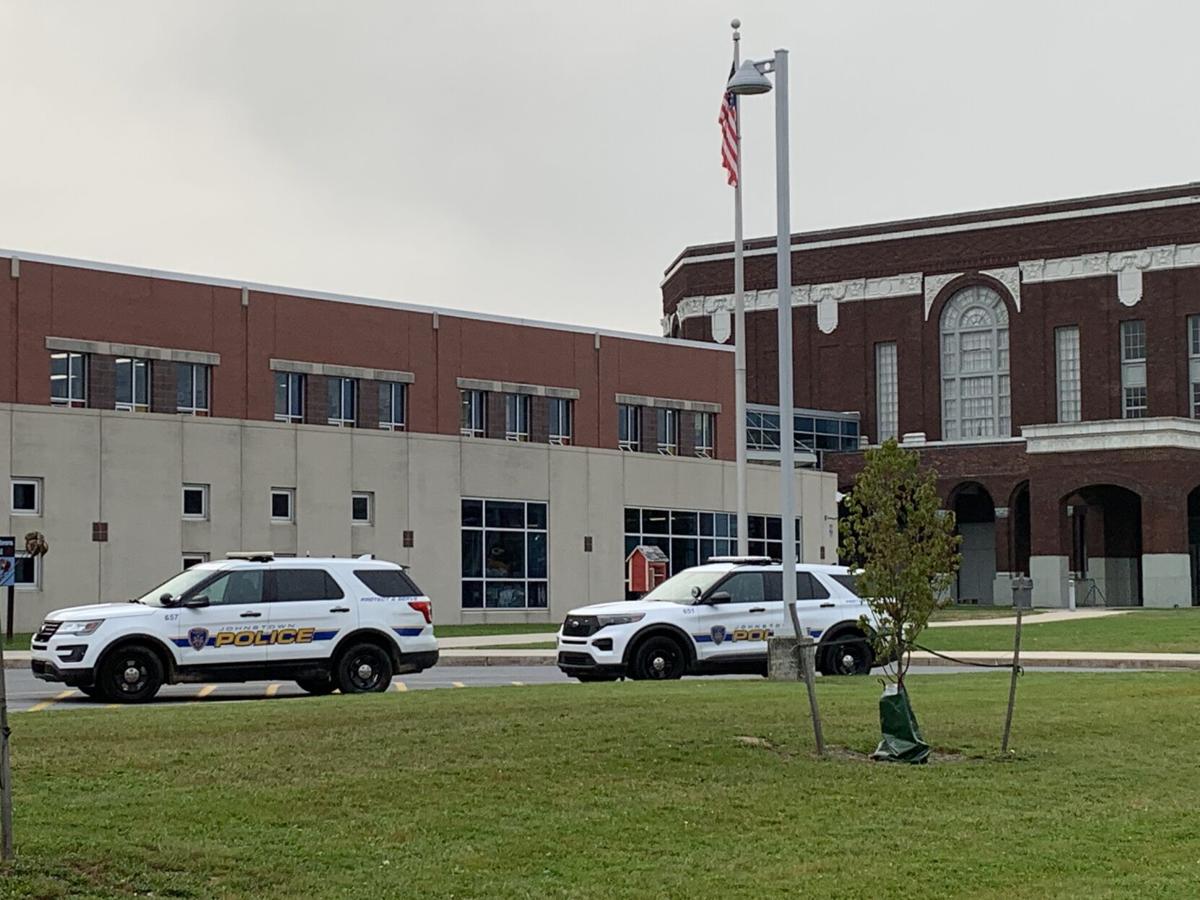 Four Johnstown City Police Officers were sent to the Greater Johnstown High School on Friday, Oct. 15, 2021, to serve as backup after a gun threat was reported to district officials on Thursday, Oct. 14, 2021.

Two Johnstown City Police officers stand outside the Greater Johnstown Middle School on Friday, Oct. 15, 2021, as an extra level of security after a gun threat was reported to district officials the day before.

Four Johnstown City Police Officers were sent to the Greater Johnstown High School on Friday, Oct. 15, 2021, to serve as backup after a gun threat was reported to district officials on Thursday, Oct. 14, 2021.

JOHNSTOWN, Pa. – Amy Arcurio, Greater Johnstown School District superintendent, said Friday that she could say with “a high degree of certainty” the the rumor of a gun threat that spread across social media on Thursday was unsubstantiated.

Students at the high and middle schools were met Friday by officers from the Johnstown Police Department as an added level of security, after district officials were alerted Thursday evening to the possibility that a weapon may be brought to the high school.

Arcurio said it’s believed the threat stemmed from the breakup of two middle school students and an older sibling at the high school getting involved.

“When social media posts threaten the safety of our students and staff, we have to respond immediately,” she said.

Greater Johnstown officials spent Thursday evening speaking with students and parents to trace the threat before sending a districtwide robocall and releasing a statement on Facebook and Twitter.

Milissa Teeter, whose son is a sophomore at Greater Johnstown, said she was hesitant about sending him to school, but after talking to him decided to let him go.

“I am still concerned that this school shooting threat could happen,” she said, “but I’m also a Christian person who won’t live in fear of things like this happening. I am hoping that the school really did step up security ... and I hope they will take further steps to ensure that our children are safe at school.”

There were four city police officers sent to the high school and three to the middle school, in addition to the security guards and school resource officers already at those buildings.

Arcurio said backpack checks were performed as the students arrived at both buildings and they were quickly ushered to their classrooms. She added that the district is always thankful for the support from the Johnstown Police Department.

Crystal Kordell, another district mother with two high school students, decided not to send her children to school on Friday.

“My children are able to do their schooling online because the school provided Chromebooks,” she said. “I would prefer them do a cyber day, home with me, than take even the slightest chance that this is a legitimate threat and go to school.”

Despite that, she is still concerned for others who attended class and went to work.

“I believe (Friday) should have been a cyber day,” Kordell said, “but that’s just my opinion.”

Both mothers were pleased with the district’s response to the threat.

“I believe they are doing the best they can,” Kordell said. “I did see all the police at both schools (Friday) morning, and unloading one bus at a time was a great idea.”

Tyron Patterson watched from his front porch as students filtered past police and into the middle school while waiting with his kindergartner for the bus. He lives across Messenger Street from the building and said, “It’s sad that it’s like this.”

Patterson moved from Westchester County, New York, to Johnstown two years ago for business and has been upset by the violence he’s seen in the city since then.

“There’s a lot of nonsense going on,” he said.

As for the gun threat, he said, it was reckless that a student or students would think they could do that.

Patterson speculated that the issues in the schools start at home, and he also wondered if there’s an element of bullying involved.

Johnstown police Capt. Chad Miller said most threats such as this are under control before they escalate. Units were sent on Friday to support the schools and the school resource officers who work there.

Due to the nature of the case involving juveniles, Miller could not comment on if there was a suspect or if charges would be filed.

Arcurio said she was comfortable about the school day after it started and strongly advised parents, students and community members to report any future threats, concerns or security breaches in the district’s anonymous tip line, SAFE2SAY SOMETHING – 1-844-5-SAYNOW. A mobile app for the service is also available.

This incident is the latest in a series of disturbances in education at Greater Johnstown this school year that included several physical altercations and two high school students allegedly in possession of a pocket knife last month.

“The entire situation this school year is very concerning,” Teeter said. “It seems like things are escalating quickly.”

Arcurio said there were definitely challenges with reintroducing students to the school system after the turbulence caused by the COVID-19 pandemic, but once the learners fell into a routine, the altercations “decreased substantially.”

Still, the Greater Johnstown school board approved the administration to solicit quotes for metal detectors and additional security at October’s meeting.