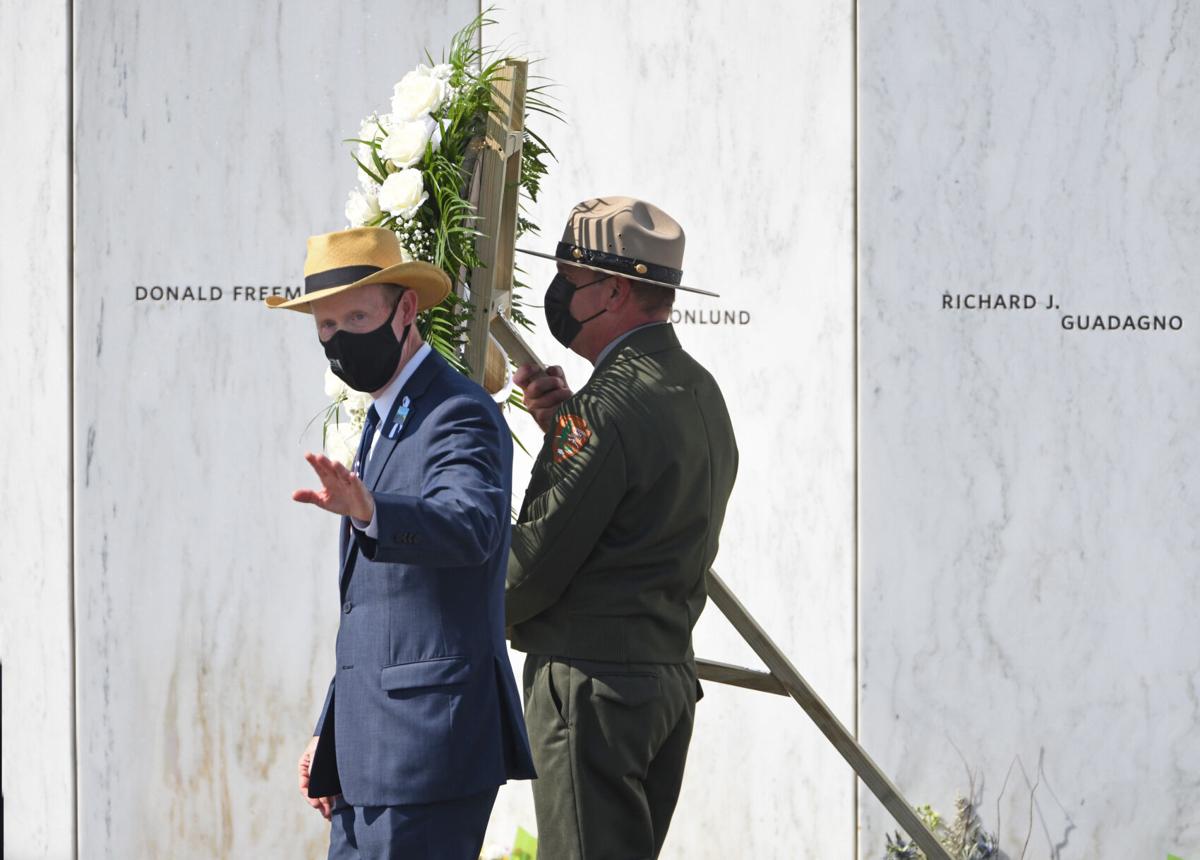 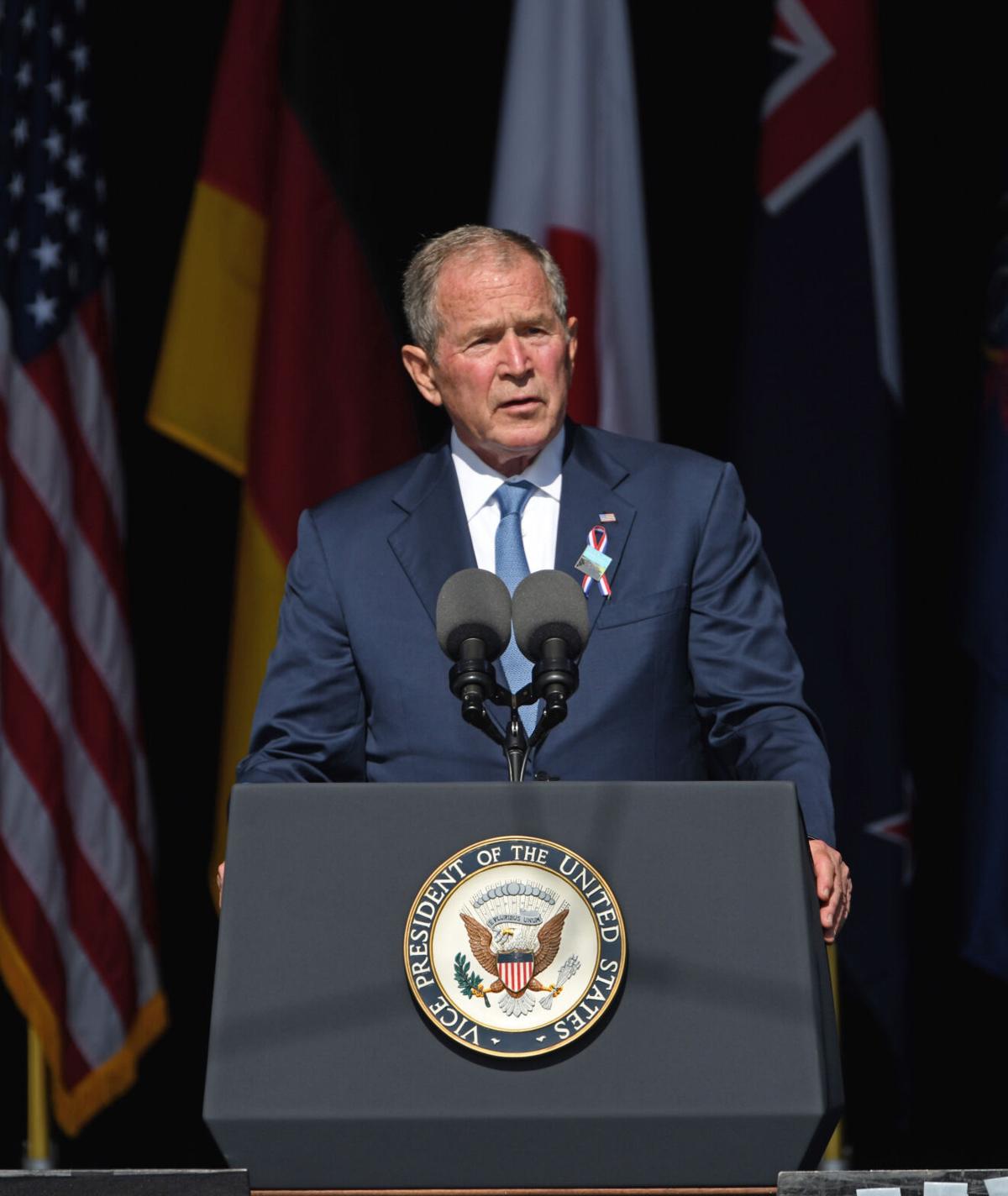 SHANKSVILLE, Pa. – Passengers aboard United Airlines Flight 93 fought the first battle in the Global War on Terrorism when they fought back against four hijackers, causing the plane to crash in Somerset County and preventing it from reaching a target in Washington, D.C.

A full-scale war started a few weeks later, as the United States, along with allies, invaded Afghanistan to hunt down al-Qaida and topple the Taliban.

That conflict lasted for two decades, until the United States pulled out its final troops in recent weeks, resulting in the Taliban quickly regaining control of the country.

On Friday, the first commemoration of the Sept. 11, 2001 attacks in a post-Afghanistan era took place when hundreds gathered at Flight 93 National Memorial for the 20th anniversary.

Gordon Felt, Families of Flight 93 president, said that no matter what transpired in Afghanistan, it did not change what 40 men and women accomplished 20 years ago or the inspiring legacy they left behind.

“Nothing can take away from what loved ones did that morning on one of the darkest days of our nation’s history,” Felt said.

Approximately 2.8 million American military service members spent time in the Iraq and Afghanistan war theaters during the War on Terror.

“After 9/11, millions of brave Americans stepped forward and volunteered to serve in the armed forces,” said former President George W. Bush, who sent troops into Afghanistan and Iraq. “The military measures taken over the last 20 years to pursue dangers at their source have led to debate. But one thing is certain, we owe an assurance to all who have fought in our nation’s most recent battles.

“Let me speak directly to veterans and people in uniform. The call that you pursued was the call of duty that is the noblest that America has to offer. You have shielded your fellow citizens from danger. You have defended the beliefs of this country and advanced the rights of the downtrodden. You have been the face of hope and mercy in dark places. You have been a force for good in the world.”

U.S. Sen. Bob Casey spoke about the “debt of gratitude” owned to service members who “made enormous sacrifices, many with their lives, to keep the United States safe from terrorist attacks.”

Brandon Smith was in the United States Naval Academy when the attacks occurred. He has been in the service ever since, helping stateside.

“We were proud to be part of the war effort,” said Smith, commanding officer at Navy Talent Acquisition Group Pittsburgh. “We’re proud of what we accomplished, and we’re very, very proud and reverent of our shipmates that made that sacrifice. Everyone in some way – whether it was Navy, Army, whether they were on land, whether they were on a ship, whether they flew – everybody supported that war effort in one way or another.”

Unlike Smith, many current service members joined the military after the wars in Afghanistan and Iraq started.

“Almost everyone in the military now, everyone that you see joined after 9/11, and they joined because of what they saw, and they knew they were joining in a time of war, in a time of conflict,” Smith said. “And that sets them apart from generations ahead of them.”

Ross Bratlee, whose longtime partner Lori Guadagno had a brother on Flight 93, said the passengers “fought back” with a common purpose and made the “ultimate sacrifice.”

He would like to see the nation return to that time of unity, comparing it to the recent political divide that included an attack at the U.S. Capitol on Jan. 6, 2021, to disrupt the certification of Joe Biden as the winner of the 2020 presidential election.

“We’ve all got to look out for each other and take care of each other,” Bratlee said. “That’s the thing that affected me a lot after 9/11 how unified the country was. Then we have something like Jan. 6 happen, and we’re divided. There’s a plaque for Flight 93 in the Capitol. To go and do that, it breaks my heart. It really broke my heart.”

Even with the war in Afghanistan concluded, the nation still needs to remain vigilant against the threat of terrorism, according to U.S. Rep. John Joyce, R-Blair, whose 13th Congressional District includes the Flight 93 site.

Standing on the memorial ground where Flight 93 crashed 20 years ago, former President George W. Bush urged America to remember not only the memory of the heroes who fought back in the sky that day – but also their legacy of selflessness that can still help unite the country today.